This is the fourth in a series of “letters” on the ongoing refugee crisis in Europe.

“Call me Simon,” he says. “That’s what the American soldiers used to call me.”

Simon speaks softly and is not prone to exaggeration. He was an economics student when America invaded his country in 2003. He liked school. He got good grades. He had a job lined up after graduation. He was recently married. But the Iraqi economy, which had already been hobbled by decades of Western sanctions, collapsed entirely when the war started, and he found himself unemployed with few prospects. His English was pretty good, so he signed on as an interpreter for the US Army. He was hired in 2007 by Global Linguist Solutions, a subsidiary of DynCorp, one of the largest US defense service contractors.

“It was dangerous work,” says Simon. “Interpreters got killed all the time. If the militias ever recognized you…” his voice trails off. “It was hard. We had to wear bandanas over our faces, and sunglasses and helmets so no one could recognize us. My name tag even said ‘Simon’.”

“Simon,” was the name US troops often gave to their interpreters, or “‘terps,” as they were also called, as a sort of inside joke. Simon says. Get it?

When the US pulled out of Iraq in 2011, Simon tried to apply for a visa that would have allowed him and his wife and their infant daughter to emigrate to the US. Everyone could see what was going to happen after the pullout, he says. “All that is happening in Iraq right now was entirely predictable.”

But when he went to the US embassy to apply for the visa, he was told that he needed an employment verification certificate. So he contacted his former employer, GLS, to request it.

“It’s just this piece of paper,” he says, putting out his hands as though holding onto it. “But [GLS] told me they were no longer operating in my region, and that I would have to go to Baghdad to request it.”

By this time, GLS was in the process of pulling out of Iraq. They had been awarded a $4.6 billion contract by the Department of Defense in 2007, and now they were leaving, their money banked. At considerable personal risk and expense, Simon traveled to Baghdad to request his employment verification.

“The man at the office said they no longer had any of my paperwork. He told me it had all been burned for security reasons.

Simon showed the man his name tag and a copy of his employment contract and pay statements and even photographs of him working with US troops. He had kept all these things, even though possession of them could have gotten him killed by the militia groups that were dividing up Iraq after the US pullout.

He wearily shakes his head and holds up four fingers.

“Four years. This is a joke for four years.”

Problems of this sort are nothing new for GLS, which still operates out of Falls Church, Virginia. Even a cursory internet search reveals numerous instances in which GLS is reported to have shortchanged, mismanaged, or outright defrauded its local Iraqi staff.

Eventually Simon felt so threatened in Iraq that he decided to flee the country. He made his way to Europe, leaving his wife and infant daughter behind in the hope that he could bring them over later.

“It is a dangerous journey,” he says. “I didn’t want to put them through it.”

So he made his way north, through Iraq and Turkey and eventually to the Aegean coast.

“There,” he says, “I paid more than one thousand euro to these,” he searches around in his mind for the right word, “people. These traffickers.”

When it is pointed out to him that you could rent a boat in Turkey for less than half that price, and make your own way across the Aegean Sea, Simon flashes the only sign of anger he has shown all afternoon.

“Yes, you could,” he says. “But the Turkish mafia patrols the coast, looking for us. Any refugees they catch trying to go their own way,” he makes an imaginary gun with his hand and puts an imaginary bullet into his head. “They are protecting their market.”

After crossing the sea in an overcrowded rubber dinghy, Simon spent five days in the back of a truck that was packed so full of refugees that they had to stand the entire time.

“One night they let us out in the woods to walk around for twenty minutes, but only after several people fainted and we started banging on the sides of the truck.”

He looks away and eventually it becomes obvious that he is not going to say anything more about the truck ride.

“I have no idea what route they took driving us, but eventually we wound up in Brussels.”

He plans to file an application for asylum. But there are so many other applicants now that a thousand of them are camped in the park across the street from the Office for Foreigners, waiting while the staff there try to catch up with the backlog. For now, Simon lives in a tent pitched on a low rise in the northern part of the camp, which he shares with three other men.

Since arriving, he has become increasingly concerned. Rumors swirl around the camp. One rumor has it that everyone’s application is being stamped with the words “Dublin Agreement,” a reference to the European Union law that requires any asylum seeker to apply for asylum in the first EU country he or she entered. For many refugees, this could mean being sent back to Greece, where there are already tens of thousands of them waiting to be processed in squalid camps. Another rumor is that anyone coming from Southern or Eastern Iraq, as Simon does, is being immediately sent back, on the assumption, based largely on assurances by Iraqi President Haider al-Abadi, that everything is safe there now. But Simon scoffs at this notion.

So he waits, joining thousands of other refugees all across the continent, a stream of humanity that seems to have no end in sight. He has been here four days already. Even if all goes well and he is granted temporary asylum status, he faces what could be a years-long wait to have his case formally adjudicated. His initial interview for asylum protection is scheduled for tomorrow.

Eventually, he says, he would still like to go to the US.

“I really like America,” he says. When he says this, he does so with utter sincerity. “America is such a great country!” 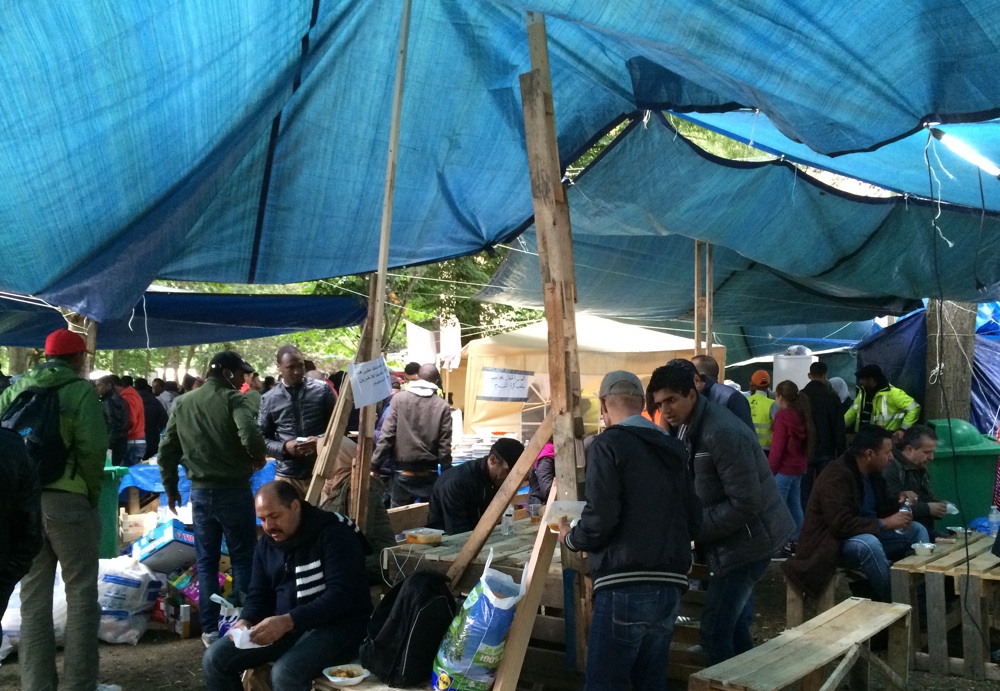