This is the third in a series of “letters” on the ongoing refugee crisis in Europe.

Wooden shipping pallets make modern commerce possible. They’re cheap. They’re perfectly dimensioned to fork-lift shrink-wrapped products into steel shipping containers, like an automated game of three-dimensional Tetris played endlessly across the world’s ports and warehouses. Millions of pallets are right now stacked bearing goods on the decks of freighters and in the backs of trucks. And after they’ve been used a time or two, they’re usually thrown away or burned.

Today, the most pervasive sounds in the refugee camp in the middle of Brussels are the high metal tapping of hammers on pry bars and the low wooden cracking of pallet boards being pried apart. In the tarped-over area that serves as a kitchen and food hall, rebuilt pallets are the tables and chairs, the storage shelves and serving counter. Pallet-wood picnic tables now dot the camp, and still the building continues. A request for pallets posted on Facebook yielded thousands. It’s satisfying, say the volunteers who do the work. Satisfying to tear apart out-usefulled things, even more so to build them anew. If whole buildings were to suddenly rise, each made entirely from pallet wood, no one in the camp would be much surprised.

For the past ten days the volunteers organized themselves online and cobbled together the camp, making things up as they went along, responding to what many of them see as the utter failure of their political class to deal with the mounting crisis. Now they are consolidating, creating an infrastructure to match their vision of a Europe that welcomes the dispossessed, rather than shunning them. There is a kitchen serving hot meals. There is a mobile phone charging station. There is a school and a small, open-air movie theater. There are plans to tap into the municipal water and sewage systems. More than simply a place to house refugees while they wait to register an asylum claim, the camp is quickly becoming a monument to a vision. It’s becoming a movement.

Despite that vision, the camp often feels like a high-proof distillation of reality, rather than any sort of idealized version of it. It’s a place where light and dark, generosity and greed exist side by side. Today, for example, a group of volunteers in yellow visibility vests is clearing gang members out of tents. The gangs have been stealing donated goods, which they then stash in the tents, waiting to move it out to nearby cars and vans under cover of darkness and sell it in thrift shops and flea markets. Once such a tent has been identified, ten or twelve volunteers surround it and ask the occupant, if there is an occupant, to leave. Then they empty it out, removing the contents back to the donation areas. It’s an exercise in miniature of raw power. Usually it doesn’t take much persuasion, but it also doesn’t seem to be a job many of the volunteers relish. They tend to be idealists, after all.

Because they are waiting to be registered, the refugees in the camp exist in a world outside the official legal system. Having yet to register, they are not yet asylum seekers. They are not immigrants. They are not temporary workers or students. Technically, they are what is known in French speaking countries as les sans papiers.Illegal immigrants. For years, organized groups of sans papiers have been agitating for regularization, for the granting of residence permits and working rights. They have taken over (or in many cases been invited into) churches and other buildings. They have staged hunger strikes. They have drawn attention to what they say is the sort of institutional racism that keeps many immigrants in Europe excluded from mainstream society, often for multiple generations. And herein lies the political lightning rod this refugee crisis presents to the European political establishment. Exactly as they have done in the United States, politicians here have staked out territory all over the immigration debate.

Unsurprisingly, perhaps, a group of sans papiers—or, more precisely, a group claiming to be fighting for the rights of the sans papier—have set up an area prominently within the camp and plastered it with literature. Sitting with the group, a man who says he is from Morocco talks to anyone who will listen.

“Imagine” he says, “living like the people in this camp, but there is not attention paid to you, no TV cameras, and you’re destined to live like this for your whole life.”

“Are you sans papiers, then?” someone asks.

The television cameras that were ubiquitous have mostly gone now, with only a single crew left prowling for stories. As the press thinned, so did much of the carnival atmosphere from last week, when so many people, refugees and volunteers alike, simply seemed eager to get themselves onto television. All day Sunday one man wore a sign that said, in English, “I’m Desperate, Hug Me.” Another, seemingly more heartfelt, walked around for hours with a sign expressing gratitude to Belgium.

But with the carnival atmosphere came the rumors, the chaos. It was virtually impossible to get a firm estimate of the number of people sheltering each night, nor of the number of people arriving each day. The camp’s borders are entirely porous, delineated with only tape. Attempts are now made to register arrivals and departures, but the numbers—seven hundred and fifty now in place, one hundred arrivals each day—are still rough estimates. Last week, one rumor held that the federal government was going to try to clear the park. Another was that the Belgian army was poised to take over. One refugee says he has heard that Syrian intelligence operatives are present in the camp, keeping tabs.

The latest rumor is that the kitchen has run out of food. It’s not true, but it’s enough to cause a passing panic. Volunteers stand on the counter top and try to assure an agitated group of fifty hungry men that more food is being prepared. Picture a different country, with different resources, and it’s easy to see how the situation could quickly deteriorate.

One rumor proved true this past Monday when, in one of the buildings next to the park, called the World Trade Center, the federal government opened a five-hundred bed sleeping facility. Only fourteen people took advantage of it, which prompted Theo Francken, Belgium’s Secretary for Asylum and Migration, to comment, “They obviously don’t want it. The tent camp is apparently more comfortable. Perhaps we should have offered them a hotel?”

But even a cursory visit to the camp reveals the reasons why refugees might be hesitant to move into the shelter. For one thing, the WTC shelter is available only at night, meaning anyone sleeping in it would have to pack up their meager belingings and risk losing their tent space. For another, there is a community, of a sort, in the park now, support and camaraderie. In part, Theo Francken was right: the park is more comfortable. But his ignorance reflects another, darker side of the crises playing out across Europe. On Tuesday a journalist with a Hungarian television station was filmed kicking and tripping migrants, including a young girl. The Facebook page of the Plateforme Soutien, while filled overwhelmingly with messages of support and encouragement, is also marred by offers to donate pork to the mostly muslim refugees, and crude jokes about women in Hijabs.

“What are you going to do?” says one volunteer of the internet commenters. “It’s the internet. It’s full of assholes.”

Which is not to say there aren’t problems at the camp, too. Security and sanitation remain ongoing concerns. The presence of so many immigrants threatens to provoke a backlash against them, but this is an issue across Europe, not only in Belgium. And the core group of volunteers are exhausted. Many of them have been here every day since it started. Some have slept on site. They’re tired and often seem stretched thin. Yet overwhelmingly they are staying positive.

“We are inspired by these people who have come,” says one volunteer, a doctor from Leuven. “We’re giving to them, but they’re also giving to us.”

Then he tells the story of a man who arrived in the camp over the weekend, an English teacher from Syria. He had been crossing the Aegean Sea in a packed boat when it sank. He swam all night before eventually being picked up.

“When you’re stuck in the water and you don’t know where you are, what can you do?” he said. “You keep swimming.”

The camp is a place that alternately reinforces cynicism and removes all capacity for it.

“What are the cynics and the racists in the face of all this?” says another volunteer. “They’re nothing. I’m proud of what we’re doing here.”

After she finishes sorting piles of donated clothes, she’s planning to go over to the other side of the camp, pick up a hammer, and help the people who are trying to turn old pallets into a village. 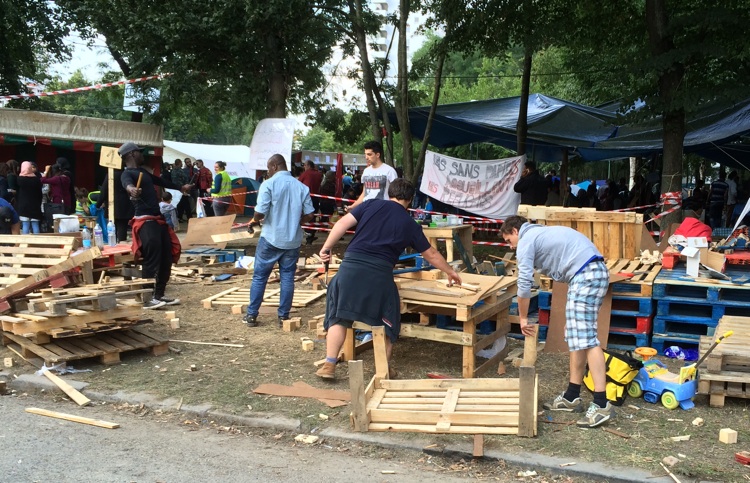