This is the first in a series of “letters” on the ongoing refugee crisis in Europe.

This is a refugee camp. It’s a bright, sunny morning and the camp is just visible through the trees, with splotches of the reds and greens and blues of recreational dome tents and tarpaulins scattered among the tall brown tree trunks.  The refugee camp is located in a lightly wooded park in the center of Brussels, surrounded by glass-and-steel skyscrapers and a three-building apartment block. There’s a football pitch. There’s a basketball court. The park looks and feels a bit like Bryant Park, in Manhattan, except that it’s a little run-down and there is no skating rink. Also, it’s a refugee camp. That’s impossible! one might think. There hasn’t been a refugee camp in a major European city since, when? The Second World War, right? And yet here it is. 2015. A refugee camp in the middle of Brussels.

From a distance, the refugee camp in the middle of Brussels looks a little bit like a campground. It’s wooded. There are tents. There are no open campfires, but that’s true of lots of campgrounds in Europe. A closer look at this particular campground, though, reveals piles of clothes in the grass, and tarps stretched over clothes lines, and large, military looking tents with the words Médecins du Monde and Médecins Sans Frontières printed on their sides and lots of people, men mostly, though not exclusively, standing around as though waiting for something. A small group of women and children bunch together, in the middle of the camp, surrounded by mingling men.

There has been some debate, lately, about whether the refugees living in the refugee camp in the middle of Brussels are actually refugees, or if maybe they should be referred to as migrants. The British and American press tend to call them migrants. Mostly, that’s because migrants can be dealt with through existing bureaucratic structures. Migrants are safe. Migrants are business as usual. But refugees constitute an emergency. The French press knows this is an emergency. The French press calls them refugees. Migrants seek opportunity. Refugees flee wars. These people are clearly refugees.

Belgium doesn’t really have a refugee problem. Italy has a refugee problem. Greece has a refugee problem. Calais has a refugee problem. Hungary likes to think that it has a refugee problem, except that it doesn’t, because none of the refugees really want to stay in Hungary since, as many of them will tell you if you ask, Hungary sucks. Belgium doesn’t really have a refugee problem, either. Belgium, typically, has an administrative problem. A bureaucratic problem. The problem is that the Office for Foreigners, which is where all the refugees who make it to Belgium have to go to register after they arrive, in hopes of securing asylum status and its accompanying promise of residence permission and housing subsidies and perhaps even language classes and job training, or, as you or I would call it, subsistence, announced this week that they would process no more than 250 applications per day. That’s as many as can possibly be handled over the course of a normal workday, it was said. It’s understandable, really. The Office for Foreigners is small. The staff are bureaucrats. They’re overwhelmed. There are probably union rules involved. Expecting anything more from them is like turning up at the Department of Motor Vehicles and expecting mercy. Still, the fact that the Foreign Office will only process 250 refugees a day means that 1000 refugees are camped in the refugee camp in the park across the street from their offices, waiting their turn.

As far as refugee camps go, it’s not too bad. People are smiling. They’re eating. They’re smoking cigarettes. They’re searching through piles of clothing for something their size and style. Families are huddled around their tents, talking, eating, talking some more. An old man plays a recorder. A volunteer reads a book to two kids, one of whom does not seem that into it. Someone finds a football–someone always finds a football–and several of the guys begin kicking it around. One of the volunteers, a girl in a yellow vest, intercepts the ball and begins kicking it, too. The boys seem skeptical at first, but then she nutmegs one of them, and in no time she is sending in crosses that earn respect.

Besides the refugees waiting for something and the journalists, there are also some other people. Some of these people wear the fluorescent yellow visibility vests that many cyclists here wear, but with name tags duct taped to their chests, and they have walkie-talkies and clipboards and they stride purposefully around and will tell newcomers to the camp how they can be helpful, if said newcomer is so inclined, and they will tell the many people who show up with boxes and garbage bags of food and clothing and medicine where to put and how to arrange those items and they appear to know what they are talking about. How nice, one might be tempted to think, that there are trained people here to oversee the running of this refugee camp so incongruously located in the center of Brussels. How good that the operation is being run by professionals.

Except that they are not professionals. Most of these people have never been anywhere near a refugee camp in their lives. They are students and housewives and actors and waitresses and managers and electricians. They are members of groups that have been organized via social media, groups with names like Plateforme Citoyenne de Soutien aux Réfugiés Bruxelles and Community Support for Refugees in Belgium, groups that did not even exist a week ago, but which now have tens of thousands of members on Facebook. Absent any official government coordination of the situation, they are the only thing constituting an authority in the camp. These people, all of them volunteers, are some of the nicest, friendliest people one could ever hope to meet, especially in Belgium, which is not exactly known for its niceness and friendliness. But a simple inquiry reveals, underneath that niceness and friendliness, an unmistakable anger.

Someone else, overhearing the conversation, says, “I’m here because I’ve spent the past ten years feeling powerless, and I’m tired of it.”

“I’m here,” says someone else, “because the only way to defeat inhumanity is with humanity.”

Then everyone stops to look at something. The television cameras have all been trained on what looks to be some major event around a small folding table in the middle of the camp. It’s impossible to see what it is though, because so many cameras have stopped to video it. No one can see past the large cameras, and everyone’s curiosity is piqued. Finally, a different angle, a different view, and someone realizes that all the cameras, in their hyper-vigilent pursuit of symbolic moments, are recording footage of soup being ladled from a pot into a bowl. This is what passes for drama in what is essentially a large, open-air waiting room. When a child begins crying in his mother’s arms, the cameras click like paparazzi snapping glimpses of royal children.

It’s often mentioned at the refugee camp in the middle of Brussels that the refugee camp in the middle of Brussels is only one of hundreds of refugee camps all over Europe, most of them offering their refugees far worse conditions than this one, as at Calais, and Lesbos, and Keleti Station. What largely goes unsaid here is that the refugees who have made it this far are lucky. What goes unsaid is that some in government claim the problem is that conditions are simply too good here, that the refugees have it easy, and need to be discouraged from coming in the first place. Just this week David Cameron said that letting in more asylum seekers would do nothing to address the underlying problems driving the migration. And he’s right. The underlying problems driving migration are war and repression and economic ruin and the Roman-arena fascist freak show that is ISIS. The underlying problems will take a generation, or more, to sort out. But the immediate problem? The immediate problem is that right now there are a thousand refugees camped out at a refugee camp at a park in the middle of Brussels, and hundreds of thousands more in other camps around the continent. Admitting more refugees will do everything to resolve that.

Eventually one of the volunteers removes his bright yellow vest and yawns and stretches. It’s getting late, he says. As it often does in Belgium, the weather has shifted. The sky has clouded over. There’s a chill in the air. One of the volunteers has begun shaking with cold and fatigue, and someone offers hand warmers and a jacket. A few volunteers have offered to stay in the park overnight, pitching their tents alongside those of the refugees. But most of them are going home, now. They’re cold. They’re tired. They’re hungry. And by now it has begun to rain. 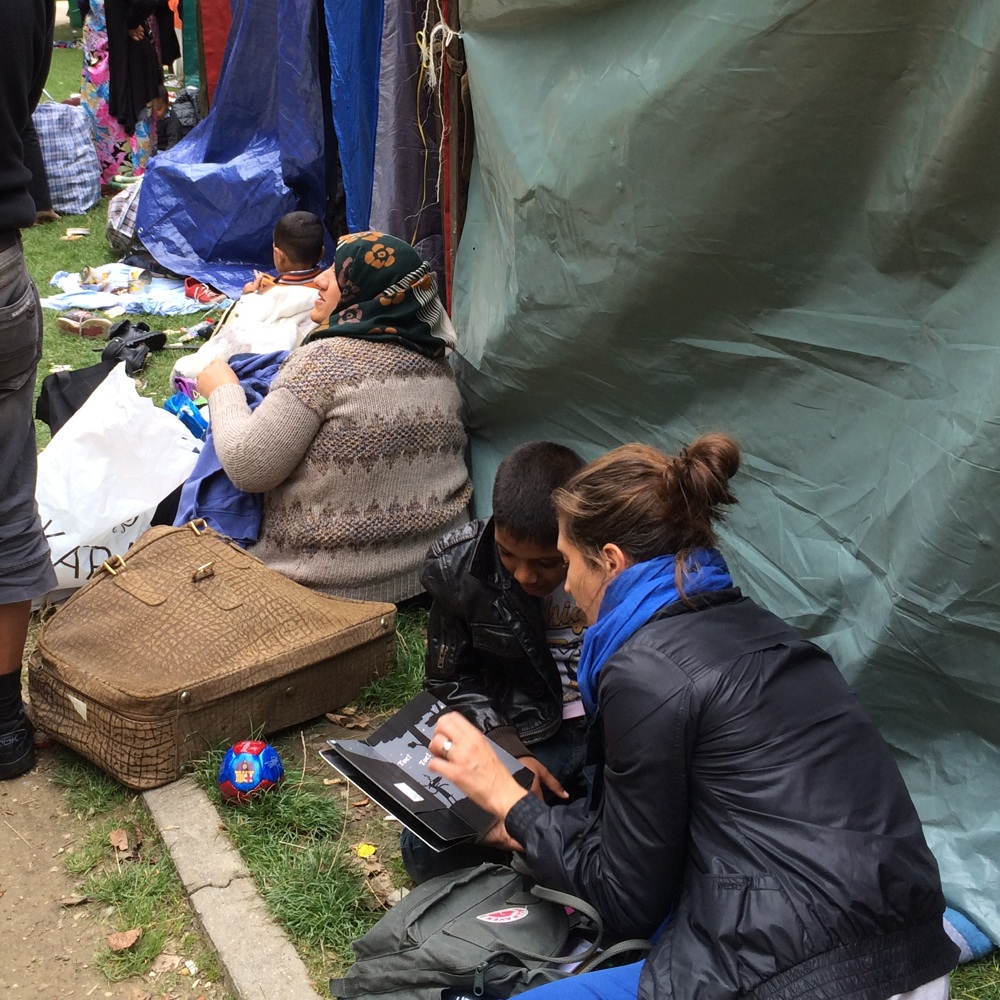