The refugee camp in the center of Brussels is nearly gone. The police have formed a cordon and are making preparations to clear it by force, should that prove necessary. They have erected a six-foot-tall wire fence around the entire park and are inviting the fifty or so people left inside the fence to leave. Outside the fence, a small crowd has gathered to watch the proceedings. From there, everyone can see how this is going to go. It’s almost over.

Inside the fence is a group of several dozen people who are called different things by different people, the words used saying as much about the categorizers as the categorized. They are homeless people, the at-risk, the sans-abri in French. They are the undocumented, the wrong-documented, the illegal immigrants, the aliens, the étrangers en situation irrégulière, the clandestin. They are the sans-papier. They have come to the park, and stayed in the park, to protest their situation, to demand regularization. Naturalization. Legalization. Amnesty. They have been present in the park from the beginning, and are vowing not to leave. The police are there to make sure they do.

In truth, the situation in the park had become untenable weeks ago. The onset of the Belgian rains had sparked an increase in the number of bronchial infections being treated in the Médecins du Monde facility. Rats had been spotted raiding the kitchen. The sans-papier had taken over a large area in the center of the camp. Prostitutes had begun strolling its fringes. There were at least two reports of rape.

Early last week, the Plateforme Citoyenne, the Facebook-organized group of volunteers which had set up the camp and had been running it since its inception, suddenly declared they were leaving. In a statement, the group said that it no longer wished to act as an “alibi for government inaction.” The statement said that nearby warehouse space had been acquired, into which the Plateforme’s operations were being moved.

The Plateforme had originally been created with a flat organizational structure that encouraged broad citizen participation. But over time it had become increasingly hierarchical, as a core group of volunteers spent vastly more time on the ground in the park and therefore commanded greater sway over the group’s actions. The decision to abandon the camp was made by a tiny clutch of insiders. Their announcement sparked an immediate backlash that threatened to split the group, with many volunteers declaring their intention to stay. It seemed to them as if the Plateforme was trying to become a real NGO, with office space and facilities and a distinct corporate culture, like Google for refugees. They smelled a sellout.

It had been obvious for some time that the city was planning to clear the camp, and may have given the Plateforme an ultimatum. Some even suspected that the warehouse space had been a quid-pro-quo in return for abandoning the park. The Plateforme, for its part, seemed eager to assure everyone that it was not giving up the fight, merely moving to better quarters. All this week a large whiteboard sat outside the administrative tent, reading, in French, Dutch, English and Arabic, “We don’t give up! We move…”

The effort to reduce the camp’s population began almost as soon as the camp itself began. From the start, as many women and children as could be accommodated were taken from the camp and housed in shelters, many run by Caritas, a Catholic relief charity. Additionally, five hundred beds were opened in a nearby office building, this number gradually increasing to about seven hundred and fifty and facilities added: showers, food. Together with the onset of the weather, these efforts gradually reduced the camp’s population from a high of over a thousand to about two hundred and fifty by early last week.

Beyond the health and safety concerns, there were security concerns. Access to the camp in the park was entirely unregulated, allowing anyone and everyone to come and go with ease. But to get into one of the shelters, you needed a paper given out by the Office for Foreigners when you registered there. This ensured that only “legitimate” refugees had access to the shelters.

Inside the fence, the camp’s population now includes about a dozen people who recently traveled to Europe in the mass migration from Iraq and Syria and Afghanistan, but whose asylum claims have been denied by the Belgian government. They began their journeys as refugees, arrived in Belgium as refugees, but with a single administrative act, a judgement rendered by a bureaucrat, they are now categorized, without recourse, as illegal immigrants. Sans-papiers. They are not permitted to work. They are not entitled to social benefits. From a legal perspective, they are non-entities. They do not exist. They join a substantial class of individuals in Belgium so situated, sometimes for multiple generations.

The refugee crisis has always been highlighted by a long-running tension between humanity and bureaucracy. Bureaucracies thrive on categorization, definition, and certainty, but the camp was begun in a display compassion, tolerance, and creativity. Humanity provided the foundational impulse behind the camp, but needed to invent a bureaucracy to administer it. While it’s probably an oversimplification to say that humanity created the camp and bureaucracy destroyed it, it’s also not too far from the truth.

Two days after the Plateforme announced they were leaving, they began to do so, putting out a call for two hundred volunteers to aid the effort. All day Tuesday lines of yellow-vested volunteers shuttled back and forth between the park and the newly acquired warehouse beside the canal. That night only a hundred and fifty people slept in the park. The next night it was down to about a hundred. Thursday morning a pair of bulldozers showed up and unceremoniously razed the kitchen, which had been painstakingly built over the course of the previous month from recycled palette wood. By noon nothing was left of the kitchen but two dumpsters loaded with debris, donated refrigerators lying on their sides beside them.

This morning a six-foot-high metal fence was erected around the entire park and everyone in it, save an eight foot gap that served as both an exit and an entrance. The park feels intimidating now, surrounded by a fence and a police cordon. It feels like a place you don’t want to go into. It feels like an arena, or a firing range, someplace better observed from a safe distance.

You have to feel for the police, especially in Brussels. More so than in other European capitals, they suffer abuse, and occasionally projectiles, hurled at them by innumerable protests and demonstrations. Just a week ago, dairy farmers from all over Europe converged on Brussels, using their tractors to clog the roads, hurling raw eggs at police in riot gear, and using combine harvesters to spray hay all over the ranks of policemen before setting the hay on fire. All this to protest low milk prices. A week later, the police will be pelted with paving stones and fight running street battles with a group of anarchists that infiltrates an anti-austerity rally.

Now, in the park, someone has found a megaphone and begins using it to shout in the faces of the police. A group of fifty holdouts marches over to the fence that separates them from the police cordon and begins singing protest songs. It has become a demonstration. The megaphone goes dead, so they continue chanting without it. Then someone gets it working again and the megaphone squawks to life. The songs begin anew, the chanting, the shouting, everyone trying to get everyone else fired up.

The operation to clear the park is an impressive example of restraint and de-escalation. None of the police officers is armed with anything more lethal than pepper spray, and even this is never used. Two canine units patrol at a distance, careful not to incite anyone by coming too close. At six o’clock the chief of police wanders into the enclosed area and speaks with the holdouts, who now number about fifty. In threes and fours they wander over and pick up their bags and file out through the opening left in the wire fence. For most of them, arrest would mean almost instant deportation. Unlike the dairy farmers, who wield the political power of their union, the sans-papiers are caught between their anger and their legal non-existence.

The chief of police spends more than an hour talking to the last few dozen people in the park. Person by person they begin picking up sacks and duffels and plastic shopping bags and filing out, leaving behind several tents and a plywood shack that last week housed Sans-Papiers Freedom Radio. The moment they’re out of the fence, two massive dump trucks roll in and city maintenance workers begin filling them with detritus.

“The park will be like new come morning,” says one of the police officers in the cordon.

By seven thirty it’s over. A place that a week ago contained hundreds of tents housing more than a thousand migrants, administrative offices, a medical facility, a radio station, storage areas and a working kitchen, are nothing more than trees, newly-planted grass, a packed stone path, a football pitch, and pigeons.

Outside the fence, the sans-papier and the homeless, the last group of holdouts, watches the dismantling of the camp with an air of resignation. The camp had been in the news nearly everyday for the past month. It had provided them with their own platform from which to air their grievances. For as long as the camp existed, they existed. Now, the camp no longer exists.

Someone in the group seems to remember he is holding a megaphone and flicks it on. He raises it to his lips and begins chanting. He is quickly joined by the rest. The sans-papier are here to stay. Someone unfurls a banner and it is held up in front of the group. It says “The sans-papier continue the fight.”

The police chief comes over and tells them they have to move along, now. It’s all over, he says. Time to go. As they begin moving away en masse, the megaphone strikes up a song, and they all join in. It’s another protest number. It echos from the surrounding high rises, follows them as they march down the street, lingers behind them as they head reluctantly away from the park, singing their song into the night. 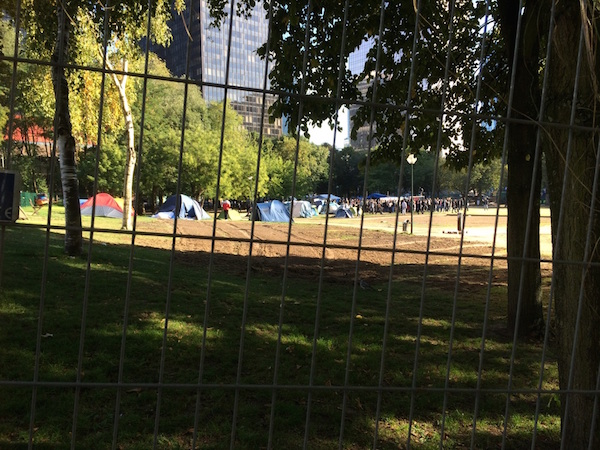