This is the second in a series of “letters” on the ongoing refugee crisis in Europe.

It’s Sunday afternoon, which means that it’s time for a General Assembly. The largest and best organized group operating in the refugee camp in Brussels is called the Plateforme Citoyenne de Soutien aux Réfugiés Bruxelles. The Plateforme is so well organized that even though they have not yet been in existence for a week, they are already holding a plenary. There were some questions as to the time and place of the meeting, finding a space large enough, whether to hold it in the refugee camp itself, or at some other location, but by four o’clock on Sunday afternoon these questions are resolved, and nearly a thousand people descend on the large plaza in front of the Gare du Nord, which is about a block from the camp.

Signs have been placed around the plaza. A speaker system has been set up to amplify announcements. Accommodations are made for Dutch and English speakers, but the working language is French. Within half an hour, the thousand people–who, it must be remembered, are not professional relief workers, but novice volunteers–have broken into working groups. There’s a working group for logistics and a working group for mobilization and a working group for cooking. Each volunteer chooses which working group he or she wishes to join. This being Brussels, which is home to most of the EU governing structure, the best attended working groups appear to be “lobbying” and “communication.” The least attended appears to be “finance,” even though this word has been helpfully translated into English on the signs as “Money.” These are smart people, after all. They know a mire when they see one.

The working groups are just getting down to business when the speakers crackle to life. It has been suggested that an additional working group be formed, this one on “Psychology.” Many of the refugees have had difficult journeys, it is assumed. Efforts should be launched for their counseling.

One block away, the refugee camp has grown dramatically. Last Tuesday, the camp consisted of fifteen tents in the park in front of the Office for Foreigners. By Thursday, there were more than a hundred tents, mostly the thin, summertime dome tents families use to go camping. On Friday, three people from Médecins Sans Frontières, which is not even officially working at the camp, hauled in forty eight heavy duty emergency tents, with thermally insulated floors and walls and internal partitions. Within an hour they had taught available volunteers how to set them up. By nightfall on Friday the park was beginning to look less like a recreational campground and more like a proper refugee camp, the kind one might see on television.

Today the changes are even more dramatic. A rough estimate calculates nearly four hundred tents present in the park, in some areas pitched so closely together that it is impossible to walk between them. Large tarpaulins are tied together and strung between trees. Wooden pallets are being pried apart and turned into everything: tables and benches, shelves, counter tops. Pallet boards have been fastened six meters end-to-end and used to prop up the tarps, like the pole in a circus tent. Propane stoves have been set up. Canvas lean-tos, which last week had been used as shelters, now house a volunteer information office, a refugee reception area, and a logistics and coordination center.

The refugees keep coming. One guess holds that there are between one hundred and three hundred new arrivals each day. They simply appear, no one seems to know how or whence, materializing on the street with the entirety of their worldly possessions in bags on their backs. There are no formal intake procedures, and very little in the way of registration, aside from a list Médecins du Monde keeps detailing those who have received medical attention. Estimates of the total number of people in the camp vary, from seven hundred and fifty on the low end to fifteen hundred on the high end.

Back in the plaza, the working groups have outlined plans for a lobbying strategy and a focused communications effort. The long-term issues involved in the feeding and sanitation of a refugee camp have been discussed, and mitigation measures planned. The finance working group has run into some trouble while trying to work out how to get pocket money to refugees while not running afoul of accounting regulations. The Plateforme isn’t a formal charitable organization, after all. It’s just a bunch of people who met up on Facebook.

Most of Brussels carries on about its regular business, largely oblivious to what’s going on in the park, aside from the occasional news report. But the existence of the refugee camp seems to have energized the more charitably inclined residents of Brussels, and of Europe more broadly. Public opinion seems to have tipped. Germany has announced that it is prepared to take in as many as eight hundred thousands new immigrants. Juha Sipila, the President of Finland, has offered the use of his home to shelter refugees. The Pope has opened the Vatican to them. Groups of Germans have begun gathering in train stations, cheering refugees who make it in, like marathoners crossing a finish line.

Entirely by coincidence, the Plateforme’s General Assembly in the plaza has coincided with the annual staging of the Brussels Color Run. People covered in what looks like vibrant chalk dust filter through the busily engaged working groups like pixies buzzing a church service. Some of them stop and begin chatting with the Plateforme volunteers. A few sit down on the ground. It seems like perhaps they might be interested in helping out.

At the camp a school has been set up, and volunteers teach children French and English and Dutch and play games and paint faces. Children play football for hours and chase each other around the camp. Even grown men have begun to play.

The donations have been organized. What had once been piles of shoes and sweaters and trousers strewn on the ground are now carefully sorted and labeled and placed in tents behind fences, where people queue to request needed items, rather than scavenging around through the piles. Donated food is available everywhere. Kebabs and flatbread and baguettes and bottled water. The Al Islam charity brings hundreds of halal dinners of chicken and rice every day. Local mosques provide huge vats of couscous and mutton. Word has gone out that donations are no longer needed. Volunteers line up at the volunteer registration office, even when they are told that volunteering, at this point, means donning rubber gloves and cleaning out the toilets. The storage tents at the camp are full. The warehouses of charitable organizations around Belgium are full. The basements of churches and community centers are full.

Underneath the joy and the plenty, tension lurks. The same energy and altruism that has energized volunteers and comforted refugees is now being bent toward other purposes. People who have not yet heard that donations are no longer needed are still donating. They drive in from The Netherlands, from Germany, from Northern France. They rent moving trucks and fill them with donations. In Brussels, local gangs are alert to the excess, and have begun lurking at the edges of the camp, swarming the cars and trucks when they stop, hauling off their contents to resell at flea markets and night shops. Volunteers in yellow vests are sent out to shoo them away. Always adaptable, some of the gang members go to the volunteer booth and obtain yellow vests of their own.

In another part of the camp a group of volunteers gathers around a small tent. There was a boy in the tent yesterday, a teenager who had arrived at the camp alone, without parents or siblings, who would speak to no one and who laid in the tent all day crying. Today the tent is empty and stinks of urine, and no one knows where to boy is. Other volunteers circulate a picture of a child who has gone missing, her mother frantic.

There is so much food around, and it is so freely available, that the city’s homeless population has begun migrating to the camp. Groups of men with red faces and cold, bloodshot eyes sit on the low hill overlooking the tents and swill beer. Marijuana smoke wafts through the groups of kids playing football. The sign at the entrance to the camp that directed people to the Plateforme’s Facebook page has been replaced by one that says “Slaughter Capitalism.” A group of undocumented migrants, les sans papiers, teaches the refugee kids protest songs. The edges are blurring. Refugees are now offering food to the homeless people. It’s becoming difficult to tell who is a refugee, who is a second- or third-generation immigrant, who is homeless, who is a gang member, who is a volunteer. The camp is quickly becoming a gathering point for anyone who can fit the sum total of their worldly possessions into a trash bag.

Despite all this, the mood in the camp is generally upbeat. Occasionally, in places, it is even joyous. The recent arrivals are still nervous, still distrusting, still scared. They sit exhausted in the dust and look off into the middle distance. They gather their possessions around them in trash bags and stare death at anyone who approaches. But those who have been here for a few days have begun to lighten. There is food. There is shelter. There is singing and dancing, and even a drum to beat out a rhythm. The refugees are beginning to resemble a tribe that is celebrating its arrival in the promised land. One volunteer observes that it is all starting to feel a little bit like Glastonbury. 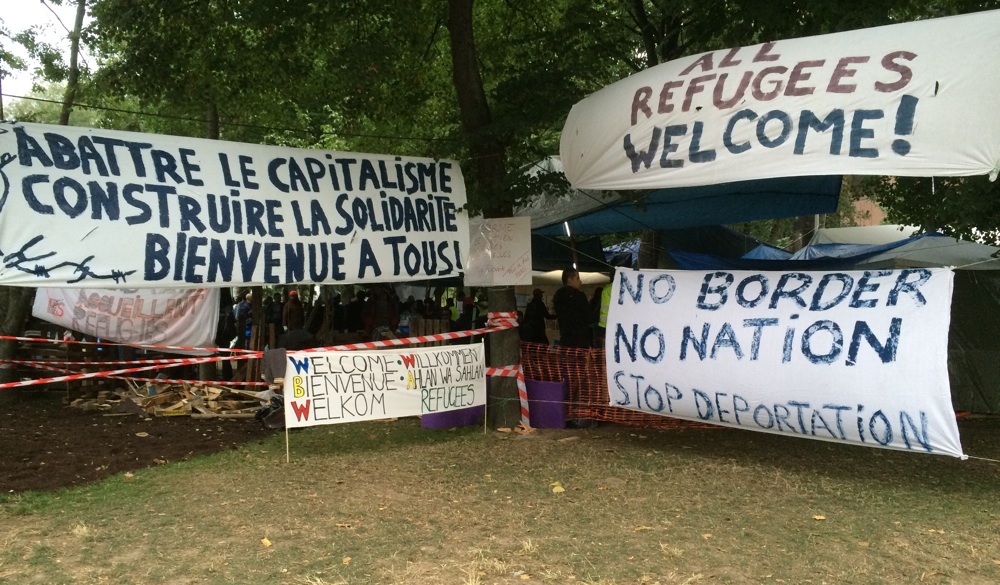