I have been a longtime fan of Vanessa Zoltan’s work as the co-host of the brilliant podcast, Harry Potter and the Sacred Text. I am also an avid romance novel reader. So I was delighted to learn that Zoltan was starting a new podcast, Hot & Bothered, which proposes that writing romance novels can be a sacred practice. The first season profiles romance novel-writing neophytes grappling with the writing process, and includes discussions with romance novelists, academics, and cultural critics about the romance genre. Although the podcast celebrates romantic love, it also focuses on the often complicated, non-romantic relationships people have with writing, identity, and friends and family, among other topics. Presiding over the process is the New York Times best-selling romance novelist Julia Quinn, whose beloved Bridgerton Series is currently being adapted into a Netflix series by Shonda Rhimes.

CAILEY HALL: Hot & Bothered focuses on romance novel writing as a sacred practice, which builds on the work you have done reading Harry Potter as a sacred text. What does the sacred mean to you? How do you define it?

VANESSA ZOLTAN: What I mean by the sacred is something that you are in an intentional relationship with that gets you better at loving. Some people can treat their kids as sacred. Some people treat their relationship with their plants as sacred. I’m stealing from St. Augustine’s Confessions, where he says that if the lesson you get from reading the Bible is that the love of God and the love of man is one love, or that God is love, then you are reading the Bible correctly. And if you are getting a different message, then you’re reading it wrong. I think the same is true for the sacred. If it is getting you better at loving your fellow man in the world, then I think you are in a relationship with something sacred.

Thinking about the relationship between the sacred and love, I’m interested in what led you to want to make a podcast about romance novels. You begin theorizing this in the first episode of Hot & Bothered, where you say that romance novels often seem like they’re trying to conjure good men, and imagine happy endings in a way that still feels difficult to do in the real world.

I have always been a sucker for stories about love, but I thought that I was too smart for romance novels. And then Trump got elected. Someone had sent me The Duke and I by Julia Quinn years before, and it was sitting on my Kindle. I read it because I wanted something “dumb” to distract me. But I realized romance novels are cathartic, inspirational, and not dumb — they’re brilliant. My favorite quote about this comes from Ursula K. Le Guin responding to accusations that her writing is escapist: “Nobody, except the most criminally irresponsible or pitifully incompetent, escapes to jail. The direction of escape is toward freedom.” That’s how I feel about romance. They’re not about escaping from reality, but to imagination.

We are in this moment when we are realizing that there is a literal conspiracy of high-powered men subjugating women. I just read the Alan Dershowitz article in The New Yorker. These stories are never ending. Even someone like Michelle Williams isn’t exempt. You can be a successful actress and get $80 a day, while Mark Wahlberg is going to get paid close to a $1 million a day. I think romance novels are a way for us to get better at imagining the men we deserve, and the way we deserve to be treated, and then demanding it.

This season, each of your writers is focusing on a specific trope. What are your thoughts on the productive confines of tropes?

Tropes also give you just enough structure to allow for freedom. We all know this: if you’re given too much freedom, you don’t know what to do, and you end up completely overwhelmed and confused. The episode that I’m currently writing is about my friend, Olivia, and her wife Molly, who chose the trope “secret baby” because they were having a hard time getting pregnant. They wanted to imagine a story about being able to get pregnant by accident. It freed them up to imagine happiness for the two of them as parents. The fact that a happy ending — and a happy ending with a baby — was a foregone conclusion, allowed them to work through a lot of their feelings, and to realize that they would be happy no matter how they made a family. While we were interviewing them about the writing process, they became foster parents.

The episodes so far have focused on writing as an often difficult process, and all the complicated emotions writing brings up. Did you expect that the podcast would confront people’s relationship to writing and to themselves?

A lot of people look at romance novels and think: I can do that. Turns out it’s hard! When I first started treating secular things as sacred, I asked my professor, Stephanie Paulsell, to teach me how to pray. I couldn’t pray with the Torah because the language about God was too distracting and difficult for me. So I asked if we could pray using Jane Eyre. We talked about reading, writing, and walking as forms of prayer. Traditionally, writing has also been a female way to pray, for political reasons. I consider writing the romance novels that I write — that I have no intention of publishing — to be my way of praying. Prayer is hard. You don’t always want to pray. You are in a fluctuating relationship with whatever it is you are praying to. You are in a relationship of doubt. A prayer life is not an easy life. Any life of dedication is relentless. It never ends.

It’s the same with writing a romance novel. If you are committed to writing 10,000 words in three months, it is relentless. The task hangs over your head. And if the process is relentlessly getting you better at loving, then I would say that is a good relationship to have. It works for some people. Hot & Bothered is offering them this invitation: here is a different way you can pray. Here is a different way you can be in a constant relationship with love, and romance, and goodness, and despair, and hope. But it isn’t going to be effective for everyone. Writing can be masochistic for some people. I don’t think it’s for everyone. But I also don’t think that something has to be right for everyone in order to be mostly a force for good.

Could you say more about the historical reasons that writing as a form of prayer has been a traditionally female practice?

Stephanie Paulsell’s term for this is scriptio divina, or “sacred writing” (from the Latin lectio divina, or “sacred reading”). When women are sequestered, writing is one of the few things they can do. And writing has been a form in which they can discreetly dissent. A great example of this is Teresa of Avila. There’s also a tradition of women claiming God is telling them to do things, and therefore the church can’t silence them. Hildegard of Bingen claimed that God was writing through her. There are these moments that are available to women throughout history and they grab them through writing — or preaching. In the Methodist tradition in the United States, they believed that God could tell you that you were a preacher, and that was your ordination. There was this brief loophole moment where Black women could declare: ‘Guess what, God told me I’m a preacher.’ And then they closed the loophole. But there are these great grabs for power amongst women, claiming the voice of God is going through them, claiming religious authority, and using writing as a mechanism for dissent.

I love that you’re tracing a literary genealogy from someone like Teresa of Avila through to contemporary romance novels.

It’s what women do now, by self-publishing through Amazon. It’s why I can’t totally hate Amazon. It has allowed writers in rural areas, who wouldn’t have access to New York publishers, to self-publish — and sometimes find an audience. Self-publishing is this moment of women and other marginalized groups claiming their own authority and saying: these gate-keepers aren’t working for me. So they find other markets.

Yet romance novels are still more stigmatized than other genre literature.

My first question to anyone who thinks romance novels are stupid is: have you read one? And they almost always haven’t. As soon as I started reading romance novels, I found that so many brilliant people read them. And I thought, Why was I a snob for so long? I’m also convinced that if men wrote these books, people would talk about them differently. John Updike made a career of writing marriage novels. Why is he winning Pulitzers while romance as a whole genre is derided? I want to say: Just imagine John Updike wrote this romance novel and tell me what you think.

It definitely came about holistically. I’ve realized that I don’t like focusing on romantic love as the be-all-end-all. A lot of romance authors focus on female friendships. I love that about the genre. If my romantic relationship were to fall apart, I would still have friends and a very rich love life. I think you can’t talk closely about romance novels without talking about more than attraction and first kisses. If we’re going to talk about love, it’s important to talk about all forms of love.

We’re doing an episode on friends-to-lovers. It’s such an interesting trope — what is the difference between a friend and lover? Is it really just the sex? And we realized: No, there are sacrifices once you’re not someone’s friend but their partner. One of the benefits of being friends with someone is that they can piss you off, and you can just take a while and think about it. There’s more space for mistakes. Whereas if [my partner] Peter and I make a mistake with each other, we have to confront it immediately because we have to eat dinner together that night. It’s a different dynamic. It’s weird that we put a value judgment on one being better than the other, when they’re just totally different from each other.

What is in store for upcoming episodes? And potential future seasons?

We have a ministry rule, which is that you preach from your scars, not your wounds. And I am concerned that in Hot & Bothered, I am telling stories from a few wounds, rather than scars. We’re going to talk soon about a man who lied to me for years, and was married the whole time we were dating. You can’t talk about love in romance without talking about your own love life. And that is something that I didn’t anticipate. We’re also talking about babies, betrayal, motherhood, religion, and friendship. Those are some of the big things coming up.

In future seasons, I want to focus on two of the biggest consumers of romance novels: women in prisons and women in nursing homes. I would like to do sacred reading in those spaces. I think there are endless seasons. Reading romance as an Amish person? Romance is a complex ecosystem that we want to spend a lot of time in, and that deserves more attention than just one season. I want this to be a reality show. Everyone talks about how great “The Great British Bake Off” is because it’s kind. But what’s kinder than people who love reading romance novels? 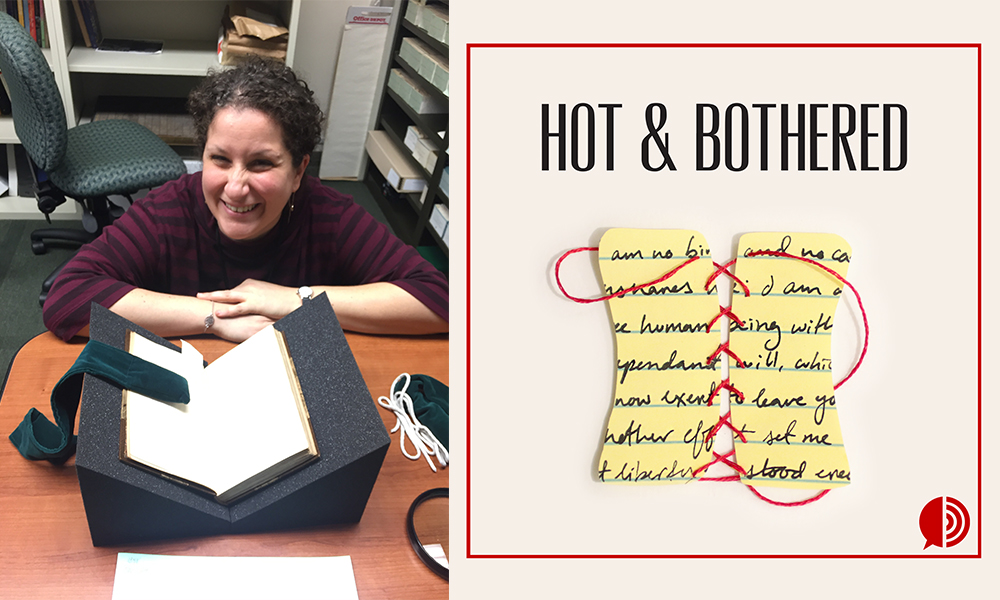