Before the latest hostilities between Palestinians and Israelis, I was in contact with 40-year-old Rami Aman, a peace activist from Gaza who has dedicated himself to building bridges between people. In 2020, he organized a two-hour video chat via Skype between Palestinians in Gaza and Israelis in Jerusalem. Two hundred people took part in the dialogue, wryly named “Skype with Your Enemy.” Shortly afterwards, Rami literally disappeared. Amnesty International and other human rights organizations demanded information of his whereabouts and then, when it became apparent he was undergoing torture in a Hamas jail, they rallied for his release. At the time, it was presumed he’d been arrested for skyping with the enemy.

In fact, it was because he’d recently married M., whose father is an official in the ruling Islamic militant group of Hamas. (Rami’s wife’s name has been omitted for her protection; here, we refer to her as “M.”)

After his release, Rami and I arranged to talk, but then he stopped answering my emails. I presumed he was wary of speaking to me, since I live in Israel. Not wanting to get him into trouble, I respected this and let it go. A few weeks later, he wrote me again: “I’m sorry for disappearing. Let’s talk.”

JOANNA CHEN: What made you get in touch with me after such a long silence?

RAMI AMAN: The idea that I should keep going. I want my voice to be heard outside of Gaza. It’s been tough for me since my release. I was tired, I wanted to give up. I felt hopeless, like I’d disappeared all over again, the way I did in jail.

I can’t imagine how hard it must have been for you.

It wasn’t my first time in jail, but it was the worst. I was held this time for a total of 200 days. Much of the time I was interrogated and tortured.

You were in the notorious “bus”.

Yes, I spent most hours blindfolded in a narrow room on a small chair, sometimes with my hands tied above my head.

How did you get through this?

I learned how to control myself in the darkness. I thought inside myself that I’m in a movie, and I just need to act my part really well. I thought about the future. I sent messages in my head to M. and other friends I was sure were thinking about me. I felt sure I would be released sooner or later. Mostly I thought about M.

When did the two of you first meet?

She joined the group I formed, the Gaza Youth Committee, a group dedicated to reconciliation, both between Christians and Muslims, men and women in Gaza, but also with Israelis. I wanted to promote Palestinians and help them to be decision makers. We worked to get everyone sitting around a table, even a virtual one. M. joined the group about three years ago. She believed in our cause.

Was it love at first sight?

No! At first, I didn’t think about her in a romantic way, I thought she was a good speaker and I was impressed with her dedication. She came every day to help fundraise for the organization. When we released 150 doves into the air in 2018, she was there. We spent a lot of time working together, we built our own world. M. gave me the courage to keep going. She was my friend, we spent hours and hours together. We hid it all and finally married, but quietly.

In a strange twist, it was your marriage to M. that led to your arrest.

After hours of interrogation in prison, it became clear what they really wanted. M. is the daughter of a Hamas official and they couldn’t accept that she was reaching out to Israelis. As founder of the group, I was being pressured to divorce her.

At first, I said no to everything to do with M. I had no idea where she was or what was happening to her at that time. Eventually I understood she was in prison but would be released if I divorced her. I signed the papers.

This also led to your own release from prison.

Yes, but M. had meanwhile been forced to leave Gaza and join her family in Egypt. So we’ve been separated. Two months has gone by since she left Gaza. We email, but the words are empty. Nothing personal. This is not the M. I knew at all.

I tried to leave Gaza immediately. I wanted to join her. The Israelis gave me a permit to cross the border into Israel; Hamas has banned me from traveling anywhere. So I’m stuck here in Gaza. They’re afraid I’ll say bad things about them. I told them I’ll say bad things about them from inside Gaza if they won’t let me go. People tell me to keep my voice down, that it’s not a good time. My friends are afraid for me but I don’t care anymore. I gave my life for peace and now I have no life left.

What has all this been for? Because of what? Because of nothing. I’m still here, talking to you, but what about my own private life? Things change, you know. I might look strong but there’s another Rami inside me who’s removed from everything and no one knows about him. I’m two people in a single body – Rami the activist is stronger than ever, surer than ever — but Rami the private person is destroyed, dead, eroded.

How can you go on under such circumstances?

I’m trying to find my balance. I realized when I began all this that I’d face risks and challenges.

Are you afraid of further reprisals from Hamas?

As a person, yes, but not as an activist. As an activist I’m ready for anything. But listen, I watch for cars when I’m out. I need to see them coming at me, not behind me. Three years ago I was kidnapped while walking outside on the street. A black sack was pulled over my head, I was held for 6 or 7 hours and then released.

What do you wish for yourself?

To reunite with M.

Can you imagine that?

No, of course not. I can’t even get out of here, it chokes me inside to think of meeting her again. We planned so much together. I see M.’s face before my eyes all the time. That’s all I have now. 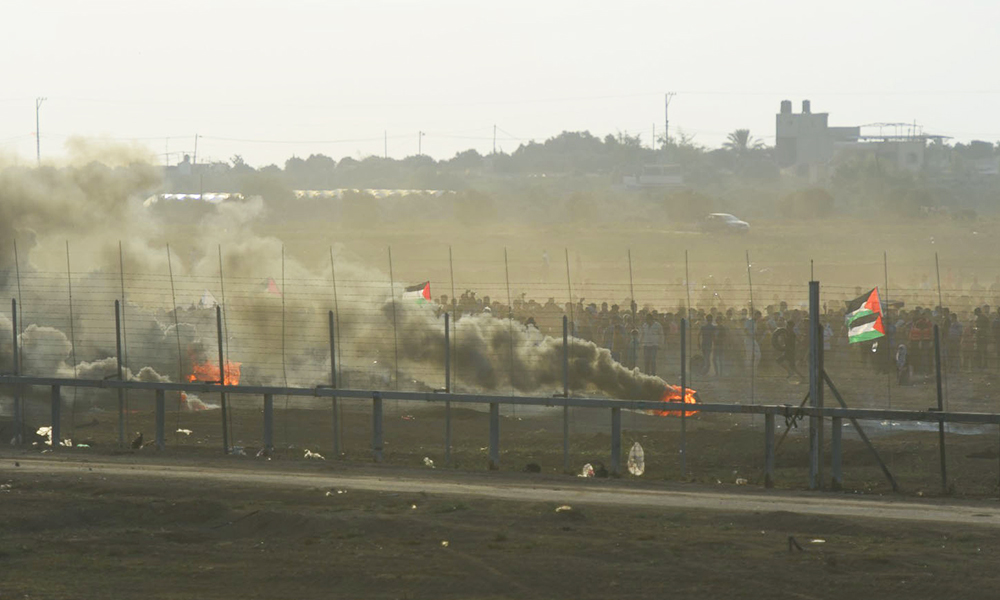