Commander in Cheat: How Golf Explains Trump by Rick Reilly, out now from Hachette Books, details President Trump’s long history of cheating on and off the golf course. Rich in anecdotes, the book gives the reader a behind-the-scenes look at Trump’s behavior on the course and delves into the devious ways he runs his worldwide golf empire.

Rick Reilly is a sportswriter known for his long-running back page column for Sports Illustrated. He is formerly a featured columnist at ESPN.com and essayist for SportsCenter. Reilly is the author of thirteen books including Who’s Your Caddy?

SCOTT BURTON: So many books have been written about Donald Trump. What made you want to write one about his relationship with golf?

RICK REILLY: I didn’t want to write this book. I was happily retired and living part-time in Italy. But then I started hearing him lie about his golf on the campaign trail in 2016. I heard him bragging about how many club championships he had won. I knew those were lies because he’d already told me how he does it. He plays the first round at any new course he buys and calls that the club championship! I thought there might be more there, which there was, and I thought it was something people should know.

The book is littered with stories of Trump’s cheating on the golf course. Is there one anecdote that most stands out to you?

Yes, cheating Tiger Woods. Who does that?

What continues to amaze me is the cognitive dissonance of many Trump supporters.  I was struck by the story in the book of Juan Carlos Enriquez, who you describe being stiffed by Trump for $30,000 for a paint job at Trump’s golf resort in Miami. Mr. Enriquez then sued Trump, eventually winning but incurring high legal fees along the way. Amazingly in the midst of the legal battle Mr. Enriquez voted for Trump in the 2016 election. How do you account for this?

I don’t know. I can’t make sense of that. He sued the US president for the money he owed him and won. The standing President of the United States. A painter did that. After Trump just flat stiffed him on the money he owed him but then he told me he’d vote for him again. He said he liked his policies. I really can’t explain it.

At one point you state that Trump has been a part of more than 3,500 lawsuits. Are you worried he will sue you over this book?

Look at what Trump did with Puerto Rico, turning his back on them after the hurricane. Well, a lot of people don’t know that, before he was president, Trump was involved in a golf course down there, outside of San Juan. The course hired the Trump Organization to come down and try to build business. They paid the Trumps a lot of money to jazz it up, get Trump down there, get his celebrity friends down there, get it noticed. But it didn’t work. They were like, “Okay, we’re going to fold up shop. Thanks for nothing, Mr. Trump.” But the Trumps were like, “No, no, we can still do this. Go take out a big loan from your government and we’ll make this happen. We’ll get this course going. We just need more time. We might even get you a PGA Tour stop.” So they went to their government and borrowed $32 million. But that didn’t work either. Business just got worse. And then the Trumps just pulled up stakes and left. Just left the Puerto Rican people holding a $32 million loan. So I’m not saying he abandoned Puerto Rico because of the failed golf deal. I’m just saying he’s turned his back on them twice now.

The subtitle of Commander in Cheat is How Golf Explains Trump. How does golf explain Trump?

I think golf is kind of a window into a person’s soul. Arnold Palmer used to never go into business with a guy until he’d played 18 holes with him. I asked Arnie once, “Why?” And he said, “Because you can’t hide who you are in a round of golf. If you’re going to cheat me on the course, you’re probably going to cheat me in business.” Trump sees nothing wrong with cheating and lying on the golf course. If he’s willing to do that on the links then what is he capable of doing with the most powerful position on the planet? In sports we’ve known Trump for 30 years. We always knew he was full of it. We always knew he was telling us whoppers just to get attention. But now, his lies matter. They affect the world.

Scott Burton is a literary interviewer based in San Diego. 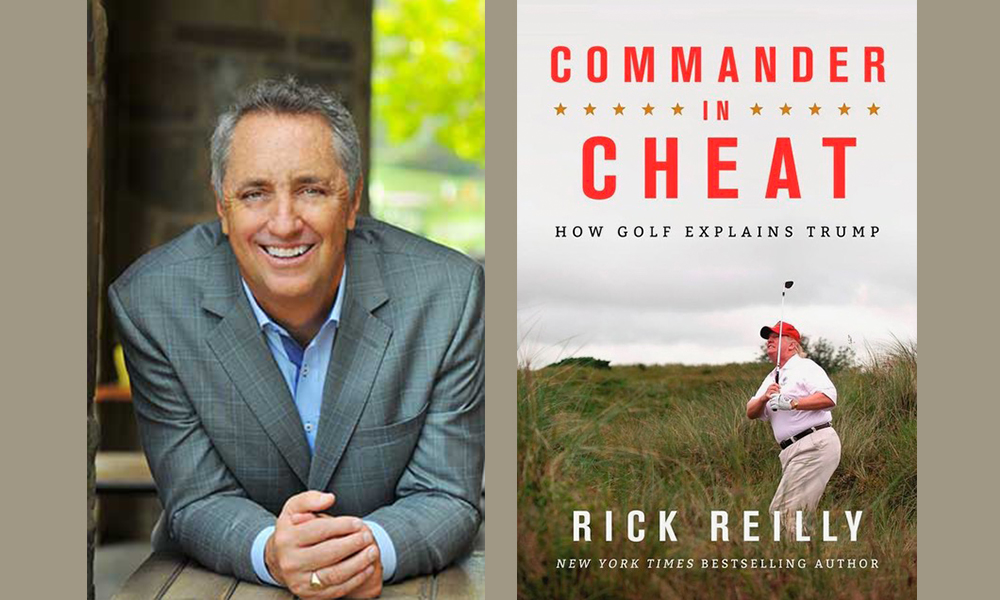