In her latest book Flower Diary: In Which Mary Hiester Reid Paints, Travels, Marries & Opens a Door, renowned poet Molly Peacock (The Analyst) reveals the world of a forgotten painter who managed both a trailblazing, successful career and a marriage in the Edwardian age. Weaving together elements of biography, memoir, and art history, she examines the balancing act between female creativity and domesticity in the life of Mary Hiester Reid (1854-1921). This work serves as a companion piece to her 2011 critically acclaimed The Paper Garden: Mrs. Delany Begins Her Life’s Work at 72.

ROSS KING: First of all, tell us a bit about Mary Hiester Reid. I suspect for most people she’s not exactly a household name.

MOLLY PEACOCK: But Mary Hiester Reid is a name we should know. She was an amazing late 19th and early 20th-century painter of luscious floral still lifes and atmospheric landscapes, one of the first generation of women painters to get married — and not stop painting. A foremother of Georgia O’Keefe, she was an Impressionist, a Tonalist, and a Realist all at once, producing over 300 oils. An American from a prominent family in Reading, PA, she married the Canadian artist George Agnew Reid; the two lived and painted in Toronto but also maintained a studio in New York’s Catskill Mountains. Mary studied in Paris, wrote and painted throughout Spain, sailing to Europe five times, often creating emotional paintings of three subjects: three trees, three roses. And one last thing: she and her husband lived in a loose menage with a talented younger painter, Mary Evelyn Wrinch.

MHR came of age, artistically speaking, in the 1880s, studying in Philadelphia under Thomas Eakins and then in Paris. It would have been an exciting time to be a young art student. How much was she exposed to the art movements of the day, such as Realism, Impressionism and the Arts and Crafts movement? What was her reaction to them?

There were three thrilling years when the so-called libertine painter, Thomas Eakins, taught at the Pennsylvania Academy of Fine Art, the only place in the western world where a woman could study nudes, and Mary had the luck to be there. Her widowed mother had passed away and her sister had gone to Europe, so Mary was freer than most women to take her life into her hands. As a young art student, she studied Realism and the figure with Eakins, learning to draw with her brush. She met her future husband at the school, and they married immediately after graduation, taking an economy steamship to Paris where she reveled in Impressionist techniques as the Eiffel Tower was being built. After funds ran low, they returned to Toronto where they set up a teaching studio. Soon Mary had also embraced Tonalism, the technique devised by James Whistler where paint was applied so smoothly it was “like breath on glass.” Combining Realism, Impressionism and Tonalism, she developed her signature style, “Sympathetic Realism.” She produced deeply emotional paintings, infusing the objects she painted with personality and empathy. Becoming active in the North American Arts and Crafts movement, Mary embraced ideas that still influence American décor. She lived in an Arts and Crafts house designed by her husband and used their Arts and Crafts interiors in her paintings.

What challenges did she face as a woman, both as a student in Philadelphia and Paris and then as a more mature artist making her way in the male-dominated art world? What can we make of the fact that she specialized in flower paintings?

Mary dealt with a level of sexism that we can hardly grasp the dimensions of today. She lived in a world of men openly condescending to and joking about the capabilities of women. It was sheer persistence and her philosophy of “going cheerfully on with the sketch” that allowed her to succeed.  Notoriously reticent with her opinions, she supported her husband’s artistic career almost at the expense of her own, but not quite. Instead, she practiced a version of stealth feminism. Quietly, while throwing parties for her husband’s work, she kept on painting and showing her canvases yearly, earning reviews as Canada’s preeminent woman painter, entering work in the Chicago, Louisiana, and Buffalo Expositions.

Tell us a bit about her husband, George A. Reid — and also about the Onteora Club in the Catskills.

George Reid was far better known than Mary. He created huge, iconic, realistic narrative paintings, many of which Mary modeled for. Perhaps his best-known work is Mortgaging the Homestead, in which a farmer signs his farm away to a banker while his helpless parents, angry wife, and bewildered children look on. He led important art organizations, agitated for artists with the Canadian government, and became the principal of a prominent art school in Toronto. While he benefited from Mary’s constant support, he also supported her by including women in his endeavors, by boosting her career with professional memberships, and perhaps most importantly by building her several gorgeous studios where she could paint. He always assumed she would paint, and he never forbid her to do it — which, as a 19th-century husband, he had every right to do.

The Onterora Club in Tannersville, New York was begun by the mother of American design, Candace Wheeler, the textile designer and interior decorator who was a partner in Associated Artists with Louis Comfort Tiffany. Mary was a member and her husband George built their studio, the Onteora church and a number of the Onterora houses during the seventeen years they spent there. Onteora is where they brought their summer students.

You say in the book that you were warned against tackling MHR because of the lack of source material — no diaries and only a few letters. How did you overcome these drawbacks in order to tell her story?

We can’t turn away from the stories of women’s lives just because they didn’t happen to leave a diary! Mary did leave records of the titles and prices of her paintings, and her friend kept a few precious letters of key events like the day she walked down the street to cast her first vote. A biography of her husband allowed me to create a chronology of her life. Newspaper reporters reviewed her work. Best of all, she wrote an evocative travelogue of a trip through Spain and published it as long form journalism in a cultural magazine of her day. It’s not only written documents that give a biographer a sense of a person’s life, but buildings and places. Miraculously many of the places she lived or traveled are much the same. Because her one of her studios was blocks from where I live, I was able to pick up a sense of her movements around our neighborhood. Several art historians have written beautifully and thoroughly about her work. Books of her day, like birth control manuals, marriage advice, and cookbooks allowed me a frame for her life.

There’s a personal element to this book that’s extremely poignant. At what point did you decide that you would weave these experiences into the story?

Because I was trying to walk in Mary and her husband’s footsteps, I invited my own husband to accompany me. How would our 21st-century marriage relate to their marriage a century before? We had to cut short a trip to Spain where we were retracing their travels because of my husband’s health crisis. He had entered a drug trial because of his stage IV melanoma. As my cancer caregiving accelerated, writing Flower Diary became a refuge — and a bit of a research challenge. As I thought about how Mary accommodated another woman in her marriage, I realized I had been accommodating illness almost like a third party in our marriage. I began to see the subtleties of long relationships in both centuries, and I started interludes in Flower Diary with the story of my marriage as a counterpoint to that of Mary and George.

Not to gossip, but I have to ask you about the relationship between MHR, her husband, and her husband’s student, and later wife, Mary Wrinch.

The gifted 18-year-old Mary Evelyn Wrinch became a student of George Reid’s, occupying a studio next to his own. Later, Mary and George took the young woman to Onteora to study with them. Reid then very tenderly painted her portrait. After he built a house with huge side-by-side studios for himself and Mary, he built a house for Mary Evelyn — next door to the Reids. As she was dying of heart trouble, Mary Hiester Reid is said to have said to Mary Evelyn Wrinch, who was then forty-five years old, “George will be needing a wife, and I think it should be you.”

At the time of her death in 1921 MHR was called Canada’s “foremost woman painter,” and in fact one of the country’s top painters, period. A century later, what can you say about her legacy and her paintings? Do she and her paintings still speak to us today?

Mary’s painting got better and better throughout her life, yet her notices began to wane. Not only was she in her husband’s shadow, but in the shadow of modernism and, in Canada, the all-male Group of Seven painters. But MHR wasn’t in the least interested in the hard, masculine lines of modernism. She was interested in the softened organic shapes of emotion and emotional interiors. Though her reputation sank, it never disappeared. There were always people who responded to the luscious shapes of flowers and her “japonisme,” the magical inter-relationships of ginger jars and other containers as well as the Japanese prints she sometimes reproduced in her work. There were always people who wanted to fall into those pillows she painted in the Arts & Crafts rooms of her paintings. Now art historians are turning more and more to Mary. We’ve put the sometimes toxic masculinity of Modernism in perspective. Her paintings are noticed at auctions. Her following on social media is increasing. Why? Because not only did she paint her heart out, she painted with heart. Her mysterious trees and evening scenes show us our own emotional twilight; her chrysanthemums show us our own personal autumns, her roses display their blowsy sexuality and we can connect to her deep sensuousness. We’re ready for the resurgence of Mary Hiester Reid. 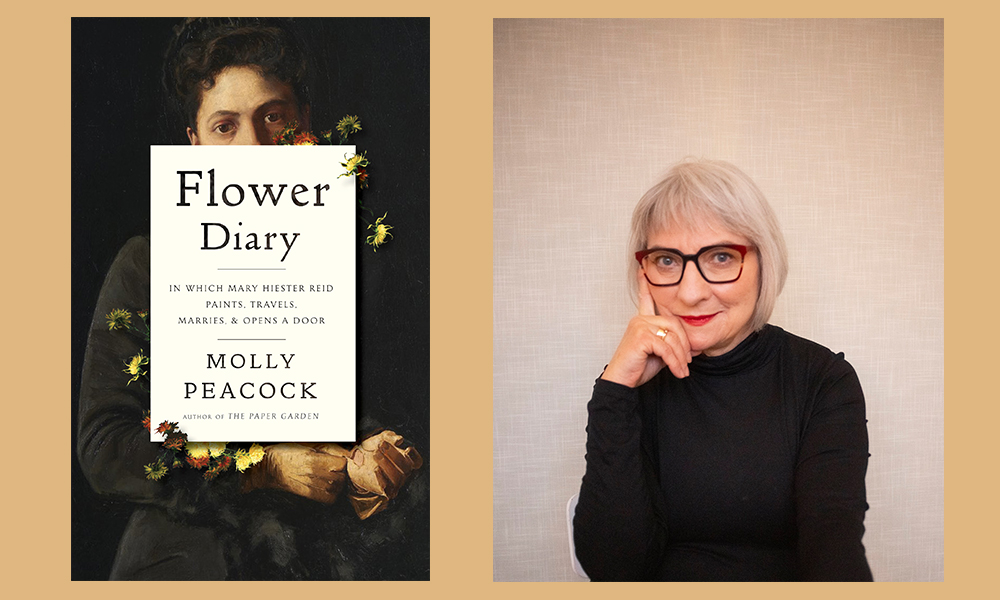