Leah Lakshmi Piepzna-Samarasinha’s latest book, Care Work: Dreaming Disability Justice, (Arsenal Pulp, October 2018) is both a call to activism and a call for community, a brash and bold reiteration of the biblical injunction to be our sister’s and brother’s keepers.

The 19 pieces in the book, many of them previously published, are a showcase for Peipzna-Samarasinha’s unabashed support for disability justice. The concept — developed by Sins Invalid, a “performance project that celebrates artists with disabilities, centering artists of color and queer and gender variant” individuals — links sexism, racism, colonialism, heterosexism, and transphobia with ableism, values every person as whole, opposes economic exploitation, and recognizes human interdependence and the need for collective solutions to collective problems.

I recently spoke to the Lambda Award-winning writer from her home in Seattle, Washington. During the course of our wide-ranging phone conversation, we touched on numerous themes, from moving beyond the “charity model” that dubs the disabled as deficient, to the use of the word crip by disabled activists, to Piepzna-Samarasinha’s identity as a disabled, queer, femme, mixed-race (Sir Lankan, Irish, Roma, and Ukrainian) activist and author.

ELEANOR J. BADER: Some of the essays in Care Work seem directed toward queer, disabled people of color, while other essays seem directed at a broader audience. Was this intentional?

LEAH LAKSHMI PIEPZNA-SAMARASINHA: I wanted to write something that speaks to disabled people of color first, because we deserve that and we’re so often not seen as a community or a readership. But I also wanted to write to the broader social justice community, particularly people of color who don’t always think about disability. So much of the time, the furthest able-bodied activists get, when they remember disability at all, is the “inclusion model” where they want to bring us into the movement. This assumes that disability is somewhere far away, not already in our lives and movements. The disability justice framework flips this by centering access and disability in the everyday work that is already being done. It’s hard for many people to understand that disabled people have skills, histories of activism, and can create, and have created, many kinds of culture.

Recognizing this is especially important in our work to end police brutality and the police murder of civilians. In the last few years, it has come to light that 40 percent of the Black and Brown people murdered by police were disabled. There are so many examples. Charleena Lyles, for one, was a 30-year-old, pregnant, Black mother of three with a mental health disability living in Seattle. She called the police in June 2017 because she thought someone was breaking into her home and they responded by shooting her to death. Stories of deaf people getting shot by police because they did not hear the police demand that they put their hands up are also quite common.

Disability justice movements understand that the police murder of Black and Brown people will not stop until we address how ableism intersects with police violence. Care Work further reminds social justice activists that disability is not a liability, but can be used to foment really powerful political actions.

Can you give me an example of this?

Last year, at a Bay Area rally in support of the Deferred Action for Childhood Arrivals (DACA) program that the Trump administration has put on the chopping block, the 16-year-old emcee announced that the march was going to be led by elders and disabled people and would move at the pace that these folks needed. She yelled out, “If the revolution isn’t accessible, it’s not going to happen.” My heart just soared. Usually with marches, they’re eight miles long, uphill, and if you’re moving slowly you just have to watch the march as it leaves you behind. This was the opposite.

Similarly, when Black Lives Matter organizers and allies shut down the Oakland police headquarters in December 2014, a group of disabled people who used scooters and chairs locked down in front of the building entrance. This was a really powerful example of our disabled bodies being creative assets. It was also a smart tactic since cops know that beating up people in chairs is a really bad photo op.

You use the word “crip” throughout Care Work. How widely accepted is this term within the disability justice community?

Not everyone in the disability community likes “crip,” but for many disabled people, it’s similar to taking back the word queer. Crip is a word that disabled activists have been using since the 1980s as a way of saying “fuck you” to terms like “differently abled.” There’s a way the disability is treated with pseudo delicacy, and crip is a way to shake up assumptions. It can be a shorthand, a way of connecting.

In the book, you write that “ableism helps make racism, Christian supremacy, sexism, and queer and trans-phobia possible.” Can you say a bit more about the intersection of these isms?

We live under capitalism and the dominant paradigm tells us that if you can’t work a million hours a week you won’t be able to pay rent and, worse, you’re not seen as having a right to exist. As a society we value those who can keep up. In terms of racism and sexism, disabled activist-writer Mia Mingus has this line I always go back to where she says “I know many women of color who don’t identify as disabled, even though they are…It can be very dangerous to identify as something when your survival depends on denying it.” In the book I write about meeting women who are closeted about their disabilities, but who casually mention that they think they’ll be dead by age 50. I don’t want to deny that that might be true, and I understand people’s need to closet themselves to survive. At the same time, I think that if some of these women were able to find sick and disabled communities that looked like them and supported them, dying young might not feel like the only option.

As part of our decoloniality, my friend Qwo-Li Driscoll, a Cherokee, Two Spirit writer and scholar, talks about how pre-colonial societies had value-neutral words for different disabilities; they recognized that there was more than one way to have a body. People practiced mutual aid and people could show up as they were.

I want to stress that the idea of need is political and is both raced and gendered. Some of Sins Invalid’s core work is to promote the idea that we are desirable. Most people, especially women and feminized folks, are afraid to be seen as needy, and even though they might never say this, ableism is at the core. Able-bodied people startle away from people with disabilities because we have needs and this neediness scares the shit out of them. And even though many movement spaces are paying more lip service to sustainability, there’s still an emphasis on working at breakneck pace. This is what is seen as sexy, what’s valued. But when people work themselves into the ground and eventually burn out, we all lose.

One of the gifts of disability and moving on “crip time” — slowly — is that we notice things that people moving quickly typically miss. Another value is that more people are able to remain active for the long haul.

In terms of the intersection of disability and queer and trans-ness, Sins Invalid and other disability justice groups have been drawing connections between the ways trans, intersex, nonbinary, and sick and disabled folks face violence and gatekeeping by the medical system, from the medical stripping of young disabled kids, to forced surgeries on intersex children. We’re all people with wonderful, non-normative bodies fighting a medical system that often actively hates us. It’s powerful when we unite and say that we’re the experts on our bodies and should be able to access the medical interventions we need.

In addition, the recently leaked Health and Human Services memo stating that Trump’s government wants to say that trans and intersex people don’t exist, goes hand-in-hand with their attempts to end DACA and the Affordable Care Act.

Care Work recognizes that some people have to rely on paid home health aides rather than community members who pop by with groceries or medicine. What can we do to better promote the idea that government has a responsibility to provide high-quality well-paid in-home care to those who need it?

Community-based care, especially the care that sick and disabled folks give each other, is incredible and saves lives, especially for those of us who can’t access government care because we’re undocumented or our disabilities are not seen as real. It’s also true that a lot of disabled folks are isolated because of ableism and don’t have community, period.

You shouldn’t have to be liked or have friends to be able to go to the bathroom or get dressed. I have friends who say, “look, no amount of friends in the world can help me with the 10 hours of daily personal care I need.” Part of that is wanting personal care attendants to earn $30 an hour, be unionized, and have great vacation and sick time! I want whatever we create next to include a well-paid pool of personal caretakers and a system where access to care is a human right.

The National Domestic Workers had a great campaign called Hand in Hand, where care attendants and the disabled people who hire them came together to demand that the workers get more than $15 an hour. This kind of joint effort is how we all win.

Unfortunately, in the current political moment, we’re forced to fight just to keep the inadequate care we have, but as long as disabilities are considered individual problems rather than collective concerns, we’ll be hampered from organizing. We have to see disability as a political issue. We won’t be able to organize around it until we can claim it.

You write about cross-disability solidarity. How common is this?

There are divisions in our community just as there are in all cultural or political communities. At a recent Disability and Intersectionality Summit in Oakland, California, writer-activist Stacey Milburn talked about internalized ableism within disabilities communities. She mentioned how people with intellectual and cognitive disabilities are marginalized. Nonetheless, there are many small and big ways we can show up for each other.

One of the first Sins Invalid gatherings I was ever at, in 2009, started with an access check-in, where people go around the room and talk about what their access needs. I was a baby crip then and said, “Oh, I don’t need anything.” But it was mind blowing to me to watch this whole collection of people with many different kinds of disabilities matter-of-factly talk about what they needed, without shame. One person said, “I’ve got to keep warm or my muscles will lock up.” Another person said, “I need the temperature to be under 60 degrees or I’ll have a seizure.” It wasn’t that hard to figure out what to do. On one side of the room we had a space heater and on the other we had a fan. We all got to stay. On a bigger political level, I think groups like The Harriet Tubman Collective, a Black disabled and Deaf activist group that consistently talks about the political issues facing Black, disabled, autistic and Deaf people is a great model for others.

Care Work focuses on working for the world we want while also working against the multiple structures of oppression that currently exist. Do you see this agenda as overwhelming or daunting?

It is, but what other choice do we have? One of my favorite disability justice slogans in “to exist is to resist.” The ways we keep each other alive are powerful. As disabled people, we’ve already survived a lot of things that felt like the end of the world, and we have a lot to teach others as we try to survive today’s would-be apocalypse. 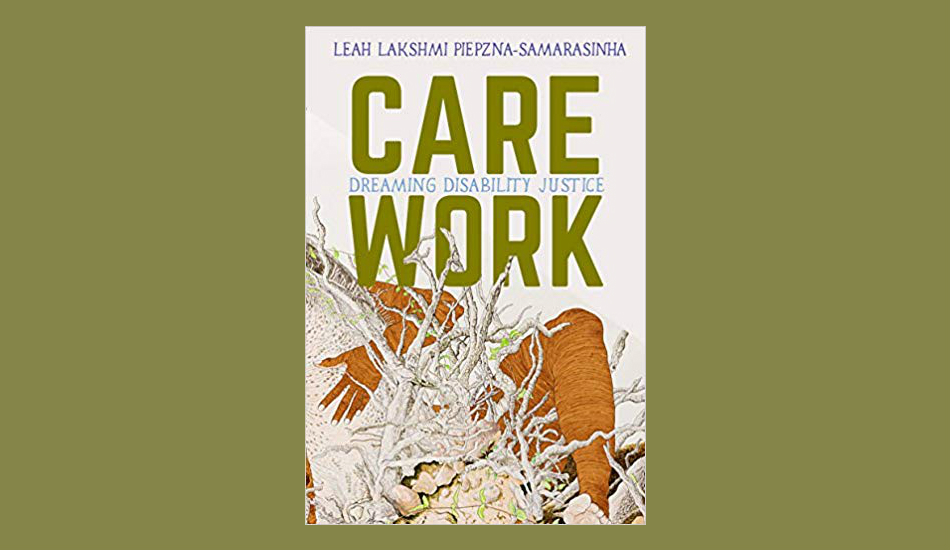