Years ago, poet and translator Katherine Young gave me a lift back to the apartment where I was staying in Washington, DC. I’d been invited to attend a meeting of the DC-area Literary Translators Network ALTA, of which Young is a founding member. We’ve stayed in touch since then and last week Young sent me the manuscript of her latest full-length translation, Look at Him by Anna Starobinets, (Slavica, forthcoming in 2020).

Young has translated numerous works of poetry and prose in Russian and is a 2017 National Endowment for the Arts Translation Fellow for Farewell, Aylis, a trilogy by the Azerbaijaniani writer Akram Aylis, (Academic Studies Press, 2018). Young’s own poetry collection, Day of the Guards (University of Arkansas Press, 2014) was a finalist in the Miller Williams Arkansas Poetry Prize; her new collection is forthcoming in 2020.

I read the manuscript Young had sent me through the night, unable to put it down, a memoir of a young woman in Moscow who discovers in the 16th week of her pregnancy that the baby she is carrying has a fatal defect. The book chronicles not only the author’s personal anguish as she contemplates abortion but the inflexibility of the Russian medical system and Russian society in general.

We spoke the next day on Skype.

JOANNA CHEN: Look at Him is a book that tears at the heart. How difficult was it to translate?

KATHERINE YOUNG: I read it very quickly before I translated it. I knew what I was getting into. I’m able to compartmentalize, and in work like this when so many pages are heartbreaking, my general compartmentalization skills were useful but not totally effective.

What kind of a process did you go through?

While translating the book, I found it tremendously moving to be in the head of a person who I might not have much in common with, to be able to connect on this really deep emotional level with this process that she was going through. That’s the power of writing, right? It breaks down the superficial, it goes to what unites, or divides, all of us.

In your translator’s note you mention the book came in for a lot of criticism when it was published in Russia.  You quote, for example, a review by Agalya Toporova who writes, “As a human being, as a woman, I am physically sickened by this text”.

There is a huge and vocal community of people in Russia who believe that abortion is wrong for religious reasons. But it is also because the book itself develops its own genre, no one in Russia has seen anything quite like this. Women don’t talk about these things, even with their partners, so to write a book in which you expose the most intimate details of your body and the choices you made medically is a violation of a lot of subtle taboos about women who are supposed to  grin and bear their trials and tribulations.

Reading it in the United States will be a totally different experience to reading it in Moscow, a culture that is so different. This is undoubtedly part of the complexity of literary translation.

People air their deepest and most private material in American literature. But for women to do so in a Russian context is a rare thing. Over and over Starobinets cites older women who scold her and say, “If you talk to your husband about this, if you involve your husband in this, you’re going to lose him. Women need to keep this to themselves.” That’s not the situation in America, culturally.

You told me you like literature that makes people feel uneasy.

If a work doesn’t make you feel uneasy — and I don’t mean uneasy in a sense of a horror hanging over you — if it doesn’t stir you up and make you think, what’s the point of translating it, what’s the point of reading it? Obviously, there’s escapism, but if I’m giving 6 to 8 months of my life translating a book, I want the book to have resonance and I hope that the book will speak to people, perhaps challenge them and hopefully enlighten them.

What attracted you to literary translation in the first place?

I honestly think it goes back to language, just the pleasure of language. I used to like codes when I was a child. I liked thinking about why we would disguise what we wrote or said; I suspect that language functions in that way for me. It’s a mask. Especially when you’re learning a language, as I was. I felt I had a different name in Russia, I had a different persona in Russian because I was so limited at the beginning in terms of what I could say. It felt like having an alternative personality. Less so these days but at the time it was like having another identity.

What is special about the Russian language?

As a writer, part of my formative training took place in Russia. I had written all my life but didn’t get very serious about it until I was living in Moscow in the 1990s and was lucky enough to make contact with a wonderful poetry teacher, Nadezhda Mirova, who spoke no English. It took almost two years for me to read through pretty much the entire canon of Russian poetry; working with these poems in Russian brought about a magical change in the way I heard language.

Russian is so different from English grammatically and structurally. The sounds are different, and when you are working in a language that is not your own, when you have to think about every word, you are always translating in your head to some extent, paying much more attention to those basic sound formations. It’s not possible for me to go to a long lecture in Russian and just tune out, the way I can go to a long lecture in English and know I’ve gotten the gist of it. It’s an active listening as opposed to a passive one. But in translation, and specifically in the translation of poetry, each language has its own rhythms, its own music, its own sound. What I’m trying to do is capture something of this.

There’s a really good analogy that Edith Grossman cites about what translation is, essentially comparing it to what an orchestra does. An orchestra gets a piece of paper with notes, right? It’s up to the conductor and the individual musicians and the audience to hear and interpret that music in a way that makes sense to them, so translation is a performance in that way for me. There’s not necessarily one right translation although there are many wrong ones but all of us are going to hear and shape that music a little differently. I can’t replicate the music of Russian in English; I can only take a Russian poem and try to perform it in English with the tools and the music of English.

One of the important aspects of literary translation is enabling people who do not speak the source language to read the work in a language they understand. I recently read your translation of Iya Kiva’s poem “little green lights,” in which she writes, “let’s start, yes, let’s start visiting neighbors to borrow war / on the other side of our green park.” It seems to me she is almost talking about the act of translation, explaining what war is to people who have not experienced it.

Translating it into English was a way of entering into that world. For me as a translator it’s not so much to get the work out there to other people. I’m happy to do that and happy when people love it, but it’s mostly because I can’t resist going in there, and the way for me to enter it is to work on it, to get my hands dirty and to play with the language, to find out why they chose one verb as opposed to another verb, so it’s a study of writing in some senses.

This is an evocative and heartbreaking poem, Iya Kiva is of course a transcendent poet, very much on the rise today in the Ukraine, she has written about the fact that her life changed entirely when her hometown was bombed in the current war with Russia and her father was killed. She became a refugee, and everything she’d written before had no relevance to her, and she began to pare down, strike to the heart of the matter — and her writing has taken off as a result.

What attracted you to Akram Aylisli’s trilogy?

His supporters and friends in Moscow, people who worked on his behalf, contacted me and said, “You know this work needs to be out there, would you be interested in taking it on?” What really clinched it for me was the astonishing fact that his books were burned in 2013 in Azerbaijan, a country that considers itself progressive and civilized and a citizen of the world. Azerbaijan has taken important roles in cultural and human rights commissions as if a writer’s books had not been burned in their country. All Aylisli wanted to do was to write and tell the truth. How can we not respect this?

In the broadest sense I feel like everything we say is a representation of who we are and where we come from, what the poet is experiencing in the world. Even a poem about flowers is saying something within that larger context.

Despite some great works in translation that have been published recently, literary translation is still not being given the acknowledgement it deserves in the US.

So many people who consider themselves literate and intellectuals in the American context are not willing to look beyond something originally written in English. They feel the translation couldn’t possibly give them a sense of the original so why should they bother. It’s a really interesting prejudice. I don’t know if it’s true of other English-speaking countries but it’s certainly true here.

What has translation done for your own writing?

For me translation and writing are almost inseparable. My poetry comes out of the work I’ve done in Russian, whether it’s in translation or not; reading, interacting intellectually with authors, looking at their concerns and their world views, and absorbing to some extent some of those perceptions of writing and the world and what is needful in writing, so it’s almost a mindset.

I feel very much more informed by Russian poets than most American poets. I’ve read Walt Whitman, but I don’t identify with him the same way I might say Alexander Pushkin or Mikhail Lermontov or Anna Akhmatova. My first book in English of my own poetry was very much tied to Russia. The poems were themed around Russia, Russian poetry and literature, the experience of dissidence, being there and observing life in the Soviet Union. My next collection, due out this year, is much different. It has to do with the theme of trauma and abuse, a very America-of-the-moment theme — but none of these poems would exist without that Russian literary background. 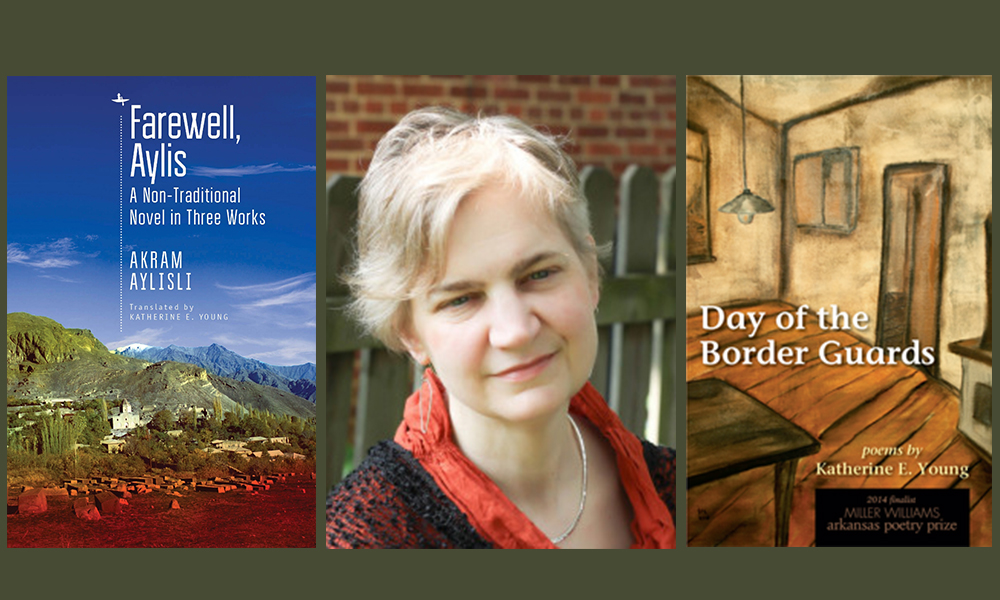