There’s no writer like Chelsea Martin. Authors are often praised for their singular voices, and while Martin’s is certainly unique, it’s not just the way she tells a story, or which details she chooses to include or omit that makes her writing so distinctive, it’s the inner workings of her brain. She’s always been one of the funniest writers on my bookshelf, one who is able to write stories that are simultaneously hilarious and tragic, but her new essay collection Caca Dolce raises the stakes substantially.

Caca Dolce is a collection of personal essays told over time, allowing Martin to analyze and re-analyze her evolving motives as she developed into the artist she has become. The effect is powerful: the experiences of her childhood color and inform her motives as an adolescent, and finally her actions as an adult. This movement through time also allows for themes like sexuality, class, art, and beauty to emerge naturally and be picked apart and assessed by the narrator from different viewpoints in a way that seems honest and fair, both to herself and to the people who become her characters.

We had this conversation asynchronously over email, allowing us to discuss millennials, humor, time’s effect on memory, HTML, and money, while I was at home in New York and Martin was in Spokane, preparing for her upcoming book tour.

BRYAN WOODS: Reviewers seem to enjoy describing you as a “millennial writer,” and Caca Dolce as a collection of “millennial essays.” I know that I’m supposed to think of “millennial” as an empty marketing concept, but I’ve actually found that thinking of myself as an “elder millennial” (you and I are about a year apart) has helped to clarify certain aspects of my identity. Is the word millennial meaningful to you in any way?

CHELSEA MARTIN:  I wish I knew what millennial writer meant. I feel like if I were to describe something that way, I would mean a writer who finds it very important to be seen as cool, who is culturally/politically engaged, and probably incorporates social media experiences in their work. I wish millennials didn’t get so bogged down in the endless “millennials are killing Applebee’s” or “millennials are lazy” conversations, because millennials are actually super interesting and complicated. We were flung headfirst into computers and social media with no understanding of what it all meant. We were the first and probably (hopefully?) last generation to be fully tricked into believing college was an absolute necessity worth the astronomical tuition price just in time for the economy to tank. We constantly figure out new ways to use technology to support ourselves while robots take over reliable old-timey jobs. We’re more conscious than anyone of our impact on the environment. We make time to fight for social justice. And we do it all while being called lazy and shallow and entitled by people wrecking everything in their path. We’re a baller generation.

Your editor, Yuka Igarashi, says your writing is “profound in ways that catch you by surprise. You think you’re reading a story about vomiting up pizza until you realize it’s about class.” Something that has always struck me about your writing is your ability to narrate on these simultaneous levels in a way that doesn’t sacrifice one for the other. That story is about capitalism and class, but it’s definitely also a funny and sad story about losing a prosthetic tooth and vomiting up pizza. How are you able to use so much humor without sacrificing the more serious themes of a piece? Do you treat humor any differently when writing essays, as opposed to your fiction, visual art, or comics?

Humor is one of those things, you know? Think about it too much and it all comes crashing down. When writing Caca Dolce, I chose essay topics that I knew I had a lot to say about, and that I had enough emotional distance from that I could see the humor and ridiculousness of the situation, as well as the broader meaning those experiences had for me. So the layers of meaning and humor came naturally because they were already there pushing those memories to the forefront of my mind. I did treat humor differently for this book. Normally humor is one of my top priorities and I fit the narrative around it. My first priority while writing Caca Dolce was to write an honest account of each experience and what it meant and how it felt. I wanted any humorous element to fit in with my perspective at the time. And it’s incredibly difficult to remember what you used to find funny, so humor was sacrificed somewhat, for the sake of truthfulness. Which I’m actually really proud of.

In a recent conversation with Juliet Escoria, you said: “One thing I didn’t consider when I started Caca Dolce was that writing about an experience extends the storyline of whatever you’re writing about into the present.” I love this premise and the books that play with this idea explicitly, like Karl Ove Knaugsaard’s My Struggle, Sarah Manguso’s Ongoingness, and Heidi Julavits’s The Folded Clock. How do you work to construct devices which simultaneously tell the story of the memory itself, the time that has passed since it occurred, and finally the butterfly effect on the original memory, which has now been altered by the publication of the book?

While Caca Dolce isn’t really “about” time, I was struck by how effective it was to see things portrayed from the evolving perspectives of the same child, teen, and eventually adult writer over time. Did you always intend to tell these stories from multiple perspectives, or did it naturally emerge when you were putting together the collection?

From the beginning, I wanted each essay to be from my perspective when it happened (as much as I could), but it didn’t occur to me until later how much the stories overlap thematically and how much my changing perspective would play into it. One huge hurdle in writing from the perspective of my younger selves was in knowing what happened after those experiences took place. It taints everything. For example, the essay about becoming obsessed with the boy from driving school and making art about him stands out to me in my memory mostly because I did end up pursuing art, and in retrospect that experience seems symbolic of what my attitude toward art turned out to be. But at the time I didn’t know where my life was going, I wasn’t very concerned with the implications of my artistic choices. All I knew at the time was that I had found a way to have a crush on an impossible boy without feeling like shit about it. Writing this essay also stirred up all kinds of new anxiety, because the boy from driving school ended up in the literature world as well. I’d be mortified if he read it and recognized himself. Not only was it a creepy thing to do at the time, but look at me now, still out here making art about him in my thirties. Why am I like this? But, then again, I would kind of love to watch myself deal with that. It’s just the kind of artist I am.

Many essays in Caca Dolce deal with money: growing up in a place where most people don’t have much of it, wasting tons of it in order to attend art school with people who grew up with plenty… Has your relationship with money changed over time? How do you think it has affected your development as an artist? Is it a good or bad time to be making a living from art?

I feel like I’ll never come to terms with all that money means. Everything I think about money feels like a paradox. I feel guilty about what I have, but I want more. I’m obsessed with making money, but only until I’ve saved enough to take time off from working. I despise money for being a source of pain and suffering in the world and in my life, but I use it as a barometer for how well I’m doing. I think about money constantly but I find it so boring. I resent the fact that I have to work non-art jobs that prevent me from doing the art I want to do, but I recognize that the drive for money is partly what helps me stay focused on art. Is it a good or bad time to be making a living from art? I wouldn’t know.

Writers are always saying “I can’t not write.” I hate when they say that, because it’s so obviously untrue. Most writers I’ve met have an extremely hard time producing anything, much less something publishable. But you’ve already published five books, five chapbooks, at least one comic series I know of, videos, illustrations, book covers, etc. Can you…not not create?

Wow, it’s nice to see everything listed out like that. Yes, I can definitely not create. I recently got out of a five-month depression where I essentially did nothing. It had been a particularly brutal winter in Spokane, and I had just finished editing Caca Dolce, and then I lost my main source of income. I was feeling depleted in a lot of ways and didn’t feel like doing anything. So I just tuned out and did nothing. Well, not nothing. I watched Breaking Bad and looked at my phone. I didn’t even really retain what happened in Breaking Bad. It was a very unproductive time. And I just felt worse and worse as time went on. Then it dawned on me how much time I was wasting, and I forced myself to start working on something. I immediately felt better. I don’t feel like a particularly productive person. I can be very lazy and distracted. But I do sincerely enjoy making things. Having creative projects seems like a natural way to live my life. 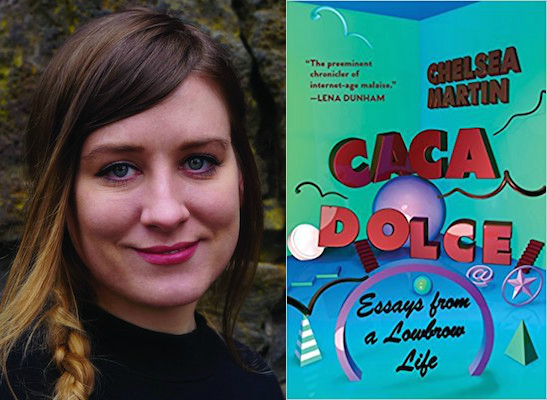