At the end of February 2020, Kate Durbin and I made plans to meet in the Arboretum outside Los Angeles. We had gone to Descanso Gardens a few months earlier, on a 100-degree day, and the heat and the walking carried our conversation from Kim Kardashian to Agnes Martin, from autofiction to horror films. I was looking forward to another walk, and the space it would afford us to talk about her new book Hoarders.

Durbin’s last reality TV book, E! Entertainment, obsessively detailed shows like Keeping Up with the Kardashians and The Real Housewives with a kind of hyperreal strangeness. While E! primarily focused on the homes of the rich and famous, Hoarders takes readers into a wider variety of the US homes, meditating on the layered and fraught relationship between ordinary people and consumer objects in late capitalism.

As the reality of COVID-19 crystallized like a horrifying time-lapse, Kate and I kept postponing our trip to the Arboretum. I couldn’t read much beyond the news, anyway: the terror in day-to-day life was too distressing. At first, manic stocking up seemed to calm me, but twelve jugs of distilled water later, I discovered I’d bought something undrinkable: water for a steaming iron. I found myself reading — and rereading — Hoarders. It felt uncannily right for this never-ending moment in which we’re suspended: a global pandemic rages on, and consumer spending reports are still trumpeted. The balm of buying persists.

Kate and I conducted this interview over the summer of 2020 and into the fall and winter in a Google Doc, sending PS-laden emails along the way, looking forward to a time when we can take a walk.

JOANNA NOVAK: Like E! Entertainment and some of your other work, Hoarders is ekphrastic. How did you start watching “Hoarders” (the A&E show)? What suggested the poetry of it? Was there a single moment?

KATE DURBIN: You know, it’s strange, it’s not how I usually start a project but I decided to write about the show before I had watched an episode. I didn’t want to watch Hoarders because I knew it could trigger feelings about my and my family’s similar problems, with substance use, mental illness, and hoarding, and also that I would feel intensely for the people on the show. But I wanted to go into the sticky relationship between people and objects in the US, and ultimately felt Hoarders was the show for me to write through.

What does that look like or mean for you: “to write through”?

I mean going into the show in an immersive way, differently than passively watching it for entertainment. Chris Kraus once told me I “turn the shows inside out,” and I like that way of putting it.

I see the form of the poems kind of like those old paintings of aristocrats surrounded by their prize chalice or horse, only maximalist. It is important for the speaker’s words to flow directly into the objects with no punctuation separating them, so there is no separation between the person and the things, emphasizing how connected or entangled they really are. This also elevates the objects to a kind of speaking position, giving them a certain dignity, creating surprising images.

Do you think we’re, culturally, still capable of being surprised?

It’s true we are living in a moment of cynicism in the US, and that cynicism is partly a result of the collapsing of various forms of media into one: entertainment, news, social media, etc. It’s what I call our reality TV cultural condition. But what I like about art is that it always contains the capacity for surprise.

The names of the show’s titular Hoarders have been changed, though their locations are true to those revealed in the episodes. What did altering names allow you to do as a poet?

Renaming allowed me freedom to make the poems their own, with their own mood, spirit, questions. There are more changes than just renaming. The book is very much its own thing, attached to the show with cobwebs perhaps.

I love your writing for the way it balances excess and maximalism. What concerns did you have when you were looking at the stuff of the “Hoarders” world? In other words, how did you balance what you needed to show and what might detract from the hoarder’s voice?

Writing Hoarders was like piling many, many things in a shopping cart and making sure the eggs, which of course ended up on the bottom of the cart, didn’t get crushed. It was particularly important to find a balance with all the many objects in the book. I love lists, how they speak to late capitalist excess — but I controlled myself! Heidi Broadhead, my editor at Wave, helped with this. She’s an excellent editor.

Who would want the eggs to get crushed? What a useful metaphor for this method of making. There’s so much vulnerability and humanity in these poems, and that vulnerability is operating on two levels, as in Gary, a plant hoarder from Franklin, Indiana:

This is your job, you should be tough, you should be able to manage kitchen
table filled with cooking pots of water and ivy; tiny gnats swimming in the shade
of parlor palms

From what I presume is an abundance of hoarded material on the reality TV show, you isolate these stunning and evocative tableaux that feel very moving, memento mori, and in a way treat the hoarded material with the care and dignity that many of the hoarders espouse. What role did capturing that vulnerability play in writing these poems? In revising them?

I felt, writing through the show, that there’s a tenderness in wanting to save old plastic wrap or newspapers, these items destined for obsolescence, to stubbornly insist they are not trash. I’m not saying that is a functional perspective, only that it’s tender, there is a bruise to it. I’m glad that feeling of tenderness comes through in the poems, because it’s not really in the show’s presentation, which is so focused on pathology. Many people who hoard have felt thrown away themselves, by life, by fate, by America. On some level it makes sense you might want to rescue items from the same fate.

In reading about “Hoarders” (the show), the phrase “gross-out” is used. How do you approach the visceral, the bodily, the abject in the book?

I definitely don’t feel grossed out by anyone on the show or in my book. I come from a family that could be on a show like this one, so for me, I am approaching this as something close, like opening a door to a room where everything inside is a breath away from collapse. The way we deal with mental illness in the US is often othering, and I wanted to focus in my book on listening, on paying careful attention.

I also think Hoarders is very interested in the abject. We project ourselves onto our things, and they become a part of us. You’ll notice that some of the objects hoarded are bones, dirt, even human feces… all things that we are physically made of.

In Hoarders, Shelley says: “I know pretty much what I have, but it’s just gotten out of hand”: A moment like this invites the reader to think about her own hoarding or collecting tendencies. Do you relate to the habits of the characters in Hoarders?

My anxious attachment to objects started in childhood when I developed a fear of objects falling out of the car. I’d make my dad let me get out several times each trip to check for things that might have fallen in the road. In my twenties I compulsively shopped and hoarded clothing from thrift stores. There was a time when my bedroom was so full of clothes it was two feet deep, and you couldn’t walk around the bed. I also saved boxes of magazine clippings of celebrities I’d had on my wall years before that had faded and torn, and had tape all over them. The thought of parting with them frightened me for reasons that are difficult to articulate, something to do with wanting to hold on to every moment of my life, to defy the passage of time. I’m writing about some of this now in a new book, a natural bridge from Hoarders, I think.

“I love you, I love you, I love you, move out, I can’t stand you rotting apple, apple, apple; something in the peanut butter jar that isn’t peanut butter.” Linda, like so many of the characters, is haunted by trauma (an abusive husband) that becomes literalized. The dichotomy (goo and Yankee Candles), the juxtaposition of domesticity and decay, is often frightening, and these stanzas are like peering into rooms in a terrifying dollhouse. Were you thinking about horror while writing these poems?

Yes! I love that you picked up on that. Horror has its own nightmare-code, rooted in childhood fears. It’s this code I connect with. I often watch horror when I’m writing, with the sounds off, just letting the images run. It seeps into all my work.

That’s incredible — the horror film as a kind of endless image bank. What role does genre play in your writing? In Hoarders?

I sometimes call this reality TV genre I write in “literary television,” thinking through questions of seeing and spectatorship on the page. With Hoarders I also feel a kinship to absurdist literature, because as I wrote it the book became for me about life’s strangeness, questions that have no answers, circles we go around in.

The cataloguing in Hoarders is exquisite and staggering. (I’m thinking about the second poem in Shelley’s section, that begins “They all have different character Barbies…”) What is your note-taking process like? Do you impose rules for yourself while watching episodes that you’re working from? Walk me through the process of episode engagement.

I’m pausing an episode every few frames, writing everything down. In Hoarders there was so much to take down, some of it indistinguishable, just mounds of garbage. At first this overwhelmed me, and I wasn’t sure if I could make anything out of it. But after time and persistence I warmed up to the trash mounds and started to find them suggestive… I started to see things in the mush that my imagination invented. After that initial note-taking process, which took about a year and half, collecting my material to sculpt from, I moved in an intuitive way into the poems, not sticking to the notes but using them in various ways.

You, the writer, remain largely invisible in these pages. There’s never a moment where a lyric-I states something like, “I was watching Hoarders.” (That sounds so dull, just typing it.) But in thinking about your other work, constructing an alter ego or at least divorcing yourself from an autobiographical speaker is a common practice. Is that a conscious decision? Part of a bigger belief about what you see as your role as an artist?

Right now, I’m writing from my memories, and that’s in the first-person voice. But the Hoarders poems are character poems. They’re about these individuals and their objects. As for the writer, the person watching the TV, there’s this scene from the 1980s movie Poltergeist, when the little girl puts her hand on the TV screen, touches the TV static, and says, “They’re here!” I like to say that scene is the summation of my reality TV writing practice. I feel I’m that little girl getting sucked into the TV and becoming the static. I’m there, I’m everywhere, but I’m particles. 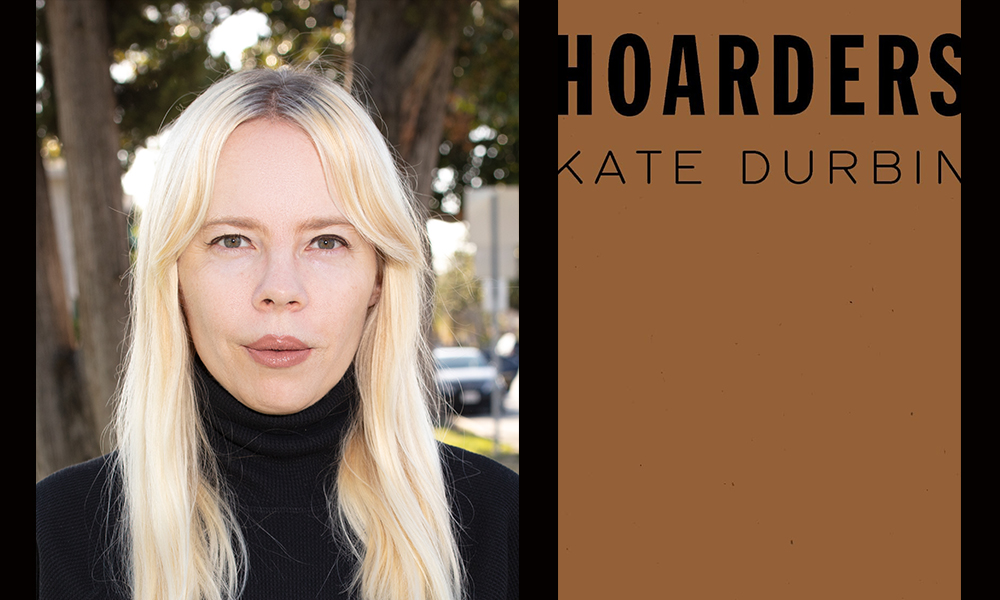