Hilary Plum is the author of Strawberry Fields, winner of the Fence Modern Prize in Prose (2018). She is also the co-editor of the Open Prose Series at Rescue Press, which published Andrea Lawlor’s Paul Takes the Form of a Mortal Girl (2017), recently a finalist for a Lambda Literary Award and a Firecracker Award. Here Plum and Lawlor discuss their recent novels, writing both poetry and prose, and how time and memory influence their work.

HILARY PLUM: Paul Takes the Form of a Mortal Girl takes place in the 1990s, amid the years of ACT-UP, Queer Nation, zines and mix tapes, that decade’s conversations about and incarnations of queer desire and politics and identity. You’ve said — a joke, but a serious one? — that the novel wasn’t historical fiction when you started it. I’ve been thinking about how slow novels are — slow and getting slower, in contrast to the increasing speed of our other media. A novel’s thinking is a slower kind of thinking, they’re slow to write, and not too fast to read.

I’ve been considering this because my own novel Strawberry Fields has just come out, in April 2018. I wrote much of it between 2011 and 2013, and its subjects reflect those years — the Iraq War, the Arab Spring, Occupy, the rise of private military contractors, drone warfare, the scarring rhetoric of the “war on terror,” evidence of climate crisis. As I revised it in the intervening years I felt the relentless motion and multiplication of these histories. Sometimes it seemed as if events that had occurred so violently and vividly were already slipping out of both public and private memory. Why does the recent past seem so far away?

I wonder what you have been thinking about time and the novel, maybe about the experience of creating something “then” and sharing it “now.”

ANDREA LAWLOR: Thanks to your question, I am now thinking about time as the paratext of the novel, and I have begun to be excitedly concerned about the dangers of reading novels. I love the idea that danger is one of the benefits of reading. I see this clearly in Strawberry Fields, in my sense of shock that so much time has already passed since Katrina or the Arab Spring or Occupy, which still feel fresh to me, which I am still trying to assimilate on some level. I wonder how younger readers will encounter this… as history? In the remove of historical fiction? Are the 2000s a subject for the period drama now?

I wonder that with Paul as well — will younger readers see in the early ‘90s the seeds of our contemporary moment of gender revolution, as I do? Part of aging, for those of us lucky enough to do it, is watching what we live through become other people’s history, and realizing that we all have access to troves of unrecorded information. I tend towards low-key hoarding of materials I fear will be forgotten (small press books, club flyers, political posters, cassette tapes, etc.) and tried to offload as much as I could into Paul’s world. My friend Allison Page, who works on digital media and algorithmic culture, talks about the period you’re writing about as “immaterial” in some ways. How do we remember in a time of relentless archiving, with relatively little curation?

For a long time, I was concerned that I’d written the novel so slowly that I’d missed my window, and no one would be interested in the ‘90s by the time the book came out. I wrote Paul very slowly and also over many years, beginning in 2003. I didn’t work straight through, not by any stretch, but I lived through all that time, and all that living changed me, changed my understanding about people. When I began writing, I was 30. I didn’t see myself as writing about a particular time; I was just writing about picking people up in bars (for instance), something then in my recent past. As I moved away from some of those scenes, I found myself thinking that I was perhaps writing about being in one’s 20s. Later I realized I’d spent half my 30s writing about my 20s. And now, in my 40s, I’m thinking about having spent my 30s writing about my 20s (and trying not to write about that but failing at the moment). Perhaps because of this experience, I look at you as a whiplash fast writer, and admire how fast you write such thoughtful and precise prose — three beautiful and serious books published in five years! I think my own slowness is exacerbated by teaching at a college, being on academic time, with its expectation that scholars work more slowly than journalists or pundits to understand even the recent past.

Two examples of time as the subject of a novel come to mind, where time is thematized through structure: Virginia Woolf’s To the Lighthouse (which telescopes time so stunningly in that middle section) and Samuel R. Delany’s Dark Reflections (Delany’s experiment with telling a story in reverse chronological order). I see that in your work as well, the way that time and structure are imbricated in each other, for instance in They Dragged Them Through the Streets.

They Dragged Them Through the Streets is about my own American generation’s experience of the Iraq War, understood in contrast to my parents’ generation, the Vietnam War and antiwar movement. The novel imagines a new Weather Underground, of a sort, a group of friends who protest the war in Iraq violently, through small bombings — which is, of course, a sustained intensity of protest that didn’t happen. So it’s an imagined history, an attempt to understand how that war — based on an obvious, cynical lie; in the face of history’s biggest protests, in February 2003 — could happen, and then could fail to matter more in the country that was perpetrating it and which through technology and media could have witnessed the violence of occupation hour by hour, year after year.

Maybe failures of attention are about what we choose (not) to see, and failures of memory are about how we lack a frame, a means to comprehend. Maybe the first failure is individual, the second collective?

So, yes — how does a novel re-envision time and how we know it? In fiction I think time manifests most potently in tone (To the Lighthouse, indeed). They Dragged Them has a tone of nostalgia and futility, looking back on a time (when the characters set off these bombs) that was more idealistic without being idealistic.

Now I think of your Paul and its portrayal of the ‘90s, how your novel carries a tone of the ‘90s newly back into the present. Paul is very funny, but I always think of the novel first as joyful. And joy is very powerful. The curiosity and playfulness of its hero (antihero?) — sex as newness, as the novel puts it. (Or, as Sarah Fonseca’s review says nicely, “Lawlor has coolly escorted sex back into conversations about gender, which have long been unmoored from fucking”). Hunger and mutuality and hope. The novel gives us a way to exist in that joy and see how it’s challenged. It gives us a frame, a structure for living in the present differently.

I guess what I’d say of Strawberry Fields is that this novel is about the idea of the frame especially. The novel is made up of glimpses: it’s “about” journalism and how the American reader encounters (or fails to) “news from elsewhere.” There are dozens of quick stories set all over the world and from rapidly varying perspectives, but maybe all of them are a sort of moment that journalism can’t really get at or readers don’t or won’t grasp. So the novel is about being in the present, or in the presence of something now — it takes place amid wars, amid significant historical events, all the immediacy we want journalism to “report back” from — and how we’re still not there.

Yes! That’s the exact feeling I have reading these glimpses — just when I begin to think I’ve got unmediated access to Alice or Marie or any of the speakers, something boots me out, reminds me of the impossibility of knowing. In a way this novel is an epistemology of knowledge-production. How did you come to write about the inner lives of journalists? Can you talk about the kinds of research you did for Strawberry Fields?

I think the novel was a way to try to understand what the point of fiction was in relation to journalism. That sounds naive but maybe novels (at least mine) often start in a naive, even embarrassing feeling or question. I was reading the news so much in those years — feeling this deep need for and dependence on journalism — and wanted to know what literature could offer, what literature could do that journalism might need. So I tried to figure it out.

I read a lot — books and articles and reportage — but it rarely felt like I was doing research for a novel, exactly. Instead it felt like the novel was a means, a place, to understand what I was reading and to comprehend the experience of reading the news — how to come to terms with the ways that experience is mediated, maybe how to build an ethics of reading.

And now what’s embarrassing is that I can’t say much about how the resulting book answers that first question, about fiction and journalism. It’s like you as the writer don’t remember what you put in the time capsule either.

And this makes me wonder what you’re working on now, what’s happening in your reading and writing. You have a chapbook of poems called Position Papers — are these part of a larger project? I’m curious too, to extend the thoughts on genre above, about what makes us so-called fiction writers turn to other forms, what we want or need from different genres.

I began writing Position Papers, as I was finishing Paul, in Dara Wier’s poetry workshop, and discovered I liked the feeling of finishing something. Position Papers imagines little chunks of a near-future seceded Western Mass as anarchist queer ecotopia. And then, back to paratext: the timing of the publications meant that the newer work circulated first, and to some extent framed the older work. The obvious contrasts of the two projects (poetry/prose, future/past, totally honorable therapized present self/fucked-up past self) don’t hold up, of course, since, among other things, time isn’t linear. And perhaps unsurprisingly, I am now wondering if this ongoing series is actually a novel.

Speaking of which, I’ve been enjoying reading Strawberry Fields while re-reading your memoir Watchfires, which feels in some ways like the DVD extras of the DVD extras (dated reference!). Were you writing those books at roughly the same time? How did that work? What are you working on now?

Those books, too, came out in reverse order of how I wrote them. Strawberry Fields had an especially long path toward publication, with a lot of rejection along the way. And now it’s a fuller work through the editing of Rebecca Wolff and by getting to join the conversation happening at Fence. Really I asked you that question about poetry because I’ve been trying to write poetry, and I feel disoriented. I like thinking about this description of Position Papers and how the poem lets you just start there, in the moment of the ecotopia, without building the whole world around it and how it came to be, just letting the place talk to itself. Just, what would it be like if. And the novel version is maybe the then — if, then… And all the problems of time rush in through the door. 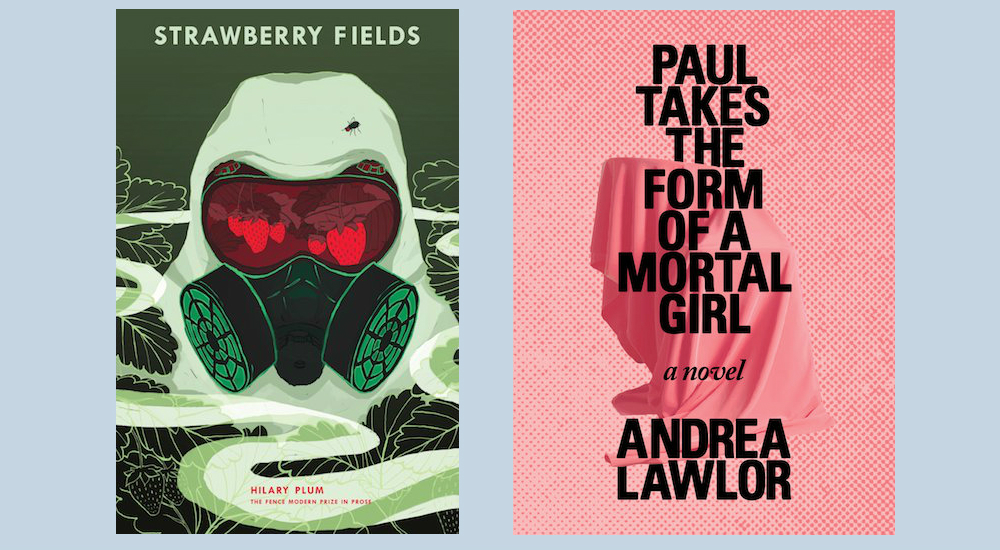