I remember visiting Washington University in St. Louis’s MFA program as a prospective student and hearing JoAnna Novak read. Her work was so impressive, so lyrical, sharp, sad, funny. After Wash U, she went on to get a second MFA in poetry and to start Tammy, a small press.

I admire the range of her work. She’s a novelist, poet, essayist, editor, and teacher, and she’s one of the most productive people I know. Sometimes, I think about what she would do as I slowly move from a chair to a couch, sluggishly thinking about a writing project. And, sometimes, thinking about this inspires me.

JoAnna Novak’s debut story collection Meaningful Work won FC2’s Ronald Sukenick Prize, and it’s coming out this month with blurbs from Junot Díaz, Aimee Bender, David Leavitt, and Joanna Ruocca. I imagine that writing this collection felt to her like a mouthful of pop-rocks and blood. That is what it felt like reading it at times.

KATYA APEKINA: I had a friend who said after she stopped purging with food she began to shoplift compulsively and then gave away the things she stole. To her it had felt like part of the same mechanism. You’ve talked openly in previous interviews about your experience with eating disorders. Do you feel that there is some underlying mechanism in them that is also in your writing process?

JOANNA NOVAK: The pull between minimal/spare/restrictive and maximal/baroque/indulgent in my writing on the level of the sentence, perhaps even the word — this stylistic tendency echoes something of starving and bingeing and purging. A teacher observed this in my writing when I was in grad school, and I found it illuminating and unnerving, one of those workshop insights that reveals your own psychology and how baldly it manifests in your work.

It seems like the obsessive nature of the eating disorder becomes a narrow lens that structures the way some of the characters see the world. It also feels like its own morality. Does that seem accurate? Is this different from other stories of addiction?

Good foods, bad foods, do eat this, don’t eat this, thin right, fat wrong — if I think about morality in reductive terms, like, what’s right and what’s wrong, then, yes, the eating disorder does reproduce a morality. Even when the stories are not explicitly about eating disorders, that morality infects the narrative voice, the tone, certainly the kind of noticing that happens — there is a lot of hyperfocusing with an eating disorder. But there are also many blindspots, things or people or issues one doesn’t — or forgets how to — pay attention to. Very few of these stories were written when I was in the worst of my eating disorder, yet they replicate some of the cognitive patterns. Obsessive thoughts, spiraling or snowballing (for me, an anxiety thing and an eating disorder thing), the noticing, a sort of judgmental angel/devil on the shoulder.

I’m not sure about other stories of addiction — I haven’t read many, Requiem for a Dream, Nightmare Alley, probably more. Those are punishing narratives. Addiction lowers the character, forces them into acts of debasement or destroys them. Of course, eating disorders can do all that, too, but I’m suspicious of narratives that too neatly offer resolution, salvation, or damnation. I’m too devoted to ambiguity.

In the collection, there are Spanish nuns, a priest brother, a saint’s obsession, prayer candles burning as a character vomits so hard she almost goes blind from bursting blood vessels in her eyes. How influenced were you by Catholicism? How connected do you see the ceremony and deprivation these characters have around eating disorders (e.g., the daily bottles of Mountain Dew described by the narrator of the title story as sacred and ceremonious) with the kinds of deprivations experienced by nuns and saints?

I grew up going to Mass and CCD every week, and sometimes my mother would take us to new churches (outside our parish) simply for the architecture, the stained glass. I loved the prettiness of it, and the prettiness necessitated ceremony, ritual, and many of those rituals were around corporality: “This is my body, given up for you.” All that incantation, this surreality around desire and transcendence and submission. I like the constraint of being held still with intense feelings. And Mass was like this mental obstacle course: How deeply could I focus on the gospel? How much could I dissolve my voice into the congregations during Hallelujahs? How long could I hold the Eucharist in my mouth during Communion? And then the iconography, the depictions of women: Bernini’s Ecstasy of Saint Teresa, all that jouissance. The Virgin Mary was my first girl crush.

But you’re right, there are shoutouts to Catherine of Siena and the other ascetic saints I learned about reading Joan Jacobs Brumberg’s Fasting Girls: The Emergence of Anorexia Nervosa as a Modern Disease and Rudolph Bell’s Holy Anorexia. For these characters, rituals, like the Mountain Dew, bring order to the chaos of a day; they’re indulgences in the throes of labor (a shift, a fast, etc.); and, most importantly, they’re secrets — no one might know everything tied up in that a bottle of Mountain Dew.

In several of the stories the narrator is named JoAnna, and in some of the other stories the characters have a similar last name to yours. Were you thinking of those stories as autofiction? Does giving the characters your own name imbue them with something as you are writing them? Or alter your relationship to them in some way?

Autofiction before I knew the word, for sure. Using “Joanna,” (a common misspelling of my name) lets me visit worlds I know (restaurant kitchen, etc.) and feel comfortable remaking them; it also lets me access shame, guilt, discomfort, insecurity, rage, lust, jealousy, fear, everything I try to hide from — which is what Gordon Lish says one should write from.

Many of the stories center on intense adolescent female friendships. Do you think those come with an expiration date built in? I remember the heartbreak of my friend breaking up with me being more painful than a romantic breakup. What attracts you about this subject?

Oh, the friend breakup — yes, the worst, totally devastating. I keep coming back to (fraught) female friendships because, in their most intense and intimate moments, they seem so all-knowing, so permanent. Especially when those friendships were tended to daily, like they were in middle school or high school, where you were tethered to your friends throughout the school day, and then messaged or talked to them all afternoon, all night — there are things friends know about you that a romantic partner couldn’t, that a parent wouldn’t… and now it’s striking me that there’s only an “r” separating partner and parent. You have a responsibility to a partner, the same way you demonstrate responsibility to a parent, maybe. With a close friend, there’s this sense of freedom, looseness, like anything goes, anything is acceptable, their devotion to you is unconditional (within reason). When that unconditional is conditionalized, it tears out your heart.

Mothers! I think in that book, Women Who Run with Wolves, I read that fairytales need dead mothers so the main character can self-actualize. The mothers in these stories are, if not dead, then distant and ambivalent. But I’m not sure if they are that for that same purpose. What purpose do you think your mothers serve in the stories? And, has having a child of your own changed anything about how you think about or write motherhood?

The mothers in these stories are unattainable. (Motherhood, as an abstract concept, is as well.) They’re averse to nurturing, allergic to coddling. I’m tempted to say they exist to be the protagonists’ nemeses, but it’s not that cut and dry. Instead, their distance activates the protagonists’ desire. Feeling too much, messed up, intensely > unfeeling, dispassionate.

Having a child has completely changed how I write and think about motherhood. I write closer to the body, closer to love, closer to positivity. Really, I am ashamed at how limited I believed the experience of mothering could be.

I had a friend who said that when she was little, when her mother would spank her, my friend would pretend to like it, and this creeped her mother out enough that she never spanked her again. By choosing to like this violation, she got control over it. There are several characters who reframe sexual trauma as pleasure here — is that a way to get back control over it, or is that too reductive? Can you talk about it?

That’s amazing — both the friend’s action and the mother’s response, actually.

Reframing any trauma, sexual or otherwise, seems to me some of the most compelling work of writing, of art. And my favorite art is art that overlays beauty — excessive beauty, often — with bleak, terrible horror. I learned this from film: old Disney movies, like Sleeping Beauty. Sofia Coppola’s work in The Virgin Suicides or Sean Baker’s The Florida Project. I don’t think it’s too reductive to think about taking back control by reclaiming a narrative of sexual trauma. I mean, these are characters who either eroticize sexual assault or treat it blasély. Both responses seem like acts of performance, performance as a mode of survival. I am interested in that act of self-creation, the urgency in it. But I also think I write about characters who are attracted to pain, who crave what they’ve been taught to be afraid of, who reject a certain dogma of empowerment and self love, who pride themselves on their resilience.

Who were your influences when you were writing these? What writing/film/art do you feel is in conversation with this collection?

I hadn’t yet seen Daisies (dir. Věra Chytilová, 1966) when I finished this collection, but that film is this book’s blood sister BFF. Two teenage girls, listless and spoiled, decide to ravage food, clothing, men, mansions — all while wearing semi-matching shifts. That anarchic, dark humor is something I am very drawn to. Also ruin. So, Grey Gardens, too. And then, writers who disrupt our expectations of the balance of summary and scene (Junot Díaz’s story “Alma,” David Foster Wallace’s “The Depressed Person,” everything Diane Williams). When I am unsure of the world, I read Garielle Lutz: my work is certainly talking to hers. Christine Shan Shan Hou’s poems in The Joy and Terror Are Both in the Swallowing speak to this attraction/repulsion to death, with a lot of grim food and material texture, velvet. 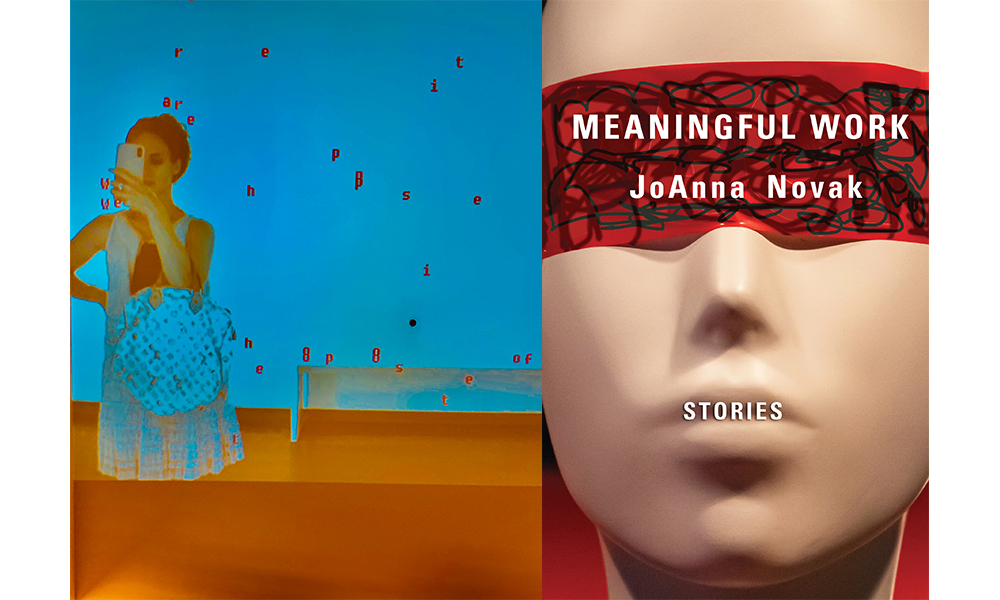