“Each of us is born with a box of matches inside us but we can’t strike them all by ourselves,” wrote the Mexican novelist and screenwriter Laura Esquivel. Celeste’s Ng latest novel Little Fires Everywhere, following the success of her debut novel Everything I Never Told You in 2014, begins with the mystery of a burning house. Explorations of race, identity, morality, family secrets, and the meaning of motherhood all contribute to striking the final match that sets the small town in Ohio ablaze.

Little Fires Everywhere is set in 1990s Shaker Heights, Ohio, a town which thrives off careful planning and structure, and whose inhabitants operate in much the same way. We are introduced to an array of mothers who handle motherhood differently. There’s Elena Richardson, the one who, by society’s standards, appears to have it all: a career, a successful husband, strong bonds with her children (with the exception of Izzy, the black sheep of the family who refuses to conform to their upper middle-class lifestyle). There’s Mia, a free-spirited single mother and nomadic artist who doesn’t abide by anyone’s rules but her own. And there’s Bebe Chow, the Chinese woman who befriends Mia after being forced to leave her child behind because she doesn’t have the means to raise her on her own.

Little Fires Everywhere is rooted in duplicity and omission, and the novel expertly navigates the intricacies of familial relationships and motherhood, and also explores the topic of transracial adoption, one not fully represented in mainstream literature. Shaker Heights becomes divided once we meet Linda McCullough — a woman who wants nothing more than to bear children of her own, but can’t — who decides to go forth with adopting a Chinese American baby girl. In Little Fires Everywhere, blood relations aren’t necessarily stronger than the bonds you foster with people whose paths you cross.

Last November, PEN Center USA’s Book Club closed out the year with Little Fires Everywhere. Angela Morales, author of Girls in My Town, moderated the discussion at The Edison in downtown Los Angeles, and book club members discussed everything from how Ng carefully considers the difficult relationships between women, the societal expectations women are to uphold, and the classist undertones the novel also explores. Morales also accurately elucidated a unifying theme in the novel: “disruption is necessary for change.”

To bring Celeste Ng’s novel to life, actress Reese Witherspoon and Kerry Washington are teaming up to create a limited series for Hulu. We’ll continue to follow the fallout of Shaker Heights caused by the arrival of a single mother and her daughter, and the custody battle of a Chinese American baby that makes a community reassess what it means to be a mother.

PAMELA AVILA: The setting of the novel — Shaker Heights, Ohio — is also your hometown. Why did you decide for it to take place there? How was it growing up there?

CELESTE NG: I’d been away from Shaker Heights for about a decade, and with that distance I had a bit more perspective on the city — it’s easier, after you’ve been away for a while, to see both the good and the less-good about any place. I appreciated more all the ways Shaker Heights is unusual, and I wanted to try and write a story that would explore some of those facets of the community. The truth is, I loved growing up there: it was a great place to be a kid, and it shaped so much of who I am and how I think. Not every town, for instance, tries to get its kids to talk openly about race relations, or explicitly brings them up to try to make the world a better place. I’ve never found another community quite like it, and I didn’t realize that it’s truly unique until I moved away. Quite a few of my high school classmates have moved back to raise their children there, and I can totally understand why.

Is there a particular character in Little Fires Everywhere,or an experience they went through, that you relate to?

Like most authors, I relate to all of the characters in the book, just in different ways. There are parts of me in both Mrs. Richardson and Mia, for example — I appreciate Mia’s artistic nature, as I’m a creative person myself, but I have to admit I’m also a planner like Mrs. Richardson, and would like nothing better if I could prevent every disaster through careful forethought. Similarly, there’s a bit of me in each of the kids — I’d have loved to have been as confident as Lexie and as cool as Trip, but I was much more like Moody and Pearl in high school: shy, bookish, and rather awkward. Izzy says and does all the things I’d do if I had fewer inhibitions.

Throughout the novel, we obviously get to know a lot about the women of Shaker Heights and their children — but we don’t learn much about the men alongside these women. They’re almost absent characters. Can you speak more about the reasoning behind that?

The book is about mothers and women, and the expectations we have — both reasonable and not — about how mothers should be and how they should behave. So I focused on the mothers. There are plenty of books and writers who focus on men and their stories; frankly, I’m not especially concerned that those stories are going to be ignored or overlooked. It’s odd to me to focus on the absence of men, rather than the presence of women — as if a novel about women is (or should be) an oddity, as if it’s lacking something. That’s a viewpoint that’s all too common in our culture, and one I’d like to change.

You explore the complicated relationship of jealousy and resentment between Elena Richardson and Mia Warren. Mia experienced life differently than Mrs. Richardson, perhaps in a way that Mrs. Richardson dreamt for herself once. What do you hope your readers extract from their relationship?

Very often, women in fiction are held up as either bitter enemies or as complete BFFs. Neither of those portrayals is very complicated, very interesting, or very true. Much more common — and to my mind, interesting — is the middle ground, in which we find ourselves both drawn to and troubled by another person. And actually, we’re often most intrigued by people who seem to be living the lives we ourselves turned down or missed out on. That push and pull isn’t often seen in fiction, and I think it should be.

What led you to explore transracial adoption in this book?

Because those issues of class and race and motherhood are all related in my mind, transracial adoption came to mind because it touches on all of them at once. Many adoptions today are transracial, which raises really complicated questions about how we handle and talk about race — and racial bias — in America. The first adoptions from China were just starting in the mid-1990s, when the novel is set, once China opened itself to international adoption, and I remember seeing many little Chinese girls in white families and feeling a mix of emotions: joy that these girls had found loving homes, combined with anxiety about how the rest of the country would see and treat them and their families. Growing up while being visibly different can have a huge impact on you — I know this from being one of every few Asians in my community, and it might be even more difficult to parse those aspects of identity when the difference is within your own family. I wanted to get right into that messiness and ask questions, rather than provide answers, about all of that.

There was a comment that really stood out to me from the PEN Center USA Book Club meeting. A member said, “no one was really who they wanted to be.” There was always this sadness and longing that loomed over the people of Shaker Heights. Would you agree with this reading of your novel?

Is anyone ever really who they want to be? I haven’t yet met anyone who is — even when they think they are. It’s human nature to long for things — to long to be different from what you are, to long for something other than what you have — and that’s the engine that drives all good fiction. If you got everything you longed for, life would be pretty boring.

Another message we get from Little FiresEverywhere is that “disruption is necessary for change.” How do you think this message resonates with our current political climate? How can people cause little fires of their own to ignite change?

I wrote this novel from 2010 or so to the spring of 2016 — so in a very different political climate and, largely, an era in which the idea of “President Trump” would have been laughable, or at least more laughable than it is now. So it’s interesting that the novel has such a resonance in our current sociopolitical era, a time when many people are having to face hard questions about race, class, and gender in our country and decide whether they’ll let these problems stand as they are, or if they’ll work to make things better.

There’s a moment in the novel where Mia asks: “What are you going to do about it?” That’s a question I ask myself, and others, frequently. Change never happens without action — Newton was right, even when we’re talking metaphorically. Even the most gradual changes — whether we’re talking about changes in opinion, changes in policy, or biological evolution — happen in response to some kind of pressure, often a small one. One of the biggest barriers to change is the feeling that what you can do won’t be enough. But the truth is that even very small actions can ripple outwards and have huge and far-reaching effects. In other words, the fires you start can be little, but don’t think they don’t matter, or that they won’t spread. 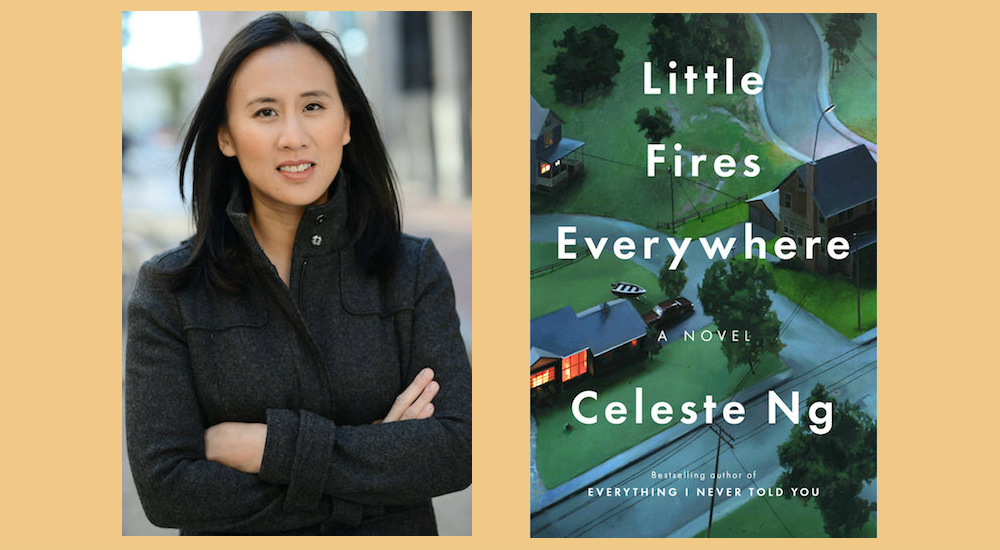