Marilyn Macron is a practicing attorney and promoter of reading under The Literary Chick™. Here, she talks with Stefan Kiesbye about his latest book, Berlingeles. Berlingeles is a move towards cyberpunk, a genre that is new to Kiesbye, who has worked mostly in the German Gothic vein. In Berlingeles, Kiesbye gives us a Los Angeles on the precipice of a civil war, superimposing the upheaval of Germany and its resulting Wall on the City of Angels through a cyberpunk lens. Kiesbye was the recipient of the Low Fidelity Press Novella Award and teaches creative writing at Sonoma State University.  He and his wife Sanaz live with their two dogs near Santa Rosa, California.

MARILYN MACRON: Berlingeles is quite a different ride than your German Gothic tales. Cyberpunk, apocalyptic, dystopian, social commentary, political, what would you categorize it as?

STEFAN KIESBYE: The book is all that, but those categories are usually hindsight, once you think about marketing the book. And usually it’s your publisher who puts the book into a category to maximize sales. I started with K., who wants to stay alive to be reunited with his erstwhile lover, B., and the apocalyptic and dystopian developed because I was trying to figure out where K. would live, and what I thought might happen to Los Angeles in the future. I’m a pessimist — we’re not confronting the great problems of our time, from environmental disasters to a reemergence of the right, racism, and discrimination; we’re hiding. Berlingeles gives that pessimism a shape.

What inspired you to write this?

To some degree it’s my curiosity about what will happen once I’m gone from this planet. I’m very attached to this world, and scientists and the tech community are taking steps to prolong human life. K. is desperate to see B. again — after spending forty years apart — and he does what it takes to keep his limbs moving, to keep his hearing and eyesight intact. He’s afraid he’ll die before his life is completed. That fear really drives the book.

What comparable trauma do you see with the culture or populace of Berlin and Los Angeles that would give you the idea to create a story about a civil war and a Wall in Los Angeles?

Berlin and Los Angeles are cities that attract young people with outsized dreams. A few are fulfilled, and many of those dreams die young. Others stick around and fade slowly, some end messily. And both cities show gaps between their reputation and reality. They always seem more — more vibrant, more important, more global — than they truly are. They are never quite sure of their place in the world. Both cities feel like impostors — LA’s dreams are invaded and ridiculed by New York, Berlin is afraid it will never be Paris or London. And yet, they also infuse their citizens’ life with meaning, with a sensation of “we’re part of something big.”

Berlin and LA, to me, display lifestyles atypical to the rest of the country. The sensation of living on an island is mostly cultural. In West Berlin from 1961-89, there was, of course, a physical barrier, but the main difference was not the Wall, it was the way Berliners felt excused from Nazi atrocities. It was about showcasing Western democracy in the middle of East Germany. West Berlin created its own myth and lifestyle — David Bowie resided in the Dschungel, Peter Gabriel and U2 and Depeche Mode recorded in the city. Berlin was a feeling, a statement, a terminally ill patient everybody wanted to hold hands with.

Los Angeles is not enclosed by a wall, but by the desert. It’s a city that shouldn’t “be there.” It’s the capital of gated communities, of people moving behind walls to feel safe. It’s money that buys you a spot in a small enclave of people with similar incomes. The better the money, the higher the wall. Then there’s the odd phenomenon of people not leaving their neighborhoods. When we moved from Koreatown to Long Beach, we lost all our friends, as though there really was a wall around the neighborhoods.

Berlin was too important to be abandoned by the West. Similarly, if America were to be divided geographically, I don’t think either side would willingly surrender Los Angeles. As K. writes to B., “LA was the center of dreams, making up the narratives for the whole nation. A body needs to rest and dream, and how could America ever rest again without Los Angeles providing its dreams?”

In some of your other works such as Knives, Forks, Scissors, Flames and Your House Is On Fire Your Children All Gone, there is a tension in the villages that appears it could ignite into Elias Canetti’s worst mob mentality scenarios in Crowds and Power.  Is it the urban nature of cities as opposed to villages that brought that latent threat in your previous books to this cataclysmic point?

Mobs can build everywhere, but the power in towns and villages is more absolute. Most often, the violence is not directed at destroying institutions. A small town is more homogenous, so violence is turned against the outsider, the witch, the “other.” That “other” can be erased quickly and without a trace.

In cities, violence and power are fractured and can cause the system to fracture. Nothing can be concluded quickly. Violence can spread and set other communities ablaze. Violence in cities is less personal and not easily quelled. It’s also more destructive. Villagers own their village and want to preserve it, but nobody owns large cities.

The Fleece seems to indicate an augmented reality. How would you define The Fleece?

It’s a fluid and more absolute form of cyberspace, a repository of information, misinformation, dreams and personal channels. The Fleece also adds to the visible city, erecting digital monuments, houses, facades. It has its hidden corners, its walls, digital animals and vehicles. There’s one city outside the Fleece, and a different one inside. Yet since Los Angeles is riddled with poverty, the Fleece isn’t seamless or perfect. There are gaps and ghost storms.

Why are K. and B. the only characters who are referred to by only their initials?

Traditionally, using only initials in literature signified a kind of delicacy, secrecy (for example, in Heinrich von Kleist’s The Marquise of O…). The conceit was that the names, if fully published, would be recognized, and the story could cause a scandal. It made the narrative feel more authentic. So the use of initials in Berlingeles is definitely a nostalgic nod. In K.’s and B.’s particular case it’s very fitting, since their love was never publicly acknowledged out of fear it would destroy their marriages. Waiting most of his life for B., K. has become the idea of himself. He has ceased to exist as a person, is waiting to become a person yet again.

The story is told from multiple points of view.  What made you create and employ these characters to tell it?

I love that none of the characters ‘exist.’ They appear in public, and yet they don’t have a public life. Sophie, the prostitute, is being chauffeured through the city, only to be seen in confined spaces. Gaz, the young thug, is in love with the Maze and the Tunnel, and only underground, away from prying eyes, does he feel like himself. In order to be successful at robbing and even killing people, he needs to be invisible. The most extreme case is Sophie’s grandmother Ida, who is long dead, but still bosses her granddaughter around. None of the characters own their identity, and yet their lives continue and expand and collide.

The characters in many of your books are often described as having what could be considered odd or jarring physical characteristics and in this book, real mutilations.  Why is that?  In Berlingeles, is any of it because of the radioactive fallout from the nuclear explosion in Texas?

The fallout will contribute to it later, but the event is a recent one in the book, and the results will only become visible later. What I’m fascinated by, though, are how people create an identity based on looks. How we create a ranking system according to physical attributes. Once you don’t fit that system anymore — because of abnormalities, mutilations, or other reasons — you become both, extremely visible and invisible. You stick out, and yet nobody wants to look at you. You are able to/forced to construct an identity that is outside our normal system. That freedom is terrifying. Shakespeare’s Richard III is such a character. He can’t win anyone over with his appearance, but that gives him the power to manipulate the people around him. K., with his artificial limbs and savagely scarred skin, is waiting for the only person who will still recognize him as a body. His only chance at being seen is B. All other human connections have been severed.

In the story, the band Neuwerk released the concept album Berlingeles linking the history of the two cities.  How would you imagine this album to sound?

If the Velvet Underground, Kraftwerk, Einstürzende Neubauten, Section 25, Françoise Hardy, and Father John Misty got together and worked on an album, it might approach that sound.

To come around to you, what books made an impression on you as a child? Teenager? And what has hit you especially hard as an adult?

As a teenager, I was in love with Otfried Preußler’s Krabat, a novel (based on old legends) about a cursed Mill and the thirteen apprentices in service of dark forces. But for a long time I read mostly crime novels. Everything from Dorothy L. Sayers to Dashiell Hammett. I was drawn to things that happen outside of what should happen. Things that don’t have a “place” in our society because they are too dark, too inappropriate to talk about. Some of the literary novels I admire go much further than any crime story I’ve ever read — Jerzy Kosinski’s The Painted Bird; Agota Kristof’s The Notebook; Jeannette Winterson’s The Passion.

If you could select one book to be required reading on a high school curriculum, what would it be?

Roberto Bolaño’s 2666, because the book never strives to be efficient. The world is recognizable ours, and yet the ways in which Bolaño captures it are full of detours, strewn with revelations that make the reader feel alive to the multitude of voices around us. There’s nothing to “get,” no easy message, no moralizing, no redemption. You have to be along for the ride. 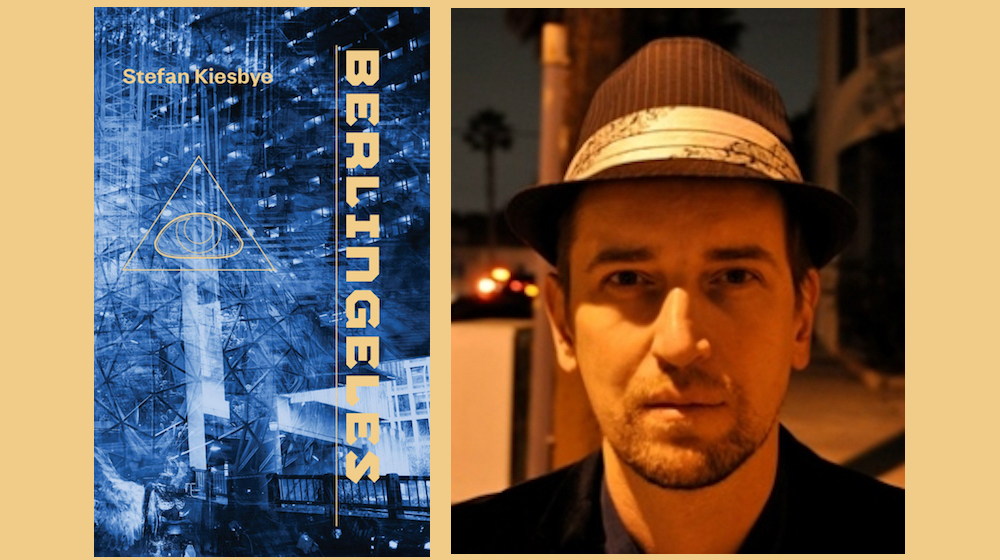