For the past five years, Avidly has been one of the most original, surprising, and entertaining venues for cultural criticism and personal narrative on the web. Founded by Sarah Mesle and Sarah Blackwood in 2012, Avidly has brought us essays on everything from Ernest Shackleton’s “Chilly Ponies” and weird sex to Brexit and Dylann Roof. Now Sarah and Sarah are bringing their sui generis editorial sensibility to a new book imprint, Avidly Reads, to be published under the auspices of NYU Press beginning in 2019. The first three titles — Jordan Stein’s Avidly Reads: Theory, Eric Thurm’s Avidly Reads: Board Games, and Kathryn Bond Stockton’s Avidly Reads: Making Out — have just been announced (and are described in detail below). I emailed the Sarahs to find out more about what they have in store.

You’ve been running Avidly as a website since 2012. What made you want to publish a line of books — and why now? What can you do with books that you can’t do with essays?

We started the website for mostly selfish reasons: we wanted a place where we could publish writing about the the things we were obsessed with in 2012 — i.e., Adam Lambert, Twilight, and Carly Rae Jepsen! We had stuff to say, and we felt like our friends had stuff to say, about how the strange depths of archival knowledge so many of us had collided and fizzed with the contemporary world around us; we wanted a place for writing that approximated the heady feeling of arguing with a beloved friend in a bar about a piece of culture about which you have very deep feelings.

With Avidly, we were going for a specific mix of tone and topic. But we were also trying to create a space for writing that would take a specific amount of time — which is to say, the kind of writing that we could squeeze in between the demands of teaching and parenting and running around to get the groceries and whatever else can make sitting down to write impossible.

So then why a book series? Partly, some more time opened up for us, and we wanted to fill it by giving some of our writers a chance to explore something bigger than just a single song or movie or even TV show. Our tagline for the Avidly Reads series is: “a series of short books about how culture makes us feel,” and each book will get after not just a particular event, but rather what we’re calling a cultural phenomenon. (So like: not Jane Eyre, but rather, “Girl Books” or “Madwomen,” or even “Empire Waists.”)

And of course, books make different demands on their readers than websites; books tie individuals more fully to the story being told. The Avidly Reads books synthesize the associative quality of online conversation with the absorptive nature of books: longer to write, longer to read, enjoyed in different spaces, all anchored by a clear and specific personal voice.

The first three titles you’ve announced — Avidly Reads: Making Out, Board Games, and Theory — all have a strong element of personal narrative. Is this a prerequisite for what you want Avidly Reads to do: combining the critical with the personal?

Yes! And we’re so excited to open the series with these three really different but equally strong-voiced projects. For our first books we wanted to show off the breadth of what we want Avidly Reads to do — although “board games” and “theory” seem very different, both are intense parts of people’s lives that cross the wires of the intellectual, the social, and the emotional, and when you have a strong, charismatic, expert voice braiding those experiences together, the deep feelings connecting these different kinds of cultural phenomenon become clear. What board games and theory have in common isn’t necessarily how they move us, exactly, but rather the fact that they do move us. So again, the short answer to your question is that, yes, it’s really impossible to write an Avidly Reads book without bringing your personal investment to the table, and our first three books are really fantastically able to do just that.

And we’re excited to brag on these books! Here’s a quick preview of what’s in store for readers:

Jordan Stein’s Avidly Reads: Theory tells his own personal history of “reading theory in the 90s” by confronting a seeming contradiction: that the abstract and often anxiety- and frustration-producing rigors of “theory,” created, for him and his friends an entirely different range of emotions: intimate, tender, nourishing. Organized around five ways of feeling — silly, stupid, sexy, seething, stuck — this book travels back to the late-90s to tell a story of friends coming of age at a particular but still resonant moment in the emotional life of American ideas.

Eric Thurm’s Avidly Reads: Board Games is also about the strange ways communities get made and unmade around an activity — playing board games, rather than reading books — that nominally serves a different function. Thurm digs deep into his own experience as a gamer to limn the borders of the emotional and social rules that board games create and reveal, and tells a series of stories about the pastime that’s closest to his own family, thinking through his ongoing rivalries with his siblings and parsing the ways games both upset and enforce hierarchies, values, and relationships on multiple scales, from the familial to the geopolitical.

Kathryn Bond Stockton’s Avidly Reads: Making Out is the most intimate of our first batch of books. Stockton tells a story about kissing — as she fantasized about it in her childhood and finds pleasure in it in her adulthood. Her story merges the multiple valences of the phrase “making out”: kissing, interpreting, and surviving, as a young queer person growing up without models of what it meant to be intimate, be a queer self, in the world. Tracing her experiences as a child at the nascence of the modern queer movement but substantially prior to its contemporary recognition of trans life, allows Stockton, a leading scholar of queer studies, to offer a personal history of how the emerging concepts of queer social and intellectual life trickled into human experience through the act and witnessing of the kiss.

The series is called “Avidly Reads,” but of the first three titles you’ve announced only Theory refers to something most people would think of as a “text.” What does “reading” mean to you? How do you “read” something like “making out”?

Reading, to us, is equal parts understanding and interpretation, and it’s really promiscuous in its objects! And reading is also just an immersive pleasure. One thing that’s been really central to our project since the beginning of Avidly is recognizing that close reading is a shared tactic for both formal criticism and the internet’s thriving fan communities, and we are so into it. We basically think that reading things really closely is how you love them, whether those “things” are books or movies or games or someone’s really excellent outfit.

The other thing to say though is that obviously these books, being books, are just as much about writing as reading, and our whole goal is to make books that are fun to both read and write. We wanted to make a space not just for pleasure reading, but for pleasure writing! And we think the line between those two things is more interesting, and more blurred, than is often recognized.

There are lots of series of short books being published these days. Any other series that you particularly like, or want to use as models for Avidly Reads?

The 33 ⅓ books are, to us, one of the ur-short book series: we love those books’ combination of storytelling and deep, kind of nerdy, knowledgeable love for their subjects. We also love and admire the Object Lessons series, and how that series has offered a model for a sort of middle distance scholarship.

In general, we are just really excited about the short book as a unique form itself — something that’s not just a shorter version of a longer thing (whether an academic monograph or whatever other non fiction mode). Long books are really good at some things — explaining, intervening (in fields, in conversations) — and we didn’t want to try to tackle those same tasks. Instead, we want the Avidly Reads series to take the “shortness” of the short book as stimulating discipline, a unique occasion categorically different from the monograph. Short books require a fundamentally different commitment of time from both writer and reader; a short book prioritizes perspective and exchange and is geared towards provoking dialogue. And we really want to keep that conversational quality of the Avidly experience. In our pitch to NYU we said that we wanted to make books that are “attractive to readers whether in the classroom, book club, coffee shop, or bar.” We hope that’s what we’re doing!

What should writers who want to pitch you ideas for books know about what you’re looking for?

Storytelling! Personality and charisma. We want to publish provocative books that are anchored in a whole person, rather than floating in some neutral, objective space of pure intellect. Obviously this impulse reflects our backgrounds as academics — in some of the scholarly writing we do, we’re asked to leave our feelings about our subjects behind to foreground the complexity of what those subjects are.  And we’re so committed to scholarship, its work in the world — but we want Avidly Reads to do something different. (One thing to say, though, is that if you have a personal experience or insight that emerged at the edges of an academic project, and that had to be left on the cutting room floor — like, say, did you have an intense time explaining your monograph to your grandmother? — that might be an Avidly Reads topic.)

And also, we’re looking for books that hit a bit of a sweet spot in their topics, which should be both immediately recognizable and solicitous of deep feelings in many others but also a little bit surprising, a topic that you really think of as your thing, your obsession. One way to get at this is that topic should come from the world, not from an idea or an argument. We would love to read your article about, say, how Bride of Frankenstein reflected 1920s birth practices (like, for real!!) but that’s not what we’re doing here. On the other hand, you should totally pitch us your book Avidly Reads: Horror Movies, because those are so intense and also mystifying to us, still, and we’d love to hear about how you love them.

On our series website we list a few things that we think could be read avidly — leotards, middle school, pastels, tea parties — but we should say that the pitches that have most excited us so far (including these first three pitches!) are not things we thought of ourselves. Part of the pleasure for us is learning about the intersections of other people’s enthusiasms and experiences and expertise. Hit us up!

Image courtesy of the NYPL 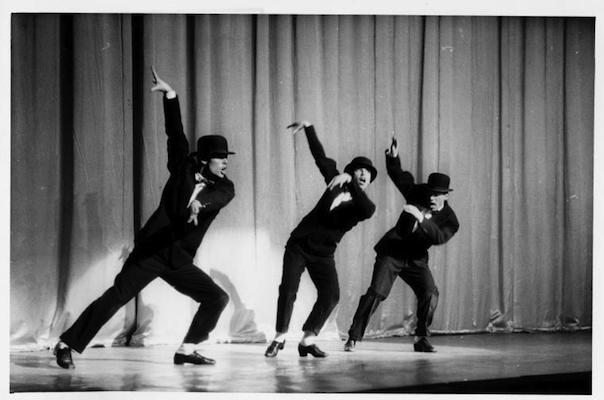