I first met Dareen Tatour last year, just before she began serving a five-month prison sentence for incitement to violence after publishing a poem in Arabic on social media. The accusations against her were based on a policeman’s clumsy translations of her work into Hebrew. As a literary translator, I was curious because behind all words in the source language lie meanings, some hidden, and it is up to the literary translator to discover them.

But when I called her, I could barely hear her words. She talks softly, almost in a whisper, and during that first phone call I decided that if I wanted to interview her I was going to have to take the two-hour drive to her house in the town of Reineh in northern Israel.

Since then, Tatour and I have met several times. Since her release from prison, international interest in her has burgeoned and she has made several trips abroad. Last week, we arranged to meet one Saturday morning by the sea in Jaffa. I pulled into the parking lot and dialed Dareen’s number. She answered brightly that she could see my car, and I looked up at the grassy hill and there she was at the top, a slight figure in a green hijab, gesturing with her hands like a shipwrecked person on an island. In many ways, Tatour is herself an island — she feels like a stranger at home; her friends back in Reineh want nothing to do with her; in Tel Aviv she is a traitor. But it’s a wonderfully sunny day, so I start our conversation with something positive.

What’s the best thing that happened to you since being released from prison?

Reading poems in public. People know me more and I get to read poems in places I never expected — like abroad in Holland, Germany, Sweden, and next week I’m going to a conference for women in Nepal. And even here in Israel, in Tel Aviv! Tonight I’m reading poems to an Israeli audience. Who would have thought such a thing could happen?

And what’s the worst thing?

I hear so often that I’m a terrorist. But to hear it to my face is much worse. Yesterday I was walking in Jaffa. I came to sit right here — I love it here because I can see the sea, the people walking past. One of the passersby recognized me and stopped. “Are you Dareen Tatour?” he asked. “Yes,” I said. So you’re the poet? “Yes,” I said, “I’m a poet.” “So you wrote that extreme poem, right?” And then he cursed me, said I was a terrorist, I should die, then walked off.

And you smile as you tell me this…

Because everything is ludicrous, ridiculous. I became a terrorist because I wrote a poem. Who’s this guy who calls me a terrorist? Maybe he killed someone while he was in the Israeli army? Who knows. I laugh because it’s painful. That’s why I laugh. Otherwise, who knows? I might really kill him.

I’ll tell you something else that happened to me in Tel Aviv. I was on my way to a meeting. A little boy ran across my path and was about to run straight into the road. I didn’t think twice, I grabbed him in my arms as he got to the curb, and took him back to his father. His dad looked at me and said, “I know you.” I said “Okay, maybe.” He said, “You’re Dareen Tatour. You’re a terrorist, right?” I stared at him. “I just saved your son’s life,” I said. He was embarrassed, offered me money, but I refused. “Just remember the terrorist who saved your son’s life,” I said, and walked off.

You see, people are afraid of me, and that still comes as a shock to me every time it happens. I never experienced this prior to my arrest. No one was ever afraid of me. Now, everywhere I go, I am suspect. I’m frisked at the airport, shopping malls — everywhere I go. Everyone comes and goes, I get stopped. I was stopped going into a shopping mall, asked to show my ID card, frisked. “Why are you here?” the guard asked me. “I’m shopping,” I say, “like everyone else.”

Where do you see yourself in five years’ time?

Right here, in this very spot.

I’m thinking it would be easier for you to get out of Israel.

No, my life is here. It’s my home here. I am connected to this place, even if there is pain, even if   there are problems, but still it gives me power, it even gives me inspiration to write. I’ll never live abroad; I don’t think I’ll be able to write like I write here.

Where exactly is your home today?

I wander between my family home in Reineh, and a friend’s home here in Jaffa. I don’t feel at home in Reineh. After all those months of house arrest, I feel imprisoned there. During that time, I felt as if I was about to explode inside. The only thing I could do was to go into my room, put headphones on, and listen to music for hours — Mozart, Haydn, Beethoven. Before my arrest, I liked listening to songs with lyrics. Now I look for music without words because it helps me to think more clearly and also relaxes me when I’m writing.

Your writing expresses a double narrative — oppression of the Palestinian people but also oppression of women under the patriarchal society you grew up in.

I was punished by the Israeli authorities for being a strong woman; I was also punished by my own society, because I spoke out against the years of rape I endured as a child.  Even my friends have deserted me because they’re afraid for themselves.

You’re headed for Katmandu, Nepal, for the CREA conference on violence against marginalized women.

My advice to other women is: speak. The only thing that will heal you is to talk. Medicine will not heal you. I’ve been through all that. Just speak openly, don’t hide it and don’t feel ashamed. The one who should feel shame is the person who did it to you.

For years you kept silent and didn’t speak out.

That’s true. But remember I was seven years old when the rapes began. I was just a kid, what could I do? It went on for five years — in his house, my house, whenever he could get me alone. I was afraid to go into the toilets at school and so would pee in my pants — my mother punished me for this and made me feel shame. The teachers at school, who knew how introverted I had become, did nothing either. In third grade, the art teacher told us all to paint a picture of spring. I did what I’d always done. I painted a square with a little girl inside, and my name. The teacher yelled at me and then hit me. So I stopped painting and didn’t go back to it until quite recently.

My mother hit me hard for my behavior. She is also a victim of our society – she didn’t even want me when I was born because I was a girl.

I began to be afraid of everyone. And then afterwards they asked, “Why didn’t you tell us?” I never heard anyone asking why I’d been raped.

I didn’t change, I’m the same Dareen. My political opinions are maybe more extreme but not my roots, and not my feelings.

I want to make a difference for other women. When I wrote “Resist” [the poem that Israel claimed was incitement against the Jewish state] there was a strong subtext because I was also referring to a woman who’s been raped, who’s had something taken from her by force.

You told me that you’ve lost many friends. But you’ve become friends with Einat Weizman, the Israeli actress, director, and activist. She created a documentary theater show, “I: Dareen Tatour,” based on your life and writing. There’s a lot of trust between you, although you’re Palestinian and she’s Jewish.

When I went to Oslo with the show, people asked me: “After everything you’ve been through, how can you work with a Jew, an Israeli? Don’t you feel hatred for Einat?” What people need to understand is that there’s a difference between Jews and Zionists. I have no problem with Jews at all, we can live here together in this homeland.

Einat is my friend. We created the show together, we’ve become close friends. I write every day in my diary and I also write every day to Einat. I even wrote to her in prison.

You wrote a lot in prison.

It was tough, some of the time I didn’t have either pen or paper, let alone my laptop. So I wrote on the wall with the zipper of my coat during investigations. I was determined to write. There is also a memoir I wrote about my life, the multiple rapes I suffered while growing up. I wasn’t allowed a laptop, later I was allowed notebooks and I wrote a lot there.

Now that you’re out of prison, do you have a particular writing practice?

I write whenever I can, on the bus, at home, in the middle of the street if something comes to me. I write whenever I feel it. I take out my notebook and a pen and I simply write. I’ve always done this, for as long as I can remember.

You come to the sea a lot.

The sea is the only place I can really trust. All the good is here. I can talk to the sea, I’m my own person. I can shout out loud, I can sit here, where we are now, and I feel at home. The sea is Dareen. After the poems, it’s the sea.

I’ve always loved the sea. My parents took us every week to the sea. This is the only happy thing I remember from my childhood.

What do you wish for yourself?

To feel free for one minute in my homeland. To feel like a free Palestinian, a free woman. 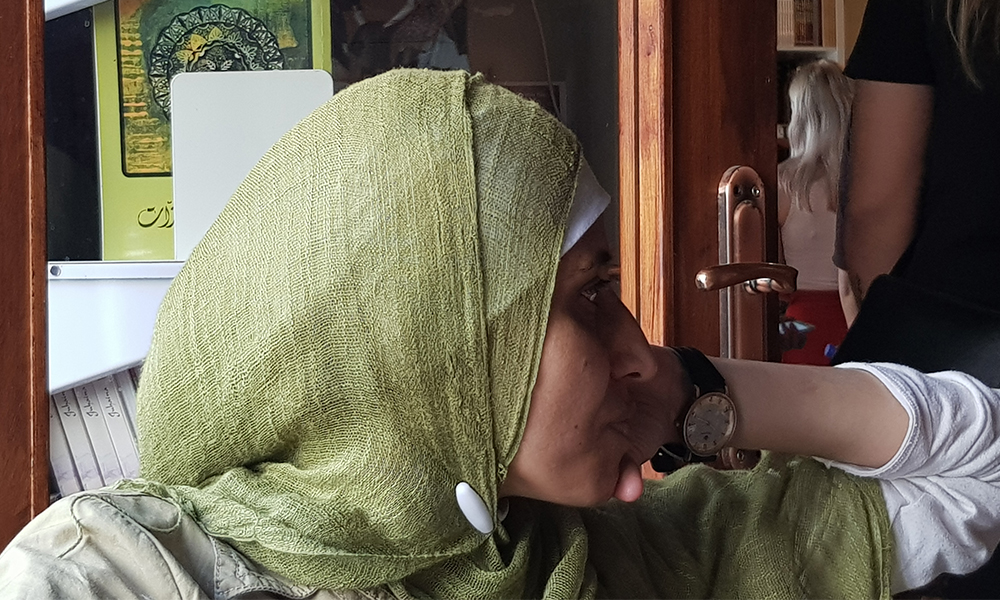