It can be hard for people who know that Bob Dylan comes from northern Minnesota to think of the region without thinking of him, too. In Leif Enger’s Virgil Wander, set on the shore of Lake Superior north of Duluth, Dylan appears as a cameo character passing through the downtrodden fictional town of Greenstone. But there’s also a thematic echo of Dylan in this book, Enger’s first in a decade, and it’s embodied in a line from “It’s Alright, Ma (I’m Only Bleeding)”: “He who is not busy being born is busy dying.”

There’s a whole lot of being born in Virgil Wander, starting with its titular narrator. A staid and modest Midwestern theater operator and civil servant, he inadvertently hits the reset button on his life by driving off a road into Lake Superior. His re-entry into Greenstone’s daily round is complicated by the arrival of a grizzled Norwegian named Rune who comes to town in search of a son whose existence he only recently discovered  — and who has in fact disappeared, leaving behind a wife and son. The Virgil/Rune encounter sets off a chain of rebirths, since the people of Greenstone, as down in the mouth and lost as some of them may be, have no interest in busying themselves with dying. Even the town itself, a former mining hub, tries to reboot. But success is not guaranteed, and for some being reborn turns out to be no more than a roll of the dice.

Readers of Enger’s earlier novels — Peace Like a River (2001) and So Brave, Young, and Handsome (2008) — will recognize Enger’s spacious landscapes from his earlier books, as well as his deft hand at rendering the tight fabric of small groups of people via moments of self-revelatory connectedness. But Virgil Wander has its own identity. It is more intensely lyrical than its predecessors, in large part because the narrator sees his defamiliarized natural surroundings in new ways. That lyricism burns brightest in moments when Virgil is closest to feeling undone and helpless, which also happen to be the moments he comes closest to understanding the whole of life. Leif Enger and I talked via email as he toured cross-country with the new book.

STEVEN WINGATE: During your first reading from the novel at the South Dakota Festival of Books, you started off by telling us that we were the first people to “meet” Virgil after you’d known him for a long time. Did you feel this way about all your novels, or is that feeling particular to Virgil Wander because his name is your title?

LEIF ENGER: I’ve felt close to all my narrators but none more so than Virgil. He’s nearly my age, living in a place not far from me, doing a job I always viewed romantically but was lucky enough not to try.

Virgil talks of his pre-accident self as a “previous tenant,” as if its another person hanging around in his present life. I can’t help but see a parallel here with the fact that you wrote an entire previous version of Virgil Wander and scrapped it as unsatisfactory. Is the ghost of the previous version hanging around like a “previous tenant” in the finished work, or were you able to make a cleaner break from the past than Virgil did?

That’s a funny observation and I would definitely go back and compare old versus new if I hadn’t deleted the original entirely. One thing that happened repeatedly was that crucial scenes in the first version looked utterly different the second time round, which led to different outcomes, partly because there were new characters involved, and partly because Virgil himself was so altered from that first-draft protagonist — his manners, his means of self-defense in social situations, his whole way of responding to people set the narrative on a different course. Sometimes the things he said made me laugh out loud, but on the whole he’s much more who he ought to be in the final version. If there’s an alternate universe, as in Fringe, then somewhere lives an uptight projectionist fretting by himself on the shore of an inland sea. It’s unlikely we’ll ever know.

In conversation with Laurie Hertzel at the Minneapolis Star-Tribune you mentioned that “You have to have the right voice or the book is doomed.” Was there a particular moment when you knew you had Virgil’s voice?

Once it became the tale of a damaged man mending, the voice clarified straightaway. The early chapters came fast and all the gears worked. Of course there were still bumps in the narrative but I could see how to work them out. There’s something appealing about the first-person underdog discovering, or re-discovering, his world, learning who his friends are, getting the occasional adjective back, questioning old assumptions or in some cases just forgetting them; it also provided an arc that’s by nature questing and hopeful, which made it more fun to get up and work on every day.

Virgil gets a chance to start over after his accident, which a lot of people wish for. It’s also a dream situation for a fiction writer — the chance to build a new character on the hulk of an old one. Were there places the “new Virgil” led you to to that you didn’t expect, or places you thought he’d take you but refused to?

Both those things happened. Maybe the nicest surprise was realizing that Virgil’s not the only one getting an Act Two. Nearly all the main characters and most of the minor ones are looking for exactly that — a fresh start, a clean shot, a new socket set to fix whatever isn’t working. And somehow Virgil seizing the day — which he does reluctantly, because of being tired and sore and unbalanced and forgetful — is a catalyst for change in the lives around him. That’s something I didn’t expect, or even notice was happening until fairly late in the game.

I know I won’t be alone among your readers in finding Rune, the Norwegian kite-maker, to be my favorite character. You’re a kite man yourself, and you’ve written recently in Literary Hub about your love of flying and building them.  How do you imbue characters with something you personally love in a way that lets them love it in their own way and not yours?

The best way to know someone is to understand what they love, or have loved, or might love eventually. Music, gardening, Dr. Who, skull rings, knitting, aromatherapy, Airstream trailers, giant sturgeon — at the coffee shop where I’m sitting there’s a man wearing the most conservative suit imaginable who’s braided his beard into a hatch of pale snakelets. So much work! Most of my characters show up with some obsession already in hand, usually one I admire but haven’t had the excuse to explore.

Everything in the world is worth a closer look. To your question, my habit when working with a new character is to write tons of backstory. Where did they grow up, in what ways did they disappoint their parents, what’s the gap between what they wanted and what they’ve so far accomplished, do they like poetry and if so is it the rhyming kind? Almost none of it will make the final draft, but it opens a window into their lives, suggests the origins of their language and habits, and gives me the sense they have things going on outside the book’s horizon. Do they then love things in a different way than I would? No idea. It’s probably inevitable that they all carry my fingerprints, but there’s nothing I can do about that.

Your novel takes place in a small, tight knit, semi-rural community. Yet Virgil talks in an early chapter about being completely unable to ask for help even though he’s a fixture in his town. This goes against our stereotypical vision of “heartland” America as being a place where we’re always connected, where we’re just one more plant growing out of the soil. How do you as an author attune yourself to capture that sense of isolation in different settings?

Isolation is as much the rural Midwestern experience as community — more so, I’d guess. Connectedness is admired, but self-reliance is venerated. A few years ago I was walking and it began to rain, so I stopped at the house of a neighbor at the dead end of the road. Carl was eighty, lifelong bachelor, drove into town a few nights a week to eat at the Legion or the bowling alley. He kindly asked me in, invited me to watch the rest of the Twins game with him and led the way to his little television through a maze of ice cream buckets and dutch ovens and Dinty Moore cans he’d set out to catch the water coming through the roof. When it started raining harder the dripping got so loud he had to turn up the TV. I asked if he’d like some help with his roof and he said, “What for, I got plenty of cans.” He had that arid humor, and he also preferred coping with stuff on his own. Isolation is the default setting — it’s community that has to be constructed intentionally, no easy task. Nothing is more terrifying than a church potluck, no matter how much you might like everyone there.

Minnesota is a literary hotbed, with many fine writers and equally fine publishers (Graywolf, Milkweed, Coffee House, etc.) and it’s the nexus for a very large region that stretches across some large states. Historically we’ve talked in America about Southern literature. Do you think the upper Midwest/north central region has a literary identity, and if so what do you think characterizes it?

People love this question of literary ID and I never know how to answer it. Virgil Wander is written in the tradition of the provincial Midwesterner at once comfortable in his pastoral world and dying to bust out, but we don’t own that idea, and anyway it’s a small slice of what actually emerges from this fertile part of the map. I like what Jim Harrison had to say on the topic, essentially that there’s no such thing as regional literature — a piece of writing is literature or not depending on its merits and not on its geography. Would I still want to read Flannery O’Connor if she’d set her stories in Osakis, Minnesota? You bet I would — in fact, I wish she had.

Now that you’ve moved from central Minnesota to Duluth and have started writing about the life around Lake Superior, do you think your fiction will stay there too? What do you have cooking now?

I’m too superstitious to say anything about the next project, but Lake Superior is medicine too powerful to ignore if you live anywhere close, which I do. 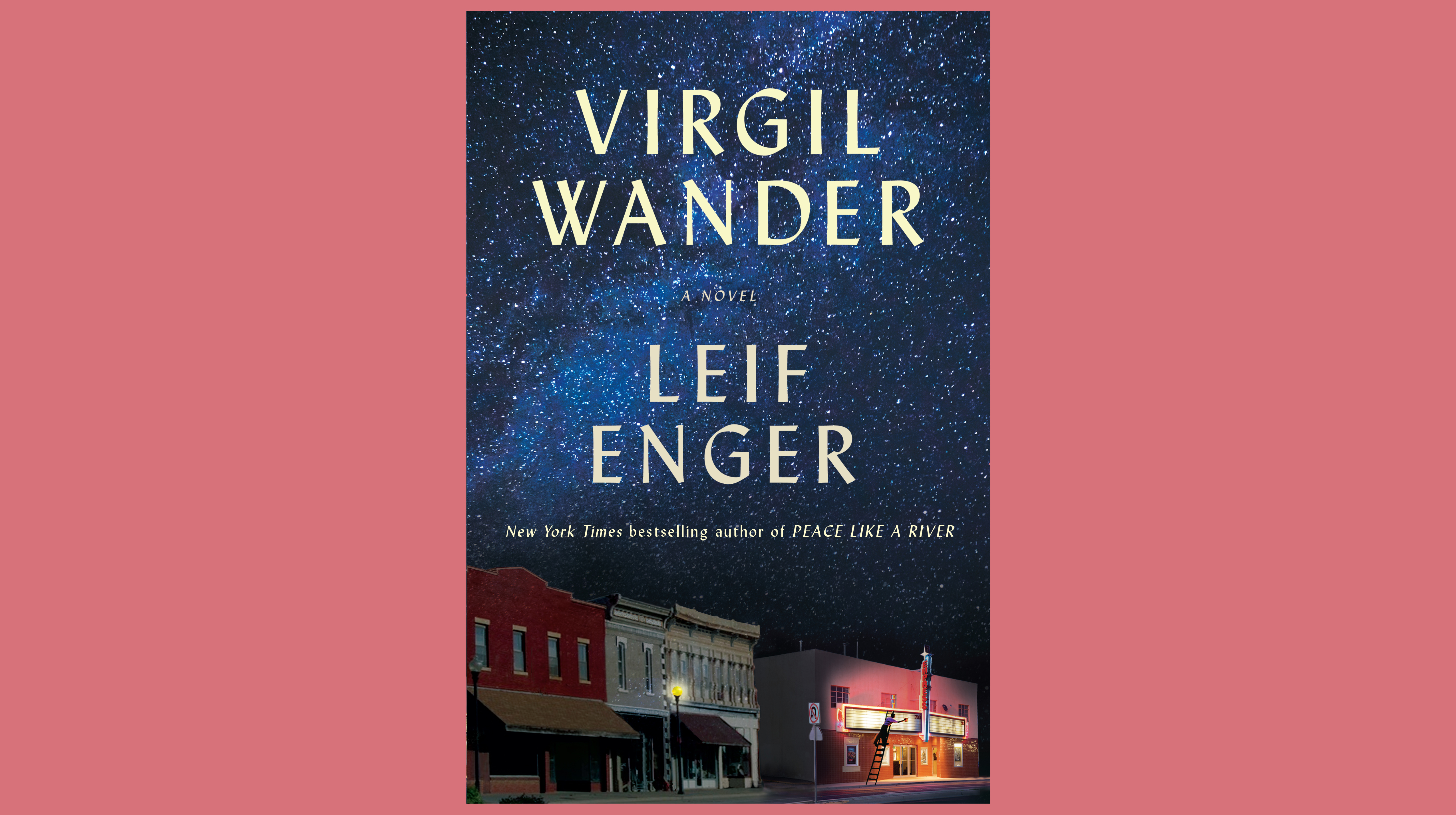