I knew you since high school, hanging in your
Mom’s library at Dorsey

We both kicked it on Hollywood corners
Saw the black dude with curlers and shower cap
Miming to opera records, and them freaks
And those bookstores

Remember a lifetime later you started calling
Me your young friend though I was 2 years older
And we started to roll through your LA and I learned
You ate everything.

We were at another place where Hollywood agents ate.
And the salmon mousse tasted weird
salt that wouldn’t dissolve, you said it was fine
Until you tried it and said, don’t eat it
That’s not salt, it’s glass; the jar had imploded

Damn…so weird and on the way home you made
That right on La Cienega and the police pulled us
Over and you had those expired tags and went all Falstaff
On those rollers and one touched his gun and
Then they towed the truck and we were stuck.
Under a freeway overpass at midnight in a gangster hood
Until Laurie rescued us.

Remember that time I was on the phone with Jinghuan in China
You noticed police behind us
Expired tags no thing at all
Until they ordered me out the truck at gun point handcuffed
Us both on Beverly Blvd, I politely suggested
That your were a famous food writer, you whispered
Don’t bother they won’t listen
Finally they realized that you weren’t an escaped
Felon who shot at cops and they let us go to
That seafood joint

Remember those tasteless fat olives that were really water-bugs
And that cold fresh blood soup?

Remember the Rose Parade at Sumi’s, and that frigid horizontal rain,
Our brood riding in the truck bed to and fro and there we ate cinnamon
Rolls while Elise and Leon broke into a break dance then home for
Black-eyed peas to celebrate the New Year

Remember awards and books
And travels and endless brilliant meals at your
House.

Remember the travails and happiness of
Family and friends.

Remember that you belong to Los Angeles to us All
In your singular herculean generosity
We remember it All and we will remember you.
As we look at Los Angeles and ourselves through Gold eyes.

And I remember the truth: I never ate better than at your house. 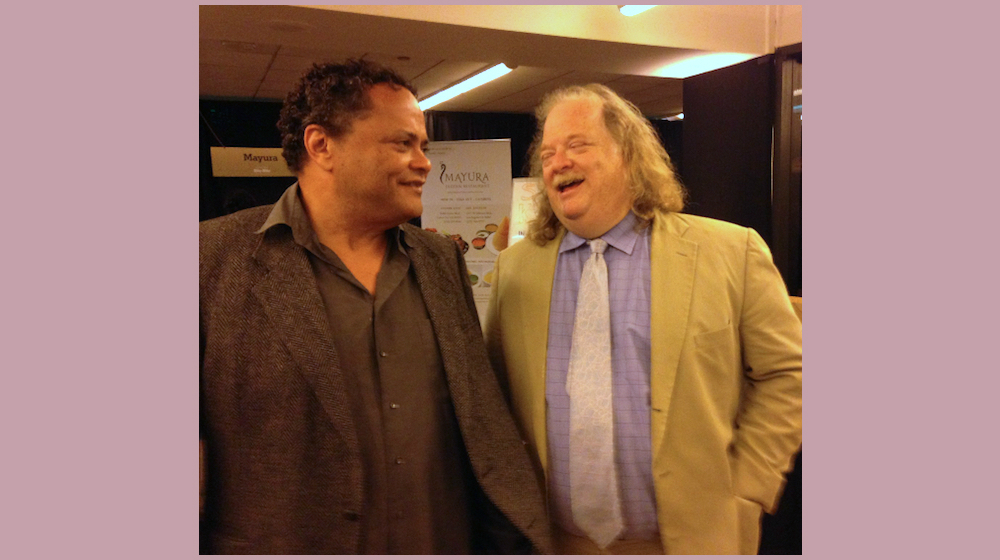