The Dhaka Lit Fest is happening this week in the capital of Bangladesh, a touch over 8000 miles away from Los Angeles. It’s hosting over 200 participants from nearly two dozen countries, and will welcome thousands of visitors over the course of its three days. Launching one of the world’s most exciting literary festivals, in the middle of the world’s densest megacity, is accomplishment enough. But managing it year after year, meeting increased expectations, and handling the particular challenges of a place like Bangladesh, make the Dhaka Lit Fest one of the most remarkable literary events in the world.

I met all three founders on my first visit in 2014, and was struck not only by their commitment to the mission of the festival but by the diversity of their backgrounds. Sadaf Saaz is a poet, writer, entrepreneur and women’s rights activist. She co-founded the festival in 2011 in partnership with the Hay Festival. London-based Ahsan Akbar is a poet who also runs a media and PR agency, Zephyr: Media PR. An author and frequent contributor to the Wall Street Journal and New York Times, K. Anis Ahmed is the founder of the University of Liberal Arts Bangladesh and Denver-based Teatulia, the first certified organic tea brand from Bangladesh to be sold in the US. He is also the publisher of Dhaka Tribune, a national daily newspaper.

On the eve of this year’s festival I corresponded with all three founders, to talk find out what makes the Dhaka Lit Fest different, the challenges of balancing two primary languages at one festival, and how they’ve been able to land such incredible guests, from V.S. Naipaul to Tilda Swinton.

C.P. HEISER: The Dhaka Lit Fest started seven years ago, originally sponsored by the Hay Festival. You quickly outgrew that umbrella. What made you want to strike out with your own brand, so to speak?

ANIS AHMED: I’d say what made the three of us want to re-brand the festival as Dhaka Lit Fest was basically the simple desire to give it a name that would more directly convey its mission — to showcase Bangladeshi writing and writers to the world. We always felt that despite a vibrant literary tradition, Bangladeshi literary culture had become too hidebound. Our writers were not reading outsiders enough, let alone being in touch with them. And the world too had not done enough to ask itself, Oh, let’s go see what’s happening in the world’s seventh most spoken language!

SADAF SAAZ: An interesting aside on our origins as the Hay Festival Dhaka: it’s not quite as if Hay decided to simply come here. Rather, in its first year, Hay was trying out three different locations in the Indian subcontinent — Kerala, Kolkata, and Dhaka. Kerala and Kolkata, both in India, have vastly more English speakers, and arguably more literary audiences. Yet, through the quality of our organization on ground and the level of engagement by our audience, Dhaka was chosen by Hay organizers to continue, and it ran as the Hay Festival Dhaka ran until 2014.

AHSAN AKBAR: It should also be mentioned that in our first year as Dhaka Lit Fest, in 2015, we faced a crises after the so-called “blogger killings.” In all fairness to Hay, it’s doubtful they could have gone ahead with a festival in a place that was so far away for them. That year we faced 19 cancellations in the final 30 days leading up to the festival; still, we forged ahead and it was bigger than any year before.

You’ve been able to bring some incredibly diverse guests from all over the world to Bangladesh. For many, that’s no small trip. (Just from personal experience, it’s roughly 21 hours of flying time from Los Angeles.) So what’s been the magic of your pitch?

AKBAR: I’m based in London and often the first to make contact with many of our authors, and especially the “big name” ones you mention. I think the experience of past participants and their reference goes a long way. So, for example, we got an introduction to [Syrian poet] Adonis thanks to V. S. Naipaul. Since participating last year, the Naipauls have become great champions of the festival. We also make the effort to meet people in person and I think that helps cut past a lot of media bias about Bangladesh and gives them a clear idea of what they can expect at DLF.

SAAZ: The reference of our contacts from around the world have been a big factor. People like William Dalrymple and Namita Gokhale, the organizers of Jaipur Lit Fest, have been very helpful, for example. So, we are thankful to all our friends who help us with introductions and who act as advocates for DLF.

Having attended DLF myself, I can attest to the incredibly special energy of the crowd. Engaged, enthusiastic, and opinionated. With respect to describing the energy of certain lit panel discussions I’ve attended elsewhere, those three words could be employed more appropriately as antonyms. What makes the Dhaka literary crowd so great?

AHMED: We are the only event of its kind in Dhaka, a truly international literary festival. And most of our audience don’t have easy access to the kind of speakers and discussions that DLF offers. So, our audiences appreciate what a rare treat it is, unlike perhaps in places where some people may feel “spoiled by choices,” and that perhaps leads to their unique eagerness and engagement.

AKBAR: DLF is not a “replica” of an event that could happen elsewhere — say, New York or London — and be “air-lifted” to Dhaka. The fact that it takes place in Dhaka, the kind of speakers who choose to go there, and the audience that they meet there, as well as the topics we set and the angles we take on them as the curators of this event, all of it contributes to a kind of discussion that’s not necessarily happening elsewhere. It’s time to lose the anxiety about the “center cannot hold,” and to start recognizing that the “fringe is the new center” — and even learn to celebrate that.

Can you each give me one of your highlights from guests or events of the last seven years?

AKBAR: V. S. Naipaul. Hands down! One and only!

SAAZ: Oh, I could never pick “a highlight” or even a set of them. Everything is so thrilling; to have the likes of Tilda Swinton and Lionel Shriver here in Dhaka this year! But also, how we curate our own culture has always been very important to me, to all three of us. We give our Bangla literature center-stage in a way few other festivals do with their own languages. We also are the only event where every single language that’s native to Bangladesh has been heard at some point — and we have over 30. We also bring out aspects of our folk tradition; the syncretic Sufistic practice among other things, that’s often news even to our Bangladeshi audiences. For example, this year we are showcasing the one authentic local martial art form, stick-fighting, and doing so by bringing a practicing rural women’s group of stick-fighters!

AHMED: Our twin thematic constants have been freedom of speech and women’s issues. So, to hold panels with writers and bloggers who were under threat, to continue to give them space, stand by them and with them, that has meant a lot to us. On the women’s front, I love the unexpected turns we manage to take. So this year we are doing a panel on path-breaking women in Bangladesh, including our first fighter jet pilots and an internationally competitive female weight-lifter. I am really looking forward to hearing their stories.

So there are two literatures featured at DLF: English and Bangla — how would you describe the relationship between the two? And has it changed from the first DLF to today’s?

AHMED: Bangladesh, you know, isn’t nearly as Anglophone as our neighbors India and Sri Lanka. Or even urban Pakistan. What’s more, Bangladesh has a uniquely strong attachment to the local language. Our independence movement really started as a movement for linguistic rights in 1952 culminating in the war and liberation in 1971. So, people here take great pride in their language and are wary of English or any other language usurping Bangla’s primacy in the name of globalism. So, initially some Bangla writers and activists were a bit worried as to whether an “international” festival would become the gateway for what they see as a neocolonial dominance of English.

SAAZ: Luckily, given our mission and ways of handling things, we were able to allay such fears. If anything, most local writers now see the value of this international engagement both in terms of broadening their own intellectual and aesthetic horizons, and helping hold up Bangla literature to the world in ways that have not happened during our first four decades as a free country.

This ties to the Dhaka literary scene. What drives it today?

AKBAR: Anis and Sadaf are the ones on ground, but as someone who’s been an avid reader of Bangla literature all his life and is still closely in touch with Bangla writers, including some who had to go into exile, I’d say Bangladeshi writers have been a very progressive bunch on the whole. They have been strong custodians of our secular principles. And DLF is helping them find friends and validation from across borders to keep that flame of conviction alive.

We’ve all attended more than our fair share of literary festivals. They can be really inspiring events, but, on occasion they also can also present some stifling dynamics. What other global festivals do you like? And what are things you definitely try not to do at DLF?

AKBAR: I really like small new events with a focus and energy like, say, the Wilderness Festival.

SAAZ: I love Jaipur! They’re so big and yet so vibrant and offer such thrilling encounters.

AHMED: This year I went to the small Mountain Echos festival in neighboring Bhutan, and I felt it was exquisite. I think the one thing we are very intent on is to keep the festival completely free and open to all. We think it better to raise funds from sponsors but keep it free for those who wish to attend and not let affordability become a barrier for anyone.

And finally, what IS Tilda Swinton doing at this year’s DLF? And what does it mean to have these kinds of guests at DLF?

AKBAR: So much! She will present her documentary on John Berger. As you might know, Berger was a dear friend to Tilda and like a mentor. Berger passed away last year, so when Tilda agreed to come, having her pay tribute to him seemed like an obvious choice. I’ll also engage her in a one-on-one session about her own varied career as an artist, titled Performance As Authorship.

SAAZ: We are also going to have a few surprises around Tilda, making her presence at the festival even more special.

AHMED: We welcomed Tilda and her partner Sandro to Dhaka last night and I think they’d say they are already having a blast! And that’s ultimately what DLF is about: for everyone who comes as an artist from far away or just to attend from Dhaka itself; it’s about having a really good time and being transported by thoughts, ideas, debates, and the energy of a country like Bangladesh.

Header image: The Dhaka Lit Fest, under a canopy of trees, on the historic grounds of the Bangla Academy. 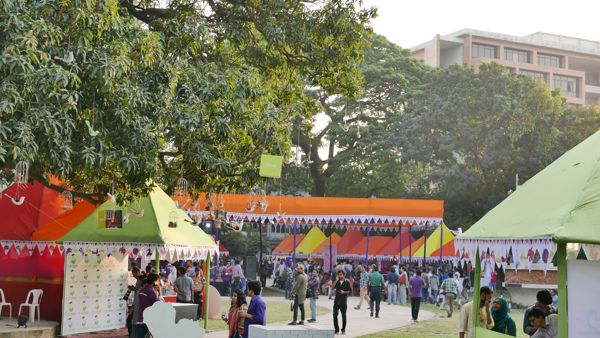