“You should be scared. You laugh not to cry, but don’t laugh too much, you should be scared,” said author and journalist Ta-Nehisi Coates to 1,270 people on November 6 during a sold-out event for his latest collection We Were Eight Years in Power: An American Tragedy, at the Wilshire Ebell Theatre. Coates was in conversation with Elizabeth Hinton, author of From the War on Poverty to the War on Crime: The Making of Mass Incarceration in America. She came with no softball questions, and Coates held no punches.

The “what” we should be scared of, Coates says, is ultimately “a country that has been repeating lies to itself since the Civil War ended.” But fast forward 152 years, to the first two lines of Coates latest book: “This story began, as all writing must, in failure. It was February 2007.” We Were Eight Years in Power is based on the eight columns he wrote for the Atlantic, beginning with “My President Was Black.” Each represents a year of Barack Obama’s presidency.

But We Were Eight Years in Power isn’t just a reproduction of his digital columns, it’s an “intellectual biography, through the eight years of Obama,” as Hinton puts it. It’s also a reflection of race and the injustices of the American past and ingrained racism of the American present. In other words, it’s a response to the presidential election of 2016.

Andrea Grossman, the founder of Writers Bloc, which co-sponsored the event on November 6 with Eso Won Books, said during her opening keynote, Coates never gave Obama a “free ride” and “engaged him rigorously.” Like Between the World and Me, Coates’s latest is “intensely personal as he invites us into his reasoning, into his feelings and oppressions as he prepared for and conducted his many meetings with the president.”

Coates explores the tensions between “his [own] self-doubt and the praise he’s earned from the black and white liberal establishment, forcing him to rewrite his own identity as a college dropout to an uncomfortable and reluctant thought leader on race in our country.” He’s been called “this generation’s James Baldwin,” by the National Post, among countless other titles of praise.

Elizabeth Hinton told Coates: “your essays really foreshadow how we move from Obama — this moment of hope, change and promise, thinking that one minute we could transcend American racism — to Trump.” She describes the present as a “mood of hate, fear, white nationalism, and white supremacy.” In response, Coates believes that “white supremacy is so foundational to this country that it cannot be defeated in [his] lifetime, [his] child’s lifetime, or perhaps, ever.”

According to TIME, for his book’s endpapers Coates went with a toile design, “the whitest of white-bread color, a textile steeped in colonialism and cotton.” He chose illustrator Dan Funderbugh’s “subversion of the traditional form to complement other historical allusions.”

Essence reported that it was no coincidence that Coates was heading to two Black-owned bookstores, Sankofa Video and Books in Washington D.C. and Eso Won Books in Los Angeles, to launch his third book. His decision “to go to independent Black bookstores is indicative of a larger movement of Black creatives making an effort to stay connected to Black-owned businesses and creative spaces that can keep them in touch with their core audience.” Sankofa hosted the D.C. book launch at the Metropolitan AME Church in October, and Eso Won hosted it at the Wilshire Ebell Theatre.

Throughout the evening we learned about Coates as man, as a son, as a writer, as an atheist and as someone who does not seek approval. “I take my humanity, my equality, as a given. I’m not arguing about that. I don’t have to prove anything … I don’t need approval,” Coates said. “I just don’t need it, so I think that allows me to write with a kind of confidence.”

Coates also talked about growing up outside of the literary canon. His family’s impressive home library was full of books celebrating black history and the black freedom struggle. “There were tons of books everywhere,” he said. “We didn’t have a ton of money but there were books.” He recalls The Black Book by Toni Morrison specifically.

National correspondent for the Atlantic and a recipient of a MacArthur Fellowship, Coates is also author to The Beautiful Struggle: A Father, Two Sons, and an Unlikely Road to Manhood, Between the World and Me, and the latest Black Panther comic books from Marvel.

The only time Coates faltered was when he was asked possibly the hardest question of the night. “Hip-hop runs throughout the text, runs throughout your pieces [and you] write that you wanted to make writing that flowed like Nas, Raekwon, or Jay,” Hinton said. “What are your top five hip-hop artists of all time?”

“I refuse to answer that question,” Coates responded jokingly. “It’s a trap.”

Instead he named hip-hop artists who have had a great influence over him, adding Rakim and The Roots’s artist Black Thought — who he said he’d listen to while writing The Beautiful Struggle. “If I could just write like [Black Thought], and I don’t mean literally rap on the page, but convey energy or emotion in that way.” Hinton and Coates both agreed that part of the reason that makes [their] music so powerful is that “it’s rooted in our struggle and our history.”

The new book’s epigraph summarizes that — it reads a line from Jay-Z’s “Dead Presidents II” that speaks volumes: “We don’t just shine, we illuminate the whole show.” 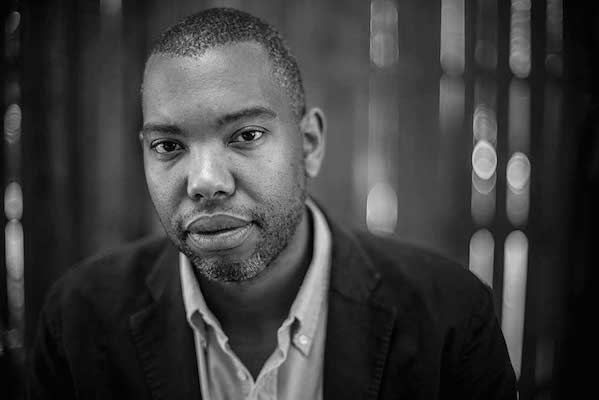