“I’ve been trying to write about my family. Our family. Like it’s a mystery, which it is to me. Trying to answer the question of, you know — What happened? ”
– Dan, in The House in Scarsdale: A Memoir for the Stage

I’m trying to answer a question, too — the question of, you know, why do I love this play as much as I do? What makes this play — now running (in its world premiere) at the Boston Court Performing Arts Center in Pasadena — so moving? So exciting, so engaging, so affirming, so, so, so — so good —

and, I mean, it’s no mystery, not really: I love it for the usual reasons a person loves a play, beginning with the dialogue, startling and funny and wise (and lyrical); and the masterly acting (a couple of white guys in all the parts and let’s give them a break, can we, please? They can’t help being a couple of white guys — another rant for another day); and the design and the staging (h/t director Michael Michetti), elegant and spare and understated — and therefore mysterious, and therefore evocative —

and then there’s the story itself — the script — hilarious and sad and surprising and inevitable, and oh-so-particular: Dan O’Brien — poet and protagonist — needs to know: Why did his parents stop talking to him? Why did everyone else stop talking to them? Unable to remember and with nobody to ask (because nobody’s talking to anybody, ha) how’s a guy supposed to grow up and get on with his life, right?

And you know how the specific triggers the universal — how, if an account is singular, you wind up shaking your head, confounded by the big questions, like: who am I? Why am I here? To whom do I belong? Whom should I love? Who and what is bigger than I? What will survive me after I’m gone? How to accept that this, just this in the here and now, is worth my while?

So. And. If that were all, well okay, there you go — The House in Scarsdale is an excellent play. Not easy to come by, not in this town, and this production proves a point, actually: in the theater, anyway — as is also true with poetry and prose (not so much in movies and television) — you can actually do a lot with a little. You must only stay true to your vision (in this case, two actors, two chairs, two screens); you must only establish the rules of the game (no sets otherwise, or costumes, or props); then, most important of all you’ve got to have faith, not just in the play itself but in the audience’s imagination and willingness to play along. And so they do — we do — to our enormous satisfaction and delight.

And. But. Two weeks later, I’m still wondering why this excellent play feels different somehow; still wanting to tell anyone who will listen: Hey, you have to see this play! Because … Because … Because it’s not just a play, it’s more than that: it’s A Memoir for the Stage! And that’s the revelation, for me anyway, though who knows why; why am I amazed? What am I, after all, as far back as I can remember, if not a student of both memoir and theater? Did I need a subtitle to realize how very well-suited one form is to the other? What’s a memoirist doing if not reliving her life, the most important scenes (the ones that stick, and they stick for a reason), in any order she pleases, but in order to discover what it all might mean? And that impulse — to remember; to insist on a record; to play all the parts; to interrogate oneself; to juggles ones’ selves; to hunt down one narrative only to be blindsided by another — is at least as theatrical as it is literary. I should have known. I did know, of course I did. How many times have I seen The Glass Menagerie, in which Tom says in his opening monologue: “I am the narrator of the play, and also a character in it.” And twice I cried all the way through Fun Home (the sublime adaptation of Alison Bechdel’s graphic memoir), in which there are three Alisons on stage, one of whom, the narrator, telling (and drawing) her story and watching it unfold at the very same time.

So — so now here comes award-winning playwright Dan O’Brien, who has written movingly about the house in Scarsdale before: but this version — theater as memoir — memoir as framed and lighted and acted without intermission in a little black box, seems especially right. True to the genre — in which the writer is both narrator and protagonist — there are two Dans on stage: the twist is that Brian Henderson does double duty throughout. Tim Cummings, the other Dan (his alter-ego), also takes on all the other roles: a private eye, a psychic or two, assorted passers-by, Dan’s father, and brother, and uncle, and mother, and aunt, and even (in maybe my favorite scene) his wife. Cummings  only drops or lightens his voice, changes his cadence, shifts his posture, and one by one each character comes robustly to life. His is a tour-de-force turn, matched by Henderson’s exquisite sense of truth in a performance full of humor and ache.

Of course, both memoir and theater — memoirists and actors — are as maligned as they are beloved. We are accused, among other things, of navel-gazing and histrionics and making too big a deal of ourselves. But the truth of it is, as poet and memoirist Patricia Hampl once wrote: “the past is radiant. It sheds the light of lived life.” And Oscar Wilde is credited with saying that “the theatre as the greatest of all art forms, the most immediate way in which a human being can share with another the sense of what it is to be a human being.” However, I’m not excusing or apologizing or justifying, not I. I’m celebrating. I’m saying I told you so. I’m saying if you don’t love one form or the other — theater or memoir — The House in Scarsdale: A Memoir for the Stage will most certainly make you love both. The good news is that it’s running at the Boston Court through the 4th of June.

Hey, hey — you have to see this play. 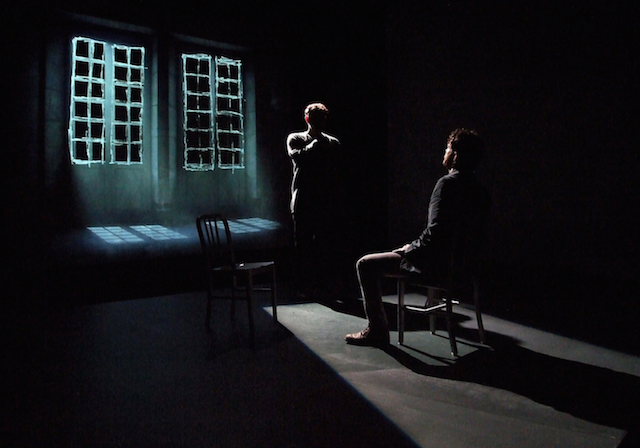