Portuguese artist and activist Ricardo Gouveia, or simply known as “Rigo 23,” has made it his mission to be an advocate for social and political change through his large-scale murals. More specifically, Rigo 23 calls attention to the unjust incarceration of political prisoners and the plight of indigenous communities in the United States.

In May of this year, Rigo’s nine-foot tall statue of Native American activist Leonard Peltier along with other large-scale murals were exhibited at the Main Museum in DTLA.

Rigo’s work has been exhibited internationally for more than two decades in public spaces and has continually encouraged viewers to examine their relationship to their community and their complicit role as “unknowing advocates of public policy.”

Sitting at the center of the first floor, Peltier’s calm gaze greeted museum goers as soon as they walked through the door. To Peltier’s left was also an acrylic on canvas banner that covered most of the museum wall, reading: “It’s 2018 — Why is Leonard Peltier Still in Prison?”

Made in 1999, the banner is updated whenever it’s exhibited, emphasizing the years that Peltier has been incarcerated.

“After securing Leonard Peltier’s approval of [making this sculpture], it seemed appropriate to borrow its scale not from an actual person,” Rigo said, “but rather from the dimensions (six feet by nine feet) of a U.S. penitentiary cell.”

Peltier, 73-years-old and a Native American activist and citizen of the Anishinabe and Dakota/Lakota Nations, has been confined in federal prison since 1976 — he was convicted and sentenced to two terms of life imprisonment for first-degree murder in the shooting of two FBI agents at the Pine Ridge Reservation in South Dakota, a conviction that Amnesty International and other organizations have disputed. He’s currently serving his sentence at the Central Florida penitentiary.

Rigo says he first became involved with Leonard Peltier’s case in 1997 after meeting military veteran and member of the Black Panther Party, Geronimo Ji Jaga. Rigo had set up an exhibition in Ji Jaga’s honor at the Watts Labor Community Action Committee in Los Angeles, entitled: Guilty Until Proven Innocent: In Justice to Geronimo and the Thousands.

During that exchange, Rigo remembers that Geronimo appointed him to the job of “spreading information about political prisons in the U.S.” Since then, Rigo has used his art to advocate for not only Peltier’s case but also for the Angola Three — a trio of prison reform activists that were exonerated after enduring decades of solitary confinement at Louisiana State penitentiary.

Rigo’s exhibition with Peltier’s statue at the Main Museum was the first exhibition since that statue’s disputed removal from American University in early 2017. At the Main Museum, Rigo also showcased dozens of photographs of people from all over the country photographed with the statue’s feet.

“It’s not so much that people stand in Leonard’s shoes, as much as they acknowledge the scale of his and his people’s struggle, and that they stand there — being who they are in solidarity with who he is,” Rigo said about the photographs. “From the photographs, you can glean how varied and rich the symbolism everyone brings with them […] It is truly remarkable how many different meanings the feet have already gained. They have generated their own journey.”

During these political times, Rigo offers advice for folks who might feel discouraged when it comes to issues of social justice and being a voice for the voiceless. He wants us to remember “that there is never a better time to try and affect social change than the time fate has us living in.” In today’s America, he says, “true and lies; solidarity and racism; macho opaqueness and wisdom; knowledge and ignorance are being juggled and gutted in an attempt to prevent us from being able to tell the difference. An attempt to hypnotize us into stillness.”

Riga’s statue of Peltier challenges this stillness as it makes its way to Seattle, Washington to be on display at the Daybreak Star Indian Cultural Center. “On the way there,” Rigo said. “The statue’s feet will surely visit many more, and cover yet more ground.”

As for Peltier — a man confined to a prison cell — he has a parole hearing scheduled for 2024. In the meantime, Rigo will continue to advocate and fight for his freedom. 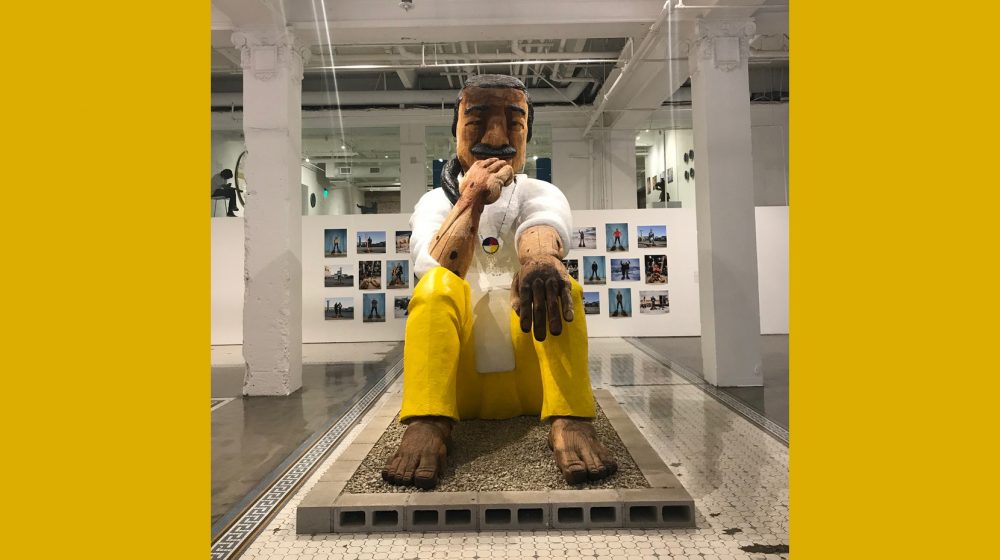