Amid the swell of white noise from the chattering, packed, standing-room only crowd of diverse hipsters at Skylight Books awaiting Phoebe Robinson, a conversation between two women sitting in the row behind me stands out — though it took no effort to eavesdrop. “Phoebe’s saving my life right now,” one stridently said. “Yeah, she tells it like it is,” the other replied, “like how you’d talk to your best friend.”

Moments later, the writer/actress/comedian arrived. The laughter and applause of kindred spirits aligned as Robinson modeled her t-shirt: a drawing of an exasperated Hillary Clinton with Bitch, please! scrawled underneath. It was a fashionably apropos exclamation to the day’s breaking news about the Republican presidential nominee bragging about sexually assaulting women on an open television mic.

“Donald Trump, what a piece of shit,” she said. “He could just die and it’d be totally fine.”

Her debut collection of essays, You Can’t Touch My Hair: And Other Things I Still Have to Explain, published October 4 by Penguin Random House, is her impressionistic, deeply personal stream-of-consciousness flow through her everyday experiences as a black woman in America, which has become the fodder for her comedic work. “I wanted to capture my voice but have it be slightly elevated — because it’s writing,” said Robinson, “like you’re hanging out with a girlfriend, having a glass of rosé and we’re going to talk about race — and it’s gonna be tense for a little bit; that’s why you have the rosé — and it’s totally going to be fine.”

Robinson is the host of two popular podcasts, Sooo Many White Guys and 2 Dope Queens, which she co-hosts with her “work wife,” former The Daily Show correspondent Jessica Williams. Her writing is relatable and woke, confronting racism and how to cope with white guilt, feminism and female issues, and America’s problematic relationship with black hair.

In her opening essay “From Little Rock Nine to Nappy Hair, Don’t Care in Eighteen and a Half-ish Years” Robinson slams head-on into the shock and awe of black women’s hair. The dysfunctional relationship mainstream society has with locks, ‘fros, twists, and braids serves as “a home for people’s preconceived notions about blackness, as if it is an abstract concept that is not connected to living, breathing, and feeling human beings,” Robinson writes.

As she has embraced her own hair journey — from baldness to ‘frohawk, to “fauxlocks and Janet Jackson Velvet Rope” tresses. The essay “A Brief History of Black Hair in Film, TV, Music and Media” recounts the influence of black icons and their influence in popular culture. “A lot of times people don’t think, and pick and choose from other cultures and make them their own,” she said. “But what’s great are all these YouTube tutorials and Instagram accounts. This isn’t like the ‘80s where you can take some shit from black people and it’s cool. We have the receipts now. When Marc Jacobs wants to have a bunch of white models in dreadlocks, we’re like: ‘No, Boo-Boo. We have the receipts. You stole from us.’ We are taking black hair back, and we own black hair in a way that haven’t ever quite done before in America.”

By contrast, “My Nine Favorite Not-So-Guilty Pleasures” offers a lighter tone; she riffs on her pop culture obsessions and confesses the joys of binge-eating McDonald’s.

“It was a nice moment to have fun and be loose, because the other things I write about in the book are about racism and sexism so it was nice to have a chapter just devoted to fun and silly and light,” Robinson said. “It was the first or second essay that I wrote for the book, and I really had a great time writing it. It really set the tone for me for writing the rest of the book.”

For the Skylight reading, Robinson aptly chose “Dear Future Female President: My List of Demands,” a clever riff pronouncing 10 Must-Do-Tasks should Hillary be elected in November. Among them:

Later, when Robinson and I spoke by phone, she expressed some of her more serious, gnawing concerns. “What’s really pressing with me is the whole issue of equal pay,” she said. “Hillary has talked a lot about equal pay — which I think is great — but there’s still this mentality that somehow women don’t deserve to earn the same amount of money. Serena Williams is the arguably the greatest tennis player of all time and still there’s: ‘Well she’s great, but she doesn’t deserve to earn as much as a guy.’ Why? What is the evidence, other than sexism?”

You Can’t Touch My Hair comes at an essential time in our social consciousness when gender, identity, and issues of otherness are pushing their way into headline news stories. “I feel like every woman who’s a feminist, you have this evolution that happens in your late 20s where you really solidify how you feel about things,” said Robinson. “I started doing stand-up right before I turned 24 — that helped me find my voice. Part of the reason I wanted to write the book is because when it comes to matters of race, it’s usually just white men talking to black men.”

A native of Bedford Heights, OH, Robinson studied screenwriting at Pratt Institute in Brooklyn, with the aim of writing serious dramas for cinema. “I was like, ‘I’m gonna write my American Beauty. I’m going to write about a floating trash bag in the wind and it’s going to be really cool,’” she said. “But I’d been working in film but didn’t actually love it.”

Prompted by a friend who wanted to try a stand-up class at Caroline’s in New York City,  Robinson fell in love with the craft. She began doing stand-up shows, a lot of them for free — “or a couple of beers” — just grinding it out around the East Coast.

By 2012, in an effort to begin writing again, Robinson started her blog Blaria, or “black Daria,” an ode to MTV’s smart and cynical animated misfit. She has been a staff writer for MTV’s Girl Code and a consultant on Season Three of Broad City, and her work has been published in Glamour, New York Times, Bitch, and Vanity Fair. She created and starred in Refinery29’s web series Woke Bae. This summer, she appeared in the Amazon pilot for Jill Soloway’s I Love Dick.

She was approached by a literary agent two years about writing a book. “It was such a wild email, because I’m so into Oprah, so I was like: I manifested this,” she recalled. “I really felt that way, because I was writing every day and I wanted to write a book. So I really thought about what I’d want to put in a book — obviously I love pop culture, but I wanted it to have some substance to it.”

In “The Angry Black Woman Myth,” arguably the most substantive of the 11-essay collection, Robinson examines this erroneous trope which has haunted black women throughout the ages, reinforced in popular radio shows of the 1930s like Amos ‘n’ Andy and perpetuated still by black comedians in films like Big Momma’s House. It was the last piece she wrote for the book, and, she said, it proved to be the most challenging.

“It was just about how I was going to broach this subject,” she said, noting that the subject could be its own book. “I mean, black women in this country are not viewed favorably — I don’t know about in the rest of the world because I haven’t traveled a whole lot — and so a lot of times people will go: ‘Oh, I like Beyoncé, or I like Oprah, so I like black women.’ And it’s like: ‘No, you like the two extraordinary black women you’ve never actually met.’ I’m sure they’re both amazing wonderful people but there are so many black women who are not Oprah, and do you like them? Do you want to hang around them?”

She continued: “There’s a tendency to not celebrate the average black woman, and to not value her or to not respect her as a multidimensional human being, and then to reduce her to whatever ugly stereotypes people have about us.”

With this book, Robinson hopes to further broaden discussions on race and gender by making the conversation accessible to everyone. “There’s a tendency,” said Robinson, “if you are a woman, a person of color, or a person from the LGTBQIA community. It’s like: ‘Oh, this book is only for that group,’ as if our experiences aren’t relatable. But Jonathan Frazen is relatable for everyone. Everyone has had micro-aggressions. Everyone has silly pop culture things they’re embarrassed to talk about. So this is, for me, for everybody.” 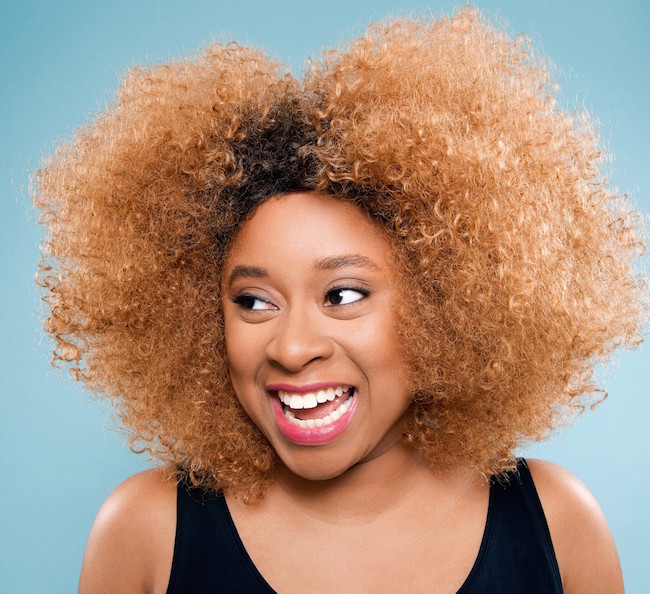