It’s the time of the year when you can hear the wind whistling through Los Angeles — not the sort of Didion-esque unsettling Santa Ana winds, but the Los Angeles equivalent of an enchanting winter wonderland. You can even hear it wailing inside the thick-walled Resnick Pavillion at the LACMA — though perhaps this sense is abetted by the tempestuous, nearly fanatical brushstrokes on Chagall’s costumes for the ballet, leaving you with the impression of the wind arousing the costumes into a performance worthy of their fantastical appearance.

As I wandered through Chagall: Fantasies for the Stage — a journey of Chagall’s contributions to dance and music productions, from costumes to set designs, as well as paintings illustrating musical scenes or musicians — this silent wind that permeated the museum and initiated movement seemed to be aligned with and warmly welcomed into the phantasmagorical narrative central to the work.

Like Picasso and Matisse, who were often commissioned to create costumes and sets for the ballet, particularly for the influential Ballet Russes, many artists are no strangers to interdisciplinary art forms through performance and music. Chagall was a frequent designer and collaborator with the ballet, opera, and theatrical world, given musicians alongside Jewish and Russian folklore music culture often played center stage in his figurative-favoring oeuvre. Chagall: Fantasies for the State focuses on Chagall’s four productions for the stage, between 1942 and 1967: from Aleko to The Firebird and Daphnis and Chloé, finally culminating with The Magic Flute.

The show at LACMA, the first U.S. exhibition of its kind dedicated to the correlation between music and dance to Chagall’s artistic career, was adapted from the Montreal Museum of Fine Arts exhibition Chagall: Colour and Music. Exploring this influence of music and dance on Chagall’s artistic career is a crucial part of the exhibition curated by Stephanie Barron, LACMA’s senior curator of modern art, in collaboration with the Costume and Textiles department, and designed by Opera director Yuval Sharon and projection designer Jason H. Thompson. The unifying factor between the costumes and their preparatory drawings with the selection of characteristic Chagall paintings is glaringly obvious. The star, or rather stars, of the exhibition, however and undoubtedly so, are the costumes themselves.

The exhibition is divided into four sections for the four productions, apart from the room holding Chagall’s paintings; the entry is dedicated to Aleko. In 1942, the early Modernist painter was commissioned by the American Ballet Theatre, formerly known as the Ballet Theatre of New York, to design sets and over 60 costumes for this ballet based on “The Gypsies,” a poem by Alexander Pushkin. Due to union restrictions, Chagall had to create the works in Mexico City, which undoubtedly influenced his designs. Interwoven into the garments, quite literally, with Chagall’s abstract shapes and Modernist ethos, are traces of Mexican traditional textile patterns and styles of dress. From instrument-shaped tunics to a tuxedo jacket paired with trousers covered in ecstatic faces, there is a rich vibrancy owed both to the artist’s surroundings in Mexico as well as the typical treatment of color and life in his works.

Chagall’s designs for both Aleko and Daphnis and Chloé take a traditional approach to the performers’ costumes when compared to the other productions — one can see how the performers would have moved and breathed in the garments, even guided by them. Their various patterns and materials are suspended on a threshold between surrealism and cubism, yet something altogether different and characteristically Chagall. These, however, felt like a minimalist Chagall approach, if ever there were such a thing, when taking into account the intensely imaginative costumes for the other productions, particularly The Firebird.

Approaching the stage housing the extravagantly experimental designs of The Firebird, Norma Desmond immediately came to my mind. Like the silent film star from Sunset Boulevard, Chagall’s mythical costumes for the performers of the Stravinsky ballet — with costumes like the Green Rooster rotating on stage for exhibition goers to get the complete 360° vision — appeared to be awaiting an audience at any given moment and, unlike the fading film star, immune to time’s effects with the bright hues of the yellow monsters, green monsters, and monsters with donkeys’ heads still radiantly intact. Anamorphic, corporeal, unearthly, it was how I imagined Chagall running wild with the wind, paintbrush in one hand and sewing kit in another. Having abandoned art while grieving his wife Bella’s death, Chagall’s creations for The Firebird were pivotal both in signifying his return to art as well as a more experimental approach to his costumes, sets, and stage curtain. Chagall collaborated with his daughter, Ida, resulting in new materials and techniques for his creations consisting of elaborate, collage-style needlework that ultimately resulted in his most avant-garde costumes.

Indulgent in boisterous, bulging silhouettes, Chagall’s costumes for The Firebird — perhaps better described as sculptural forms — kept me wondering. How does one pirouette with a uniform that consists of a towering fish mask and a grotesquely swelling gut? Another myth to add to the ever-growing list of Chagall’s fantasies. These fantasies share a likeness to that of a Pina Bausch piece, albeit exclusive to thematic concerns of absurdity and the body, or costume, as an agent of exaggeration.

Ultimately, Chagall: Fantasies for the Stage left me with just that — fantasies. Elaborate fantasies of watching Chagall’s reveries in real time and extravagant fantasies of experiencing the mythical, dream-like costumes in action. And that’s all that is ever really need from an exhibition — the motive and conditions provided for passive observers to engage with the artist’s dream world and their own imagination. Chagall: Fantasies for the Stage runs until January 7, 2018 at the Los Angeles County Museum of Art and is now included in general admission. 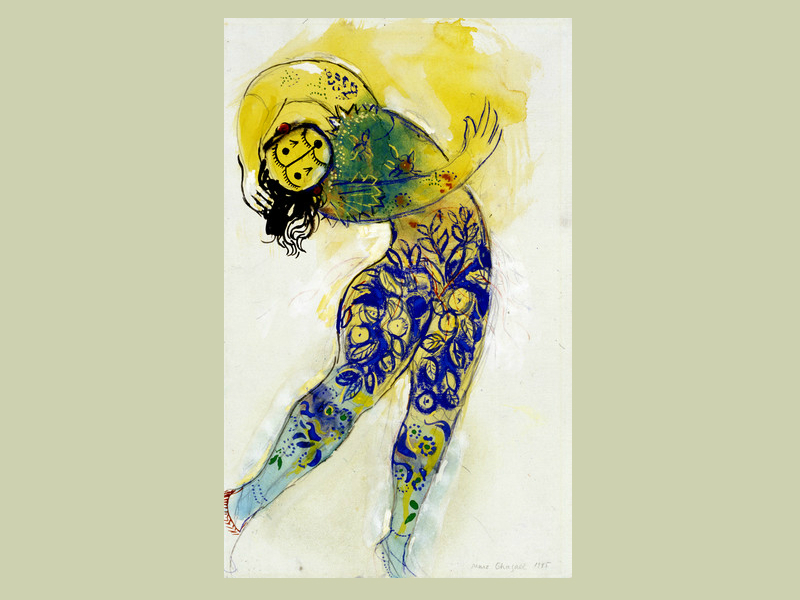