In Detroit, where Madeline Kuzak lives and works, she is best known for her performance art practice, from the music project avri77avigne, and The Jaywalker, a play Kuzak co-wrote and toured with Lisa Crystal Carver of  the band Suckdog. But Kuzak has continuously and quietly been building her visual art practice, resulting in a new solo exhibition titled Limited Too.

Upon entering the second floor walk-up to Los Angeles’s  gallery, visitors are greeted with two fairy sculptures that Kuzak started as “the same sad fairy silhouette.” One is covered with a pale, flesh-colored synthetic velvet, while the other is splattered with white spray foam and black roman numerals to represent a clock. The images call to mind bad early 2000s girly tattoos, like the kind Britney Spears’s got on her lower back when she wanted to shed her good girl image. The tension between the feminine and the painful is one of the main drivers of Kuzak’s work.

“I was influenced by feminine aesthetics and motifs that I grew up with in the early 2000s that I still see today living on” says Kuzak. in lieu, located on the edge of Lincoln Heights and founded by Neidy Lizbet Godinez, Alex Perliter, and Ethan Tate, opened in 2016 and tends to showcase artists whose work is underrepresented in the LA gallery circuit. This typically means that they are working with emerging artists or non-local artists, or in Kuzak’s case, both.

Each of the 10 new pieces in Limited Too are striking in their own right. Kuzak’s artwork stretches from the overtly feminine, like the fairies, to representations of tools or machinery: a paddle hanging from the ceiling and a wheel shaped cut out affixed to the wall. As individual objects, the paddle and the wheel might represent archaic torture tools, but both are also caked in sand — an extreme departure from the velvety and soft materials used in her feminine imagery. It is through this contrast that Kuzak achieves a sort of awkward, yet contained, excitement; not unlike a pre-teen entering a Limited Too store for the first time. A lot of Kuzak’s inspiration comes from sites like Tumblr and DeviantArt, but much of her work feels like it could live alongside classic feminist and surrealist works. The pencil sketch titled Sylvia features an ailing woman in a hospital bed, which immediately brings to mind Frida Kahlo’s painting Henry Ford Hospital. Something about the perspective of the bed, or maybe the fact that Kahlo’s painting is based on an experience she had in a Detroit hospital, keeps these two works cosmically connected. Triumph features a naked woman seated with her legs spread and gashes on her knees. The digital painting was printed onto a piece of fabric, evocative of more contemporary feminist artists like Hannah Wilke. Unlike Wilke, Kuzak never uses her own image. It might seem antithetical for a young, internet-influenced artist to not use the selfie as a basis for her woman-centered artworks, but it actually draws from an internet culture of proliferation. Tumblr’s whole platform thrives on the sharing and re-sharing of images, and although you may be able to track down the original sharer, there’s no system in place to truly identify where that image first came from. To some, this might seem like stealing, but for others it’s a way to find commonality between users.

Upon first glance Limited Too may seem disjointed, but of the four themes the artist lists as guides for her exhibition — fear, pain, memory, and desire — fear is the one that I keep returning to. The 10 works are arranged in a way that the playful images alternate with the darker or more disturbing scenes. Fear, in this case, is represented in images depicting illness, naiveté, and more psychological triggers. Like all successful art, Kuzak’s work feels vaguely familiar, like an early aughts music video, or a classic thriller, her success also lies in her ability to get the viewer to draw these connections on their own.

Limited Too is on view Saturdays or by appointment at in lieu gallery until April 14th. All images courtesy of in lieu gallery. 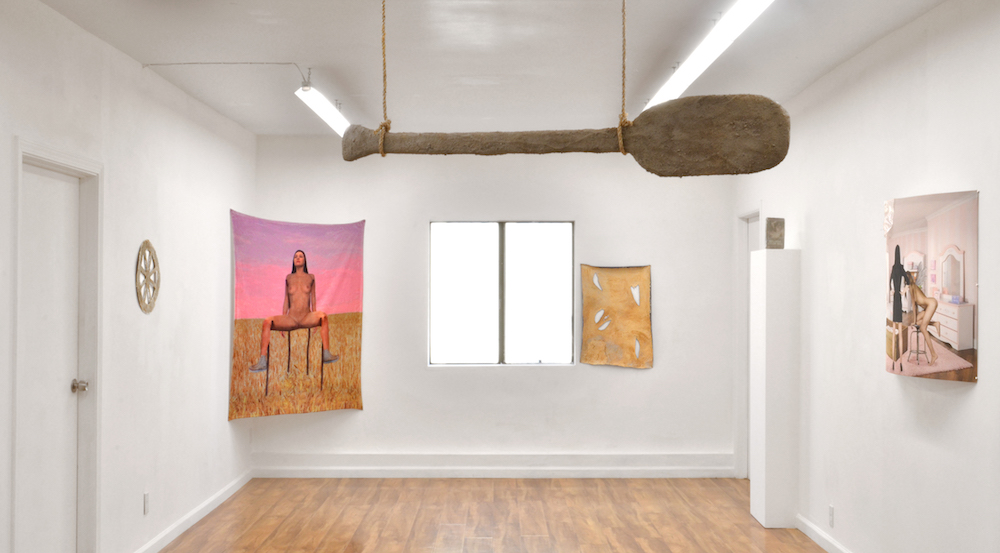