On November 9th, 2016 we woke up to sexism, racism, bigotry, and hate. We woke up a divided country.

While some of us woke up with a bitter taste on our tongues, in denial, and scared — others woke up safe, with a newfound sense of hope in our country, and a determination to “Make America Great Again.” Others woke up to a call to action.

Dr. King’s words ring as loud as ever a month after the presidential election, and his words inspired something significant. The Rattling Wall, a literary journal based in Los Angeles, and PEN Center USA, an international literary and human rights organization, together put out a call for post-election poems, stories, and essays.

Michelle Franke, founding editor of the Rattling Wall and Executive Director of PEN Center USA, posted on her Facebook and through PEN Center USA the call for writers to turn in their work. The point was to give many of those who felt scared, helpless, and shocked a platform to voice those concerns, and let “love Trump hate.”

People had six days to send their “protest, promise, rage, and wonder.” According to the the Rattling Wall and PEN Center USA’s post, work poured in from across the country. A myriad of individuals sent in their work: not only writers, but teachers, doctors, activists, mothers, fathers, and students.

A month later, on December 8th, the 100 poems, stories, and essays came to life at the Last Bookstore in Downtown Los Angeles, in a public reading of Only Light Can Do That: 100 Post-Election, Poems, Stories, & Essays. People filled the floor of the Last Bookstore with eager ears, listening to the writers read their work for the first time.

Zoë Ruiz, a staff writer for the Millions and Events Director at the Last Bookstore, helped organize the event with Michelle Franke, with only one week to get everything together.

“As a writer, editor, and curator, I believe building community is important,” Ruiz said. As the Events Director, it’s exciting to her that The Last Bookstore can be a space where “readers and writers can gather and celebrate their voices.”

The evening did just that, celebrating and showcasing the stories of men, women, students, fathers, mothers, and creatives and their experiences and emotions after Donald Trump was elected the 45th President of the United States.

Ruiz also wrote for Only Light Can Do That; her piece “After the Election” recalls the aftershock she felt. “It was more of being in the feeling state of shock, I was recently watching Angela Davis’s post-election lecture at the University of Chicago, and she talked about how she went to sleep and hoped in the morning the results would be different.”

“They sound in shock. They sound like victims retelling trauma.” – Zoë Ruiz

“We all sort of felt the rug pulled out from under us,” Angela Davis says in her lecture. And like Davis, and Ruiz, and like many of us, “went to sleep and hoped the morning would bring different news.”

Ruiz also believes telling our stories is one of the “best ways we can recover and heal from grief and trauma and that both this anthology and the reading offered safe spaces for people to share their stories.”

Writer and 2016 PEN Center USA Emerging Voices Fellow Chelsea Sutton also heard about the call for writers through Michelle Franke’s Facebook post. She said the call to action came at a “perfect moment” since it encouraged her to sit down and channel her feelings toward a specific project that “offered hope and conversation instead of the din of screaming desperation.” As for many, the election results were an eye-opener for Sutton, and in the aftermath, she tried to figure out what to do and thought deeply about what her role was now, as an artist.

Sutton’s piece in Only Light Can Do That was inspired by rape culture and “our ingrained habits of talking about women and their bodies as possessions, things to conquer and regulate.”

Sexism and the perpetuation of rape culture was a predominant concern throughout Donald Trump’s running, as he had been called out for objectifying women countless times. There were also an alarming increasing number of sexual assault claims made by women that dated all the way back to the 1980’s, all of which Trump has denied.

“It feels normal to watch your skin turn into paper. Cardboard around your knees, recycled fiber on the soles of your feet, glossy coated strips down your chest and around your boobs…” – Chelsea Sutton

Her essay, “The Fold,” felt good to read, Sutton said. “There are some lines that can be read as empowering, as a call to arms, and that’s how it felt in my body as I read them. Get ready, people.”

Second-year Narrative Studies major at USC, Nisha Malhotra heard about Only Light Can Do That through her English professor, David L. Ulin, whose work was also published in the anthology.

A month after the election, Malhotra said she had fallen back into her daily routine, because “after all, my personal life hadn’t changed yet.” But reading her poem, “Miss America” made her feel like she was back in the fight, “back in action.” She felt a strong sense of solidarity the evening of the reading. “They wanted to be [a part of] a community that had not given up or forgotten the things Donald Trump had said and done — about women, about people of color, about Muslims, all of it.”

“How can I infiltrate a country / I’ve lived in my whole life?” – Nisha Malhotra

Only Light Can Do That captures a specific moment in time, when all of our worlds shifted. It captures a moment that should not be forgotten.

“I see a long road ahead of us,” Ruiz said. “It’s going to be a constant struggle to resist the President-elect and his administration and all the damage they can do and all the darkness they can bring. Each of us has to be vigilant. We have to lead, we have to be the light.”

Photo by Mia Taylor, courtesy of the Rattling Wall. 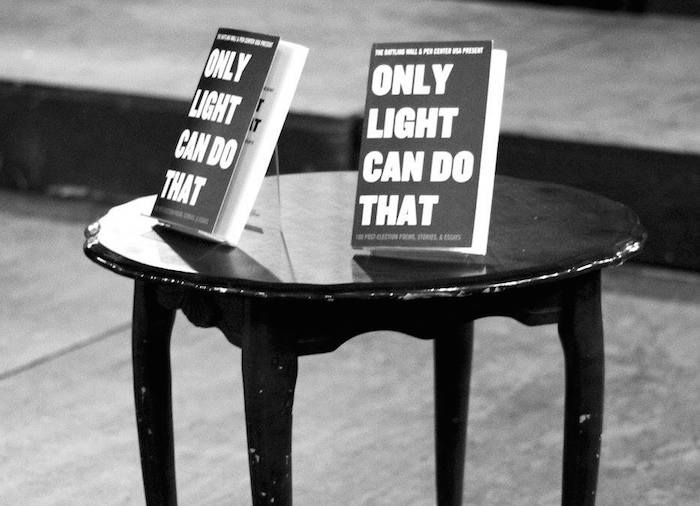