“If we’re going to end mass incarceration, we have to be willing to do uncomfortable things.” Founder and executive director of the Equal Justice Initiative Bryan Stevenson said these words, sitting alongside singer and songwriter John Legend, during their panel “The Criminal Justice Moment in Los Angeles” at Into Action — a free nine-day festival of art, music, and activism — on Friday, January 19 in downtown L.A.

The nine-day festival showcased politically and emotionally charged art that captured the essence of resistance — from Ernesto Yerena’s portraits that have made their mark at Women’s March across the country, a massive and vibrant migration butterfly representing our Dreamers by Brown Issues, to KKK hoods made of U.S. flags by Billie Grace Lynn.

Into Action brought together more than 200 artists from around the U.S. for exhibitions, installations, panel discussions, and workshops. Over 100 nonprofit organizations were present, including Youth Justice Coalition — which led a chant prior to Stevenson and Legend taking the stage: “Stop youth prisons! Build youth leaders!”

Bryan Stevenson, author of Just Mercy: A Story of Justice and Redemption, and John Legend, founder of Free America, a multi-year campaign to change the country’s view of the prison system in the U.S. (as well as renowned musician), discussed criminal justice reform, mass incarceration, and the connections between Jim Crow and the new Jim Crow, slavery, and current issues facing Los Angeles.

“We get so used to being in America that we forget how incredibly inhumane America is compared to other countries. There are no other countries that have life without parole for juvenile offenders — they don’t exist,” Legend said. “We have to understand that we’re one of the only countries still executing people. We’re supposed to be the beacon of freedom, of moral leadership around the world.”

The two discussed ending the school-to-jailhouse pipeline, juvenile incarceration rates, our obligation as a community to talk more about America’s history of racial inequality in order to change the current oppressive narrative, and on the power in proximity in order to get closer to communities in order to find the solutions to help them.

Stevenson, who has spent his whole career representing people on death row, said that Legend’s words hit close to home that evening.

“My heart’s a little heavy tonight,” Stevenson said. He represents 67-year-old Vernon Madison who has been on death row for 33 years. He was convicted in the 1985 killing of a Mobile Police Officer in South Alabama, and he was scheduled to be put to death by lethal injection on January 25.

“He’s a beautiful man, been on death row for 33 years and two years ago he had a stroke. After this stroke, he developed vascular dementia — he’s completely unaware of where he is. He doesn’t understand what’s going on. He can’t see. He uses a walker,” Stevenson said. “He’s going to be wheeled in a wheelchair to the execution chamber and when I talk to this man and he’s asking me, ‘Brian, what’s going on? I don’t understand. Why can’t I go home?’ When I hear these questions, it breaks my heart.”

But against the pain and heartbreak, Stevenson stubbornly believes we need to stay hopeful, if we’re going to deal with the issue of mass incarceration. “When I go into jails and prisons, I meet a lot of people and they’re fighting a battle — the battle they’re fighting is whether they can stay hopeful enough to survive, to do the things that allow them to keep their heart where their heart is supposed to be.”

“We need to model a kind of hopefulness for people reintegrating themselves back into society,” he said. “If we’re not modeling hope, we’re part of the problem. Hopelessness is the enemy of justice. Injustice prevails where hopelessness persists. I believe your hope is your superpower.”

Aside from staying hopeful, Legend also believes in the power of our collective role as artists and speaking a truth to power through your art. He quoted Paul Robeson who once said, “Artists are the gatekeepers of truth. We are civilization’s radical voice.”

However, as much as Legend and Stevenson urged for mobilizing our communities to get closer to the root of an oppressive system, and our obligation to do more to talk about our history of racial inequality, they also urged for us to get involved in local and state politics to keep our elected officials accountable. “I know it’s frustrating when we know who’s in the White House, when we know who’s in the Justice Department and their visions of taking this country in a backward direction because they think somehow it was greater back when our society was even more unjust, when there was even less opportunity — they think that’s when America was great and they harken back to that era, they want more of that.”

Director of Youth Justice at the Liberty Hill Foundation Julio Marcial posed a question to Legend and Stevenson that helped set the precedent for the panel: “we spend so much time talking about why the [criminal justice] system is broken. Can you share with us in Los Angeles, and across this country, things we can do more of so we can actually get to a solution?”

Both speakers tried to answer and challenge the question as well as they could. The message was loud and clear, they both agreed and challenged their audience to hold on to their love, and humanity. Those would be the common denominators in creating the foundation for real change.

“Every great movement that has accomplished justice in this country, in this world, has been rooted in something that has understood the power of loving one another, caring for one another, being committed to compassion and mercy — that’s the thing that distinguishes us from those who try to oppress, those who to try to abuse,” Stevenson said. “You know who’s taught me about love? My clients. It’s the condemned. They’re the ones that have taught me we’re more than the worst thing we’ve ever done.”

Header image by Hadas for Into Action 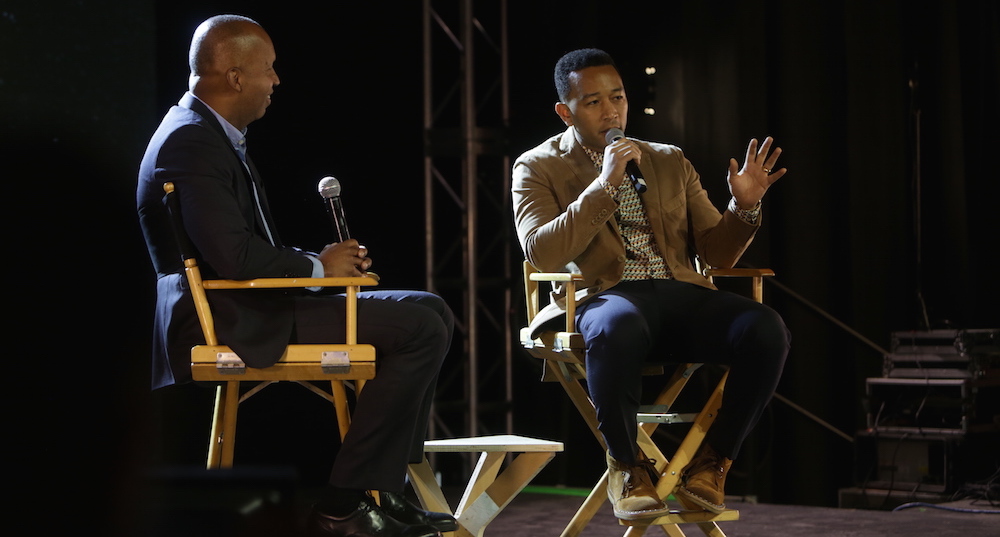