I’m not sure how it’s come to be that in writing I have voice, authority, while in real life — embodied — I’m meek, flickering, and habitually apologizing, as if for existing. If I knew why, it probably wouldn’t be, so I’ve been interrogating it lately, because I’m sick of the strangle.

Behind every public showing is a mess of private workings, sometimes these are conscious in the actor, sometimes not. I knew from the start that my reading series, Hard to Read, was made as a way to meet people; to feel less alone in Los Angeles; and to celebrate writing and writers, because it’s brutalizing, magical, undercompensated, and popularly-demeaned-in-this-country work — we deserve, at least, a little glamour. I think I also knew, without fully letting myself see, in the way one might shut their eyes in anticipation of a car crash, or while kissing, that the project would let loose a lot of latent talent — I’m crazy organized — and even more insecurities — that is: repressed desires — from me.

Hard to Read began as a monthly lit event at The Standard hotels in October 2016. It took nine months from ideation to that start. It happened kind of by accident. I was walking to the main branch of the Los Angeles Public Library one day, a few months into my move to Los Angeles from, like many artists lately, New York. I used to work in bookstores. Between 2010 and 2015, in Montreal and New York, I programmed some, and supervised more, bookstore events. Chris Kraus, Dan Graham, William Gibson, Tavi Gevinson, Arnold Schwarzenegger — he’s much shorter than his online profile portends. I liked these events, except they often felt, with their rows of folding chairs, stiff. I’m a nerd, but I also seasonally drop in on sex cults. I like a luscious atmosphere, freaks, surprises, and floor seating. So I was walking to the LA Public Library, which is an amazing resource (I can’t afford books myself, but with LAPL, that’s NBD; I’ve taken out 10 of David Bowie’s 100 favorite books at one time, along with Ann Rower’s Armed Response, Julia Kristeva’s Teresa, My Love: An Imagined Life of the Saint of Avila, and Chris Claremont’s X-Men: The Dark Phoenix Saga), and just as I was nearing the main entrance, I saw, on South Hope and 6th Street, The Standard hotel’s iconic upside-down logo. I remembered that my friend Joshua Taylor, who DJs as Prince Language, and who has one of my favorite personal libraries, was then working as a music director at hotel’s Manhattan High Line branch. Because, even just 20 months ago, I wouldn’t have considered doing any public thing, besides writing, which is like hiding, by myself, I immediately texted Josh if he’d maybe wanna organize some sorta lit thing with me in LA, because it seems like this is something the city is lacking, and maybe there’s a thirst for it, what with all the gentrifying demographics moving here, and maybe The Standard could be a possible venue? This was the season of my microdosing mushrooms and autodidactically learning tantric meditation so the material details are fuzzy but emails were sent, meetings were set-up and delayed, until eventually, I was sitting down solo in the pink and mirrored lobby of The Standard DTLA with three of its reps and Josh’s well-wishes to discuss lit events.

Five months later, I hosted my first Hard to Read, a launch for Natasha Stagg’s debut novel Surveys, which, though it was released eight months earlier by the LA-based publisher Semiotext(e), hadn’t had a proper showing in this city, or gotten enough attention: I felt. Since Surveys is a coming-of-age of a social media It Girl, I thought to ask IRL corollaries to that character to read alongside Stagg. They were artists: Tierney Finster @tstar7, Jasmine Nyende @standardized_sext, and Amalia Ulman @amaliaulman. From there, a standard was set: Hard to Readings would be interdisciplinary, grouped, and thematic.

Whenever I’ve hosted a seated reading, my voice croons like I’m in love in bed. If I have to stand, self-consciousness stuns me stupid. I prattle on about being self-conscious and make vacuous Valley Girl introductions: “This next reader” — I’ll often even blank on her name, having read everything she’s ever written: “is just like, the best.”

Two months ago, in New York, was the worst. I hosted a Hard to Read pop-up at Bridget Donahue gallery in Chinatown pegged to New York Fashion Week. The roster was stunning. Journalist Christopher Glazek read from his introduction to the re-edition Gary Indiana’s 1997 nonfiction novel, Three-Month Fever. Marjon Carlos read a piece she published in Vogue about civil rights style. Ser Brandon-Castro Serpas and Alicia Novella Vasquez read raw, sensitizing notes from their iPhones. Julien Ceccaldi debuted his latest comic book, Human Furniture. And poet Ariana Reines delivered a sermon on this solar revelation she received while training for a performance at the Whitney Museum. The audience, I thought, couldn’t be luckier, if only they didn’t have to listen to me. My inner voice pounded through the proceedings. What’s wrong with you! Why can’t you be more natural! Get over yourself! Speak from the heart! Grace, peace, anarchy. (I started my hosting with a confused confession about having, “a major — no, minor! — no, middling! mental breakdown when I lived in New York doing fashion reporting.”) Afterwards, one of my friends, this Caravaggio beautiful architect who’s zen-like in his quietude, reassured me, “Confidence is overrated.” His boyfriend, who I’ve known since we were 14, rejoined: “It’ll come with practice. We weren’t educated in public speaking in Canada.”

I suspect it has something to do with stature. Seated, we’re on the same level. Eye-to-eye, I can even be funny. At Bridget’s gallery, standing before 60 seated bodies, white light bouncing off white walls startling 5’4″ me… I’m not used to people looking up at me.

I started stating, four events in (trying to court funding), that Hard to Read seeks to promote print reading and active listening as vital meditations for our maddening current. Experience tells me that people — especially young people: my peers — aren’t reading books. The patience and openness it takes to surrender to a long prepared text, like really listening to another, in all our missives and fumbles, is, I believe, politically radical. Americans make such rash assumptions, clammering over one another with their [unintelligible yelling]. Internet brain is like zip zip zip. I hear a lot from 20-somethings: “I have anxiety!!” “I’m depressed.” “I’m just soooo lost!” Studies have correlated literary fiction reading with increased levels of empathy, which feels true, and because of this (getting out of one’s own head), I’ve found reading — fiction, nonfiction, poetry, the lot — to be an effective treatment for my anxiety, depression, and mania. It’s not an easy sell — too real, and no cure-all — but I’ve a vast curriculum I can prescribe to those wanting to, “awaken to the possibility,” as American poet Fanny Howe writes, “that I was feeling justifiable despair, not depression; social outrage, not personal anxiety.”

I also started saying that, “Hard to Read wants to give writing as sexy a social showing as fashion and art.” Attention, community, congregation. And that: “I host artists, actors, and filmmakers as readers — people who work in the visual — because the thought behind the best of that is often overlooked in our scrolling liking surface culture.”

I love being seen and heard — that’s my problem. It enlivens me the way I heard Kathryn Bigelow say of her actors: the spotlight turns us on. But it’s like, shame-stuffed and insecure, my arousal is dysfunctional. My hosting intros can be like premature ejaculation, I limp offstage.

“As soon as you stop wanting something,” Andy Warhol dictated into his book The Philosophy of Andy Warhol (From A to B and Back Again), “you get it. I’ve found that to be absolutely axiomatic.”

A way to stop wanting is to give. In writing this — which is what all of my writing is, a rubbing, revealing what’s beneath the surface — I just realized that I’ve been using Hard to Read, and its dear readers, to get what I want: space to be heard, and respected, in kind, to not be interrupted, or written off; patience, pink couches, champagne, cocktail parties; and a reverence for feminine authority — receptivity, wisdoms of uncertainty, kittenish unseriousness, and like, vocal fry. Because I’m so angry. I’m angry at how I’ve been abused with language; bullied, gaslit, lied and sold to. I’m angry that I’ve let this quiet me. I’m pissed that what passes for authority in this country is pretense, loudness, a baritone, and that I’ve bought into that act. The rare baritones I’ve hosted, I’ve noticed — men who have petitioned to read, and women who act like them — have been boring! Rote, inobservant, self-promoting, and professionally published. Many of my favorite readers are as of yet unpublished. They’ve never written for a public before, let alone read aloud, and they get up there and share these acute truths, vulnerabilities, and comedy. That’s the thing about the quiet ones, we are watching watching watching.

Here’s to another year.

Hard to Read is a monthly lit series organized by Fiona Alison Duncan and hosted at the Standard hotels. On Wednesday, November 8th, at the Standard Downtown, Duncan will host Jenny Zhang, Vanessa Angelica Villarreal, Alake Shilling, Symrin Chawla, and Gelare Khoshgozaran in a reading themed “I AM THE AMERICAN DREAM.” Follow @hardtoread on Instagram for updates on the series and its “diffusion line,” Ready-to-read by Hard to Read, which consists of fashion-seasonal books presented at Eckhaus Latta’s rEtail shop in Arlington Heights, Los Angeles with synchronistic events. 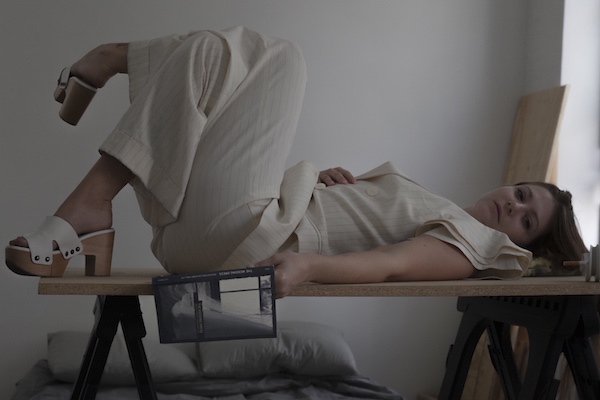