First things first: though the follow-up email (the one you get after purchasing tickets) is full of suggestions, you don’t have to wear black and white, and you don’t have to fill out the online questionnaire: either way, you won’t be turned from the door.

That said, black is good, right? And white is okay. When in doubt black and white together, or just one or the other — well, it’s easy enough to comply on that count. All five of us — my husband, my kids, my daughter-in-law — were wearing black the other night, as I recall.

And if you do happen to fill out that questionnaire — if, like me, you’re flattered to be asked? And determined to be honest? And if you nonetheless after the fact regret having sent in your answers — well, not to worry. I needn’t have worried anyway, though I did: having filled out that thing, I was afraid that I wouldn’t be able to anonymously slump in my seat in the dark; that I’d have to engage somehow, in some potentially embarrassing way (“Mom, you filled out that form? Oh Mom…”). But maybe that’s the reason they ask in the first place, can it be? To raise the stakes in that way? Audiences are and should be implicated in the theater — we should and do have a role to play, we-the-receivers, regardless of whether or not we have scripts, or props, or wardrobe…

So that’s my point: dress as you please — fill out that questionnaire or don’t — but definitely take you and yours downtown to Maple Street this weekend; catch this show before it closes, you’ll be glad you did.

Why? you ask. Tell me more, you say, what’s it about? Well, but I don’t want to be a spoiler — hang on, let me look to see what you’ll discover when you’re only Googling for tickets or reviews.

With the former in mind, they don’t tell you very much on the site: only that Think Tank has joined forces with the Xiong Collective to bring us Lin Bo, a Chinese artist/dissident, recently exiled to the United States. When we spoke to him before the show — Mr. Bo was actually milling about the gallery with the rest of us — he explained that this was his first time in LA: “Such an exciting city,” he said, and his English is flawless, though heavily accented and occasionally difficult to understand. However, it’s worth leaning in, smart as he is, and evidently gifted. Then too, when he reads from his memoir (still in galleys) he slows down a bit; he’s a presence, Mr. Bo, and his story will move you; and he does have so much to say, by the way, about the relationship between the artist and his audience. Plus, he’s just very nice. He took note that we’d brought the whole family to hear him. He actually asked us about our own work. So solicitous for a dissident. For an exile. For an artist.

And now looking at the LA Times blurb of a review, this is pretty much all you get: “For this first environmental staging of Christopher Chen’s 2016 Obie award-winning brain teaser of a play, interactive theater specialist Ed Sylvanus Iskandar collaborated with local stage performers and designers, visual artists and restaurateurs.”

Exactly right — this is definitely a hybrid experience: the opportunity to wander the gallery, to hear from the featured artist turned writer, turns out to be just the first act.

Also true, there are treats. Egg rolls. Fancy sodas in fancier cans. Teas — with or without benefits. There are fascinating people to meet — and there’s all that art on display, quite eclectic — if you’re there to see Mr. Bo, you maybe won’t give the visuals all that much thought, not at first, although afterwards you’re likely to wonder: what about that art? Was that art? Who actually made that art, who? Does it matter if I know or I don’t who the makers are?

Beforehand, though: if you speak with Lin Bo, as we did, you might feel sheepishly pleased with yourself, lucky and happy for the opportunity to present as a fairly civilized and well-informed American. These days — well, it’s mortifying to be us, isn’t it? On the other hand: assuming you’ve found your way downtown, you’ll feel better about yourself. After all, you’re a conscientious citizen of the world — interested in people who aren’t just like you — and already aware, or if not, about to be apprised of the various arguments for and against cultural appropriation.

Although I should warn you: whatever ideas you might already have about why we like stories, and tell them — and make them our own — in the course of the evening, another artist, Wang Min (also from China), who apparently curated the event in collaboration with Harvard and USC-educated award-winning filmmaker and actor Jessica Kaye, is likely to encourage you to reconsider what you thought you knew.

And — what else can I say without saying too much? Well, you may leave the theater feeling confused, not to say duped — delightfully so, and on various levels; in the moment, and afterwards, the next day and the next, you might even find yourself not only blushing (what a very good audience you were), but questioning your understanding of the issues at hand:

Should we engage with other people’s stories?

If so, what level of engagement is appropriate?

Whose permission do we need to tell those stories as they inform our own?

And about our very own stories: is it our right to embellish? How far can we go?

What exactly do we owe our audiences?

For whom do we make art, and why?

Very serious, right? On the other hand, I laughed. I laughed a lot. I went home laughing, I woke up laughing. I’d been had, as it were, that was clear, although such a gentle reckoning it was, initiated by a performance not just provocative but generous. And kind. And, in spite of everything, a kind of affirmation of what we’d have to believe in order to go on: however we spin things after the fact, what happens between people in the moment — friends and lovers, writers and readers, artists and actors and their audiences — can turn out to be beautifully and memorably affecting and true.

District 798 is showing at Think Tank Gallery through December 10. 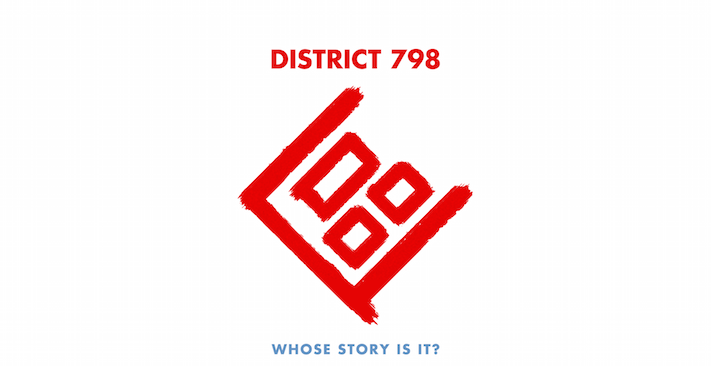