“I don’t have the chops to decipher this bewildering range of human activity that confronts me. I can’t figure it out — can you?”

I hear these words in a smoky baritone as I enter a darkened screening room. Three floor-to-ceiling screens are angled in a trapezoidal proscenium — the setup doesn’t overstep to physically ensconce the viewer, but quietly fills one’s field of vision. It’s complemented by the voice, which unpretentiously searches for insights without imposing a conclusion.

This is also a voice apocryphally self-trained in the art of hypnotism, so I can’t help but lean against the wall to listen alongside a few dozen others. We’re in an installation space created by filmmaker Kara Blake for the Musée d’art contemporain de Montréal’s sprawling exhibition Leonard Cohen: A Crack in Everything. Instead of organizing a through-the-ages career retrospective, the museum commissioned 40 artists to create artistic responses to Cohen’s work that refract his cultural output. For her piece, The Offerings, Blake collaged video and audio clips from five decades of Cohen interviews into a continuum of reflection, loosely organized by theme — spirituality, love, writing, and music — while spanning the breadth of his lifetime as it pivots between the ‘70s and the mid-aughts and back again.

As I listen and watch Cohen carry home groceries in a clip from a CBC documentary, I’m reminded of a 1980 radio interview in which he calls himself the world’s “oldest living teenager,” remarking, “I think younger people are interested in information in a way that older people are not…They have an appetite for experience and that’s what a writer is supposed to do, clarify experience.” For Cohen, clarification meant an honest description of uncertainty. When faced with an inexplicable world, he sought anything that might make it intelligible — most often, religion, sex, or poetry — but never presumed the possibility of emerging from that search with closure. This not-knowing is at the heart of “Hallelujah,” and it also pops up in his 1966 speed-fueled novel Beautiful Losers: “I do not think that a saint dissolves the chaos even for himself, for there is something arrogant and warlike in the notion of a man setting the universe in order…He rides the drifts like an escaped ski.”

Glancing around the room, the median demographic skews towards late middle-age. During yesterday’s press visit, I had spotted one other reporter in her 20s; at today’s public opening, I’m closest in age to a set of teenage twins. I’ve been trying to decide if I feel young or old, or out of place, but the question fades away. Everyone here is transfixed by something in this voice, deepening with cigarette use as Blake cuts across decades, looking for truth in disorder.

A Crack in Everything, which runs through April at the MAC, is named for half of a couplet in Cohen’s song “Anthem” — the other half of the lyric resolving: “that’s how the light gets in.” Instead of posthumously narrowing Cohen to one theme, the title captures the show’s spirit of artistic range.

“This exhibit is a response to the 375th anniversary celebrations in Montreal, where I understood that we could tap into some additional funding to make a more ambitious exhibition provided that it wasn’t something we would normally do,” says John Zeppetelli, the head curator of the MAC and co-curator of the Cohen show. “This started two years before Leonard died. We needed his approval, and we got it because we said, ‘We’re not doing a sycophantic exercise. You basically will see your work revisited with new inflections, possibly new meanings, and new approaches to it. The base of all of this reflection is an admiration for your work, so it’s very much a tribute, but we want our artists to feel very open.’ He said, ‘I won’t get in your way’ — which is such a beautiful, Cohenesque thing to say — ‘but they need to understand, I’m not going to the opening.’”

As a space conducive to introspection, The Offerings starts with Cohen and ends with the viewer, much like the opening room of the show: another multi-screen, archival deep-dive by George Fok called Passing Through. Covering three walls with up to nine unique video feeds, Fok molds music videos, live performances, and backstage documentaries into a found-footage travelogue through Cohen’s discography. By chronicling his eclectic taste — he’d combine country with Europop, blues with klezmer, Irving Berlin with R&B, and at his most eccentric, French-Canadian folk songs with Mariachi ensembles — Fok avoids privileging any single version of Cohen. Like Blake, he finds beauty in juxtaposition; by stitching a 1968 performance of “Bird on the Wire” to another rendition from 2013, he can crystallize 45 years of creative maturation in one song’s amber.

From Fok, visitors shift into more self-directed and conceptual territory. Unadorned glass doors line the walls, leading to enclosed installations; narrow corridors snake towards others. The most intriguing of these find a strength in first-person specificity. Michael Rakowitz, in struggling with Cohen’s decision to play a concert in Tel Aviv in 2009, combines a 12-minute film with a display case of mixed media artifacts — photos, newspaper clippings, vinyl records, handwritten Sharpie notes, and a typewritten letter to Cohen that he reads aloud in the film’s voiceover — that infuse his piece with a hand-crafted materiality. Other artists take minimalist approaches to found objects, like Taryn Simon, who displays the front page of the November 11, 2016 New York Times in an illuminated case: beneath the fold is Cohen’s obituary; above, an image of Obama and Trump’s first Oval Office meeting.

The show rewards sustained contemplation — instead of a hurried mob scene through six mid-sized galleries, it provides smaller spaces for rumination, allowing visitors to prioritize their focus however they’d like. Turning a corner, you might smell incense as you step into the Sanchez Brothers’ replica of Cohen’s home office, complete with his MacBook, Casio keyboard, slippers, and ashtray; through a window, there’s a digital projection of Cohen watching passing traffic on the street. As a memorial, it instills a sensation of ghostly invasion, of overstepping into another person’s domestic space. It’s in keeping with a precariousness that runs through the exhibit: a specter of close proximity with someone whose work strove for unmediated emotional intimacy.

Slipping through one of these glass doors, I discover a Wurlitzer keyboard surrounded by a cluster of analog amplifiers. I notice another dozen speakers lining the walls as I approach the keyboard and press a key on The Poetry Machine, built by multimedia sound artists Janet Cardiff and George Bures Miller. Cohen’s voice, mid-verse, erupts from a speaker right next to my ear — each key on the organ triggers a recording of Cohen reading a poem from his 2006 collection Book of Longing, each filtered through a different amplifier. Cocooned by a collage of verses, the experience comes to feel like a séance by way of an audiobook.

I fiddle with the keys, stumbling upon one of my favorites, “Titles”:

A guy in a plaid blazer comes into the room; suddenly Cohen’s voice feels too loud. I step back to let him have a go at the Wurlitzer.

and now Gentle Reader / in what name / in whose name / do you come / to idle with me / in these luxurious / and dwindling realms / of Aimless Privacy?

Hunched forward and hands folded, a fortysomething man sings softly to himself. We’re sitting on cushions in the exhibit’s listening room, which cycles through a playlist of 18 Cohen covers commissioned by the MAC, all exclusive to the museum space. A visualizer designed by one of the MAC’s technicians fills the walls with dissolving colors as Lou Doillon, daughter of Jane Birkin and filmmaker Jacques Doillon, offers a stark, contemplative take on “Famous Blue Raincoat.” My neighbor sings every word, and leaves the room as soon as it ends.

This pattern repeats: others enter and quietly take their moments. It reminds me of the night before, when I visited an outdoor bar on the edge of the St. Lawrence to view Jenny Holzer’s opening week contribution to the show: three scrolling columns of Cohen’s poetry projected onto Silo No. 5, an abandoned factory in the Old Port. Its premiere coincided with the first anniversary of Cohen’s death; the atmosphere struck a balance between those two moods. Amidst clusters of conversation, dozens of satellite viewers barely moved, leaning against the guardrail in a meditative reverie. For the three days I’m in Montreal, it feels superfluous to ask people point-blank about their connections to Cohen — somewhat because it’s written in the looks on their faces or their CaféPressed sweatshirts, but mostly because the atmosphere defies premature articulation. Most people I meet around the city are cordial, but pointedly flying solo, seeming to relish sinking into the private, yet collective, headspace of a pilgrimage.

Something about the listening room brings these feelings to a head — the chance to revisit a connection to a familiar song, or even discover it anew, as I do with Julia Holter’s cover of “Take This Waltz.” The Casio keyboard and synthetic strings of the original recording always rung a little cornball for my taste, but Holter dials it back to solo voice and piano, then builds layers upon instrumental layers into an evocative swell. It’s a more appropriately overwhelming setting for Cohen’s own translation of Federico García Lorca’s “Little Viennese Waltz,” conjuring vivid images of “a bed where the moon has been sweating.”

The room’s best covers are similarly mindful of how texture serves tone, especially when it comes to tackling Cohen’s much-maligned 1977 album Death of a Ladies’ Man. Produced haphazardly and largely from first takes by a gun-toting Phil Spector, it’s possibly Cohen’s rawest record; Rolling Stone called it a “doo-wop nightmare.” It’s also lewd to the point of parody, which makes a track like “Paper Thin Hotel” perfect for Jarvis Cocker, the bard of voyeurism. While Cohen’s version feels like peeling antique wallpaper, Cocker manages to wryly deliver its flippant rhymes without devolving into total camp — a fitting landing for this weirdly earnest tale of compartmentalizing jealousy while eavesdropping on bad sex through a hotel wall.

Much of Death of a Ladies’ Man is messy in the same way: it’s patently uncool, but when it works, it’s achingly genuine against all odds. The album’s best track, “Memories,” flashes back to an early ‘50s high school dance with a dreamy doo-wop progression; there’s something blurred and ephemeral about its blown-out texture, something plaintive in the vocal that captures the desperation of teenage horniness without turning trite or ironic. Here rendered by The National, Sufjan Stevens, Icelandic video artist Ragnar Kjartansson, and Arcade Fire’s Richard Reed Parry, it swoons with reverb and unrequited longing.

Cohen once said that understanding his songs is “like understanding an embrace…like that Jesus verse in ‘Suzanne.’ Everyone knows what that means, but nobody can say what it means — and it’s that kind of event that I’m interested in.” Rather than an obstacle, the MAC exhibit treats this disconnect as a narrative hook, a designated jumping-off point into broader questions. As an incubator for seekers, it transcends Cohen without abandoning him.

The next day, I’m pressed against the back wall of the Fok piece, peering over the crowd to watch a sprightly 73-year-old Cohen wrap up a performance of “Tower of Song.” “Tonight, the great mysteries have unraveled and I’ve penetrated to the very core of things,” he says. “I’m not the sort of chap that would keep this to himself. Do you want to hear the answer?” Cheers from the diegetic crowd; soft laughter from the non-diegetic one.

Cohen leans into the mic. “The answer to the mysteries is…” A pause. Then, in tune with the song: “Doo-dum-dum-dum, dee-doo-dum-dum…” 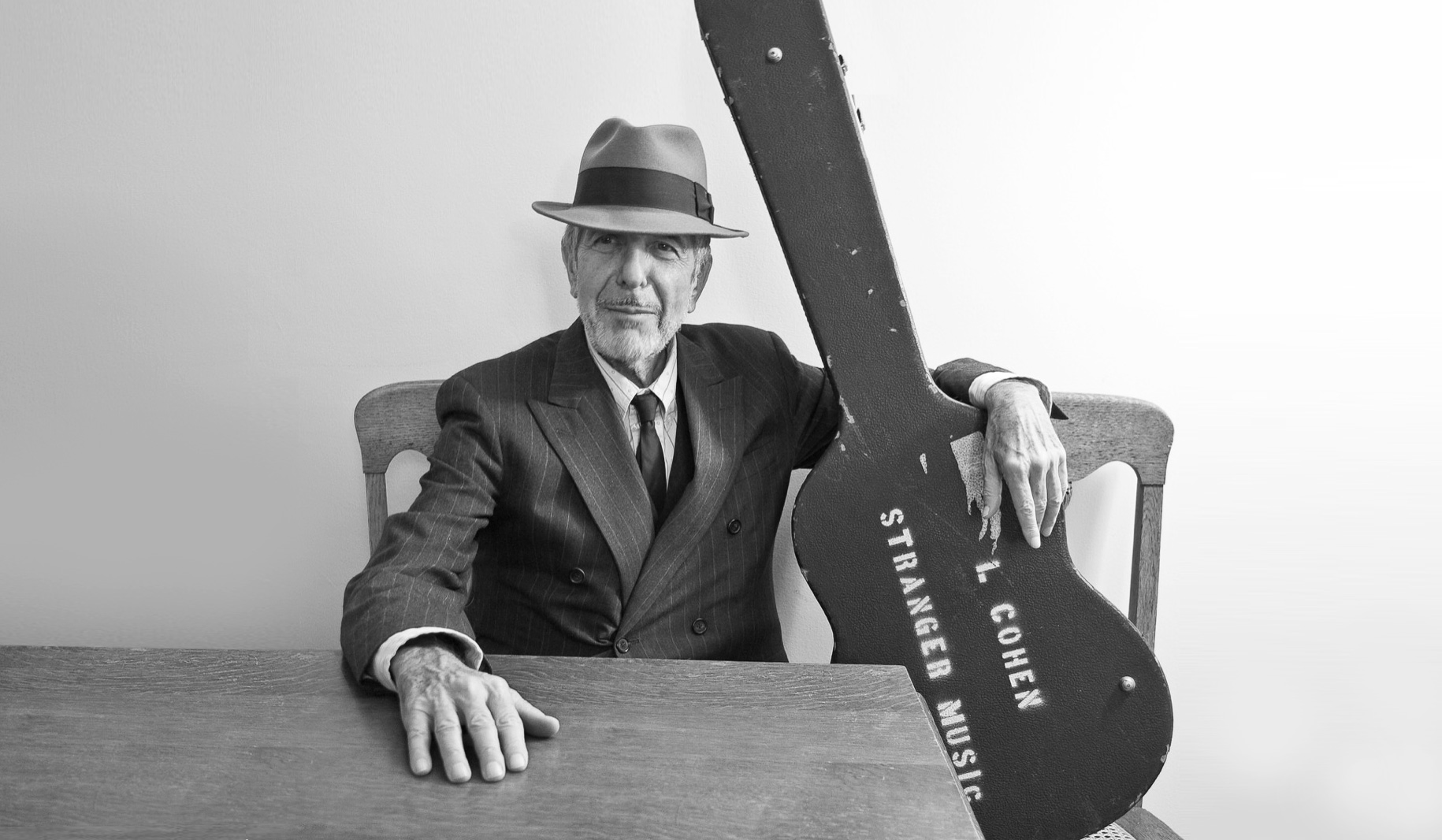