On the 4th of July, Christine Granados landed in the San Fernando Valley with her latest collection, Fight Like A Man and Other Stories We Tell Our Children. The Southern California leg of her book tour included a reading at Skylight Books on July 5 and another at Tía Chucha’s Centro Cultural & Bookstore in Sylmar on July 8. At Tía Chucha’s, she was joined by Jesus Treviño, Alicia Gaspar de Alba, Andrea Gutierrez, and Alyssa Granados.

The event was designed to promote Granados’s new book, but also to celebrate Latino literature as a whole. At Tía Chucha’s, Granados aimed to merge la literatura con la música — her niece Alyssa Granados strummed her guitar in between each reading — and bring together different writers of color, to share their diverse narratives. “Tía Chucha’s is a unique venue for people of color, for readings, music performances, and social gatherings,” author and television director Jesus Treviño said. “I think the more readings we see at venues like Tía Chucha’s, the more awareness there will be for other venues to feature Latino writers.”

Born and raised in El Paso, Texas, Granados writes about working class Mexican-American characters, their trials and tribulations. “I want readers to understand that the working class along the border are wonderful and flawed individuals trying to make their way through the world,” Granados said.

After her reading at Tía Chucha’s, Granados was headed to Pegasus Books in Berkeley on July 26, and she would finish her book tour in California in San Francisco at Alley Cat Books on July 27.

Granados has been a Spur Award finalist and winner of the 2006 Alfredo Cisneros de Moral Foundation Award. Her fiction and nonfiction have appeared in the Evergreen Review, Callaloo, NPR’s Latino USA, Texas Monthly, Texas Observer, and El Andar, along with other anthologies. She’s currently working as Projects Manager at the weekly newspaper Fredericksburg Standard-Radio Post — owned by her husband Ken Esten Cooke and Moser Community Media.

She believes it’s important to show others that these communities deserve to have stories written about them and they deserve to be celebrated through that writing as well. “Just because we cannot afford to pay off politicians, buy wings at prestigious universities, or send our children to elite boarding schools does not mean our stories aren’t important,” she said. “We still deserve to see our stories and experiences written about and chronicled. Fight Like A Man is how I’m showing my children that Mexican-Americans, our troubles, struggles, humor, joys, and life matter.”

Her first collection of short stories, Brides and Sinners in El Chuco, was published in 2006. Ten years later, Fight Like A Man came to fruition.

“It took me 10 years to write,” Granados said. “My first one was published in 2006, and then I had children, and then I had a full time job…It takes a while to write these things so it was a long process. I’m hoping the next one will be shorter, but I haven’t even started.”

For her next writing project, Granados is thinking of a book of essays, she “wants to write a biography of Estela Portillo-Trambley, the first Chicana to publish a collection of short stories in the U.S.” Like Granados, Trambley was from El Paso.

All four authors, some from Texas as well and some just meeting for the first time, read their work to the crowd in the sweltering heat. Each piece of writing dealt with a different aspect of Latin history or the Latino experience — stories dealt with first- and second-generation struggles, becoming more closely familiar with their latinidad, being front and center on important Latino/Chicano movements, and the inspiration gleaned from other Latino figures. It was a melting pot of literary fiction and nonfiction, and interconnected narratives in which the crowd shared.

At last, Granados read her short story “Addressed” about her mother and the “crazy way she uses her address book.” “Addressed” was loosely based on Granados’s own experiences. “When my father died in 2014, the entire family spent a lot of time in hospitals and I took a lot of notes from that time, which I included in the story,” she said.

The story begins with Granados’s character trying to keep it together after learning news of a family member passing. Sitting on a “plastic green bucket seat in the sterile hallway of the hospital,” her character holds an address book, preparing herself to call everyone with the news. It’s nearly impossible to find everyone by their actual name because of the unconventional ways her mother uses the address book.

“When we were growing up — and to this day — she had this address book that no one could use because of the short hand she listed everyone’s phone number within it,” Granados said.

As she sifts through contact after contact, Granados’s narrator weaves in and out of childhood memories like a lucid dream. Granados writes of a tacky Bible her mother gave to her as a child — the first and only book her mother bought her. It was their “secret language of love.”

Finally, her narrator finds what they’re looking for in the address book; Granados read: “It was shorthand for ‘I love you.’” With tears in her eyes, she finished reading. 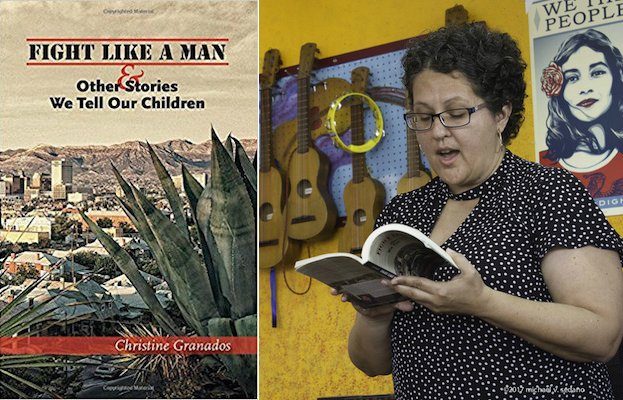