This piece was written by Alexander Woollcott, New Yorker drama critic and Algonquin wit, one night in 1932, after attending the funeral at St. Patrick’s of Father Francis Duffy, the most famous army chaplain in World War I, who at the age of 46 had volunteered for service in France with New York’s Fighting 69th Regiment. Woolcott’s tribute to Duffy was the more surprising because Woolcott, the model for Sheridan Whiteside in The Man Who Came to Dinner, was not only notoriously caustic and acerbic but also an outspoken atheist. But: “There were many of us there today,” Woolcott wrote of the funeral, “heathens like myself, who without belonging to his outfit, had nevertheless been attached to him for rations — of the spirit … While we waited, my own thoughts jumped back to that desperate October in 1918 when his regiment, the old 69th of New York, was cut to ribbons in the Argonne …”

After a few anecdotes about Duffy’s matchless gift for keeping up the spirits of the men — for the most part, impossibly young New Yorkers who faced some of the worst fighting in the war — Woolcott goes on to recount the memory that meant most to Woolcott, and to Duffy himself, from that gruesome time:

For him the most electric moment in all the war came on a night of June moonlight in Lorraine when the troops of the old 69th discovered that the shiny new outfit which was relieving them in the trenches was also from New York. The war had picked them both up by the scruff of the necks, carried them across the world, and dropped them in the French mud, and here they were passing each other on the road — one regiment going in, one regiment going out. There was some excitement as old neighbors would identify each other in the moonlight, and one unforgettable moment when Father Duffy saw two brothers meet. In their emotion they could only take pokes at each other and swear enormously. Then, lest all these functions draw the attention of the enemy artillery to this relief, order was somehow restored and the march went on, mingling prohibited, speech of any kind forbidden. So these passing regiments just hummed to each other very softly in the darkness. “Give my regards to Broadway.” The rhythm staccato, the words unnecessary. “Remember me to Herald Square.” The tune said the words for all of them. “Tell all the boys on 42nd street that I will soon be there.” In the distance the sound grew fainter and fainter.  Father Duffy had a lump in his throat. 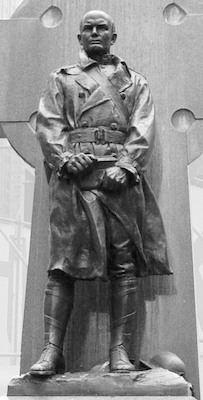