In anticipation of the National Chorale’s performance of Mozart’s Requiem, his monumental final work, thoughts of Wolfgang were swirling in my head. I thought of that scene in Amadeus, where Mozart, dying from some unknown disease, is coerced by his frenemy Salieri into dictating his Requiem note by note, so that the sure-to-be-forgotten Salieri can pass it off as his own, thereby securing a place in history as the author of at least one masterpiece.

The scene makes for great drama, but as every composer knows, it’s complete fiction. That type of compositional dictation is impossible; and even suspending disbelief, assuming Mozart could do anything while dying, it couldn’t have been done in the brief time Mozart had left to live. Trust me, it didn’t happen.

I’ve heard the Requiem performed live many times, and I never go to a performance without re-reading Opus Ultimum: The Story of the Mozart Requiem by Daniel N. Leeson. This self-published gem was recommended by the gnome-like algorithms of Amazon, who know me all too well. When a new book about Mozart is published, all they have to do is show me the cover and I click. Before hearing a Requiem concert I turn to this book to remind myself of what Wolfgang actually wrote, partially wrote, and never wrote at all. This knowledge doesn’t lessen my appreciation of the masterpiece. I, like millions of listeners and critics, have been moved to tears by Requiem’s power, but I like to be reminded of the facts (or at least as Leeson sees them).

The actual story of the composition of the Requiem is a sensational whodunit — or rather a who-wrote-it — mystery, and Leeson (formerly a bassoonist with the San Jose Symphony) captivates us as masterfully as any good mystery writer, taking us through the work’s extraordinary history.

Because of the recent discoveries of the original autograph manuscript, it is clear that Mozart died before he could complete the Requiem. This is an accepted fact. Also accepted is the fact that one Franz Xavier Süssmayr, a composer who would otherwise have faded into the annals of time, finished what the master could not. But, according to Leeson, that is not exactly the whole truth.

Many hands took part in the Requiem’s completion, and thereby hangs a tale. A minor aristocrat, one Count Franz Paula Joseph Anton Von Wallsegg, lived outside Vienna with his young wife. Wallsegg, an amateur musician, was known to commission composers to write for his orchestra and pass the works off as his own. He would receive the score, re-copy it in his own hand, and distribute the parts to the ensemble. In his monumental tome, Mozart, Maynard Solomon quotes a Wallsegg musician:

We had to guess the composer. Usually we guessed the count himself…; he would smile at that and be pleased that he had (or so he believed) succeeded in mystifying us; but we laughed because he thought us so credulous.

When Wallsegg’s young wife died, he wanted to “write” a Requiem to memorialize her, and so he commissioned the greatest composer of the day, with the signed proviso that Mozart relinquish all rights — including authorship — to the Count. Maynard Solomon does indeed credit Wallsegg with commissioning the Requiem, but makes no mention of how the work was completed, and the whole story is given in a single paragraph. Mozart, needing money, agreed and began the composition. At the same time, he was finishing The Magic Flute, his final symphony, and his Clarinet Concerto, so the commissioned Requiem was another piece added to his long list of assignments. Sadly, he died before he could finish it. And there the Solomon account ends.

But who did finish it? And how much did Mozart actually write? According to Leeson’s version, it turns out that Mozart completed just one of the movements. Only the Requiem Aeternam could have been handed to an orchestra and choir and performed. All other movements were unfinished.

But Mozart had finished the vocal parts and bass line for the whole Requiem, except for the “Lachrymose.” That is a very good thing, because with the vocal writing complete, a musician could “fill in” the orchestra. Of course, filling in the orchestra in a Mozart piece requires, well … a Mozart. As for the “Lachrymose,” Mozart had written a mere eight measures; so the entire movement had to be imagined and constructed.

Mozart’s widow Constanze, by necessity, had to transform herself from a hausfrau into a ruthless businesswoman. She knew exactly what she had to do to survive. She needed money to get the Requiem finished (at that point, only the advance had been paid), and it had to be written by Mozart, who was dead.

Leeson’s book offers us, in precise detail, all the hands involved in the composing, the copying, and the deception, not to mention Constanze’s heroic efforts to keep Mozart’s Requiem alive. Though some of this may be Leeson’s conjecture, given the facts he presents, the conclusions seem perfectly reasonable.

I won’t give away how it ends, just as I wouldn’t give away the ending of a new Anne Perry novel. But, as Leeson unravels one of the world’s greatest musical mysteries, we do learn who wrote what, whether Süssmayr was having an affair with Constanze, and what happened to the handwritten manuscript. Of particular interest to the music scholar may be the type of paper Mozart wrote on, the staff configurations, the clef assignments, and the nuances of his composing habits. (And if, like me, you can’t get enough of this sort of thing, read Leeson’s The Mozart Forgeries — another book I thoroughly enjoyed.)

I suppose musicians and Mozart fans will appreciate the book slightly more than the casual reader, but I’m guessing anyone who is about to hear a performance will find it entertaining.  This book is also a must-read for anyone fortunate enough to be singing the piece.

Going to the concert at Geffen Hall, I felt totally prepared. (I’m one of those people who enjoys reading a guidebook to an art museum or a city before I visit.) Last night, I entered the auditorium knowing which bits Mozart wrote and which bits Süssmayr actually composed, and I was ready to sit in judgment. Reading the notes, I smiled, feeling exceedingly full of myself as I mentally corrected the program.

However, all those details, all those facts flew out the window as I listened, for the National Chorale’s magnificent performance was transcendent.

This season, the Chorale had given me many nights of joy — concerts of Gershwin, Beethoven, Handel — but this Requiem was their triumph. Their passion, their precision, their sheer exuberance overwhelmed the audience, and credit must be given to their new conductor, Everett McCorvey, who in two short years has transformed the Chorale into the greatest choir in New York City.  McCorvey has proven himself to be the most talented, sensitive, expressive, and commanding of all the choral conductors in a city of sensational conductors.

Starting with the very opening, the Requiem Aeternam (the only movement completely written by the master), the glorious singing of the choir eradicated the gruesome acoustics of the happily soon-to-be knocked down auditorium, transforming the dry Geffen into Carnegie Hall. The music floated in the air, reverberating, inviting the entire audience into rapture.

I knew both mezzo Blythe Gaissertt and bass Kenneth Overton to be consummate artists. But standing in front of the Chorale, singing Mozart, they seemed to reach new levels of accomplishment. Overton’s booming bass was truly profound and Gaissertt’s crystal clear, elegant singing navigated the difficult passages with great aplomb.  I wasn’t familiar with tenor Daniel Curran or soprano Elizabeth de Trejo, but they are singers to be reckoned with, especially de Trejo, whose performance of  the ¨Laudate” from Mozart’s Vesperai solennes de confessore was a highlight of the first act. In fact, that piece was such a tour de force that the audience, who had been correctly silent between movements, burst into spontaneous applause; they simply couldn’t stop themselves.

As I listened to movement after movement, I was pleased that my scholarly knowledge of the piece evaporated into the ether as the music swept over me. In the end, it didn’t matter who wrote what, when they wrote it, or what kind of paper it was written on; the music, as it exists, is a gift to humanity. 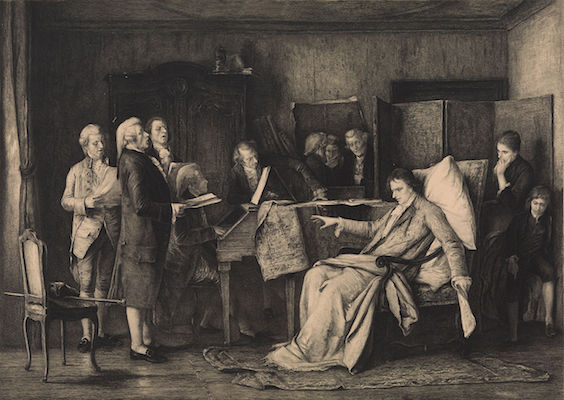