Each year, the editors of Merriam-Webster’s Dictionary select a “word of the year” based on the frequency with which users search for it on their website. They recently announced the 2016 word of the year to be “surreal,” which narrowly beat out “fascism.” The winning term — especially considered alongside its runner-up — seems a fitting descriptor for a year so full of unsettling geopolitical, cultural, and environmental surprises. So we are told, at least. Since 9/11 the popular use of the word “surreal” has become a shorthand way to describe events that overwhelm our very sense of the real. Surreal, in this sense, is the new sublime. A fashion trend in language, perhaps — no less than the emojis and vapes and selfies and hashtags that exploded into common US English in years prior to 2016. Even so, it seems more than a little discomfiting that a word used to describe events “marked by the intense irrational reality of a dream” has become so familiar.

“Surreal,” the dictionary’s website explains, “is often looked up spontaneously in moments of both tragedy and surprise.” The editors noted significant spikes in searches for “surreal” after the terror attacks in Brussels in March, and after both the attempted coup in Turkey and the terror attacks in Nice in July. Donald Trump’s presidential victory in November sealed the deal: “Surrealism Trumps Fascism,” claims a headline for the Guardian, as if binding all three terms in a world-historical syllogism.

Like fascism, the word “surreal” has a history. And these histories are virtually contemporary with one another: “fascism” was coined by Benito Mussolini in 1919 to describe his fascio or “bundle” of anticommunist male followers. The term was later taken up to describe authoritarian right-wing nationalism more broadly. Surrealism is a marginally older word, coined by the French poet Guillaume Apollinaire in 1917 to describe Erik Satie’s and Jean Cocteau’s WWI-era ballet Parade, with its scenes of daily street life heightened by wacky noisemaking instruments and Picasso’s cubist costumes. “Surrealism” was later taken up permanently by a group of young Parisian poets, who adopted it as the name for a new poetic movement in the early 1920s. One of the principal experimental movements of the twentieth century, Surrealism grew from a Paris-centered group of poets and artists to a broadly international intellectual phenomenon, gaining adherents and fellow-travelers throughout the world from the 1920s through the late 1960s and beyond. The surrealists were committed, moreover, to political activism, entering the political fray from the very opposite end of the political spectrum as those named in the runner-up word of 2016. The surrealists were fiercely dedicated to left-wing politics and were no less fiercely antifascist; they supported the fight against European colonialism and briefly joined the Communist Party in the 1920s before breaking with its Stalin-era orthodoxy.

The surrealists, curiously enough, tended not to use the word “surreal” all that much. For the surreal was not generally something one could point to as a descriptor of the world. To the extent that surrealism concerned the irrational and the life of the unconscious mind — as Merriam-Webster’s tells us — it did so in the form of an artistic and spiritual resistance to the world of terror and tragedy that so often overwhelms us with its flight from reason. As the French poet André Breton puts it in his 1924 Manifesto, surrealism “asserts our complete nonconformism clearly enough so that there can be no question of translating it, at the trial of the real world, as evidence for the defense.” The aim of surrealism was not simply to describe the outlandishness of the real world or the dreamlike quality of terrible catastrophes. Its aim was instead to arm our minds against the political forces that perpetuated such catastrophes as if they were inescapable parts of reality, as if they were everyday occurrences. And they have become, indeed, everyday occurrences.

“We live,” Breton wrote, “in open conflict with the immediate world that surrounds us.” Speaking at a public lecture in Prague in April 1935, Breton describes a world on the brink of war. He was painfully aware not only of Hitler’s recent declaration of German rearmament — in defiance of the Treaty of Versailles — but of his own nation’s susceptibility to fascism as well: the previous year had seen violent right-wing demonstrations in Paris and the near overthrow of the French Third Republic. He was also aware, no less painfully, of the murderous consequences of Stalinism in the Soviet Union. He thus summarizes a bleak position for the contemporary witness: “A gaping wound opens before our eyes: we are witnesses of the fact that great evil continues to be perpetuated.” And continue it would.

The language Breton uses in 1935 to describe the contemporary world rings startlingly true today.  From the vantage point of the surrealists, the world of 1935 was an “ultrasophisticated world,” he writes, “a world which, no matter what aspect of it is put to the question, proves in the face of free thought to be without an alibi.”  It was, in short, a world definable in terms of crime rather than reason. It was a world that, in fact, seemed engineered to defy reason. “In whatever direction I turn,” he continues, “there is in the functioning of this world the same appearance of cold and hostile irrationality […] It is a matter of all intellectual values being persecuted, all moral ideas falling to pieces, all the benefits of life being condemned to corruption and becoming indiscernible.”

But this was not Breton’s definition of “surreal.” This was the world that the surrealists sought to challenge, to resist, to redefine, and to inhabit anew. We might think instead of Breton’s words as alluding to the condition named by a different dictionary, the Oxford English Dictionary, in its 2016 word of the year: “post-truth.” This term describes precisely what “proves in the face of free thought to be without an alibi,” as Breton put it.  Surrealism (and it’s interesting to note that “ism” was Merriam-Webster’s word of the year last year, in 2015) engineered new ways of thinking — of writing, of making art, of living — that could help us fight back against the seemingly unthinkable events and atrocities that might otherwise stand uncontested as reality. Through experiments in poetry and art that could be carried out by virtually anyone, surrealism produced “miraculous weapons” for renovating the way we think, for wresting reality away from the clutches of a bundle of angry men. Create a poem — or a picture — with scissors and a newspaper; record the unruly tangle of your thoughts in their “disinterested play.” Or as Breton suggests: Put your trust in the inexhaustible nature of the murmur. In the words of the great Martiniquan poet Aimé Césaire, surrealism was “a weapon that exploded the French language.”

It is a weapon that we can use to resist the destinies to which we might otherwise be condemned to suffer, whether in the ruins of a war-torn city or in the slow-motion shock of an impending collision. The surreal is not a way to describe such disasters, however irrational or dreamlike; it is a means for refusing their hold upon our minds, our morals, and for giving us courage to fight against any reality that would seek to control our desires and fears by means of them. In the words of Tchicaya U Tam’si, the Congolese surrealist poet and journalist: 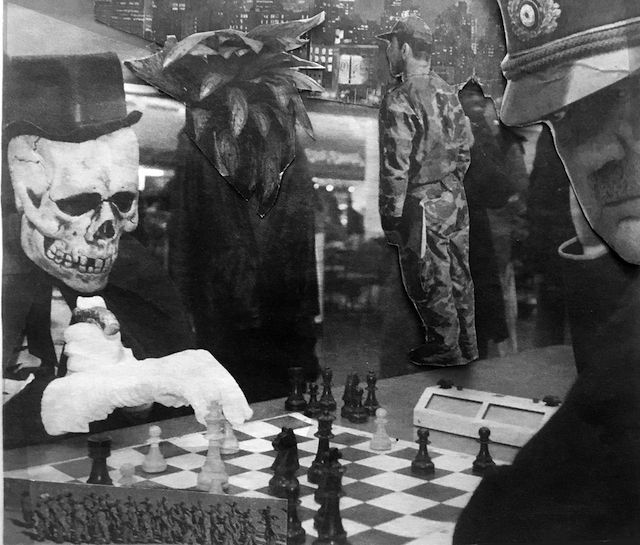