Anyone who has guiltily caught themselves wondering if pandemics are a bit like natural periodic fires is not alone. The devastation caused by human-driven climate change and the novel coronavirus together have revived outworn and discriminatory ideas about population. In November of 2020, The New Scientist reported readers suggesting that in the face of environmental crisis (including the incursions into wilderness increasing our vulnerability to zoonotic diseases), we should collectively be addressing “the elephant in the room” — in other words, we must face the uncomfortable truth that there are simply too many of us: we are using up more resources than the planet can safely supply and paying the price for it; nature, in its tooth-and-claw indifference to individual suffering, is restoring the balance by killing a good number of us off. Given how tempting it is to bury our own culpability in speculations about nature’s greater wisdom, we cannot remind ourselves too often that one of the highest risk factors for severe illness and death from COVID-19 is poverty.

The idea that we can solve our problems by lowering our numbers resurrects a debate that began more than two centuries ago. In An Essay on the Principle of Population (1798), Thomas Malthus challenged the utopianism of Enlightenment thinkers such as William Godwin and Nicolas de Condorcet by arguing that population growth, which increases exponentially, will always outrun food supply until eventually it is checked by disease, famine, war, and other calamities. Widespread suffering among the poor, he insisted, was therefore not only inevitable but necessary. Moreover, public measures designed to alleviate such suffering only interfered with the natural corrections to population growth that ensured overall prosperity. In his revised 1803 editions of the work, he added that the indigent should be instructed to marry late to avoid overbreeding; if they ignored such advice then they should be blamed for their own misery. (This was incidentally an attitude mocked 74 years earlier by Jonathan Swift in his satirical proposal that the excessively fertile Irish poor should sell their children to the English as food.)

Aside from recent science-based projections that the human population is likely to fall over the course of the next century, what popular neo-Malthusianism chiefly ignores is global inequality. It is overconsumption in wealthy countries and carbon-greedy industry — whose profits are reaped by multinational corporations — not raw population density that leaves the biggest footprint and drives increasing interspecies contact. And yet for every YouTube video showing how the emissions linked to the voracious consumerism and wasteful habits of global northerners vastly outpace those of more densely populated regions in the Global South, there is comment after comment insisting that we are too many and that eventually nature will simply take her own course.

Malthusian ideas originated in an era of industrial revolution and empire building that seeded the problems of global inequality we now face. The modern analysis of how wealth is produced and distributed began, of course, with Adam Smith who is often erroneously described as the “father of modern capitalism.” However, that dubious honor belongs more properly to his younger contemporary, Malthus, who was himself a major influence on Charles Darwin.

Malthus’s premise that any society’s flourishing depends upon the natural, regular culling of its weakest members did not become a lasting principle of political economy, but it took root nevertheless in evolutionary science where it became the key to Darwin’s theory of natural selection — namely, organisms whose traits give them an advantage in an environment will pass those traits down to their descendants, while organisms without such advantage will die before they reproduce. In a spirit even closer to Malthus, Darwin’s fellow evolutionist Herbert Spencer subsequently coined the phrase “survival of the fittest,” a cornerstone principle of laissez-faire capitalism, to explain how human societies grow and change. At the intersection of Malthusian economics and evolutionary theory, an essentially competitive human nature explains and justifies everything from jealous and acquisitive behavior to technological progress and unavoidable social inequality.

In Victorian Britain, such ideas were countered by those who railed against industry’s exploitation of the poor and who described the tentacular reach of market capitalism across the earth and into the unhappy lives of the millions who suffered so that the few could profit. Charles Dickens’s depictions of characters morally disfigured by the greed and cruelty characteristic of mid-century urban life are a good example of such protest. The social problem novels of Charlotte Brontë, Elizabeth Gaskell, Benjamin Disraeli, and Charles Kingsley provide others.

But a very different kind of writing, revolutionary rather than reformist, and boldly turning away from social realism to the older genre of utopian romance, tackled these problems in another way. William Morris — author, artist, textile designer, bookmaker, environmentalist, and socialist organizer — believed that the creation and enjoyment of pre-industrial arts and crafts could undo the assumptions about natural inequality that were baked into capitalism. Influenced by both Karl Marx and John Ruskin, he demanded that works of art should actually embody the equality and freedom that had disappeared in an age witnessing the rise of mass production and excessive consumption on the one hand and widespread poverty and drudgery on the other. In News from Nowhere — his novel-length description of an egalitarian, anti-consumerist society — he aimed at nothing less than rewiring his readers’ minds and hearts.

News from Nowhere imagines a world two centuries into the future in which the miseries of the 19th century are all but forgotten. A few relics — usually old books preserved by eccentric antiquarians — draw a picture of that past. They tell a story of crippling poverty, brutal conditions for industrial labor including low wages, long workdays, urban pollution, poor public health, and a vast and unbridgeable wealth gap. Most of the lucky inhabitants of Morris’s future London, however, simply take for granted the delights of what has become an entirely pastoral lifestyle. They have leisure to enjoy nature’s beauties, while contentedly engaging in just the right amount of healthy cooperative work outdoors or laboring happily over exquisitely decorated, hand-made objects which they give away freely to those who need them. They also enjoy remarkable longevity thanks to good food and an abundance of clean air and water. William Guest, the narrating visitor from the 19th century (and a thinly veiled stand-in for Morris himself), is the pivot between these worlds. While it seems at first like an impossible fantasy of return to an idealized medieval England, the story is less interested in depicting either the past or the future than in helping readers to recognize and reject the toxic Malthusianism of the Victorian present.

Admittedly, there are no direct references to population theory or even to Darwinism in the story. But the fact that there is no scarcity in Nowhere, and no scarcity because there is no greed, is a clue that Morris wrote the novel as a challenge to Malthusian evolutionism. For Morris, societies do not evolve out of deep evolutionary time, improving as they gradually eliminate their weaker constituents and sustained by the natural inequalities among their members. Nor are human beings fundamentally and naturally in competition with one another. Rather, he concurred with Marx, what we call human nature is simply the sum of the various circumstances that human beings themselves help to create and that in turn shape their lives — or what Marx called “the ensemble of social relations in the present.”

News from Nowhere departs from an earlier tradition in utopian socialism represented in the schemes of Henri de Saint-Simon, Charles Fourier, and Robert Owen. Their utopian designs were based in a science of human nature to which they believed a planned community needed to be responsive if it was to produce social harmony and equality. The denizens of Nowhere, on the other hand, are good because they are the descendants of socialist revolutionaries. The whole reason they care about the happiness of their fellows, are sensitive to the “skin and surface of the earth on which man dwells,” have no interest in accumulating wealth, and put great value on the beauty of the objects they carefully craft is that they and their ancestors have built a new world free of the slavery and corrupting wealth gap of “the commercial system.” For Morris, as for Marx, that system was one of alienation where human beings have lost not only their sensuous relationship to the products of their own labor but the very capacity to shape their own lives and their relationships with others. The unalienated Nowhereans have replaced what their historian describes contemptuously as the “competitive spur to exertion” with an instinct for beauty and an impulse to share all that they enjoy.

The goal of the novel is to pass this along to its audience who must learn to read in a new way. For as one might expect, News from Nowhere is a little thin on plot: aside from a lengthy account of the revolutionary founding of Nowhere, the story consists mostly of a conflict-free journey up the Thames with a group of elegant and morally flawless Nowhereans. Yet it is the very lack of struggle and conflict that for Morris makes the story artistic in the true sense — something that can be produced, shared, and enjoyed in a world endeavoring to rid itself of class discrimination and suffering. He believed that such art, because it was unalienated, could actively undo the devastating psychological effects of capitalism and thereby help human beings transform the oppressive conditions under which they lived.

Guest arrives in Nowhere in the year 2102. Scramble the digits and he would have landed instead in 2021 where of course in the real world his vision remains as utopian as ever, and where we can add to the alienation of wage labor and enormous social inequality the uncertain future of work in developed countries, the many ways that technology-hungry nations remain vectors of harm for poorer ones, globally uneven access to the COVID vaccine, and wide-scale climate-change injustice. What Morris reminds us, just as he reminded his 19th-century audience, is that these terrible inequities are neither natural nor inexorable. Imagining a perfect world in which we are transformed by art might seem trivial in the teeth of the massive problems we face. But In contrast to dystopian fantasies of population reduction, Morris’s utopia suggests that through the shared appreciation of well-made things we may learn to relinquish the pleasures that bind us to others’ suffering. 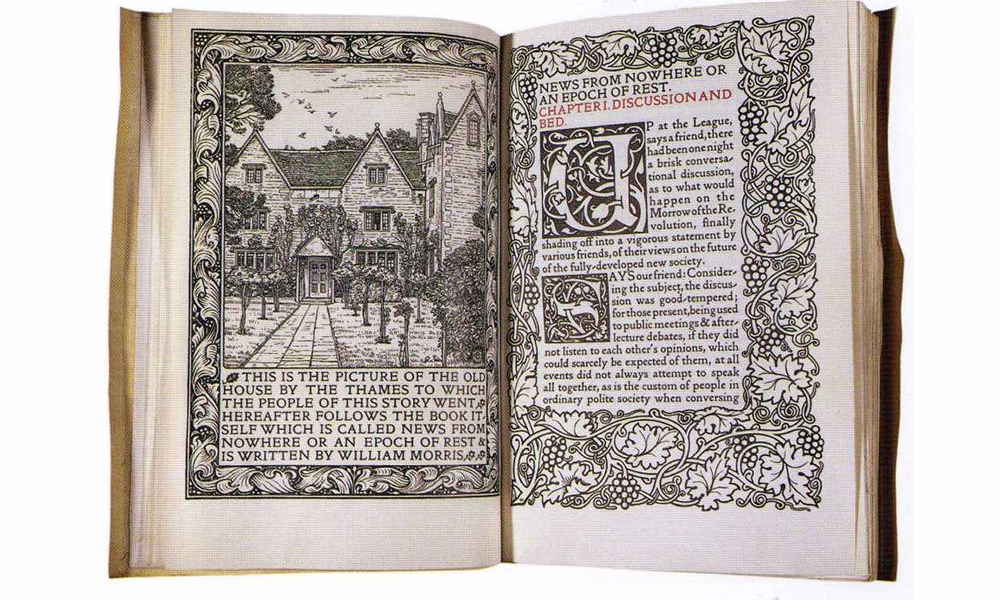