A friend of mine masochistically watches the DNC video of Hillary Clinton shattering the glass ceiling after the succession of male presidents. It hurts to watch because it reminds us of what this past Friday might have been. Ever since Hillary Clinton lost the election, nobody talks much about her. There is justifiable, growing anxiety about how a Trump presidency will affect women, and how it is empowering misogyny. But already, Hillary’s disappearance from the public eye has cost us a desperately needed and fragile narrative of ultimate feminine achievement.

I wept when I heard Hillary Clinton concede, for the same reason I voted for her in the primary without agreeing with all her political positions or thinking she was the perfect candidate. I was with her because I wanted to see the first female president. Another male president, even if greater than all the men already on Mount Rushmore, would not do. I was ready for female leadership.

Hillary was shrewd enough to understand that many of us were voting for her because she was a woman. She harnessed that power. She spoke about little girls and their futures. She spoke about paying attention to details, the very thing feminine ethics is built upon. One of my favorite lines from her presidential run came at the DNC convention when she praised her own deep interest in the “details of policy.” “Because it’s not just a detail if it’s your kid, if it’s your family,” she soared, citing levels of lead in the drinking water and the price of prescription drugs. Perhaps these were prosaic details, but any mother terrified for the safety of her vulnerable little beings knows that a stupid detail can make your child sick.

Throughout the 2016 campaign, countless people spoke of how Hillary cared about the intimate details of their lives. As a female presidential candidate, she brought a new level of empathy and emotional depth to the political public discourse. But these kinds of stories do not make for the best political theater and fell by the wayside, like out of sync footnotes. Not always comfortable on stage, Hillary touted her own accomplishments as an experienced doer behind the scenes. What we heard, and what Hillary seemed almost apologetic about, was that she was not a charismatic leader that could rouse a crowd. Hillary always praised her closest male allies, former Presidents Bill Clinton and Barack Obama, as fantastic orators. What she omitted in her praise was that although women might offer unique and equally valuable skills in their approach to politics, when we step into the limelight, we are judged exclusively through male indexes, like charisma and oratorical skills.

As a college professor, I am particularly aware of how oratorical powers are privileged in our society. I have been in higher education for close to a decade, but standing in front of students as the only authority figure still remains a major and deeply significant event for me. I have noticed that over the years I have become better at it, but underneath it all, I do not relish being the lone voice in a room. I enjoy dialogue, the fluid exchange of ideas when we all talk together. Over the years, many female colleagues and mentors have shared their own persisting apprehension about classroom performance despite decades of practice. They always note the upside of apprehension as what motivated them to prepare more thoroughly. In turn, my own distaste for monologues makes me a better listener and averse to hierarchical models. But are such benefits as visible or as rewarded?

Hearing Hillary speak, I could empathize with her focus on the real work of governing and ambivalence for its performative aspects. The thought she might actually win meant that finally the strengths of this quieter model of leadership would get recognized. To see America love Hillary Clinton in all her unabashed, uncharismatic imperfection, was exactly what I needed. On election day, I put on a makeshift pantsuit and hoped my country was also ready for this new kind of leadership. Now it hurts to remember everyone’s Facebook posts about “smashing the patriarchy.” The patriarchy runs deeper than anyone thinks. And with Hillary’s loss, we did not just lose an election, the women of America lost a narrative we have been cobbling together since the Second Wave Feminist Movement began.

In her campaign Hillary emphasized making America whole, hearkening to the inclusiveness that also defines the incredible, intersectional feminist manifesto of the Women’s March from this past weekend. To many, she seemed like the compromise candidate, bruised by a lifetime in the public eye. But her narrative of wholeness told of the impossible ambition of women whose empathy and desire to recognize the rights and privileges of everyone is considered wishy-washy and unlikable. Obviously making America great again sounds so much sexier than making America whole again, doesn’t it?

Like progress itself, “make America whole” is diffuse and inchoate.  Just like narratives of ultimate female achievement. Like Hillary, I’m thinking about little girls right now too. As a scholar of literature and a lover of great books, I have to admit that satisfying narratives about women’s lives are incredibly scarce. Women fall in love and flourish in the personal sphere, but we hardly ever see models of ultimate achievement that end with being called Madame President. And forget about trying to do both at the same time. Some of the greatest works of world literature are deeply gender-segregated: women get the adultery and courtship plots, which situate them in the home, while men have the Bildungsroman — the genre of accomplishment and travels.

My favorite novel, which I teach often, is Leo Tolstoy’s Anna Karenina. Here is a book about a woman who ends up under a train because she dares ask too much. She is shunned by her society for having an affair, while her male lover can attend the opera in full dignity. Surely Anna can get a divorce, insist my 21st-century students. Nowadays Anna could, in fact, get a divorce. But the real dilemma of the novel is larger than her marital status — it revolves around the more elusive question of what allows a person, a woman, to feel whole. Anna’s challenge is that she cannot simultaneously have adequate social standing and personal satisfaction in the realms of both motherhood and marriage. Unsurprisingly, the successful reconciliation of all these spheres remains a challenge for women today. The implication in Anna Karenina is that only empathy in the form of ultimate inclusiveness can facilitate the wholeness Anna and others seek. Anna never receives this empathy in her increasing social isolation, but must repeatedly renounce pieces of herself until her final suicide.

Hillary Clinton was groping in the dark for a new kind of narrative, looking to forge a model of wholeness in politics, a feminine model of ambition. She brought emotional gravitas to politics with her message. She was speaking like a mother — and it meant that for the first time we would have a commander in chief who had experienced birth, and who might, perhaps, have a different outlook on sending people to their deaths. Napoleon Bonaparte the great soaring hero of the European Bindungsroman advanced his career with no such thoughts of wholeness. Napoleon never had to wear a pantsuit, or Spanx. He probably did not pay attention to details like making sure the kids were well-fed and in clean diapers. He was in the business of conquering, a single-minded devotion few women want or could ever muster. Such narratives of unabashed ambition have shaped Western history and culture — and they look like simple tales of linear upward trajectories. We don’t have narratives of female ambition on the same scale. Female ambition does not look the same way; our bodies and our selves do not look the same way. Donald Trump insisted that Hillary lacked the presidential look as defined by the white men on Mount Rushmore. He placed her as somewhere between the “devil,” “not all there,” following a patriarchal tradition where extreme essentialized selves usurp and destroy women’s true selves.

How many of us have been told that we do not look the part, even though we have quietly memorized the part. In higher education, studies show that men often score better than women in student evaluations, even if the course is online, and the “male” professor is actually a woman. Surely many female professors have delighted in getting “hey” or “Mrs” as a salutation instead of Dr. or Prof. (“Mrs” has the regressive edge of putting us right back in the courtship plot.) And how much of this bias is also sadly internalized. When I first started out teaching at my university, there was a retired older gentleman that would sit in on my classes because he loved Russian literature. It was incredible to see someone seeking to be a lifelong student. And yet the first semester he came to my Tolstoy class, I was terrified, even though he was mild-mannered and hardly ever spoke. As a young assistant professor I was nursing my own case of impostor syndrome, but it is interesting that it played out as internalized sexism — he had the professorial look, I didn’t. Maybe I had the knowledge, but he had the look. Hillary didn’t have the look either.

For Hillary, wholeness meant she had to be everything and do everything. And it was still not enough. She was penalized for not being delighted enough by the performance of politics. Hillary wanted to make America whole again, but like many of us she was stuck in the desperate chase of elusive wholeness for herself, frenetically balancing all the pieces — all the roles, all the selves, without dropping the ball. No wonder she looks so exhausted and defeated these days. Donald Trump, on the other hand, could do whatever he damn pleased and still win. Not only could a woman not reach the highest office, but the experiences of many women at the (small) hands of Donald Trump obviously were not enough to thwart his ascent to the presidency.

And in case you’re wondering, that’s what sexism looks like. Watching her lose this election reminded me of the ending of Anna Karenina. Almost always, it’s the woman that ends up under the train, because there’s a man writing her story who can’t or won’t save her. So can we please write some new, real stories for our daughters? 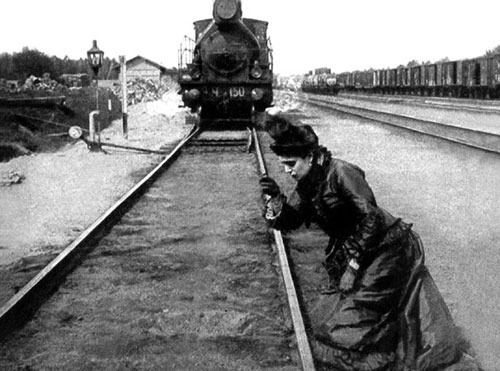