Before he was assassinated on the streets of Stockholm in 1986, Swedish Social Democratic Prime Minister Olof Palme would often wear a button on the lapel of his jacket that read, “Keep your hands off my friend.” The button, in the shape of a hand, was a response to localized violence against refugees who had sought asylum in Sweden.

Palme, who was Prime Minster in the 1970s and ’80s, insisted that if Sweden were a “peoples’ home,” based on cooperation and equality, then it would be a violation of socialist values for Swedes to turn their backs on desperate “foreigners.” In and out of office, Palme reached out to “third-world” countries, reminding Swedes and anyone else who would listen, that the fate of the industrialized “North,” was linked to economic development and fairness in the developing “South.”

On September 9, the results of the Swedish general elections indicated that Europe’s growing right-wing populism has established a solid political base in Sweden as well. While the anti-immigrant party Sweden Democrats did not perform as well as some feared, their 17.6% of the vote was a significant increase over the 12.9 % they received in 2014, making them Sweden’s third largest party.

Sweden, which took in substantial numbers of Vietnamese refugees in the 1970s — as Prime Minister from 1969 through 1976 Palme was an ardent opponent of the United States war in Vietnam — also opened its doors in 2015 during the European migrant crisis and took in 165,000 people, a high number measured against its population. The Sweden Democrats — whose party slogan is “Keep Sweden Swedish” — have taken advantage of resulting social tensions, basing their national campaign on crime and immigration as a threat to the welfare state and Swedish identity.

As journalist John Judis has pointed out in his survey of rise of right-wing movements throughout Europe, in the post-war period from roughly 1945 through the mid ’70s, a number of countries actively recruited immigrants to satisfy labor shortages. Those shortages eventually turned into surpluses as capitalism’s post-war economic boom slowed. Today, a large percentage of Swedish immigrants suffer from unemployment and geographic isolation. The Swedish right wing claims that immigrant gangs now control “no-go” areas in cities and that the police refuse to patrol them.

The populist right throughout Europe, including other Nordic countries, have made political gains that in many cases have come at the political expense of Social Democratic parties by eating away at their traditional working-class electoral constituencies. The anti-immigrant Norwegian Progress Party, for instance, has grown from 3.5 percent support in 1985 to 15.2% in 2017 and is part of the coalition government currently in power. But Sweden, which was influenced by the Enlightenment and had a unique industrial development where the working-class was highly organized early on, was always seen as a bulwark against the nastier impulses societies are prone to.

In the United States, conservatives have always used Sweden as a political whipping boy. Sweden is tightly controlled, repressed and despite its economic security, unhappy. So goes the tendentious argument. Angst-ridden Ingmar Bergman movies of the 1950s and ’60s didn’t help dispel this cliché, nor did President Dwight Eisenhower. In an attempt to help his Vice-President Richard Nixon win the presidency against John F. Kennedy, Eisenhower told a gathering of Republicans in 1960 that a vote for Kennedy would be a vote for Swedish style “paternalism,” “drunkenness,” and “suicide.”

While Eisenhower’s facts were wrong — the suicide rate in Sweden was relatively high long before the Social Democrats were in power — the picture of socialists as naïve about human nature and crypto-authoritarians resonated with American conservatives fighting any attempt by Democrats who favored even a minimal role for government in the economy. This, despite Sweden’s social achievements of universal healthcare, paid parental leave for mother and father, free pre-school and higher education, and protection of worker’s rights and unionization.

Conservative attacks on Sweden have not changed. President Trump has lambasted Sweden for taking in refugees, adding that “what Sweden has done to themselves [sic] is very sad…” Trump softened his rhetoric when he met the Swedish Social Democratic Prime Minister Stefan Lofven at the White House last March, but insisted that he “was right” about blaming immigrants for what he alleged was a rise in crime rates in Sweden.

While the Sweden Democrats did not gain enough parliamentary seats to carry out their policies, they want to influence larger center-right parties to build their version of a political wall that will keep immigrants out. Prime Minister Lofven knows that the immigration rates of 2015 may not be sustainable for a country of only 10 million people but understands that integration is the crucial issue.

More importantly, narrowing the political debate to immigration overlooks how broader reforms of the economy might alleviate problems of people struggling to survive who may be easy prey for simple and noxious political “solutions.”

Two years before Ronald Reagan was elected President, democratic socialist Michael Harrington, who was a friend of Olof Palmes’s, looked at the global political landscape and found glimmers of hope in Sweden. The post-war economic growth that funded generous welfare states was running out steam but Social Democrats, Harrington said, were “rediscovering ideology” and exploring bold ideas.

The Swedish socialists, through the so-called “Meidner Plan,” were proposing a tax on corporate profits in the form of stock that would be paid into worker controlled investment funds. Swedish economist Rudolf Meidner and the strong blue-collar labor federation knew that labor’s share of income was declining — as it still is today — and offered an innovative proposal to advance collective stock ownership while at the same time moving towards workers’ control of the enterprise without the traditional socialist policy of nationalizing industry. It was a rebirth of “practical idealism,” rooted in values and programs that could have a concrete impact on regular people’s lives.

According to Donald Sassoon in his book One Hundred Years of Socialism, employers and the non-socialist parties turned against the proposal and convinced many voters that such a “radical” proposal would engender a stock market crash and a flight of capital out of Sweden.

For those who wanted “real” socialism, whatever that might mean, the watered down version of what the Meidner plan had become by 1982 when Palme and his party returned to power, was a betrayal. Academics and activists attacked the Social Democrats and Palme from the left as timid and “bourgeois.” Palme, who was not intimidated by red-hot student radicals, defended social democracy’s piecemeal reform. He pointed out that it was much easier to tear down a society, as some self-styled “revolutionaries” advocated, than to build one up. He was proud of the accomplishments of Swedish socialism and believed the “mere reforms” that hard-core leftists sneered at and the right wing bitterly opposed, provided dignity and security for millions of people.

Embracing democracy and acknowledging that the majority of people were not “proletarians,” as doctrinaire Marxists would have it, merely reflected changes in Sweden and other developed societies. Two unambiguously polarized classes would not meet each other on opposite sides of the barricades and identities other than class would continue to determine political loyalties.

While the “transition to socialism” was never really tried, progressive Swedes showed that innovative ideas about how to reign in the worst excesses of capitalism were not limited to a vibrant welfare state. In its original form, the Meidner plan struck at the essence of capitalist power — the ownership of capital, wage labor, profits and investment decisions. It is not surprising then, that it was difficult to implement.

Reports after the September election indicated that many voters in Sweden felt that the Social Democrats only offered “tinkering” with public policy and that despite the reactionary ideas of the Sweden Democrats, at least they were talking about “real issues.” This will sound familiar to American ears. In times of strife, darkness can be more attractive than light — fear and blame much easier to assimilate than a complex policy agenda.

Palme, who was educated in the United States at Kenyon College, was a visionary and a practicing political leader. In the global battle of ideas he believed that we would either live together in peace or live apart in fear and violence.

Not long before he was shot while walking with his wife after leaving a movie theater — in a typically Swedish way without a retinue of bodyguards — Palme told a political rally that economic and political democracy must be “conquered anew” in every generation. His boldness is needed again, to save both Swedish social democracy, and us as well.

Header image: Olof Palme with hand button in his lapel. 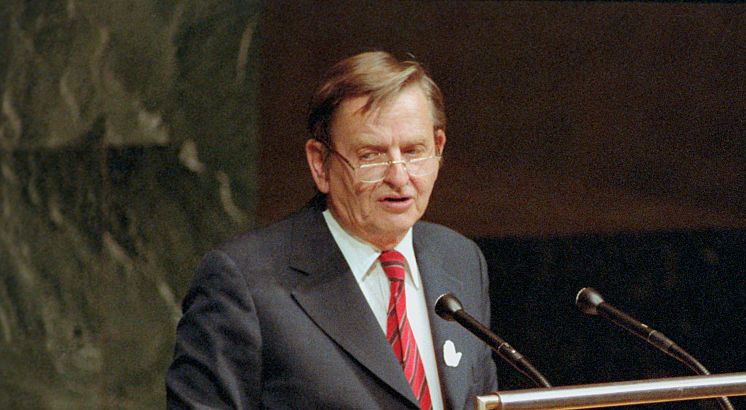