The 100 men and women who serve in what was once known as the “world’s greatest deliberative body” basically spent the past two weeks deciding whether or not to hold a trial to remove Donald Trump from office.

Two-thirds of the Senate was never going to vote to remove Trump from office. But when 51 Republican senators (or 53, depending on the resolution) voted last week against even hearing from witnesses or reviewing documents, they effectively cancelled the trial before it started.

And when they vote later this week to keep Trump in office despite his obvious abuse of power and obstruction of Congress, it will be the culmination of a months-long process that saw them follow the usual script for when his latest misdeed surfaces: “He didn’t do it, how dare you suggest he did, but it would be totally cool if he had, which of course he did so get over it, everybody does it, and we’re going to prosecute Joe Biden for doing it!”
Democrats rightly pursued impeachment to defend the Constitution and rule of law. But they also did it to force Republicans to reveal themselves as complicit in Trump’s corruption and criminality.

Nancy Pelosi maneuvered the GOP and vulnerable senators up for re-election into casting unpopular votes that will come back to haunt them as more evidence of Trump’s manifest unfitness comes to light.

Votes that also delegitimized and discredited the preordained outcome, depriving Trump of the acquittal he craves. An acquittal he will still claim, but since Pelosi and Adam Schiff won the framing war decisive majorities of Americans will give no credence to.

Polls show 70-80% of voters, including a majority of Republicans, wanted Senators to conduct a real trial with actual evidence.

52% believe Trump abused the power of his office by extorting Ukraine to investigate the Bidens. Only 41% disagree.

On obstruction of Congress the numbers are even worse: 53% of Americans say he did, versus only 37% who say he didn’t.

And roughly half of the country thinks he should be removed from office — something that’s never happened in the nearly a quarter of a millennium since the Constitution was ratified.

Given that the Republicans were never going to vote to remove Trump, it’s the best possible outcome for Democrats that they went all-in on a cover-up.

The breathtaking scope and depravity of Trump’s corruption and lawlessness, which they have now signed off on, will come out. Bolton will talk and his book will be published. Lev Parnas is a wild-card with iCloud accounts full of incriminating information. Trump’s taxes and financial records will be released. His former White House Counsel Don McGahn will testify under oath as the House continues to investigate the president. And in a story that’s been flying under the radar, Senate investigators are interviewing an IRS whistleblower alleging improper political interference in the audit of Trump’s or Pence’s taxes.

POLLS POLLS POLLS Tonight — finally, and hopefully for the last time — Democrats will kick-off voting season in the first-in-the-nation Iowa caucuses. A party that champions expanding voters’ access to the ballot box and fights GOP voter suppression should finally eliminate confusing, time-consuming, and unrepresentative caucuses from its presidential selection process.

Iowa is an especially unrepresentative state. It’s more rural and a lot whiter than the national averages. Its racial disparity is made even worse, THE WASHINGTON POST reports, because it has a lifetime voting ban on anyone ever convicted of a felony.

While Iowa is only 4% black, 26% of its prison population is. Making matters worse, caucuses are limited to registered voters, and last year, the Des Moines Register reported the state’s database of more than 69,000 felons barred from voting contained systemic inaccuracies officials have ignored for years.

I have no idea who’s going to win on the February 3 caucus. The outcome is especially uncertain this year because the impeachment trial sucked up so much oxygen and kept three of the top five candidates off the campaign trail. And because the most widely-watched poll in the state was withdrawn after the Buttigieg campaign complained his name had been left off at least one survey.

Nate Silver tweeted Monday that “Sanders has emerged with a slightly clearer lead over Biden… Still think people are underestimating the uncertainty a bit and neither a Buttigieg or Warren win would be at all shocking.” Here are his final Iowa polling averages:

Iowa’s caucuses have a complicated voting system. Candidates who don’t get the support of 15% of voters in the first round of caucusing are eliminated. Their supporters can then realign with other candidates, or go home. Silver expects the result on the first ballot will be close to the polling averages.

But in the second round he expects Biden to do a little better and Bernie a little worse. Either way, he expects the spread between them to be less than three points, which would basically be a tie since it would result in them both getting about the same number of convention delegates.

Ron Brownstein reports in THE ATLANTIC that Biden’s camp is pulling for a Bernie win if the former VP doesn’t come out on top himself. Senior Biden advisers “believe Sanders has a ceiling on his support that will impede his ability to clinch the nomination. They believe that a victory for Warren, Buttigieg, or Klobuchar would pose a greater threat — a win for the latter two would also represent a meteor strike on the moderate voters Biden is relying upon.”

THE ECONOMIST Who will be Donald Trump’s most forceful foe? Data suggest that one Democratic candidate would do better than others against the president in November. G. Elliott Morris did a deep dive into the political science literature and polling data and found that a moderate Democrat with strength among working-class whites has the best chance to beat Trump. As he summarized his conclusions in a tweet: “[I]f Democrats want to win in 2020, Biden will boost their chances. But he’s an imperfect candidate who leaves *A LOT* to be desired.”

Nominating moderates improves both parties’ chances of doing better, both down-ballot and in presidential races. Why?

First, moderates have advantages in both persuasion and mobilization. This goes against the conventional wisdom that ideological nominees “fire up” the base. That’s true, Morris writes. But they fire up the other side’s even more. Since Trump will fire up Democrats, it’s not clear how much more a more ideological nominee can energize the party.

Second, candidates who appeal both to “racially resentful” and anti-immigrant whites and to non-white voters will have an advantage this year. Biden’s support among black Democrats, at least those over the age of 30, is overwhelming. And he does nearly 30 points better among “racially resentful” whites than the other candidates. (That phrase “racially resentful” is quite a euphemism, but apparently it’s the term used in the literature.)

Third, Trump got a lot of support in 2016, especially in close states, from low-income and non-college white voters who liked how he campaigned against elites. Sanders would do better among these voters than Biden, Morris writes. But his more ideological orientation would cost him more overall.

And finally, polling reveals — shockingly — that American voters see all of the major Democratic candidates except for Biden as more ideologically extreme than Donald Trump. You read that right. 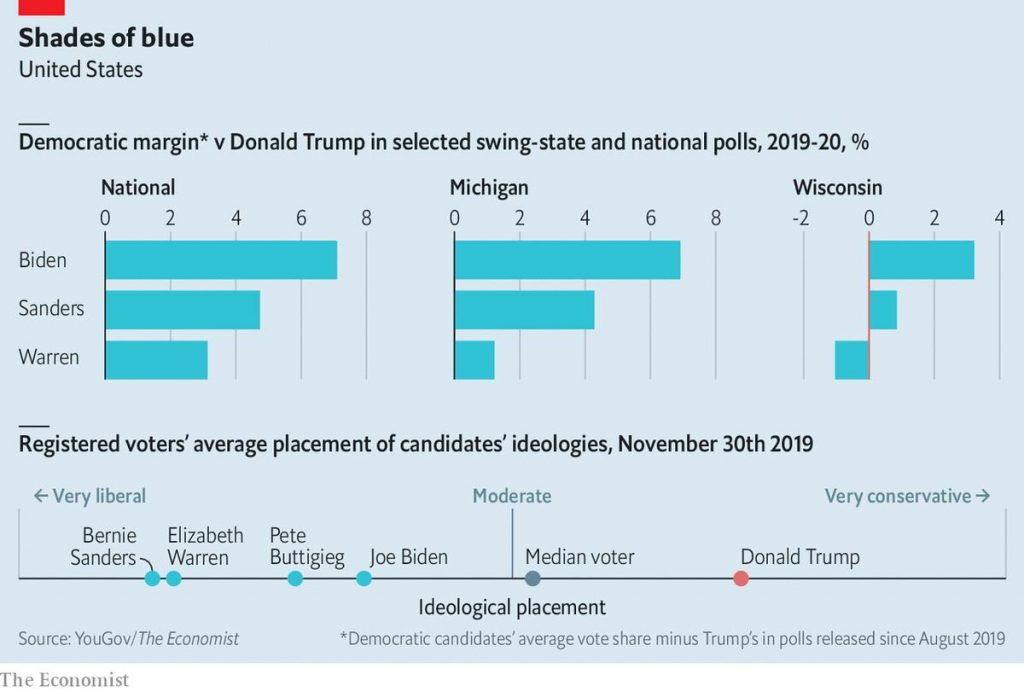 And believe it or not, voters in 2016 saw Hillary as more ideologically extreme than Trump. It’s a little less shocking when you consider Hillary’s decades of demonization by the right. And when you recall that Trump ran in 2016 on preserving and strengthening Social Security and Medicare, and promising to come up with a “beautiful” and superior replacement for Obamacare. But still. 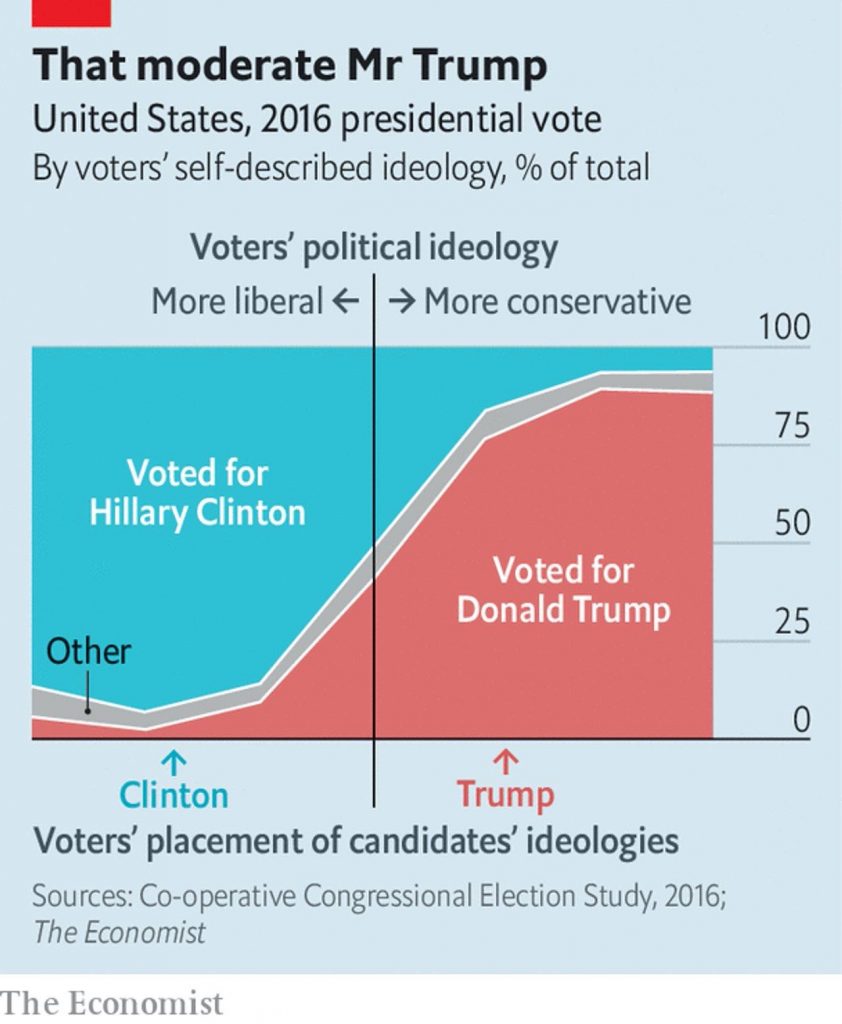 Dueling essays appeared this week on Brexit from two brilliant thriller writers I’ve been reading for as long as I can remember.

THE GUARDIAN John le Carré on Brexit: “It’s breaking my heart.” This is the transcript of a valedictory speech the great novelist delivered last week in Sweden accepting a prestigious lifetime achievement prize. He laments the lack of leadership that led his country to “sleepwalk” into Brexit, which he calls “this wanton act of political and economic self-harm.” He ends by quoting May Sarton: “One must think like a hero to behave like a merely decent human being.” Read this if you love le Carré. Or if you just love great writing by a master.

Frederick Forsyth, author of classics like The Day of the Jackal and The Odessa File, isn’t a literary master of le Carré’s caliber. But he wrote a punchy op-ed in THE DAILY EXPRESS titled “Elites got it so wrong on Brexit — we just wanted our country back.” It’s a good read, especially if you haven’t read many, or any, smart defenses of Brexit. Forsyth may lack le Carré’s eloquence, but he shares his contempt for decades of British post-war leadership.

THE ATHLETIC “It’s a loss that you can’t replace”: On the legacy of John Altobelli Powerful profile of the Orange County baseball coach who died along with his wife Keri and daughter Alyssa in the helicopter crash that killed Kobe Bryant and his daughter Gianna. “Altobelli’s tenure at OCC included more than 700 victories and four state titles,” writes Fabian Ardaya. “His impact was felt far beyond. He was an icon for a junior college community, one whose presence extended far beyond that.”

TWEETS OF THE WEEK: This was a dark week, so I’m posting a few extra tweets that made me laugh. The last two should be read as a pair. 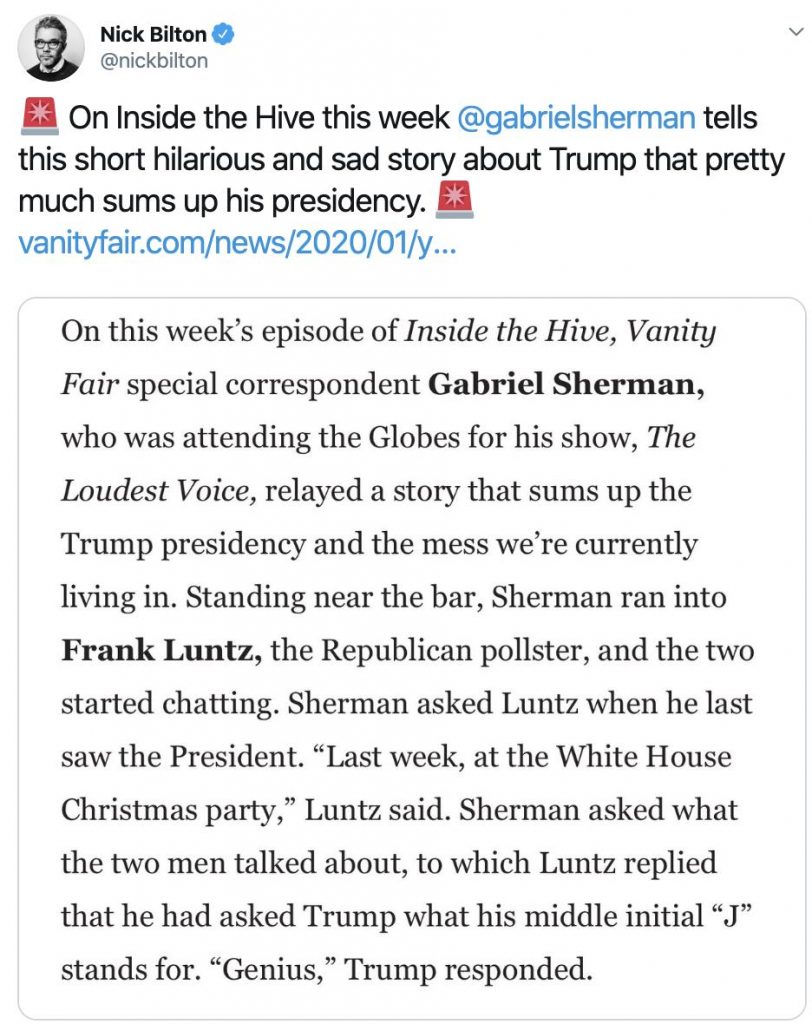 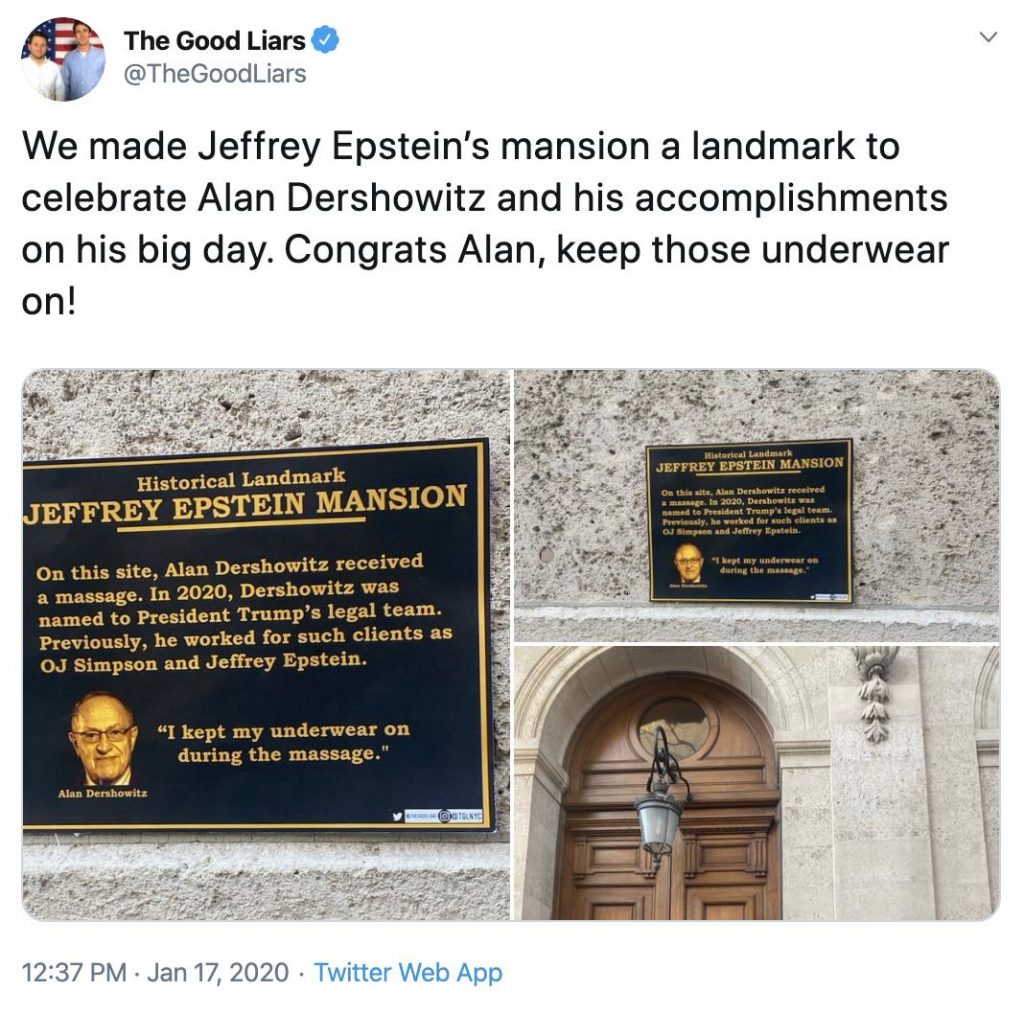 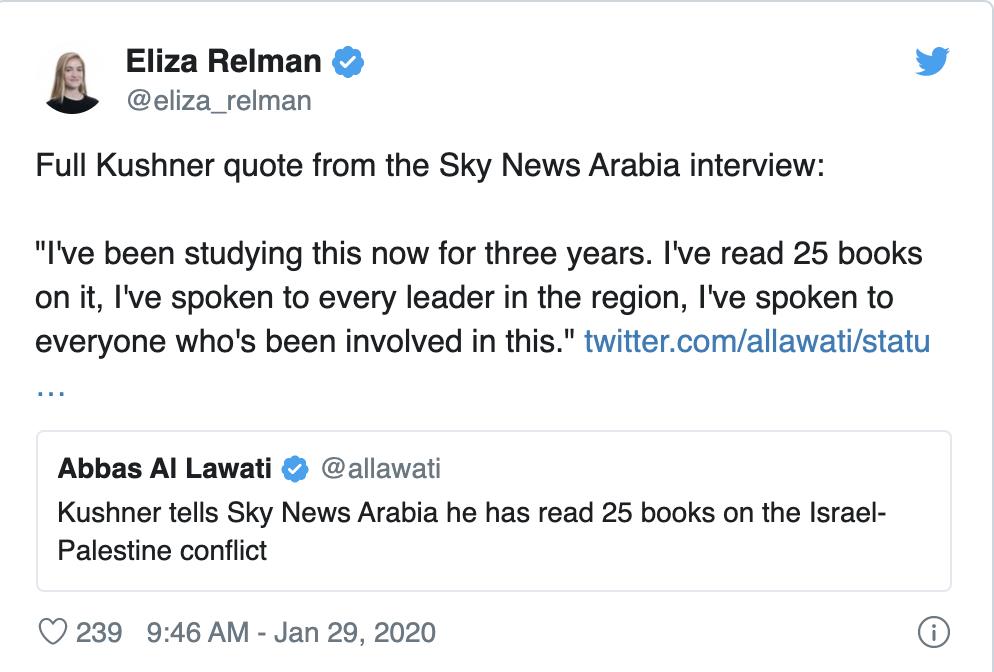 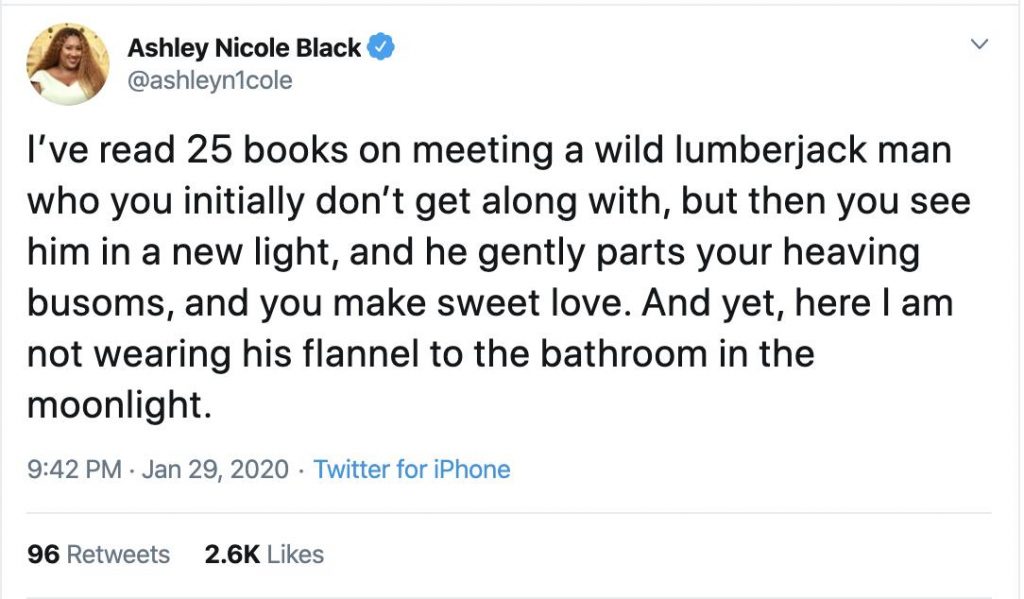 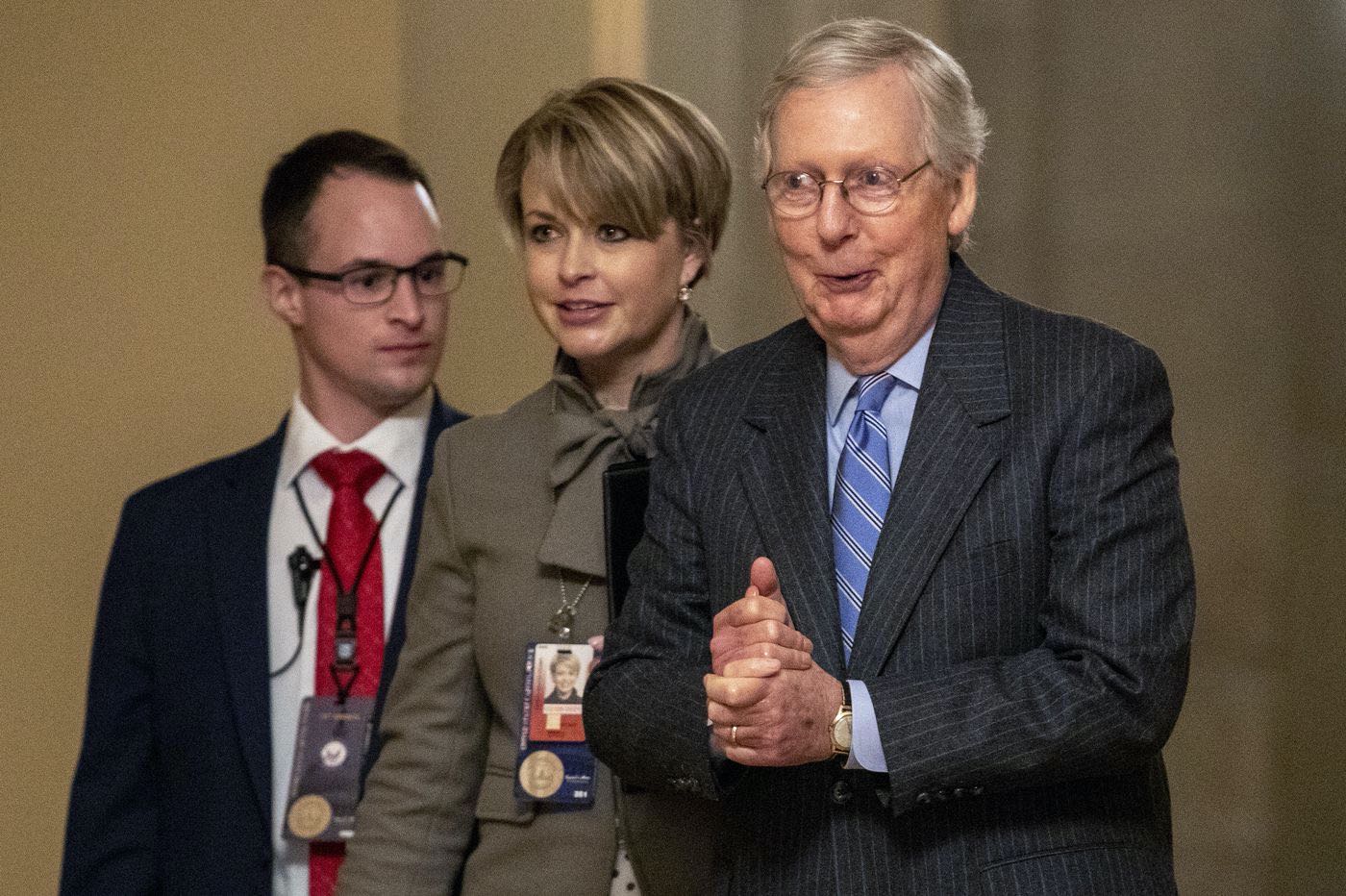