In Germany’s southernmost state of Bavaria, it’s Oktoberfest season. For most of the six million annual visitors to the sprawling 100-acre Theresa Meadows fairground in Munich, that means giddy participation in the world’s most elaborate exercise in imaginative folk culture. What started in 1810 as a celebration for a royal wedding and continued as an agricultural fair to promote the rural kingdom’s productivity, is now a two-and-a half-week long, carefully choreographed celebration of high-tech Bavaria’s bucolic past.

Women arriving in BMWs don the Dirndl, a low-cut eroticized version of the traditional Bavarian rural peasant’s outfit, while otherwise straight-laced men strap on tight Lederhosen. As the day progresses, the crowds, whose sobriety dips along with the sun, stumble from one gargantuan beer tent to another, overeating on local specialties such as brezl, semmelknödel, and weisswurst, all washed down by a special, high-alcohol content beer sold in one-liter mugs. This is where deep national identity is performed.

For Bavarian politicians, Oktoberfest is a busy time. The mayor of Munich opens the first ceremonial barrel of beer and declares in the local dialect, “O’zapft is!” (“it’s tapped!”). Politicians regularly visit the tents not only to schmooze with local elites, but also to drape themselves in the symbols that structure Bavaria’s distinct regional identity.

Bavaria enjoys a semi-independent status within Germany owing to a number of historical and demographic factors: deeply Catholic and on the whole more socially conservative, Bavaria submitted to Prussian rule relatively late in Germany’s unification process. Like many semi-autonomous regions in Europe, Bavaria has its own party which has dominated the state’s politics for over half a century, the Christian Social Union (CSU), a sister of the national party led by Angela Merkel.

Looming over this year’s Oktoberfest celebrations is a regional election on October 14, which, if the poll numbers hold, would prove to be the CSU’s worst result in 68 years. A right-wing challenger, the innocuous sounding “Alternative for Germany” (AfD), has attracted the support of up to 14 percent of primarily CSU voters with its apocalyptic, anti-immigrant rhetoric depicting the impending Islamization of Germany, dark-skinned hooligans assaulting ethnic Germans, and the collapse of Germany’s welfare state through Merkel’s immigration policy.

Once seen as a party with a base limited to disgruntled East Germans, the party is on course to becoming the second strongest in the country. AfD and CSU politicians have engaged in a feverish war of words at campaign stops about who will best protect Bavarian autonomy and conservative values.

Oktoberfest itself usually enjoys a political ceasefire where parties refrain from attacking each other. That has changed as of late and the festival is now often caught in the crossfire of the AfD and CSU’s turf war. Visitors this year recalled to me the AfD’s “fake news” campaigns from 2017 with images of empty Oktoberfest fairgrounds due to terrorism fears and heavy security occasioned by the CSU’s supposed “open-borders” policy. This year, the party’s campaign posters line the trees and signposts circling the fairgrounds with one claiming “We keep what the CSU promises!” and another declaring that Franz Josef Strauß, the CSU’s honored patriarch from the 20th-century, “would have voted for the AfD.”

Beyond the Oktoberfest, the AfD’s effort to unseat the CSU and become the party of Bavarian tradition can range from the absurd to the alarming. One of their posters depicts a group of blond German students joyfully frolicking down a school hallway with the text “Islam-Free Schools!” in large letters below. Not to be outdone, the CSU has recently instituted a policy that all public buildings must display a crucifix as a symbol of Christianity’s importance to Bavarian identity.

The struggle over the meaning of one term in particular, that of Heimat, a controversial word roughly translated as “homeland,” has played a central role in the campaign. Once tarnished by the “blood and soil” ideology of the Nazis, the word still evokes a idyllic rural past in the German consciousness, so much so that the government championed an initiative called “Ministry of Heimat” with an inclusive spin to promote social solidarity for alienated communities left behind by globalization. Opponents argue that a term with such a compromised past cannot be the glue that holds a multicultural society together.

The public discussion of Heimat has served as a prism to discuss how to assimilate migrants and the abstract question of to what degree a common culture is required to create national identity. Does feeling “at home” in Germany require a shared religious background and western secular values? For the center-left, if the term is to be useful at all, it must be rescued from its racialist past and be endowed with a meaning that embraces the ethnic and religious diversity of modern Germany.

The AfD, however, has no intention of ceding the nativist ground to the CSU. Using the term over 100 times in their party platform, the AfD in Bavaria has attacked Berlin’s pro-migrant policies and the idea of Heimat as tolerance and cosmopolitanism. Their campaign in Bavaria has accordingly mobilized the symbols of Bavarian identity — above all Christianity, the traditional family, and a sense of orderliness, safety, and homogeneity communicated by images of rolling farmland and pristine nature.

Such images have dark implications. In party chief Alice Weidel’s campaign speeches, she unceasingly prophesizes an ‘uncontrolled’ flood of violent migrants engulfing orderly Bavaria. Weidel declared in September “in small towns of Bavaria, people are getting stabbed, mugged, and raped!” The asylum seekers in such stories are almost always described as Arab.

Perhaps the most beloved single sentence uttered by AfD politicians is “Islam is not a part of Bavaria!” At one recent campaign stop in Bavaria, the highly controversial AfD member Bernd Hoecke — who in 2017 called for an end to German shame over the Holocaust — stood before a podium with the image of a woman in a black burka with the text “Islam is not a part of Germany.” When used by the AfD to exclude migrants from foreign cultures, the understanding of Heimat as western values and a deep connection to the traditions and culture to one place, the term is clearly a dog whistle with unspoken ethnic underpinnings.

Perhaps no better example of the Heimat arms-race between the CSU and AfD exists than the image that greets visitors to the CSU’s party platform. The computer-animated scene depicts an idealized visual portmanteau of Bavaria with all the key features of Heimat the CSU wishes to project to voters. In the foreground, a blond and blue-eyed family strolls along a piercing sapphire stream with a backdrop of verdant rolling hills, towering alps, a farm, and a picturesque village with church steeples and an Oktoberfest Ferris Wheel. A high-speed train speeds through the fields and a police helicopter hovers vigilantly overhead presumably preventing the migrant horde from plundering the village. In the program itself, the party emphasizes that a “common” culture “creates identity and cohesion…whoever lives with us must respect the common culture of our state.”

Images like these have not helped the CSU’s sinking numbers, however. And after months of trying to drown out the AfD’s anti-migration rhetoric by matching their pitch, the CSU has of late auditioned a new strategy to distinguish their brand of Bavarian patriotism and politics from the AfD’s ethnic and cultural chauvinism.

At the CSU party convention on September 15th, the embattled politician Markus Söder gave a combative hour and a half speech in which he characterized the Bavarian way as a “humane” conservatism, a term he repeated three times. Law-abiding immigrants who want to integrate will be welcomed with open arms. Although Söder still hit the right notes with nods to maintaining Bavarian identity (“Bavaria is family land!” and “keeping the church and tavern in every village”), he presented the CSU as the party of moderation, the adults in the room. He characterizes German politics as dominated more and more by right and left extremism, concerned more with protest than actual governance.

It remains to be seen how successful the CSU’s two-track policy will be, with a modern, diverse Bavaria presented on one day, and an exclusivist, Christian, and traditional Bavaria on the next day.

Fittingly enough, the Munich Oktoberfest is in fact divided into two separate festivals. There is the larger one with modern rides and rollercoasters, tourists from all over the world, no entry fees, with packed and sometimes rowdy beer tents. Adjacent to the main festival, and separated by fences and security, is the smaller “authentic” Oktoberfest launched in 2010 known as the “oide wiesn” (“old meadow”), full of “nostalgic folk attractions, colorful traditional costumes, and horse races after the pattern of 1810.”

The Bavarians I shared Oktoberfest beer with this year all expressed their enthusiasm for the more exclusive, old-timey atmosphere of the oide wiesn. Sitting in a beer tent in the oide wiesn while watching a Bavarian folk dance accompanied by traditional music, it wasn’t hard to understand why. To ask them if such nostalgia extended to politics would have violated the festive mood. The Oktoberfest is mostly just make-believe after all. 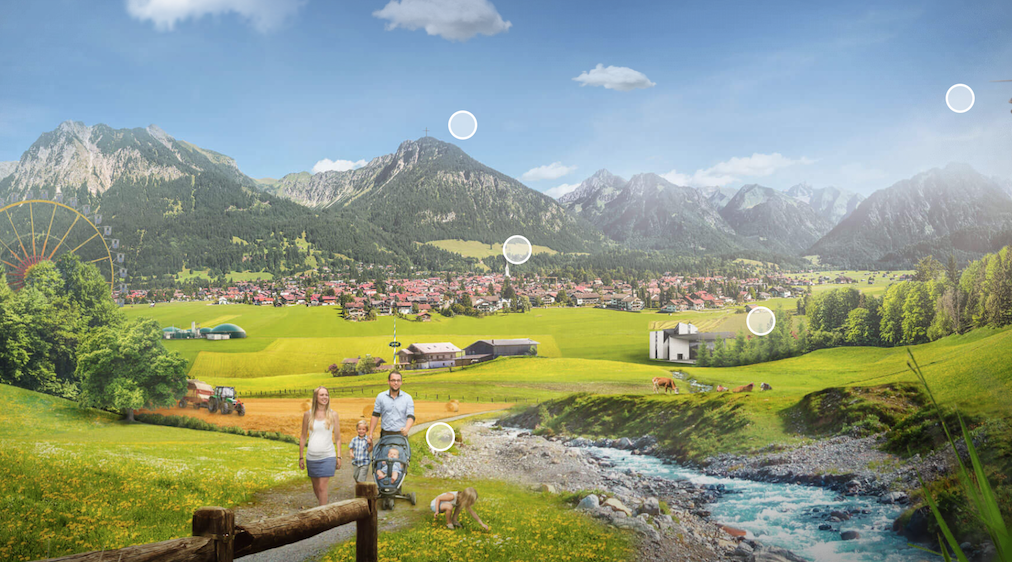