I spent my 27th year typing letters of application, the nerves in each hand wrecked by this seemingly endless work, my persistence motivated only by the fear of becoming homeless.

Three weeks prior, I had drifted through the various halls of the Writing Institute, looking for the Administrator. The problem was this: when he approached me last, I had intended to appeal my case, but was put off by his immediate need to instruct—

You are exactly what they worked against during the Eugenics movement.

You are like a person who scored poorly on an intelligence test.

You are like a person who needs remedial instruction.

An hour into his lecture, I can only stare. In such a brightly lit corridor, I had no idea this darkness was possible.

When I stood before the class, I sensed — ever so slightly — the possibility that harm could be done to me. As Yitian sat in the penultimate row, 40 minutes late, her mouth seemed to harbor a secret. Suddenly her remarks bore a certain heft. She is no longer concerned with how many gaps may plausibly be found on a printed page, or the number of words from here to the next day, or the next, because she sees only the little tremor in my hand. The nerves shatter, the face grows pale, the community building exercises resume. All of which seemed to say to her, if there is so much air is lost in breathing, why not assume the role of the empowerment?

Deadlines passed. The snowdrifts grew taller. Yitian grew so quiet she was longer here. That is, until grades posted to the university’s online student information system. The girl spent the afternoon posting message after message: When I found out, I went behind your back for days. I am hesitant to tell you the things I have done… At first, I was convinced the event could be explained quite simply: somehow, the heart had come unfastened from the mind. I thought in the beginning that it was nothing, but now a total of five missives blinked back at me from my screen. In one of them, she suspects this is the punishment for something that lies just beyond her comprehension. In another, she reminds me how months ago, in the hallway, she had called the community building exercises stupid. But she suspected that this was really over something else. The first late assignment perhaps? Or the second? She continued to test the idea that no one was on the other end of the line: When you went away after classes, you didn’t know…. Still, I assume that her mind will resume its right trajectory in time, and this is what I tell my father after he calls me in the airport in Copenhagen, when I am on my way back from the conference. She will confess to some small crime, then she will apologize.

The anxiety dreams tried to show me — here, no here — something terrible that had been buried in the snow. Some nights a dead rabbit, some nights it was the dress I had been saving for holiday. When my flight landed, I reported the string of threatening messages to my supervisor. My car was old, but I hoped that it hadn’t been keyed. And despite what we all said about the offices they maintained for graduate teaching assistants, I didn’t want to see the space vandalized.

When I read the return message, posted from my supervisor’s gmail account, alarm registered first in the body, then in the mind—

What have you done to provoke her.

What is it about your teaching.

In a room lit up by the campus safety beacons, I can only stare. My evaluation, as rendered, was standard practice for a student turned ghost. Three absences mark the beginning of the long descent, and after five days unaccounted for, the cliffs can longer be scaled.

To understand my endangerment, one must first know several things about the funding structure of the college: students who resided in close proximity to the campus attended cheaply, those with far flung geographies would not only travel but pay and pay and later, pay. For the bursar, there was still more money to be had. To board a transatlantic flight to the college was a lengthy sentence to origination fees and overdraft charges. Said simply: the international students paid triple what was charged for out of state tuition, with no financial aid to be spoken of. They and their parents lived their lives in debt.

Of course, the supervisor of the freshman writing program, administering required courses for the science majors, did not want to be held accountable for a lost trove of wealth. You must understand, blame is a changeable backdrop to whatever action takes place. Accountability is unstable in both form and nature, the way we have always imagined women to be. Roughly translated: she was the customer, I was merely rendering the desired service.

Numerous job postings in the MLA Bulletin have advertised universities seeking candidates with terminal degrees and “excellent customer satisfaction skills.” To instruct is to render a business transaction. David Perry, in his article in The Chronicle of Higher Education, examines ads like this one, suggesting the danger inherent in treating education as a commodity, “It’s a way of reversing the power dynamics. A customer holds a special place in our society. They have the right to complain, pressure, and go over the head of the worker to the management.” For me, this attitude culminated not in a list of pedagogical questions, but rather, in actual physical endangerment with no protection to be spoken of. The next week, a tenured professor was threatened in a similar string of emails, her office space vandalized and her car keyed. When she reported the incident to her supervisor, he called the police.

One tends to forget that part of delivering impeccable customer service is outsourcing labor. After all, buyers want the very best for less. According to Adriana Kezar and Daniel Maxe’s recent article, “The Changing Academic Workforce,” contingent faculty are compensated approximately sixty percent less than tenured professors for what is essentially the same work. As a graduate teaching assistant, I was taking out loans so that I could afford to teach that section of English composition. I borrowed money so that I could field comments from my supervisor about my genetic inferiority. Like so many of the doctoral students at that college, I thought I was different. I knew I would be able to pay it all back later, with 7.21% interest.

Which is not to say that utilizing contingent labor is woefully, and entirely, wrong. There are many instances when picking up up a course or two at the local college can lead to supplemental income, as well as delivering instruction with little to no overhead for the university. Washington University’s continuing education program, University College, boasts that “University College is continued education at its highest quality, with tuition rates that are surprisingly affordable and competitive.” There is no doubt that the community at large benefits from this program, priced at one third the rate of their prestigious College of Arts & Sciences.

The problem at hand is when contingent laborers face a substantial power imbalance, and this disempowerment is magnified by the broken financial infrastructures of the student loan system. At the center of this matrix of power, and its various abuses, are graduate teaching assistants.

More often than not, GTAs have little or no recourse, as they occupy a liminal space when considering labor laws. Yuki Noguchi recently contributed an article to NPR Ed, which was called “Are Graduate Students Employees?” She offers an overview of a longstanding debate over whether or not graduate student employees can legally unionize, as they are often classified as students, and their labor is not employment, per se. This was the case for Paul Katz, a Columbia University doctoral student who worked well over the equivalent of full time hours, and spent more than 40% of his income in rent. As a result of their formal status as students, Katz and his colleagues were legally prevented from forming a union.

So much of the time, our labor as graduate students is touted as a privilege, and we are reminded it is an honor to be here, enrolled in college at all. Indeed, when Yale’s grad student population organized a strike, they were met with little sympathy by the press. In April of 2017, when a hunger strike was invoked as a bargaining tool, they were greeted with such mocking headlines as “Yale ‘hunger strike’ apparently means eating when hungry,” as journalists were quick to gesture at their relative good fortune.

But the issue at hand, as I understood it, was the use of high priced consultants to disempower what was essentially an already disempowered group within the university. According to The New York Times, Yale’s administration, like that of many other colleges, used expensive law firms to block union legislation, drawing from resources that could have been invested instead in the university community.

Of course, this desire to maintain to power is nothing new. The graduate school I attended, where my supervisor frequently preached the dark gospel of Eugenics, was actually engineered to be riot proof. The moment you walk on the campus, you will notice glass tunnels connecting the various buildings: English, Musicology, Fine Arts, Biology, and so on. Of course, new recruits will ooooh and ahhh at the innovation of this architectural design, as they don’t have to trudge through the snow in their good shoes. But they are quick to forget: the administration can spot a mob a mile away through the winding glass corridors that connect each and every room on that campus. 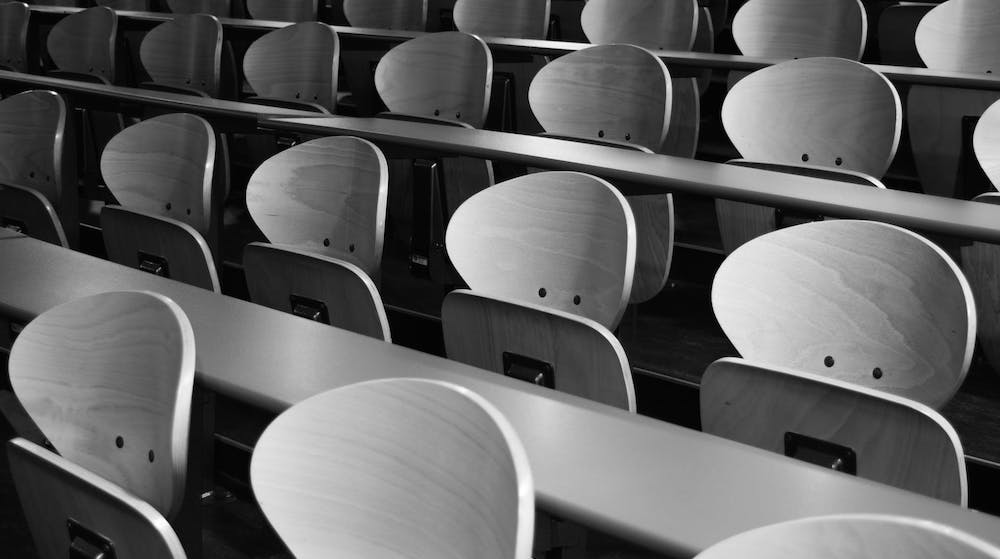