“Some will say that all we have are the pleasures of this moment, but we must never settle for that minimal transport; we must dream and enact new and better pleasures, other ways of being in the world, and ultimately new worlds.”

—José Esteban Muñoz, Cruising Utopia: The Then and There of Queer Futurity

It is so hard to care about things. I’m in a hotel room in Spain as nervous as I can be watching the US Women’s National Team play England in the semifinals of the World Cup. My partner Jessi is laying on the bed, occasionally hiding her head under pillows when the Lionesses get close to our goal. I can’t sit down: I’m shuffling from foot-to-foot, checking Twitter, and texting with friends who are also watching.

We score! I’m elated! They score. Nervous tension returns. We score again! More joy! Forward Alex Morgan celebrates by pantomiming drinking tea, pinky out. Immediately people around the world critique the gesture. A friend watching back home is not impressed, and in response to my adamant defense of the team and the full spectrum of their gestural repertoire, she texts me: “all the critical distance is gone, Linz.” I shoot back: “I’ve got criticism for miles!”

But my friend’s text nagged at me. Had I lost critical perspective? I think back and do some accounting of my capacity for criticism. Beginning with Trump’s election in 2016, there are days when I have the stomach to read the news and there are days I just can’t, nights when I turn on Rachel Maddow and after just a few minutes have to turn her off. I’m filled with dread when a cab driver in Vancouver, after learning I’m American, wants to talk about the latest accusation against the president in the ever-circling news.

I’m not proud of this, and in fact this inability to handle the world has felt like an embarrassment to me both personally and professionally, since I make my living as a sociologist and tend to think of myself as someone engaged and in conversation with what’s going on. To deal with this cocktail of anger-despair-frustration I’ve been going to the gym, putting on CNN with closed-captioning, and then rage-running to Belle and Sebastian. Anderson Cooper’s handsome face, the sad state of my country, and Stuart Murdoch’s honey-tinged voice all swirling in a strange vortex of exhaustion and adrenaline set on repeat. This is what it takes some days for me to handle the news. This practice did not begin with the Kavanaugh hearing, but afterwards, it was ramped up.

I watched the hearing live-streamed on my laptop in my home office, all nine hours. I watched as that smug, privileged boy-man attested to how good he was and how much he liked beer and how little he remembers of the evening he was accused of sexually assaulting Christine Blasey Ford. Watching this I felt my insides transform into an angry pretzel. I’ve known so many prep school boys just like this, the ones who never tired of threatening or showing you that they could do what they wanted, and it would be you who would face whatever consequences might come. After Kavanaugh was confirmed, I felt depressed and physically ill for days. Then came a kind of numbness, then more anger and rage-running, and then alternately being able to handle and not handle the news.

When the World Cup began, we were reminded that, in the Digital Age, old videos surface and can reveal who people really are — or were. They brag about sexual assault, or that they won’t go to the fucking White House. I delighted in Megan Rapinoe’s dismissal of the question to visit Trump if they won the World Cup as ridiculous. I relished Ali Krieger backing her up, saying: “I refuse to respect a man that warrants no respect.” The team kept saying whatever they wanted.

Rapinoe put away another penalty kick against the Netherlands, like it was as easy as tying her shoe. Rose Lavelle scored such an amazing goal that people were circulating fourteen different angles of it on the internet, but we still wanted more. They won, they swaggered, and they didn’t care if people liked it or not. Reader, I loved every minute of it.

In Jean-Philippe Toussaint’s meditation on his relationship with the game, Football, he writes: “the ball, while round, is recalcitrant and capricious, it resists us, thwarts us, humiliates us.” In the summer of 2019, the ball rewarded us again and again, it yielded to us, lifted us. Even the “us” expanded; it included those who never cared about the sport, or those who supported another set of fearless women in the colors of another country to roll with us, at least for a bit. With every goal, each celebration, and press conference quip some kind of rage-knot in me loosened a bit. And with this loosening I feel less ground down by America. I feel reinvigorated to really look at my country again, which is so flawed, so unjust, and so corrupt, but also full of folks — sporting and not — living like other ways of living are possible and necessary.

I can’t get enough of watching the team take victory laps — the raucous champagne party in the locker room, the ticker-tape parade in New York City, and the ESPY awards, where they were decked out in an array of gendered styles, from sparkly, strappy gowns to genderqueer blazers and bowties. And then there was Megan Rapinoe on Anderson Cooper, earnestly asking the president to be better, which I listened to on the treadmill with the sound turned up. This is when I realized that the Kavanaugh hearing was when I lost critical distance. It was a moment when I felt things collapse and I couldn’t muster much beyond rage and despair at our current American moment.

Things began to come back for me during the World Cup. The fact that the US Women’s National Team won only amplified this shift. Rapinoe refusing to sing the national anthem, the team’s collected confidence and queerness, was enough to move me. It allowed me “to see and feel beyond the quagmire of the present,” as José Muñoz writes in Cruising for Utopia. This shift in feeling and thinking is not anything I could have expected, but it has been an immense and joyous gift. It has also been a shared one.

For the past few months, as I scrolled through social media, what I’ve seen was mostly outrage from myself and the folks I follow. Since the World Cup, my feeds are filled with joy — celebratory images and blocks of texts piling, like firewood promising a warm future. I’ve loved the US Women’s National Team, and this iteration in particular, for a long time, but I didn’t realize what this World Cup would do for me — and for us. We chanted equal pay! We decided that Megan Rapinoe was our president. We declared that Alex Morgan was the Queen of England. It was silly, and it was serious. The US Women’s National Team is queer and fun and unapologetic. They refuse to be reduced, and they are open and honest that they deserve everything they’ve achieved, and that they want more, but not only for themselves, for us — the ever-expanding “us” — too.

Muñoz writes: “there is the idea of hope, which is both a critical affect and a methodology.” I think that queer joy, too, can be a way of thinking and a critical methodology. The joy comes after a moment of hope slides into a reality. Queer joy desires to extend this into the future. First this requires a deep engagement with the field, and with others, both like and unlike us, who share the same goals. Then a celebration. A wide stretch of the arms. A sip of imaginary tea. A fall to the knees with clenched fists. A kiss to the girlfriend we didn’t know you had. Something unabashed and raucous and American — imperfect, but still on the hustle towards something better. 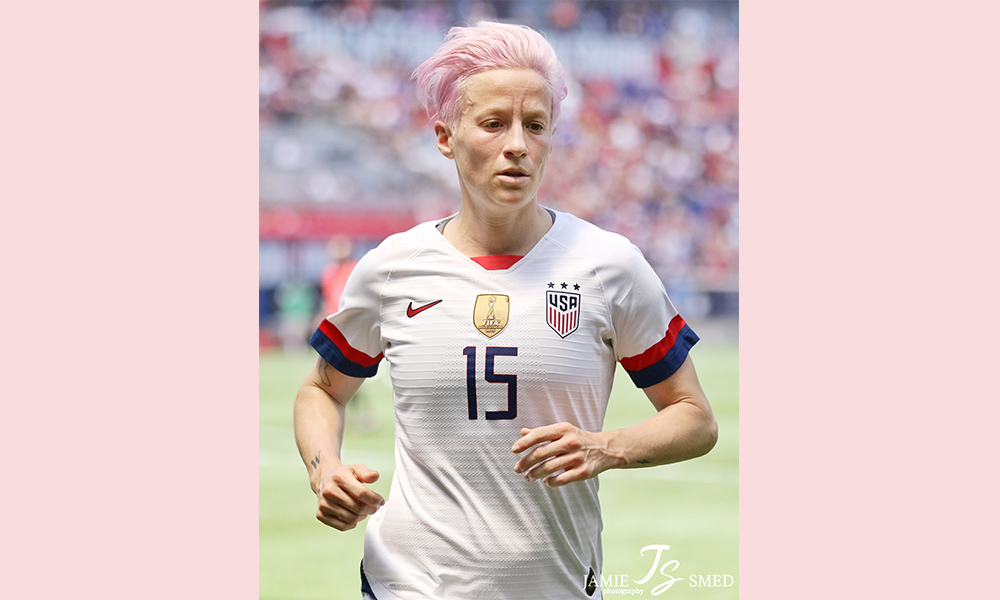