Up until now the teachers strikes that have garnered the most coverage have taken place in the least likely places — deeply conservative states. But now, the #RedForEd movement has come to Los Angeles, thirty years after the city’s last teachers strike. A cursory analysis might suggest that beyond the general lack of funding that K-12 education faces, there’s little that connects the wildcat strikes in Oklahoma, West Virginia, and Arizona to the current UTLA strike.

A deeper understanding of the spirit animating the UTLA strike reveals two important things that connect UTLA’s actions to the last year’s #RedForEd strikes and California’s own complicity in public education’s current crisis. Most readily, teachers in LA are using the same strategies as strikers in red states, where teachers have aligned their interests with the common good to make demands that go beyond wages and hours, the permissible topics of bargaining. It was back in 2012, that the Chicago Teachers Union developed the bargaining for the common good framework for teachers when the union published “The Schools Chicago’s Students Deserve.” The CTU document made a clear case for the need for smaller class sizes and host of other issues that have since become standard demands for teachers’ unions across the country. The bargaining for the common good framework is a recognition by labor that fighting for quality public services under neoliberal austerity requires mobilizing beyond the worksite.

Given this context, the UTLA strike is not just the latest teacher revolt in the fight for quality public education that started in Chicago in 2012, but possibly the most consequential, because it is the sleepy suburbs of the San Fernando Valley where the beating heart of the white homeowner tax revolt lies. It is a revolt that over the last four decades has spread across the country, provided the political cover and justification for the neoliberal restructuring of the economy, and consequently, has made necessary the wildcat actions initiated by workers in the #RedForEd movement.

The watershed moment of the taxpayer revolt was the passing of Proposition 13 in 1978; a year before Thatcher was elected Prime Minister of Great Britain and two years before Reagan would ride the revolt to national power. Its passage signaled a profound change in the direction of the country, and one that other states were keen to follow. The authors of Prop 13, Howard Jarvis and Paul Gann, sought to roll back taxation on property, allegedly to protect homeowners from ever increasing taxes. Jarvis even encouraged renters to get on board, arguing that landlords would pass on their savings to tenants, which, of course never happened. Hidden behind the requisite individual choice and anti-State sloganeering was the consolidation of white homeowner power in the California suburbs that had increased under the auspices of white flight and redlining, a de facto city pastime in LA.

While property owners may have benefited greatly from Prop 13, public education was gutted. Grade school public education funding in the United States relies primarily on local taxes, specifically property taxes, and California is no different. When Prop 13 passed, the state’s most important funding stream for public education was cut off, and by some estimates California currently ranks 41st in the nation for spending per student. In the short-run, this meant a deterioration in physical plants, overburdened teachers, and the wanton destruction of a what had been, arguably, one of the crowning achievements of California, its public education. In the long-term, this meant a clear opportunity for charters and their wealthy backers to move in and siphon off what little funding public schools do get, which is one of the most contested issues of the current actions in Los Angeles.

However, until 1996, there were still ways for local municipalities to get around some of the restrictions on raising revenue introduced by Prop 13. And so, a decade after Jarvis’s death, Californians voted to expand the power of Prop 13 to hideous proportions with Prop 218, or the “Right to Vote on Taxes Act.” Prop 218 closed loopholes in Prop 13, expanded the supermajority requirements to questions of municipal taxation, and eased signature requirements to get anti-tax legislation on ballots. Today, 15 states, including California, now require legislative supermajorities for all imposed or increased taxes, the most recent addition, Florida, where voters chose in November to impose such restrictions on its legislature.

Prop 218 can be seen as the full-throated victory of the California anti-tax regime, and one that, through the expansion of supermajority requirements for local tax initiatives, kneecapped municipalities’ ability to raise revenue on their own. Recent examples of this supermajority requirement in action are the failure of 2018’s Proposition A in Alameda county, which would have raised $140 million for early childhood education and the failure of Los Angeles County’s 2012 transportation initiative Measure J. Both measures received over 66% percent of the vote but failed because the needed 66.67% to pass. Ironically, Prop 13 itself only passed with 62.6% of the vote.

What started with the taxpayer revolt has resulted in severe restrictions country-wide in how local citizenry and governments can fund everything from transportation to education. The anti-democratic consequences can be seen clearly in the contours of the UTLA strike. As both sides argue over the fiscal responsibility of the teachers demands, the simplest solution — let citizens vote for a new tax revenue — can be held hostage by the forces of reaction; an entirely predictable consequence of Proposition 13. The fever dream of the free markets is little more than a sleight of hand trick to take autonomy from localities and place it in the stewardship of tiny minorities of voters or legislators, an irony that should be obvious.

Over the summer the Los Angeles Times reported on the gross abuse of the Prop 13 regime, highlighting how feudal California has become. Thanks to the taxpayer revolt, property owners are able to bequeath assessments to children, such as the case of the poet Dorothy Bridges, wife of the actor Lloyd Bridges, who willed her tony Malibu beach property to sons, Jeff and Beau, and daughter Lucinda. The siblings were able to avoid an extra $300k a year in taxes because of the current system. Ostensibly, this was designed to prevent children of the deceased to be saddled with massive bills. However, the Times reported that “In Los Angeles County, as many as 63% of homes inherited under the system were used as second residences or rental properties last year” and that comparable situations existed in many of the most desirable locations in California, such as Sonoma and Santa Cruz. We take some hope, however, from the fact that voters rejected the 2018 attempt by fiscal hawks to extend the reach of Prop 13 via Prop 5, which would have allowed homeowners 55 years or older to transfer their assessments to new home purchases, enabling them to carry literally their title of nobility wherever they move.

Clearly, this system is untenable, and its effects reach well beyond public education. As Mike Davis points out in Ecology of Fear, “savage budget cuts, meanwhile, in the wake of California’s 1978 tax reduction revolution (Proposition 13), shrunk the [Los Angeles] fire department by 15 percent at a time when demand for its services had increased by more than 50 percent.” This led to understaffed stations and an inability for fire marshals and other officials from ensuring the safety of the most vulnerable of the city’s residents, with massive conflagrations consuming whole tenements in the Westlake District, which alone killed 43 people between 1982 and 1993. Davis also argues that what little services the fire department could provide went overwhelmingly to wealthy property owners in Bel Air and Encino.

If there was ever a time that historical circumstances were so well in alignment, this is it. California’s uneven development has reached a critical juncture, and as teachers go out on strike demanding higher wages and better working conditions, we must ask, why were they forced into this in the first place? The answer is simple, but the remedies will be difficult. At this moment, we must not lose sight of why LAUSD workers are on the picket line. The voters put them there by believing, some 40 years ago, that the boom mentality that drapes over the state like a Tule Fog could last forever, even if only in their minds.

Like drawing an infection closer to the surface, the LA strikes have the chance to expose a contradiction that is at the heart of California’s, and the nation’s inequality. But this can only be done if we take a wide view of the situation. The rank and file teachers and school workers already realize that their plight is one they share with fire fighters, nurses, and the myriad other workers who have chosen to work for the common good and the communities they serve. What is needed is to make explicit that the fate of public sector workers are bound up with the consequences of Prop 13 and that the regime of austerity unleashed by the Howard Jarvis Taxpayers Foundation needs to be dismantled.

Rolling back the consequences of Prop 13 will take more effort than just  qualifying a ballot measure because the influence of Prop 13 extends well beyond funding for public services. As Peter Schrag argues in Paradise Lost, Prop 13 influences “how California communities are planned and shaped, and on the sense of the community — or lack of it — in which they exist.” We will need to do the hard work of  rebuilding communities that privileges common purpose over individual gain. To do so will require labor moving beyond transactional coalitions and embracing all the struggles their members face. It will take more experiments in bargaining for the common good and more strikes that center the concerns of all stakeholders. Toppling Prop 13 will also take renters and tenants unions doing work on the ground to connect the gutting of public services to the plight of renters across the state who daily face the prospect of being priced out or evicted for another Airbnb experience or spectacle for the bi-coastal rich to enjoy on their winter sojourns.

The very public and very long-term attack on public sector workers and unions in states like West Virginia and Oklahoma has its origins in the white suburbs of LA now snarled with UTLA picket lines. What stalks the edges of the LAUSD strike, and what has been haunting California and the nation for 40 years, is the specter of Prop 13 coming home to roost, and any fight for the common good must confront this legacy. 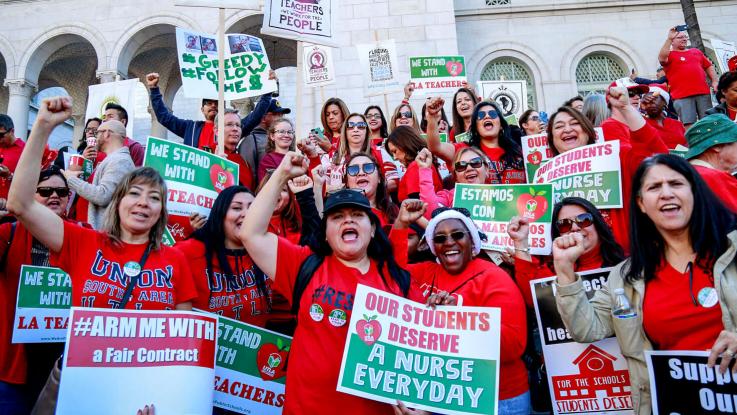