Aharon Appelfeld, prolific Hebrew writer and child survivor of the Holocaust, died last week in Israel. He was 85 years old. The author of several dozen books — including novels, collections of stories, and a memoir, many of which have been translated into multiple languages — and the recipient of numerous literary prizes in Israel and abroad, Appelfeld nonetheless saw himself as someone who fumbled with language. He carried with him a “mistrust of words,” evident in the sparse, simple, almost childlike style of his writing. The protagonist of one of his most well-received novels, Tzili, is mute. Others stutter. In his memoir, the author described his fraught relationship with language:

A fluent stream of words awakens suspicion within me. I prefer stuttering for in stuttering I hear the friction and the disquiet, the effort to purge impurities from the words, the desire to offer something from inside you. Smooth, fluent sentences leave me with a feeling of uncleanness, of order that hides emptiness.

Appelfeld said that distrust “remained engraved” on his body, and he attributed this to his experiences as a survivor. For the survivor, wrote Appelfeld, “speech does not come easily … and it’s no wonder: we didn’t speak during the war. It was as though every disaster defied utterance; there was nothing to say.”

Appelfeld was seven years old when war broke out and his mother was killed. He was sent with his father on a forced march to a labor camp, where the two were separated. Appelfeld later escaped and for two years he wandered the Ukrainian forests, working for a time as a servant for a village prostitute. He later found work in a Soviet military kitchen. After the war, he traveled to Italy with other survivors, and from there to Palestine. He was 14 when he arrived.

Though Appelfeld rejected the label “Holocaust author,” his works are all somehow in dialogue with the traumas of that event. It is never tackled head-on, but it looms large in his oeuvre. Perhaps his most chilling evocation of the Holocaust is Badenheim 1939, the first of Appelfeld’s books to appear in English. The story is set in a resort town near Vienna, whose middle-class, assimilated Jewish clientele is unable or unwilling to recognize the many signs of impending doom. An announcement requiring all Jews to register with the authorities ruffles some feathers, but is mostly shrugged off. Even talk of “relocation” to Poland fails to elicit any outcry. By the time the vacationers finally realize what is going on, it is, of course, too late, and the novel ends. Reviewing the novel for the New York Times, Irving Howe pointed to the abrupt ending as signaling a “limit to the sovereignty of words.”

Though he knew many languages — the German of his home, the maid’s Ukrainian, the Yiddish he heard spoken by his grandparents, as well as bits of Romanian, Russian, and Italian — Appelfeld, who had not finished first grade when war broke out, lacked a sense of rootedness in any language. In Palestine, as Appelfeld recalls in his memoir, survivors were being admonished to “forget,” “set down roots,” and “speak Hebrew.” Having lost his parents and his home, the boy was now forced to relinquish his mother tongue. For Appelfeld, Hebrew could be “nothing more than a stepmother.”

The most riveting Appelfeld story I know is one he never wrote, one he barely spoke of. At some point in the early 1960s Appelfeld and his father — who had not seen each other in 20 years, each sure the other had perished during the war — were reunited. Here is his account of the event, which he finally shared in an interview with Professor Michael Gluzman of Tel Aviv University:

I saw Father’s name on the Jewish Agency list, and I did not know if it was Father or not. I asked where he was. I was told he was at the ma’abara (immigrant transit camp) in Be’er Tuvia. At Be’er Tuvia they told me he was working in the orange grove. He had been at Be’er Tuvia for 10 days already, found a job and was working as a fruit-picker. I go to the grove and ask where he is, they tell me, “In that tree.” I see a ladder, and on the ladder stands a very old Jew. I address him in German and say, “Herr Appelfeld?” and he comes down the ladder, looks at me and cannot speak a single word, only the tears flow down his face. And for a whole day he could not speak a word, just this terrible crying. He does not tell me that he is my father, I do not tell him that I am his son. To this day I can’t do anything with it. It brings me to tears, it’s not something I can touch. I cannot. Not yet. Maybe in 20 years I will be able to touch this fire.

Had he lived longer, perhaps Appelfeld would have written of this event. Alas, the fire now remains untouchable. 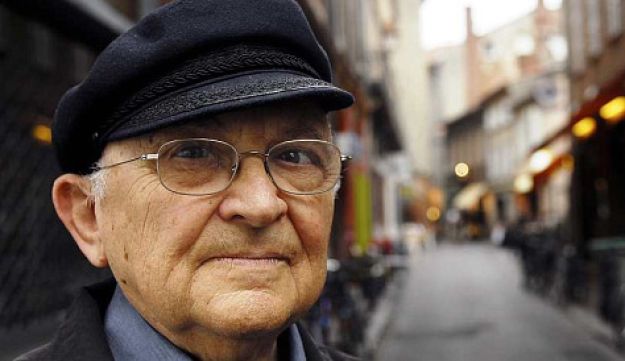