The National Labor Relations Board has reversed itself for the second time in this century: graduate student instructors at private universities once again have the right to unionize. With the ranks and working hours of non-tenured faculty far exceeding what they were twelve years ago, and interest among graduate students in unionizing far higher too, the decision represents a significant and hard-won victory for what remains of the American labor movement.

The administrators of elite private universities have responded to the decision with all the enthusiasm of their assembly-line-owning ancestors. In the past several days, many have begun issuing open letters to their students, discouraging them from taking advantage of their newfound right to collective bargaining. They are very concerned, you see. The private university is a special place, and formalizing the relationship between administrators and the non-tenured faculty who now perform roughly half of the undergraduate education in this country might spoil the rarified air.

What is remarkable — as the political theorist and CUNY professor Corey Robin has pointed out — is how similar all these letters are, how each, despite its excessive personalization and focus on the individual needs of the university, manage to raise the same three or four specters every time: “You’re students, not employees.” “You’re privileged educational elites, not poor laborers.” “A union will come between you and the faculty that wants to love you (but can’t, if you let a union get in the way).”

It is this last item that I am particularly interested in, this notion that a special, intimate relationship exists between graduate students and tenured faculty that could not possibly survive a collective bargaining process. A particularly shameless example of this line comes from Robert Zimmer, the President of the University of Chicago — the university where I was once an undergraduate. In light of the NLRB’s decision, he informed a university-wide listhost on Wednesday, it is “more important than ever to reflect on the fundamental nature of education at UChicago, and the potential impact that graduate student unionization in particular could have on the University’s distinctive approach to research and education.”

“Central to the success of graduate students is the intellectual relationship between students and faculty, particularly between students and their advisors,” Zimmer wrote. It wasn’t the fundamental unwillingness of managers throughout human history to embrace unionization efforts, but rather “the special and individual nature of students’ educational experiences” that had him worried. “A graduate student labor union could impede such opportunities. […] It could also compromise the ability of faculty to mentor and support students on an individualized basis.” A labor union “will come between students and faculty to make crucial decisions on behalf of students” by focusing “on the collective interests of members while they are in the union,” something that “could make it more difficult for students to reach their individual educational goals.” Decisions made based on the “collective interests” of a labor force? My god.

One wonders how deeply Zimmer must pity those poor public universities — Berkeley, Michigan, UW-Madison, obscure places, really — where unionization has long been a fact of life. When a newly-minted Chicago PhD secures an increasingly rare tenure-track position at an institution like Berkeley, does their advisor shake their hand, smile broadly, then whisper, “Just so you know, the union there will make it impossible for you to care for your advisees as I have cared for you”? The University of Iowa, where I am presently a unionized graduate student instructor, has seen twenty years of successive union contracts secure vastly superior working conditions. My advisor has not yet referred to me as “employee” in a distant way, sad memories of happier days scarcely hidden behind cold eyes — but perhaps I am the exception.

One also wonders how this all comports with The University of Chicago’s incessantly reiterated commitment to open inquiry and debate, a life of the mind unencumbered by emotional concerns (i.e., “special relationships” between human beings, one assumes). This is, after all, the institution which has just informed incoming undergraduates that it does not support “so called ‘trigger warnings’” or “condone the creation of intellectual ‘safe spaces,’” because such warnings and spaces undermine the university’s “commitment to freedom of inquiry and expression.” Is it possible that in the bustle of all that freedom, these high-minded academics failed to take a cursory glance at academic research into the question of graduate student unions? “Effects of Unionization on Graduate Student Employees: Faculty-Student Relations, Academic Freedom, and Pay” is a subtle title, I know, but the conclusions of that study are not:

I have not been a student at Chicago for some time now. I have never been a student at Yale, or Columbia, or any of the other top-tier academies so concerned by the chilling effect of union bureaucracy on the warm relationships between faculty and their adjunct servants. Perhaps they really cannot afford higher salaries or more generous benefits — they can’t even afford JSTOR subscriptions.

Yet surely access to academic databases is not beyond the reach of a man like Robert Zimmer, a man who saw his total compensation double over the course of five years, reaching $3.4 million dollars in 2014, and placing him atop the Chronicle of Higher Education’s annual ranking of the highest-paid private university presidents. Perhaps the “special relationship” truly imperiled here is the one between administrators and their universities. Being forced to negotiate fair contracts with the adjunct and graduate student instructors — who perform the bulk of daily labor, servicing undergraduate customers in exchange for their exorbitant, federally-subsidized tuitions — might cut into the cash pot elite universities ordinarily reserve for the hiring of new administrators and the subsidizing of profitable athletic programs. (The athletes themselves cannot unionize either, of course. They are not even paid.)

But then, as President Zimmer informs his charges in Chicago, none of this is necessary. “Recent experiences” — not research, mind you, experiences — “demonstrate that efforts to enhance the graduate student experience are highly successful when graduate students, faculty, deans, and the provost’s office work together directly. Dialogue among students and faculty has led to increased stipends […] increased remuneration for teaching […] expansion of health insurance coverage” and “child care grants,” among other benefits. In other words, there is no need to force our benevolence: you’ve already got it. But never forget, those gains are contingent on our benevolence. Under true negotiating conditions? “It is unclear whether a graduate student labor union would have achieved any of these outcomes.”

Indeed — who knows what outcomes collective bargaining might achieve in the neo-gothic halls of Chicago, in Harvard Yard, or in Morningside Heights? Surely nothing so generous as the benefits that administrators like Zimmer have already granted by the magnanimity of their own spirits, by the kindness of every manager who has ever said We’re only against this union because we have your best interests at heart.

“We hope all members of our community will take the time to look more deeply into the challenges and potential negative consequences of a union,” Zimmer writes. After all, it’d be a shame if anything happened to that pretty special relationship of yours. 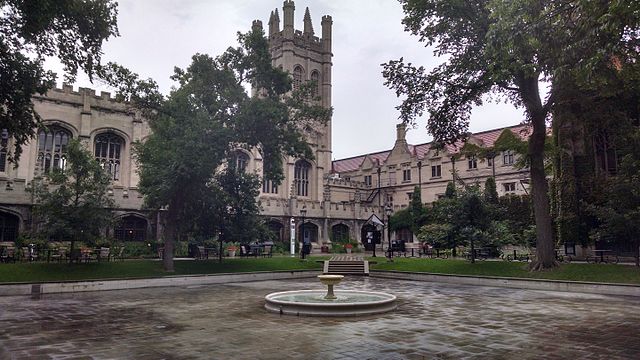