Who are you betting on to win the 2019 Nobel Prize for Literature? In fact, two prizes will be awarded, as the 2018 voting for the prize was famously deferred. According to a lengthy article in The New York Times by Mark Binelli, Gerald Murnane’s odds to win the 2017 Prize were 50 to 1, and from a betting standpoint he was considered more likely to win “than Cormac McCarthy, Salman Rushdie, and Elena Ferrante,” who were quoted at higher odds.

And how appropriate a bet would be on Murnane, as he himself is a regular punter at the horse races in his native Australia. Indeed, horse racing is an obsession with the author, as described in his Something for the Pain: A Memoir of the Turf, published in 2015.

Murnane’s best-known novels are Tamarisk Row (1974), The Plains (1982), and the recently-published Border Districts (2017). In a 1992 interview in the journal Antipodes, Murnane described his fiction as “a report of the contents of my mind.” He further states that, “My fiction is not about characters. The only personages are the citizens of my own mind.” As Binelli writes, “most of Murnane’s works are devoid of plot and character.”

However, his memoir is a straightforward narrative, full of stories about race horses and their owners, trainers, and jockeys. Current and future literary scholars might find a way into Murnane’s utterly unique mind by reading this memoir, but they will be at a disadvantage if they themselves are not familiar, or even obsessed, with horse racing. Many people, literary scholars included, might consider horse racing as a sport that consists of large animals running in a circle with small humans on their backs. This text will attempt to explain Murnane to those who do not share his obsession with horse racing.

During one of his teaching jobs, three postcards of figures Murnane idealized and identified with were the sole visual matter on the walls of his office — one of Marcel Proust, another of Emily Brontë, and the third of the race horse Bernborough. Shown in two racing positions in a field of 27 horses, Bernborough is far behind in the first image on the card, and in the second image he wins the race. An amazing feat, in that it was a sprint race, the T. M. Ahern Memorial Handicap, run in June 1946. Murnane writes in the memoir that Bernborough was born in the same year that he was, 1939, and that the horse died just before Murnane married at the age of 21.

A horse like Bernborough is always exciting to watch. Will he or she get up in time to win the race, or get stuck in traffic? Or be ridden by a jockey who fails to properly time the horse’s closing kick? Such a horse is said to drop from the clouds, coming out of nowhere to finish in front at the wire.

Murnane first knew of horse racing from the radio broadcasts that his father listened to at home. His father gambled compulsively on horses, and the family moved frequently to escape the bookies looking to collect losing bets. The son, who was named after Gerald, a racehorse, created fantasies in his mind based on the horses’ names called by the radio commentator. Even after thousands of visits to actual racetracks as an adult, it is Gerald Murnane’s recall of hearing the broadcasts as a child that triggers his visual sense of horse racing. This is not the only form of synesthesia Murname experienced when thinking about horse racing.

The narrator in Proust’s Remembrance of Things Past “sees” a certain color upon hearing a particular vowel sound of a place name. Murnane experiences a color-related, but different sort of synesthesia when he sees the racing colors of a particular owner on the back of a jockey. Seeing the black cap and orange jacket with purple sleeves worn by the jockeys who rode Bernborough, sparks Murnane’s imagining the owner of the horse to have been endowed with “quiet confidence, with dignity, and with unshakeable resolve.”

Inspired by racing colors, Murnane writes of his quest for the perfect color combination as a search for the ultimate explanation of his soul. He half-jokingly asks, “Are racing colours not half so eloquent as I’ve always believed?”

Owners choose racing colors for all sorts of reasons. They may be personal or random. On the scale of strongly identifying with the colors or not at all, Murnane would be at one extreme, but there are others who could care less. I had no doubt when I chose my own racing colors that they would be red and blue. I find the combination irresistible, but can’t really explain why. (That they happen to be the colors of my university seems incidental to me.) One owner that I know was so proud of his racing colors that he had them framed after winning his first race. The next time his horse started, his jockey was obliged to wear substitute colors. The owner neglected to order another set of his cap and jacket.

Murnane also reveals that listening to certain music compositions makes him “see” a horse race. He cites Tchaikovsky’s 1812 Overture as being “a notable and closely contested horse race.” He describes the first movement of a Schubert symphony as ending in a blanket finish — that is, with horses closely bunched together at the end of a race.

I understand his conflation of two unrelated things. My first winning racehorse, a smallish colt named Cap Sail, raced with a look of serious determination in the stretch, or so I thought. I would look at my dog Bugsy when he would run after another dog, and see the same look of determination. In my mind, two animals become one.

In the course of his memoir, Murnane conveys how much racing means to him. He can “find in horse racing more than I would ever find in any religious or philosophical system. … Racing provides me with a set of beliefs and a way of life. … Racing had as much to teach us as had Shakespeare.”

Murnane and his father differed on their approach to handicapping a race, and betting accordingly. The father tried to determine what the “smart men” were plotting, and then plunge on the horse that he thought was being set up to win the race. The son studies the racing statistics as provided in the form-plan, as The Racing Form is called in Australia. He bets amounts that he can afford to lose.

I will spend hours pouring over the The Racing Form in the attempt to find the winners in a day’s races at a particular track. Having done this for decades at racetracks all over the world, and losing more often than winning, I still approach each new day of race betting with complete optimism and confidence.

Even at my level of dedication to horse racing, I am in awe of Murnane’s claims of the importance of racing in his life. I have seen the lives of horse trainers, jockeys, stable hands, and owners up close, and know that for many of them, horse racing is their life. Murnane does not own a racehorse, or train one, but horse racing for him is something all-encompassing, and in this memoir he explains that in detail. And yet, he states, “For most of my long life, however, my enjoyment of racing has been a solitary thing, something I could never fully explain to anyone else.”

This whole book is his explanation, his speaking to the reader. But there is a disconnect between writing a memoir about his obsession with horse racing and saying he can never fully explain it. How is it that he can write, “I’ve never met and will never meet anyone for whom horse racing matters so much.” I find this disappointing. I would like to talk racing with Murnane, but I feel shut out. Is he like the otaku boys in Japan who lock themselves inside their rooms playing online games for months and years? How else to explain, except as a solitary game, the many years Murnane has spent creating “The Antipodian Archive,” a fantasy horse racing universe of 1500 invented horses and racing colors (and the races in which they compete), all within the two island countries — New Eden and New Arcady — that he has also invented.

Here we can see a connection with the third figure in Murnane’s earlier-mentioned pantheon, Emily Brontë. She and her sister Anne created imaginary islands known as Gondal and Galdine, except there were no race tracks on those islands. Murnane has written, “If it was good enough for the Brontës, for a middle-aged guy in Australia there’s no reason to think badly of what I’m doing. I’m just doing what the Brontës did.”

I remember as a child tearing off the fraying outer layer of the cardboard cover of a notebook. What remained was the jagged shape of the under layer of the cardboard cover. I gave this jagged shape the name “Yenka,” an island nation that had as its capital the city of Calva. The national flower is the Yenkan yolie, and the chief source of revenue for Yenka is the export of perfume made from the national flower.

My father, at the age of 96, remains a nonstop jokester, and like Murnane’s father, he loves to gamble. He introduced me to horse racing when I was 14 years old. Over the course of his long life, my father has asked many people if they have heard of Yenka, and if they know about its famous perfume. Some people have said that they have heard of the country, others ask how to get the perfume, and one person even claimed to have visited Yenka.

I feel an affinity with Murnane for yet another reason. He taught himself Hungarian rather late in life, and wrote a long essay, “The Angel’s Son: Why I Learned Hungarian Late in Life,” that is full of references to horse racing. Growing up, my immigrant parents spoke Hungarian to each other. This was the language I heard at home on a daily basis. My father would come home from work and routinely ask my mother, “Mi újság?” (What’s new?). Whereupon my mother always said, “semmi” (nothing).

The race track has a large population of lonely-looking middle-aged men, and sometimes that’s me, but I enjoy the company of a racing buddy, and when we are analyzing a race together, we are speaking a shared language, the language of horse racing. Charles Bukowski, an avid racegoer and bettor like Murnane, cautioned against talking to anyone at the track, lest it distract from analyzing the races and making the proper bets. But unlike Bukowski, Gerald Murnane cannot be called a deviant or a misanthrope. He had a long, happy marriage, and he and his wife Catherine often went to the races together.

The most moving and cosmic tale in his memoir tells the story of the end of Catherine’s life, and the pact they made, which was somewhat unilateral, as she never actually assented to it. The first to die would send a message from the beyond. The message to the surviving spouse would be in the form of a winning horse at the odds of 20 to one on the first Saturday after the death. As she was the first to die, he went to the races the following Saturday, and among his selections was a 20 to one horse in the Blue Diamond Stakes named Reward for Effort.

Murnane does not consider himself to be a superstitious “mumbo-jumbo man.” He made certain to mention his “pact” to a friend prior to the races. He wanted to have a witness. Reward for Effort had the lead in the stretch, and was about to be passed by a fast-closing horse.

That horse, the sure winner, choked on its tongue.

Murnane won 1000 dollars for his 50-dollar bet. Of course, the race meant a lot more than that. 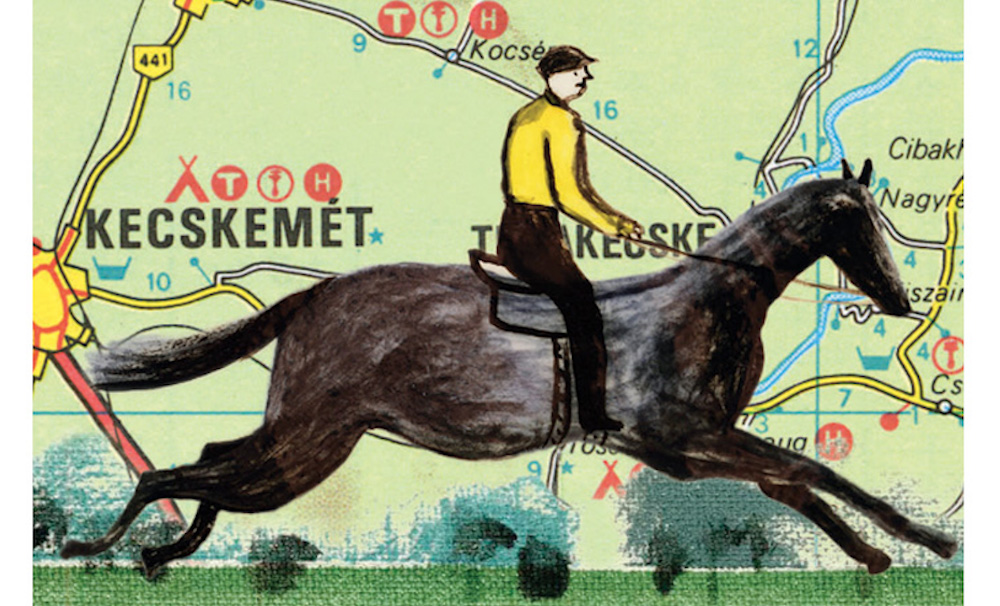