Somewhere on Interstate 80 in Nebraska, between my true home in Colorado and my current one in South Dakota, I saw a sign painted on the back of an 18-wheeler: Uncle Sam wagging a scolding index finger at me and asking DID YOU PRAY TODAY?

In fact I had prayed that morning, as I do most mornings before I get out of bed, though I couldn’t remember what for. Probably something simple, like me not dying on the road or my country not destroying itself. But I didn’t like Uncle Sam telling me I was supposed to pray because it’s way beyond his purview. Even though I’m a garden-variety churchgoing guy, I don’t want Uncle Sam leaping over the wall of separation between church and state into my religious life any more than garden-variety atheists want a platoon of ministers, rabbis, and imams to jump over that wall into their government.

There was Uncle Sam on the back of that truck, though, leaping over the wall at me. It might be more accurate to say he was burrowing under it, because America is experiencing a consistent, premeditated undermining of the separation between religion and government. Our legislatures are full of conservative “patriots” who don’t see any problem with Uncle Sam wanting us to pray, and they’re enacting policies all around the country — often in the name of a “religious freedom” that seems to apply mostly to their own faith. Policies that blend the religious and the political are piling up around us and risk putting America increasingly in the grip of the de facto public religion it has gradually embraced over the last four decades: a gun-toting, flag-waving quasi-Christianity that shines its blessings down on white supremacy and American imperialism.

It’s descending on us not like some toxic Christofascist storm, but like a slow and pervasive mist. Take, for example, what just happened in my adopted state of South Dakota. In late March, new Governor Kristi Noem signed into law Senate Bill 55, which requires that “the national motto of the United States, ‘In God We Trust,’ shall be displayed… in a prominent location within each public school… and may be no smaller than twelve inches wide by twelve inches high.”

No big deal, supporters will say, since “In God We Trust” has been our national motto since 1864 and even appears on our money. American courts have consistently rejected attempts to remove references to God in public discourse and spaces, such as in the Pledge of Allegiance and on our currency. In 2018, the 8th U.S. Circuit Court of Appeals in Minnesota ruled against an atheist lawsuit that wanted to take “In God We Trust” off our money. Those hoping to fight South Dakota Senate Bill 55 as a separation of church and state issue should expect a rough, unsuccessful time in court.

You can view this bill, if you wish, as base-pleasing gesture in a deeply red state that currently has zero Democrats holding statewide office. But similar laws have been enacted or are being considered in (at least) Nebraska, Indiana, Louisiana, Arkansas, Tennessee, Florida, Alabama, Kentucky and Arizona. They are connected to a nationwide effort by the Congressional Prayer Caucus Foundation called Project Blitz, which intends to “protect the free exercise of traditional Judeo-Christian religious values and beliefs in the public square, and to reclaim and properly define the narrative which supports such beliefs.”

The Congressional Prayer Caucus Foundation even has a how-to guide for promoting such legislation posted on Google Drive. (Guidelines for creating a National Motto Display Act, for instance, are on page 10.) The front page of this document displays the logo for the WallBuilders ProFamily Legislative Network, which is “dedicated to presenting America’s forgotten history and heroes, with an emphasis on the moral, religious, and constitutional foundation on which America was built — a foundation which, in recent years, has been seriously attacked and undermined.”

WallBuilders, huh? Why does that sound so familiar? Dig around in the agendas of organizations like these even for a moment and it becomes clear that they don’t simply want to fill our hearts with patriotic slogans. They’re after the return of “Judeo-Christian religious values” — a code phrase for a host of ultraconservative policies that smell an awful lot like the white nationalist agenda. This crowd marches through America holding up religious freedom at the head of its parade like some prized heifer. But behind it follow a whole barnyard full of policies that make South Dakota Senate Bill 55 look like the thin end of a painful, restrictive wedge. Also listed in the Congressional Prayer Caucus Foundation’s policy guidebook are plans for creating a “Resolution Establishing Public Policy Favoring Intimate Sexual Relations Only Between Married, Heterosexual Couples,” a “Resolution Establishing Public Policy Favoring Reliance on and Maintenance of Birth Gender,” and a “Resolution Establishing Public Policy Favoring Adoption by Intact Heterosexual, Marriage-based Families.”

This looks to me like a version of the Westboro Baptist Church’s pithy “God Hates Fags” mantra, only watered-down and filtered through legalese. Many values we might properly call Judeo-Christian — such as radical hospitality toward strangers — don’t get included in the vision of America that contemporary religious freedom advocates are trying to force through legislatures all around the country. What’s wrong with wanting a Christian country? these folks ask. But that question isn’t too far off from asking What’s wrong with wanting America to be for Americans? and What’s wrong with wanting America to be a white country again? Just ask Representative Steve King of Iowa, himself a longtime supporter of America’s Judeo-Christian heritage.

Thanks to people like Rep. King and his ilk, “Judeo-Christian” is such a loaded buzzword that one can barely use it today without invoking the white nationalist agenda. This agenda protects the right of Americans to legislate against gays, Muslims, atheists, and anyone else they deem insufficiently in accord with their beliefs. It is not the agenda of a first-century Jew named Jesus, but that of a narrow band of his followers who would love to make America a Christian nation.

Unfortunately, the values of this few are precisely what Uncle Sam will want us to pray for once he burrows the rest of the way beneath the wall of separation between church and state and wags his quasi-religious finger at us. The religious freedom crowd wants to Make America Judeo-Christian Again — a nice campaign slogan, though too unwieldy for a red baseball cap — and this garden-variety churchgoing guy wants none of it. I’ll stick with praying to a God who has no interest in being used as a prop to support the agenda of those who tolerate things like family separation of asylum-seekers and using Christianity to justify gun-toting xenophobia.

The Congressional Prayer Caucus Foundation and its allies will say that the “In God We Trust” movement is about nothing more than wanting to restore American patriotism — that it’s got nothing to do with religion at all. Our problem today is that people with money and a clear legislative strategy are trying to create an America in which nobody can really tell the difference between government and a nationalistic faith. Someday, I fear, I’ll be driving between South Dakota and Colorado again and see that Jesus has replaced Uncle Sam on the back of that same 18-wheeler. What will the text around his lantern-jawed, caucasian face say? GOD BLESS AMERICA? No, that would be too gentle. OUR COUNTRY, STAY OUT would be more like it. Or he might have no words at all — just an AR-15 crooked in his right elbow and a big ol’ American flag waving on the pole in his clenched left fist.

Steven Wingate’s novel Of Fathers and Fire, set during the Iran Hostage Crisis and the run-up to the Reagan presidency in 1980, was published in April 2019 by the University of Nebraska Press as part of its Flyover Fiction Series. He teaches creative writing at South Dakota State University. Visit www.stevenwingate.com. 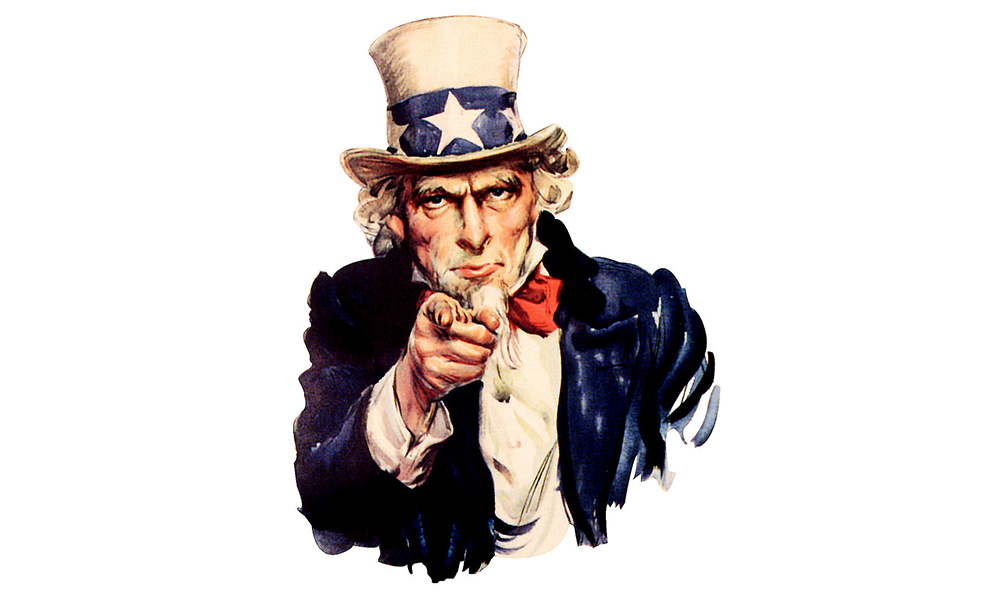