Once upon a marketing meeting, my publishers and I were brainstorming pre-order giveaway ideas for my debut novel when I offered to create a collection of cocktails and mocktails. Mixology is a hobby of mine, as my Instagram can attest. Plus, I’d already created one signature cocktail for The Gold Persimmon. What’s a few more?

“A few” quickly turned into six cocktail/mocktail pairings. I spent months drafting and mixing and making a sticky mess of the kitchen. I exhausted myself testing all the drinks in one weekend. Then I had to do it all over again. And again. But it was rewarding to mixologize with purpose: I had a chance to highlight aspects of my novel in a visceral, synesthetic way by telling readers what this story should taste like. The narrative became intoxicating, literally.

Meanwhile, I looked for ways to support other writers and their books. I’d received great advice from a Facebook group for debut authors, so at the end of May 2021, I posted an offer to craft cocktails for any of the members’ books, in any genre, for free. I included a sample photo of The Gold Persimmon cocktail and a Google Form, and that was that. I honestly didn’t think many people would sign up. I was wrong.

To begin the potion-making process, I ask each writer to choose a base alcohol, if any. I also request info on their favorite drink and food allergies. While reading the book, I observe the setting, the tone and personality of the writing, and the color themes. I note any and all food or drink references. I look for details I can build off: a character’s clothing, their perfume, possessions — a favorite doll or a stone in their pocket.

I also jot down ideas on how to stage the photo. The way I present the cocktail tells a story about my experience with the book, and I want to tell it right. Objects from around my house or yard find their way into the resulting photos: my clothes provide fabric for the base, while my kitchen offers up tinfoil and various platters or cutting boards. As the project has progressed, I’ve grown more creative with the sugar in my cupboard, using food coloring to produce a variety of hues. I’ve dipped moons and stars cut out of paper and slathered in glue in ramekins of blue sugar. I’ve discovered if you drop food coloring into a container of sugar and allow it to congeal, you can form crystalline tear drops, or glittering droplets of blood, depending on the book. I also make props out of Sculpey clay: flowers, pomegranates, teeth. For edible sculpted garnishes, I use marzipan. I’ve learned how to turn strawberries and cucumbers into roses.

To date, I’ve crafted 28 cocktails or mocktails, plus those I designed for my novel, The Gold Persimmon. Though I plan to start pacing myself, I will keep churning out the booktails and sharing the recipes in my newsletter, “The Cauldron”, where I’ve featured some of the following favorites. Cheers! And happy reading. Annie and the Wolves by Andromeda Romano-Lax

If a book were a building and a writer its architect, this historical-but-not multi-narrative novel would be a masterpiece on par with the Guggenheim. Historian Ruth McClintock is obsessed with Annie Oakley, a fixation deepened by a fateful accident, one that parallels a harrowing experience in Oakley’s own life. When Ruth starts having visions, she begins to understand the mysteries of Oakley’s past, including her practice of a kind of psychic time travel. But there’s another event on the timeline, something dark that’s not happening in the past, but the future.

Annie Oakley was sharp, talented, and a teetotaler. This mocktail is elegant in a way she would appreciate, with a bit of tartness and fizz, perfect for a picnic of any era.

Annie and the Wolves

Prepare the strawberry syrup. Once it’s cool, add ice, both syrups, and lemon juice to a cocktail shaker. Agitate vigorously. Strain into a martini or coupe glass and top with sparkling water. Garnish with a sprig of mint.

Stir together all ingredients in a small pot. Cover and bring to a boil, then uncover and simmer for 15–20 minutes, stirring occasionally, until the fruit is soft. Remove from heat and let cool. Strain into a clean jar and keep refrigerated. Moonflower, Nightshade, All the Hours of the Day by JD Scott

This is a startling, surreal, and strangely beautiful collection of fabulist queer stories and one novella, (where the world has turned into a giant, ever-growing shopping mall, with dangerous magic along the borders.) Moonflower’s nomination for a Shirley Jackson Award, a much-deserved honor, inspired this refreshing booktail.

The florals in this cocktail complement the book’s botanical imagery and themes, while the absinthe lends an eerie opalescent sheen. The combination is entrancing and a little bit dangerous, just like the collection.

I presented this drink atop a moon-like marble platter dusted with lavender and blue sugar. The phases of the moon in the background are also rendered in blue sugar.

Moonflower, Nightshade, All the Hours of the Day

Combine gin, absinthe, lavender, elderflower, and lemon in a shaker with ice. Agitate vigorously, until shaker turns frosty. Strain into a champagne flute or coupe glass and top with champagne.

Stir all ingredients together in a small pot. Cover and bring to a boil. Simmer for 15-20 minutes uncovered, stirring occasionally. Set aside to cool, then strain into a clean glass or jar. Keep refrigerated. This novel is a feat of time travel, carrying us from colonial America — where two brothers (one of them a faun) wander, spreading apple seeds — to a not-so distant future that climate change has rendered hot, dry, and mostly dead. A corporation controls the world, but a team of survivors has a plan. Then we hurtle even further into a future where the world is a barren snowy wasteland in which a lone creature meanders about in a shuttle, bearing seeds of possibility.

Each layer of this cocktail is apple based. I added some sugar to bring out those flavors but stayed true to the apple’s bitter origins. Speaking of, Laird’s Apple Brandy is supposedly the original Applejack. The apple syrup employs some classic apple pairings like honey, cinnamon and clove. Pomegranate juice adds bitterness and unites the Greek, Christian, and American mythologies woven throughout the novel. Hard cider, that staple of early American life, provides bittersweetness. Honey makes another appearance in the honeycomb garnish, a product of those life-giving bees upon whom the fate of the world rests. At the center is a frozen apple to keep the drink fresh and cold.

In presenting this booktail, sugar snow dusts the apples in the background, while “genetically-altered” sliced apples, dyed red and blue, complement the book’s cover.

¼ of a sweet apple, sprinkled with brandy and frozen

Square of honeycomb to garnish (optional)

First, cut a small apple into quarters, removing the core. Sprinkle with Laird’s, wrap in cellophane, and set in the freezer for 2-3 hours. Place a rocks glass to chill in the freezer as well. Next, prepare the syrup. Once the syrup is cool, set the frozen apple chunk in the cold rocks glass. Pour in the apple brandy, syrup, and cider. Garnish with a speared square of honeycomb, if desired.

Stir all ingredients together in a small pot. Cover and bring to a boil, then set heat on low and simmer uncovered for 10 minutes, stirring occasionally. Remove from heat and let cool. Strain the liquid into a clean jar or bottle. If more volume is desired, mash the remaining fruit and mix the pulp with a little warm water, then strain again. Refrigerate after use. With Teeth by Kristen Arnett

Sammie is really, truly trying to become a devoted mom who can “do it all.” But she cannot shake the feeling there’s something not quite right about her son — her son who bites. And carries around a gold-painted doll as his “twin.” As Sammie hordes secrets about what’s really goes on with her child, it becomes clear her perception of reality is seriously skewed. There’s something irresistibly unhinged about Sammie’s psyche, her marriage, and the Florida setting itself.

For this booktail, I was eager to do something weird that would say “Florida” in its vibrance, yet remain slightly swampy. I looked for a way to honor the references in the novel to various beverages — not just booze, but a range of Slurpees, slushies, and sodas, including Mountain Dew. Finally, I wanted this cocktail to show some initiative as a grown-up drink, but not take itself too seriously.

In the presentation of this booktail, handmade clay teeth are featured alongside the bright, juicy fruit framing the flute. A marzipan tooth garnishes the glass.

In a shaker, muddle the lime, cucumber, and orange slices until juicy and pliant. Add ice, tequila, and lime juice. Agitate vigorously until the shaker turns frosty. Strain the liquid into a champagne flute and top with the Mountain Dew and melon liqueur. Garnish with a cucumber wheel, or a marzipan tooth. The Body Scout by Lincoln Michel

In this futuristic dystopian noir, set in what’s left of New York City, Kobo is a baseball scout hunting for athletes. In this world, the teams are owned by Big Pharma and the players are so genetically altered they’ve become veritable juice boxes of mystery chemicals. Kobo’s own brother-from-another-mother is a star of the Monsanto Mets, until he dies a bloody death at the plate on live television. Kobo’s quest to find the killer will cost him his apartment, his safety, and his body — including a cybernetic arm — but with an impending avalanche of body modification debt already threatening to crush him at any moment, what does Kobo have to lose?

The setting prompted me to riff off one of my favorite cocktails, the Manhattan. Instead of sweet vermouth, I opted for red vermouth (which looks a little like blood) and homemade plum syrup. Plum wine, known as umeshu in Japan, is made with steeped plums and shochu. It is the beverage Kobo enjoys briefly in an early scene at a sushi restaurant, before being incapacitated and thrown into a tail spin. I added a hint of habanero to the syrup for “Mextexan” flavor. Fennel bitters are a nod to the nation state of “Franco-Germany,” fennel being a popular ingredient in French cuisine.

This booktail is the center of a tableau of “sashimi” — miniature edible organs (a foot, a heart, and a pair of lungs) made from marzipan. The platter is garnished with sliced plums and plum and cucumber roses. The dipping sauce, red as blood (food coloring and soy sauce) has spilled over, a hint at the violence underlying these creepy treats. Finally, the cocktail is served in a diamond glass from Dragon Glassware, a reference to the game that started it all.

Add the bourbon, syrup, vermouth, and a few drops of bitters to a mixing glass with ice. Stir until well-chilled. Strain into a cold glass.

1/8th inch piece habanero pepper (try a tiny piece first to see how spicy it is. If it’s super picante, use less)

Slice the plums into halves or quarters and remove the pits. Stir together sugar, water, cinnamon, and fruit in a small saucepan. Bring to a boil, uncovered. Remove from heat and let stand 20 minutes. Strain and allow to cool completely, then store in a jar or bottle and keep refrigerated. 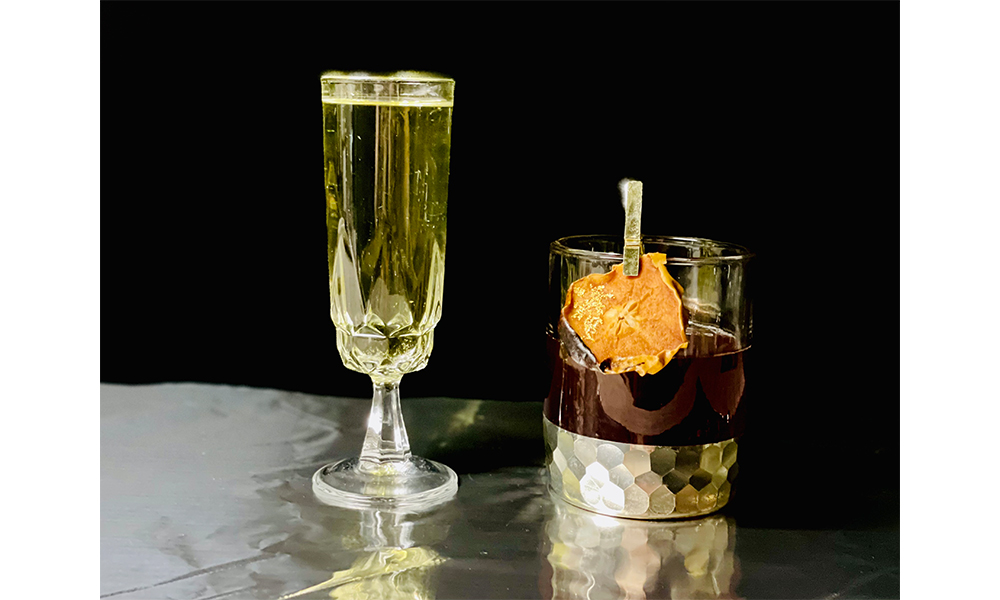